When logging on to your classic fantasy football site, there is one secret to consistently getting value — exploiting the default site rankings. The easiest way to do that is to compare each respective site’s default rankings against the combined PFF Draft Rankings.

Note: Rankings are .5 PPR scoring and were updated August 19th. They are subject to change. 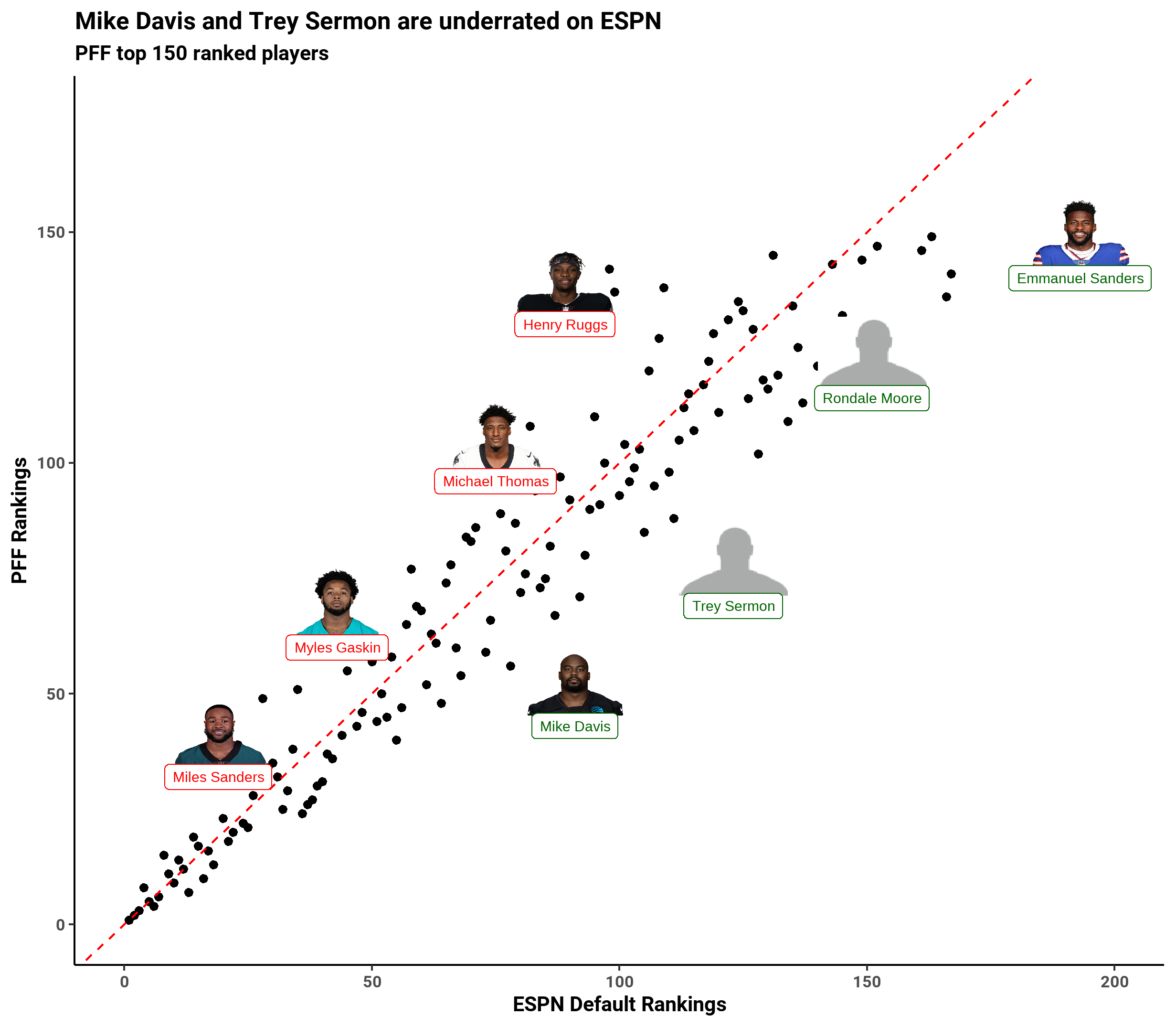 The most significant early pick that differs from PFF’s rankings is Philadelphia Eagles running back Miles Sanders. He’s getting targeted almost two rounds too early according to ESPN's current rankings. The third-year running back has yet to eclipse 900 rushing yards and his perceived receiving upside took a big step back last season. Also, with Kenneth Gainwell and Boston Scott expected to collect a decent chunk of opportunities, Sanders just can’t be seen as a safe play so early in drafts.

Another running back who has taken a hit in value recently is the Miami Dolphins‘ Myles Gaskin. His preseason appearance did not provide much assurance for a large role, as running back Malcolm Brown played more snaps with Miami's first-team offense.

Can Mike Davis still put up RB1 numbers in fantasy this season? pic.twitter.com/X0LMP8BYXD

As far as running backs go, the value selections on ESPN are the Atlanta Falcons‘ Mike Davis and San Francisco 49ers‘ Trey Sermon. Davis is ranked only 11 spots behind Sanders by our staff but is hidden in ESPN’s rankings down at 91 overall. Sermon is another sneaky play, especially if you are going wide receiver heavy in the early rounds.

There is a fairly common theme among all these sites that New Orleans Saints wide receiver Michael Thomas is still not priced correctly, so you should let your opponents grab him unless he falls considerably. 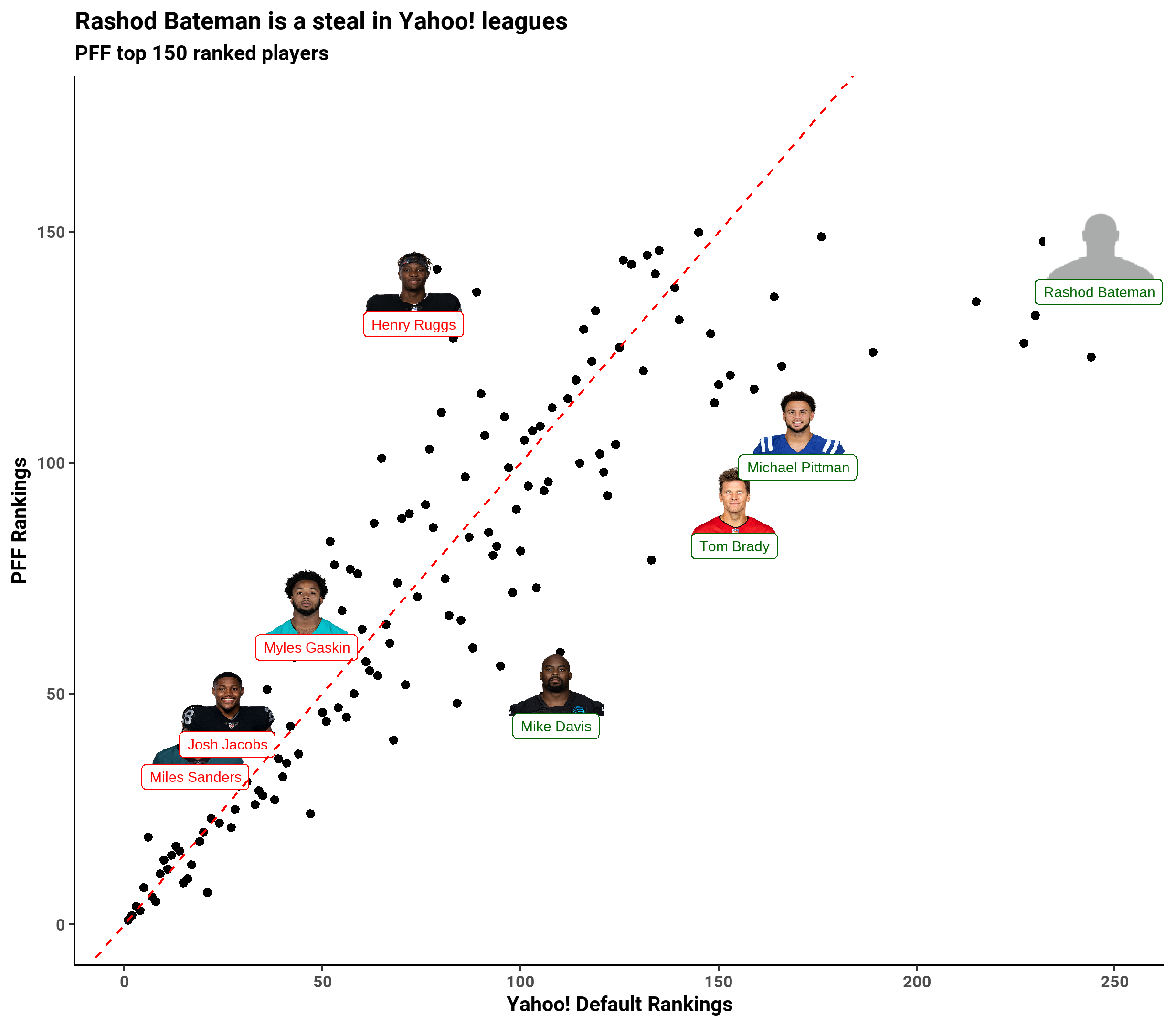 Over on Yahoo’s rankings, we see the same theme with some of the earlier running backs, but the Las Vegas Raiders‘ Josh Jacobs pops out as a risky pick at his current cost. The recent Kenyan Drake injury news appeared to be a catalyst for Jacobs to get a top-end workload again, but Drake is already back on the field and will likely siphon significant passing work from Jacobs.

#Raiders running back Kenyan Drake left yesterdays practice early but he’s back out there and looks ready to roll pic.twitter.com/niXdYRd7ee

Tampa Bay Buccaneers quarterback Tom Brady sticks out as a good value if you want to chase a middle-round discount at quarterback. However, if you look at the values table below, you will see many later round quarterbacks are going to be on the board during your last few picks.

While there are certainly red flags for both receivers, the Indianapolis Colts‘ Michael Pittman Jr. and Baltimore Ravens‘ Rashod Bateman are severely undervalued by Yahoo’s rankings. Bateman is currently the 246th player on their default draft rankings, which is absolute lunacy. Even if he misses some time, he is likely to pay off value if drafted in the late rounds.

Raiders wide receiver Henry Ruggs is listed as a fifth- or sixth-round wide receiver on Yahoo at the moment — a considerable overpay based on PFF’s rankings. With the potential emergence of receiver Bryan Edwards and the existence of tight end Darren Waller, it would be extremely rare for Ruggs to pay off here. 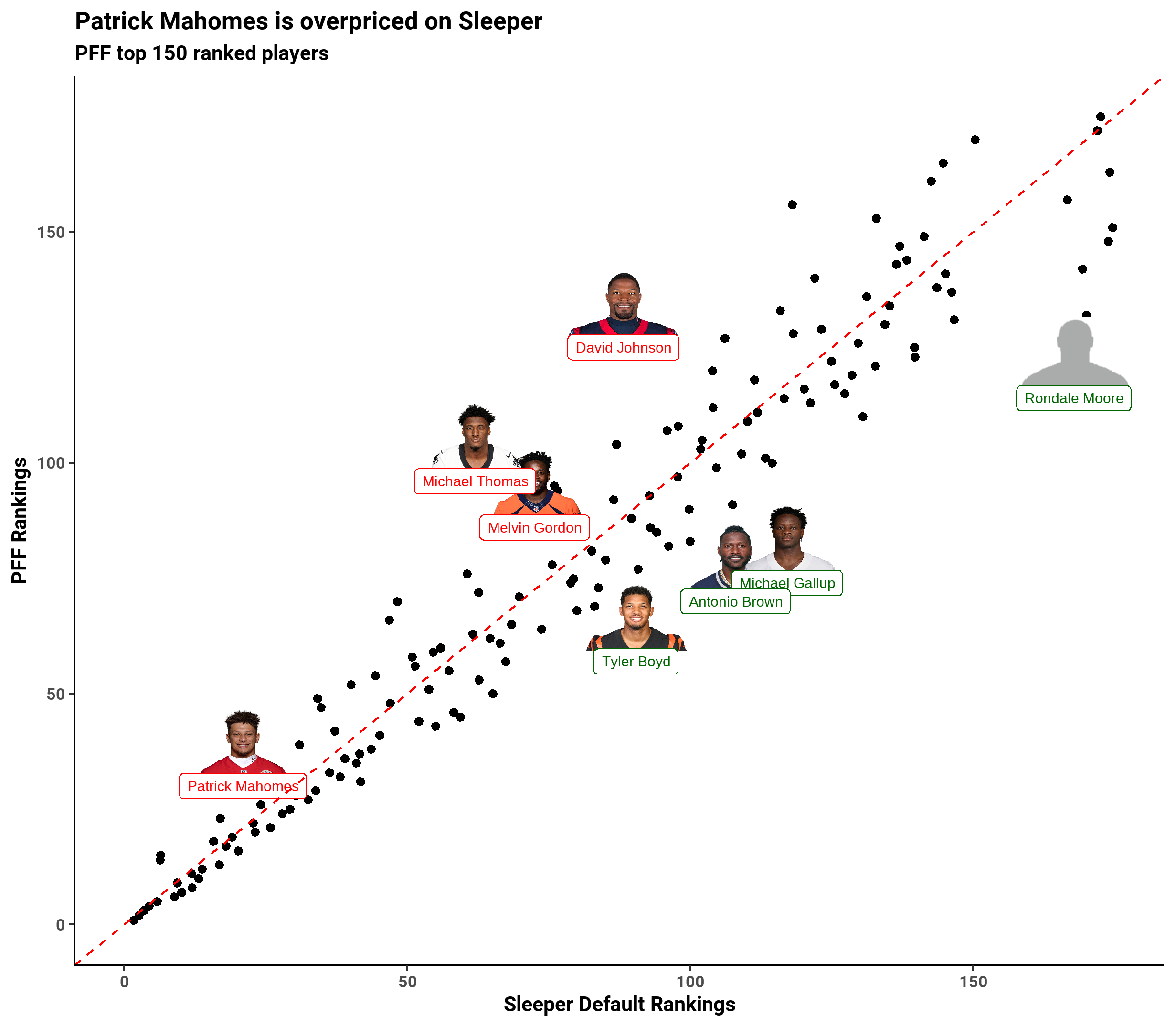 Sleeper uses mock average draft position (ADP) for its default rankings, this ADP is as of August 17. Sleeper is the only platform of the three in this article where Kansas City Chiefs quarterback Patrick Mahomes is overpriced and not likely worth the cost relative to PFF’s rankings. However, it should be noted that the late-round quarterbacks aren’t priced quite as soft as ESPN or Yahoo, so if you have a guy you want in the mid/late rounds, grab him as soon as you are comfortable.

The value plays on Sleeper are all wide receivers. The Cincinnati Bengals‘ Tyler Boyd gets his first mention, as drafters on Sleeper have likely pushed in the chips on fellow Bengals receivers Ja’Marr Chase and Tee Higgins. Cincinnati's receiving corps are more ambiguous than the drafting market would indicate, and Boyd represents a good arbitrage play here. Both Buccaneers wide receiver Antonio Brown and Dallas Cowboys wide receiver Michael Gallup represent a similar arbitrage play as well versus their more expensive counterparts.

Arizona Cardinals receiver Rondale Moore could be a late-round gem this season, and both Sleeper and Yahoo will allow you to grab him later than our rankings would dictate. However, he could easily see a small role to start the season, which should temper expectations considering the cost.

“The impact he’s going to have on that offense is going to be massive”@pff_mike is all in on the Cardinals rookie WR Rondale Moore pic.twitter.com/26W6JMPj1a

Both the Denver Broncos‘ Melvin Gordon III and Houston Texans‘ David Johnson land squarely in the ‘running back dead zone,’ and if you draft them on Sleeper, you are probably drafting them one or two rounds earlier than necessary. In fact, Sleeper’s rankings seem to give extra value to the wide receiver position and reduce the value given to running backs. Grabbing running backs in the first few rounds then hammering receivers is the smart play in Sleeper re-draft leagues this season.