Leverage PFF’s NFL wild-card weekend fantasy football rankings and DFS ownership projections as close to lock as possible. Knowing what your competitors are going to do ahead of time provides an edge that simply not enough DFS gamers take advantage of. Focus your attention in cash formats on high-rostered value players and pivot to lower-rostered ceiling players in GPPs.

Last week’s process led to a Tom Brady, Rob Gronkowski and Mike Evans double stack along with going all-in on Tyler Lockett as the Seattle Seahawks’ wide receiver to target for a blow-up game.

Enjoy the first DFS slate of the 2021 playoffs! 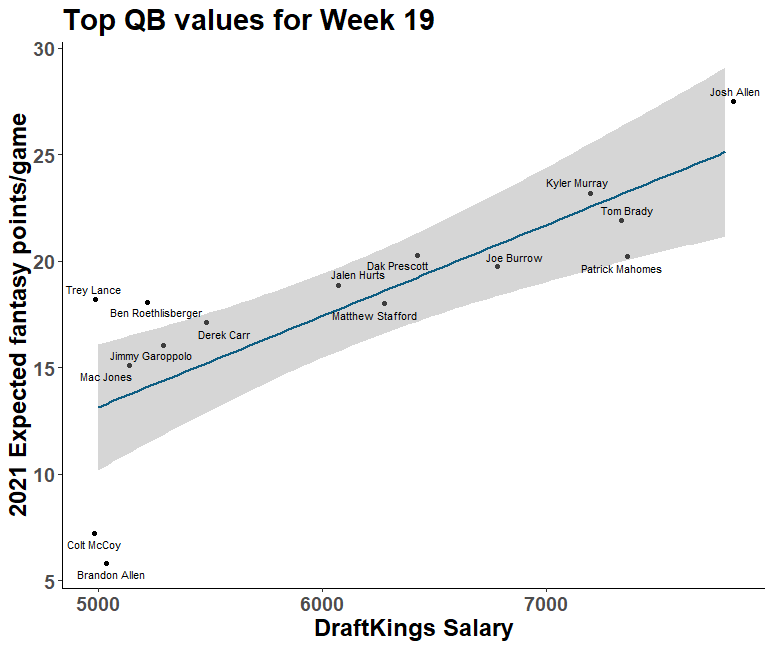 In terms of matchups that are projected to be high-scoring based on the offensive pace of play over the last six weeks: Eagles-Buccaneers (ninth vs. fifth), Bills-Patriots (first vs. 23rd), Rams-Cardinals (20th vs. fourth) and Cowboys-49ers (sixth vs. 30th).

PHI-TB, weather permitting, is the top game for stacking, but the other games that feature one high-paced offense versus another have a chance to become shootouts if the fast team jumps out to a lead and pushes the slower team. Keep that in mind when building stacks around players in those games.

The Arizona Cardinals, Buffalo Bills and Dallas Cowboys don’t necessarily need the opposing offense to post high-end numbers for them to produce fantasy production; although, the same cannot be said for their opponents.

Allen is very expensive despite the tough matchup/frozen tundra game conditions, so I’d look elsewhere if he is highly-rostered. I’ve been adamant about taking the under on his passing yards prop, as he has not eclipsed 250 passing yards at home since Week 3.

He has, however, been unleashed as a rusher, averaging nearly 65 rushing yards and nine carries per game over his last six. His running ability is exactly why he is averaging 27.5 expected fantasy points per game — nearly four points more than the next QB (Murray, 23.2).

I like him much more on the Saturday-only slate because he is the only quarterback who offers juice with his legs, which helps set him apart drastically from the field.

I prefer Brady over Mahomes at $100 less because the projected game environment heavily favors the Buccaneers QB. Eagles-Buccaneers has all the ingredients to be a shootout, whereas KC-PIT could turn into a Ben Roethlisberger-led slogfest. Gross.

The Pittsburgh Steelers’ greatest weakness is against the run — most rushing yards allowed since Week 3 — so it would also make sense for Kansas City to try and establish its ground game. A strong rushing attack would help neutralize the soon-to-be defensive player of the year, T.J. Watt.

Murray has averaged 22.5 DraftKings points in his two previous matchups against the Los Angeles Rams this season. He’s also performed slightly better on the road versus at home (24.7 vs. 21.0), which bodes well for him to continue his high-end production this week. Inside a dome against the Rams, Murray's passing ceiling is higher than Allen's this week.

The Rams allowed over 300 passing yards to four different QBs — including Murray in Week 14 — since their Week 11 bye. They also recently signed veteran safety Eric Weddle after losing starting safety Jordan Fuller. The other starting safety, Taylor Rapp, is in concussion protocol. Needless to say, there’s a high probability that the Rams allow chunk passing plays if they are without their two starting safeties.

Burrow could easily go off against the Las Vegas Raiders’ Cover 3 defense, as the Bengals quarterback is PFF’s second-highest-graded thrower versus that scheme this season. However, the way that the Bengals deploy their offense based on defensive matchup — the Raiders pass defense ranks second in lowest explosive pass-play rate allowed — suggests that they may opt to rely on their rushing attack in the first round of the playoffs.

They did as much the last time they played the Raiders, feeding Joe Mixon 30 carries. Also, fading Burrow in the first game provides so much flexibility with information-based late-swapping for Sunday’s games.

If anything, play Burrow on FanDuel instead, as he is much more affordable at $7,800.

This may sound surprising, but Jalen Hurts is the cash-game quarterback at $6,100. The 2021 QB6 overall in fantasy points per game has never been this cheap, so he is the premier pay-down option. In addition to his individual rushing ability, the matchup against Tampa Bay almost guarantees that Hurts’ passing ceiling will be well within reach. No team has faced more passing attempts than the Bucs.

Dak Prescott ($6,400) is taking on a defense in the wild-card round that should force him to throw more than usual. The San Francisco 49ers rank sixth in pass-play rate faced since Week 10, ensuring that the Cowboys’ path to points comes through the air. Prescott has been red-hot over the past three weeks, averaging 22.3 fantasy points per game.

If it weren’t for the weekly boneheaded interceptions, Matthew Stafford ($6,300) would be an easy lock-button play for in DFS this week. The matchup is to-die-for, as Arizona ranks fourth in fantasy points allowed to quarterbacks since Week 15 and last in passer rating allowed since Week 14 (130.2).

Stafford’s good for 18-20 fantasy points, but that might not be enough to win a DFS tournament, especially when it comes to making the correct decision won a second stacking option alongside Cooper Kupp.

The only quarterback worth considering below $6K is Jimmy Garoppolo ($5,300). He’s PFF’s top value quarterback because there’s an easy scenario where Prescott gets up big on the 49ers’ defense, which would force Garoppolo into action.

With so many talented playmakers at his disposal, nobody will be surprised when Garoppolo “distributes” for 300 passing yards and three touchdowns against the Dallas defense, which ranks 31st in yards after the catch (YAC) allowed per reception this season. YAC is Kyle Shanahan’s bread-and-butter. 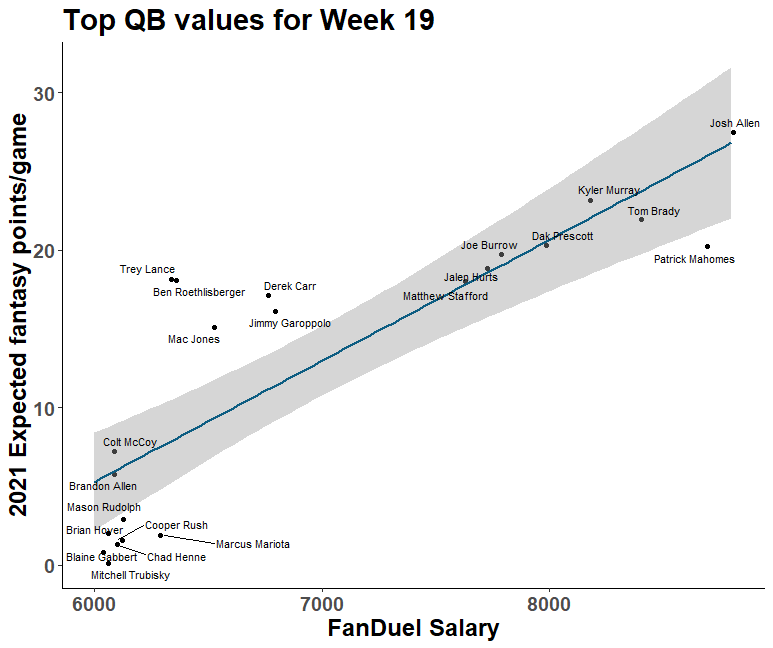