Green Bay, Wisconsin, USA; Green Bay Packers wide receiver Davante Adams (17) reacts after catching a pass for a first down in the fourth quarter during the game against the Tennessee Titans at Lambeau Field. Mandatory Credit: Benny Sieu-USA TODAY Sports

Leverage PFF’s fantasy football rankings and DFS ownership projections as close to lock as possible. Knowing what your competitors are going to do ahead of time provides an edge that simply not enough DFS gamers take advantage of. Also, be aware of the GPP-contests you are playing. Take a look at the winner’s lineup each week and take note of the roster construction.

Related content for you: Week 7 WR/CB mismatches and shadow coverages to leverage in DFS & fantasy football leagues via Ian Hartitz

Using a mid-range priced quarterback with relatively high expected fantasy points per game has been the leading indicator of the next GPP-winning quarterback, especially when they are facing an opposing quarterback who also fits similar criteria.

In terms of matchups that are projected to be high-scoring based on offensive pace of play, Titans-Chiefs, Panthers-Giants and Dolphins-Falcons rank above the rest on the main slate. 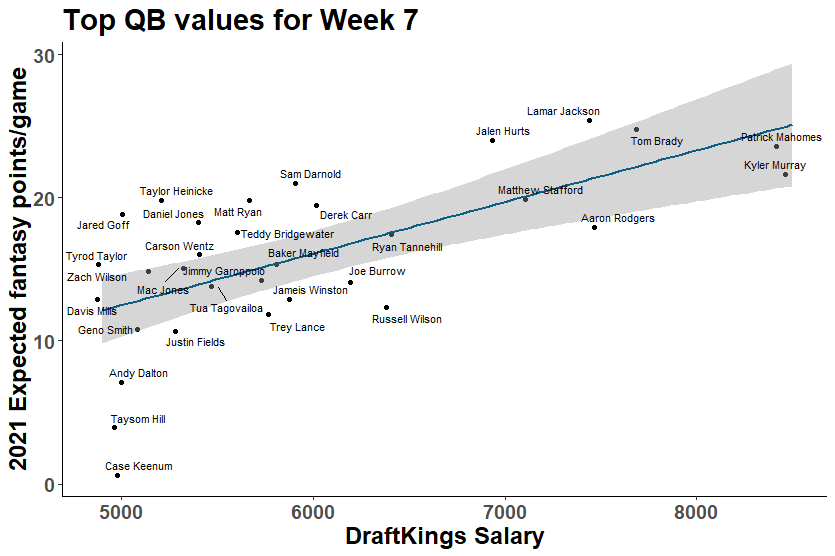 In cash formats, it's all about going back to Hurts at $6,900. The Philadelphia Eagles quarterback has scored at least 21 DraftKings fantasy points in every game he has played, and he’s been a top-12 overall finisher in his nine full games played as a NFL starter. Hurts is about as bulletproof as you can get in cash formats because of his rushing equity — 50 rushing yards per game.

But in tournaments, we are paying up to $8,400 to run it back with the fantasy football QB1 through six weeks, Patrick Mahomes. Nobody has been able to top his 27.3 fantasy points per game, and he should be set for at least 30 points versus a languishing Tennessee Titans defense that ranks second-worst in fantasy football points allowed to quarterbacks.

For $1,000 cheaper, grab the NFL’s No. 2-ranked quarterback in expected fantasy points per game, Lamar Jackson. He looks primed to bounce back in a massive AFC showdown versus the Cincinnati Bengals.

Jackson has averaged a whopping 26.9 fantasy points per game over his last two, which is actually under his expected output (30.9). Last week’s disheartening fantasy performance — season-low 11.8 fantasy points — should lead to Jackson’s rostership percentage decreasing from Week 6 (19.5%).

Stafford should absolutely rip the Detroit Lions to shreds, as they rank last in explosive pass play rate allowed, last in yards per attempt, last in passer rating and first in deep-ball rate faced. It’s the best matchup a quarterback could ask for. Get exposure to him at $7.1K. If $200 can be found, he’s probably worth grabbing him over Hurts.

Ryan Tannehill ($6,400) is the cheapest way to gain access to the contest with the highest projected point total on the slate. His 3.3% projected rostership makes him the perfect underrated option in a game filled with other extremely popular players.

The Titans passer should have an additional 200 passing yards and 2.4 passing touchdowns attached to his numbers. Look for him to hit a season-high in fantasy points versus a Chiefs defense that ranks last in fantasy points allowed to quarterbacks this season.

Through four weeks, the Bengals ranked just 32nd in plays per game (51). However, over the past two weeks — excluding OT — they rank 17th (63). There should be offensive fireworks on both sides.

The Ravens rely heavily on Cover 1 and Cover 3 in their secondary, and Burrow is PFF’s highest-graded quarterback (92.7) when facing it. He also leads all quarterbacks with 11.0 yards per attempt against the scheme.

Ryan ($5,700) and Tagovailoa ($5,500) are going head-to-head in a sneaky shootout. Neither defense has shown it can stop anybody, creating a situation where both quarterbacks could perform above expectation. Neither is garnering much rostership, making this a game to target for large-field GPPs.

I’ve got Ryan ranked ahead in my Week 7 fantasy football rankings, so he's the target for $200 more.

Jones is also an intriguing prospect playing in what should be another fast-paced game environment. He’s the No. 1 value quarterback at cost based on PFF’s fantasy projections in the DFS optimizer.

But, the cheapest quarterback in play is Justin Fields ($5,300). The rookie quarterback doesn’t pop off in the data visualization because of how ineffective he has been as a fantasy asset, but Week 6 showed signs of promise.

Because Chicago was trailing against a formidable opponent, the offense was forced to call more pass plays, which led to the Bears' pass-rate increasing to 61% on early downs — a far cry from their average (41%) across the previous three weeks.

The surge in dropbacks also created more opportunities for Fields to take off and run, as all of his rushing yards came on scrambles.

No team has faced a higher percentage of pass plays than the Tampa Bay Buccaneers this year (77%), which sets the stage for Fields to have his best fantasy outing to date. Also helping Fields’ outlook is the fact that Tampa Bay has allowed the seventh-most fantasy points to quarterbacks this season. 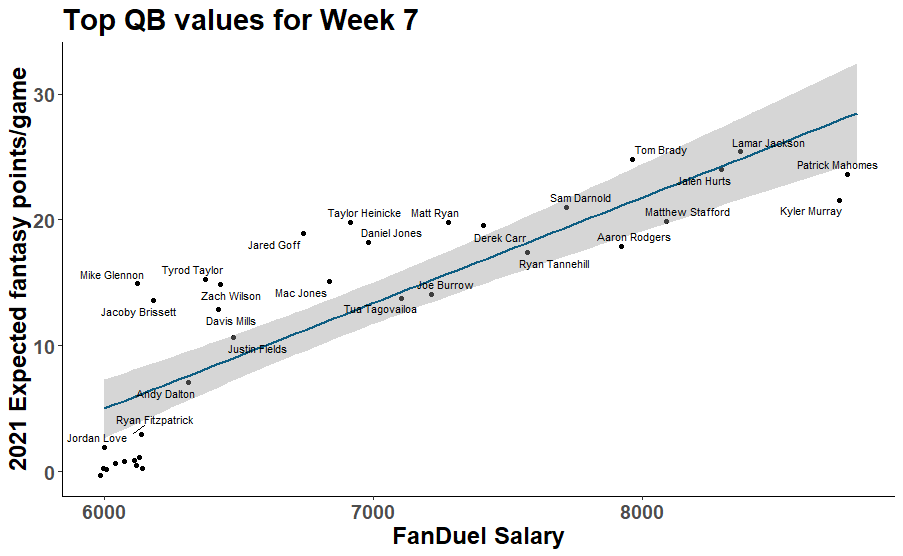