If you want to win a DFS tournament, it’s essential to leverage PFF’s DFS ownership projections. Knowing what your competitors are going to do ahead of time provides an edge that simply not enough DFS gamers take advantage of.

What you’ll unearth is plenty of players across all positions that rank high in PFF’s fantasy projections and fantasy football rankings but boast low rostership percentages. So, contrary to popular opinion, you don't need to galaxy-brain sub-1% rostered players that don’t stand a chance to sniff a winning lineup.

Instead, identify the 5-10% rostered players that show out in high-value opportunities, rankings, expected fantasy points and usage to build the backbone of your GPP lineups.

That’s what the winner of the DraftKings NFL $1.75M PLAY-ACTION contest did when he/she built a team that featured five players with sub-10% rostership. Three players in that lineup — Najee Harris, Mike Williams, Tyler Higbee — were identified in last week’s DFS cheat sheet.

Related content for you: Week 4 WR/CB mismatches and shadow coverages to leverage in DFS & fantasy football leagues via Ian Hartitz

So who’s the quarterback to target for Week 4? Dak Prescott.

The Dallas Cowboys quarterback ranks fourth in expected fantasy points per game but is underpriced at $6,700. He takes on a Carolina Panthers defense that has yet to be tested by a true elite signal-caller, and it will have to do so without first-round rookie cornerback Jaycee Horn, who has allowed the league’s third-lowest passer rating in coverage this season. 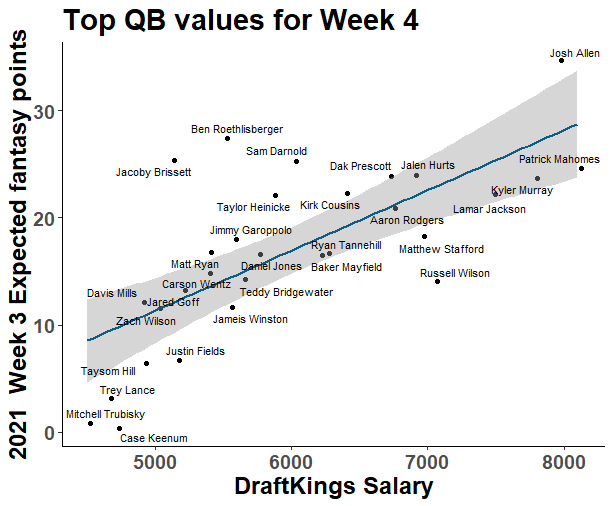 Allen is also in strong consideration at $8,000. My No. 1 ranked quarterback for Week 4’s 29.2 expected fantasy points per game ranks nearly two points ahead of the next closest quarterback, and he’s actually underperformed versus expectation three weeks into the season.

Look for Allen to gain ground on meeting his extremely high standard versus the Houston Texans as a 16.5-home favorite. It’s the second-best quarterback matchup, per PFF’s strength of schedule tool, and Buffalo throws more than nearly every other team. The Bills' 47 passing attempts per game rank third behind only Las Vegas and Tampa Bay.

The other standout sub-$7K quarterback is Jalen Hurts, who showed on Monday night that he can rack up fantasy points even when the game is out of reach. He ranks second in the NFL in quarterback rushing and gets to take on the Kansas City Chiefs, who have allowed the most rushing yards to quarterbacks this season.

Baker Mayfield looks like a great option in the sub-$6.5K range because of the sneaky high-scoring environment in the Cleveland Browns–Minnesota Vikings game. 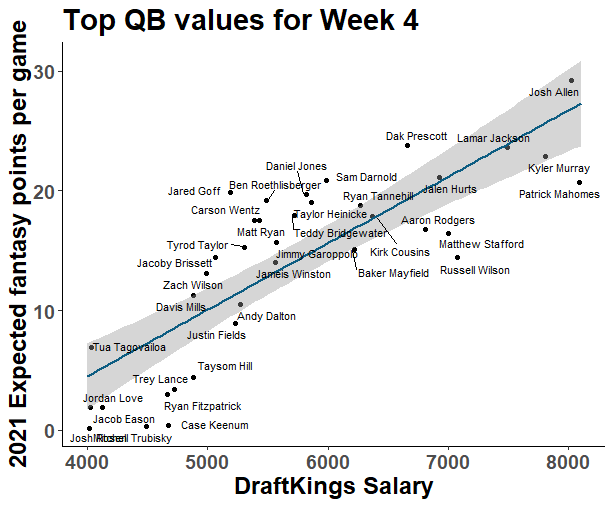 I’m a sucker for revenge game narratives and cheap mobile quarterbacks. So naturally, Jacoby Brissett gets a mention here at just $5,100 because of what he displayed last week ahead of a reunion matchup versus his old team, the Indianapolis Colts.

The backup flashed the entire package of what DFS gamers should want in a low-salaried signal-caller and should not be overlooked in a plus-matchup. Indy has allowed the highest passing touchdown rate this season and ranks 28th in yards per pass attempt.

Also, give Justin Fields another shot if he starts. The mobility and arm talent are still there, and the matchup versus the Lions defense is vastly superior to what he faced a week ago in Cleveland.