Leverage PFF’s Week 14 fantasy football rankings and DFS ownership projections as close to lock as possible. Knowing what your competitors are going to do ahead of time provides an edge that simply not enough DFS gamers take advantage of. Focus your attention in cash formats on high-rostered value players and pivot to lower-rostered ceiling players in GPPs.

The chalk was all over the cheap tight end Foster Moreau, so the natural move in Week 13 tournaments was to pay up for tight ends such as George Kittle and Dallas Goedert.

In terms of matchups that are projected to be high-scoring based on the offensive pace of play: Baltimore Ravens–Cleveland Browns (one vs. 22nd), the Tampa Bay Buccaneers–Buffalo Bills (fourth vs. sixth) and Dallas Cowboys–Washington Football Team (third vs. fifth). 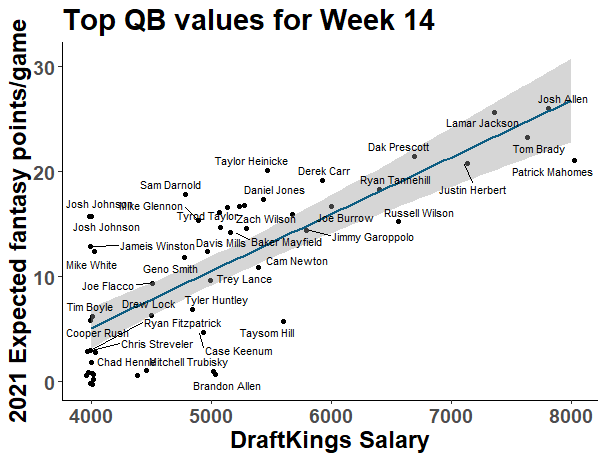 For cash games, the primary pay-up options are Josh Allen ($7,800) and Tom Brady ($7,600). The 53.5-totaled game has all the ingredients to become a shootout where both quarterbacks should easily surpass 20 fantasy points. For GPPs, I would lean toward Allen over Brady because there is almost no scenario where Buffalo puts up 30 points and Allen is not the main contributor.

The same isn’t necessarily true for Brady, as we saw two weeks ago when the ground game dominated the Colts defense. Buffalo has one of the worst defenses at defending the run lately, so it’s not hard to imagine Tampa Bay following suit.

However, if Brady’s projected rostership stays at 6%, you need to be all over him in large-field tournaments. The same goes for Patrick Mahomes ($8,000), who people seem to be shying away from despite his near 40-point fantasy performance the last time he faced the Raiders. Las Vegas doesn’t play Cover 2 defense, so Mahomes should not be overlooked.

But for the second straight week, my favorite QB has to be Lamar Jackson ($7,400). The Ravens quarterback is simply too talented to continue underperforming. In fact, he has the most fantasy points scored under expectation in his last three games (-22). His 23.5 expected fantasy points per game rank first among all QBs over that period.

It’s just a matter of time until his production regresses back to the mean.

I understand why Dak Prescott is so popular at $6,700 versus a defense that ranks last in fantasy points per game to QBs this season. However, Washington's numbers are seriously inflated due to its terrible start to the season. The Football Team defense has not allowed over 250 yards passing or more than two passing touchdowns to any quarterback since Week 7.

At $5,600, we have our cash quarterback in Taysom Hill. The cover boy for my Week 14 start/sit article finished as the QB3 in Week 13 with 25 fantasy points.

It wasn’t necessarily pretty, as Hill threw four interceptions while playing with a mallet finger injury, but he more than made up for his accuracy woes with over 100 rushing yards.

Hill has averaged 22 fantasy points in his five starts dating back to last season, so he is a no-brainer cash-lock fantasy quarterback option in a layup matchup versus the New York Jets. It's the No. 2 matchup for quarterbacks this week, per PFF’s strength of schedule tool.

Gardner Minshew II diced New York up as a top-10 quarterback one week ago, so Hill should have no problem finding fantasy success.

Cam Newton ($5,400) is the cheapest quarterback I’d pivot to. He looked atrocious before Carolina's bye week, completing just five passes on 21 attempts, but a matchup against the Atlanta Falcons‘ defense makes him a perfect GPP quarterback.

The Falcons rank fourth in fantasy points per game allowed to quarterbacks over the past four weeks.

Chances are Newton finishes either as the QB5 or QB30 — like the past two games — which is why he is so enticing for DFS purposes. He perfectly epitomizes the “if you ain’t first, you last” Ricky Bobby mentality. The Panthers quarterback is also the top value in PFF’s DFS optimizer. 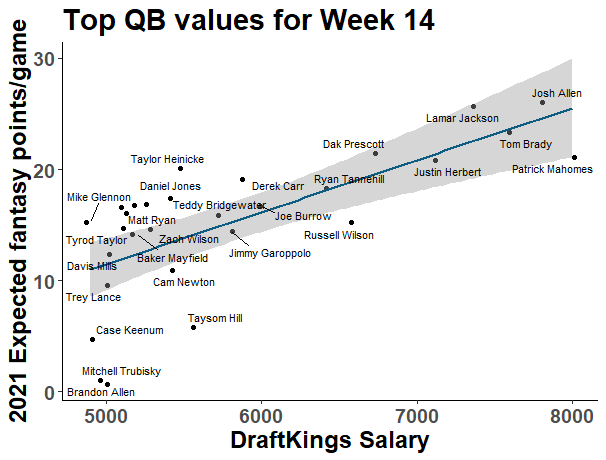 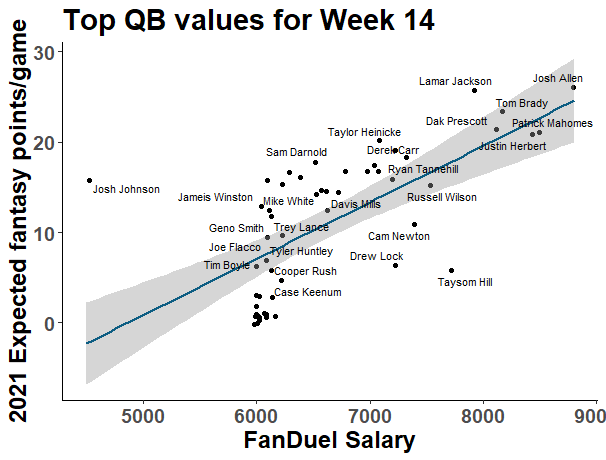 Austin Ekeler ($8,300) is the consensus No. 1 running back in PFF’s fantasy rankings and should be the first player locked into cash builds. 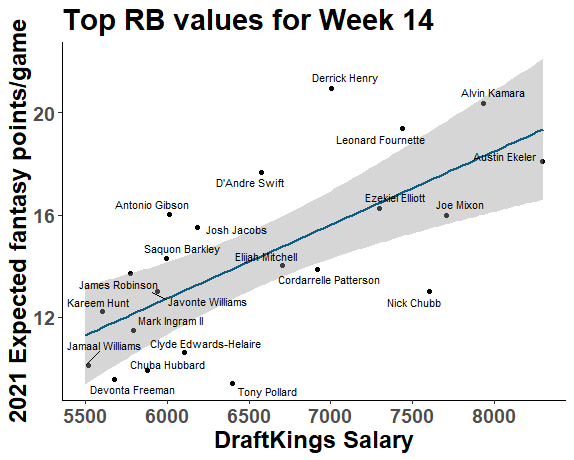