NEW ORLEANS, LA - DECEMBER 24: Mark Ingram #22 of the New Orleans Saints reacts after a touchdown against the Tampa Bay Buccaneers at the Mercedes-Benz Superdome on December 24, 2016 in New Orleans, Louisiana. (Photo by Sean Gardner/Getty Images)

The Baltimore Ravens have signed RB Mark Ingram to a three-year deal worth $15 million. This effectively makes him the 13th-highest-paid running back in the NFL.

At surface-level, it’s hard to tell how much of an upgrade this will be for Ingram’s fantasy prospects. Ingram was stuck in a committee backfield in New Orleans, behind Alvin Kamara (arguably the league’s best or most efficient running back), and Ingram is likely to play a much larger role and without as much competition for touches in Baltimore. Still, despite the committee, New Orleans was always hospitable ground for fantasy running backs. For instance, New Orleans has ranked top-three in team running back PPR fantasy points in each of the past five seasons.

Ingram disappointed for fantasy last year but was a perennial RB1 when healthy and on the field before that. Ingram ranked 28th in fantasy points per game last year, after ranking seventh, 10th, second, and 12th across his four previous seasons. 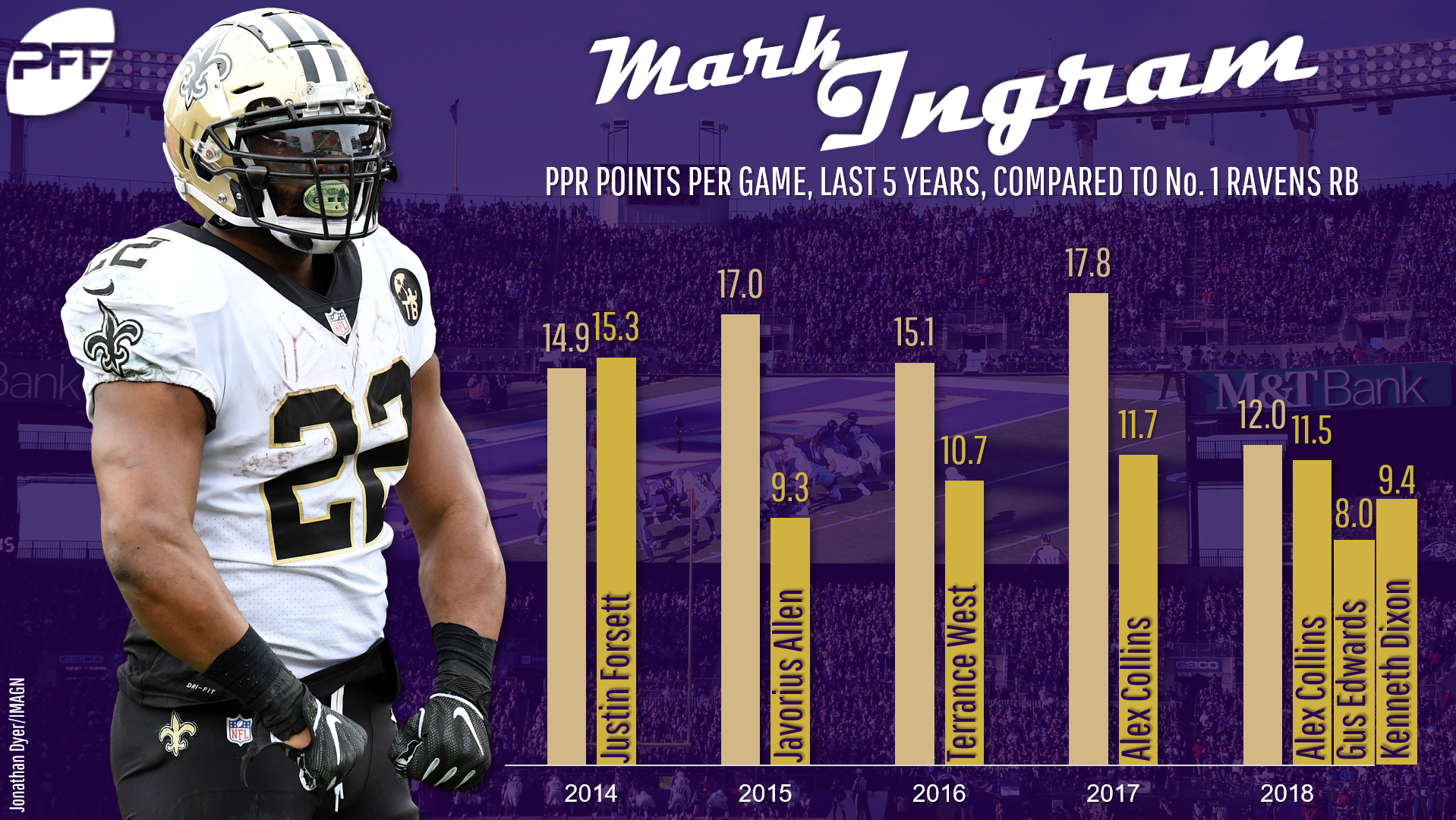 Of course, New Orleans doesn’t deserve all of the credit, because Ingram has also played incredibly well. Despite the underwhelming fantasy production last year, Ingram still graded eighth-best among all running backs on the ground, and 14th-best overall. Since 2015, he ranks fifth among all running backs in fantasy points and yards from scrimmage. Since 2014, among all 37 running backs with at least 550 touches, Ingram ranks first in yards per carry (4.71) and fourth in yards after contact per attempt (2.90). As a receiver, he’s dropped just seven passes over the past five seasons (229 targets), giving him the third-best drop rate of 38 qualifying running backs.

Though New Orleans was good for Ingram’s fantasy stock, Baltimore has the potential to be great. Since 2015, Baltimore ranks third in targets intended for running backs. Since Lamar Jackson took over QB duties in Week 11, Baltimore’s running backs ranked second in carries, first in rushing yards, and first in rushing yards per carry (5.34). (Remember, mobile quarterbacks have a positive impact on a running back’s yards per carry.) Baltimore also ranked sixth-best in point differential last year, implying good gamescript for Ingram, which is important.

Ingram should be due for a massive upgrade in volume in Baltimore, and I don’t think the efficiency or quality of those touches is likely to be much worse than New Orleans. As it stands, I have Ingram penciled in as a borderline RB1 in PPR leagues and a low-end RB1 in standard leagues.