It’s Wednesday and that means it’s time to breakout the flex fantasy football rankings for Week 2 of the NFL season. Remember that rankings change throughout the week, so be sure to check our staff rankings for updates. 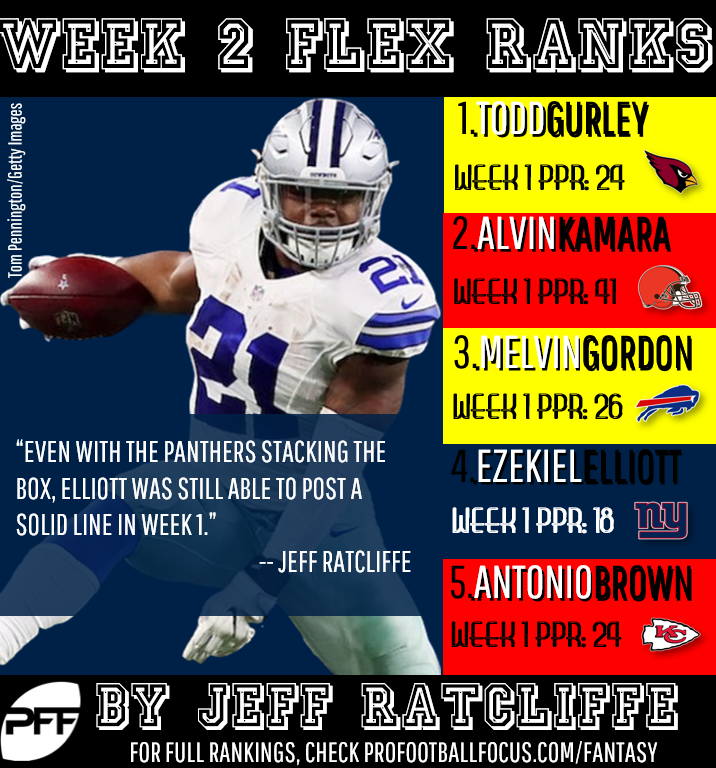 1. Todd Gurley, LAR vs ARI (RB1) — He hit the ground running in Week 1 and remains the No. 1 fantasy option

2. Alvin Kamara, NO vs CLE (RB2) — Kamara ate up the Bucs and will do more of the same to the Browns this week.

4. Ezekiel Elliott, DAL vs NYG (RB4) — Even with the Panthers stacking the box, Elliott was still able to post a solid line in Week 1.

5. Antonio Brown, PIT vs KC (WR1) — This is a much more favorable matchup for Brown this week.

7. David Johnson, ARI @ LAR (RB6) — Johnson and the Cardinals offense struggled for much of Week 1, but he's still going to see a ton of touches in this offense.

8. Saquon Barkley, NYG @ DAL (RB7) — As he showed us in Week 1, all it takes is one play for Barkley to put up a week's worth of fantasy production

10. Joe Mixon, CIN vs BAL (RB9) — The breakout began in Week 1 and continues this week despite a somewhat tough matchup.

11. Julio Jones, ATL vs CAR (WR2) — He racked up a whopping 19 targets in the opener. Look for the heavy volume to continue for Jones.

12. Michael Thomas, NO vs CLE (WR3) — The gamescript may not be as crazy this week for the Saints, but Thomas is still going to see plenty of work.

15. Jordan Howard, CHI vs SEA (RB10) — The Bears showed that they are going to use Howard as a three-down back. He's worth back-end RB1 consideration.