It’s Wednesday and that means it’s time to start making your start and sit decisions for your fantasy football lineups. One of the best resources to help you is our flex fantasy football rankings for Week 12 of the NFL season. Remember that rankings change throughout the week, so be sure to check our staff rankings for updates.

2. Alvin Kamara, NO vs ATL (RB2) — With the Saints offense rolling, Kamara should get the best of this plus matchup.

3. Ezekiel Elliott, DAL vs WAS (RB3) — Elliott has been on fire over his last three and that continues in this one.

4. Saquon Barkley, NYG @ PHI (RB4) — Barkley is arguably the league's top receiving running back and will get plenty of work against Philly. 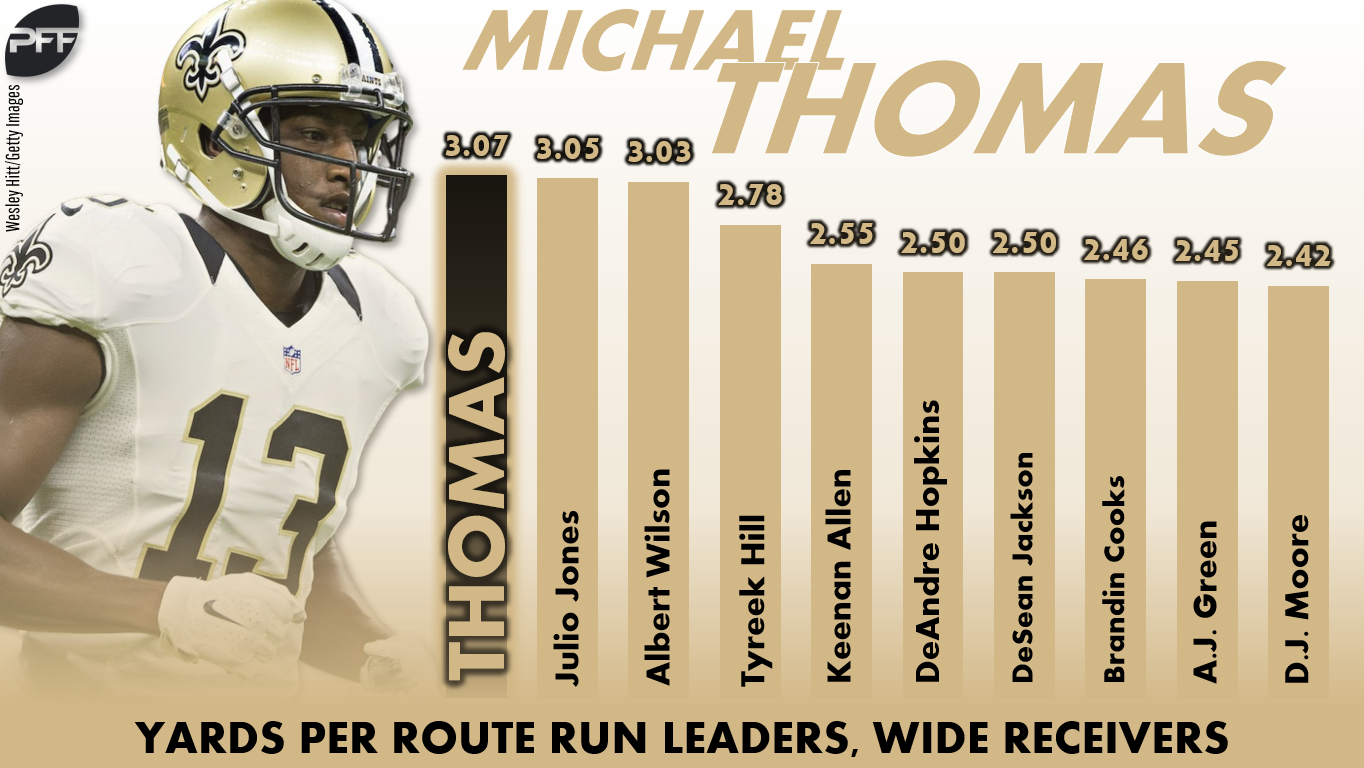 7. David Johnson, ARI @ LAC (RB6) — A disappointment for a good chunk of the season, Johnson is heating up at the right time.

9. Julio Jones, ATL @ NO (WR3) — He's scored in three straight games and should benefit from gamescript.

10. Christian McCaffrey, CAR vs SEA (RB7) — What he doesn't do with his legs, McCaffrey does as a receiver.

11. Nick Chubb, CLE @ CIN (RB8) — Chubb has been fantastic this season and gets a plus matchup against the Bengals.

12. Adam Thielen, MIN vs GB (WR4) — While he's trended down just slightly, Thielen is still in play as a strong WR1.

13. Odell Beckham Jr., NYG @ PHI (WR5) — The Eagles secondary is scraping the bottom of the barrel.

14. DeAndre Hopkins, HOU vs TEN (WR6) — Hopkins should see plenty of Adoree’ Jackson, who just got lit up by T.Y. Hilton.

15. Davante Adams, GB @ MIN (WR7) — Adams is the clear top target in the Packers offense and could see even more work with Jimmy Graham banged up.

18. Mike Evans, TB vs SF (WR8) — Evans should benefit from Jameis Winston being under center. 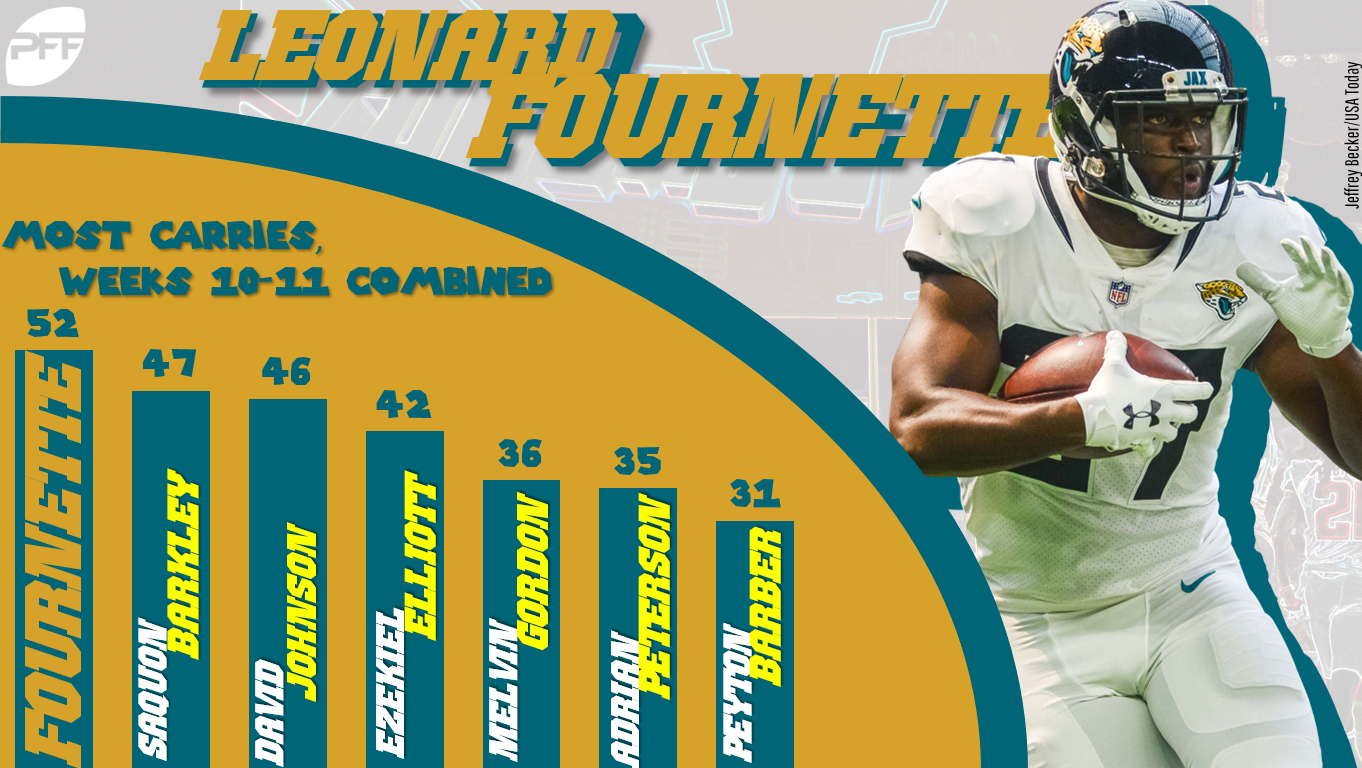 22. Joe Mixon, CIN vs CLE (RB12) — The Bengals offense is struggling, but Mixon is still in play as an RB1 in this matchup.

23. Marlon Mack, IND vs MIA (RB13) — Mack gets an upgrade against the porous Dolphins defense. 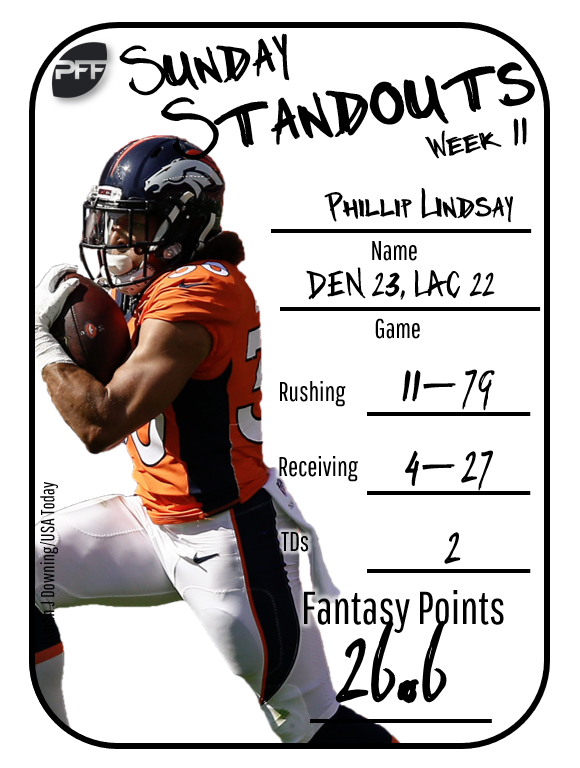 26. Phillip Lindsay, DEN vs PIT (RB15) — Lindsay's upside bodes well every week, even when he's facing a tough run defense like the Steelers.

29. Zach Ertz, PHI vs NYG (TE1) — Last week was ugly, but Ertz gets things back on track in a plus matchup against the Giants. 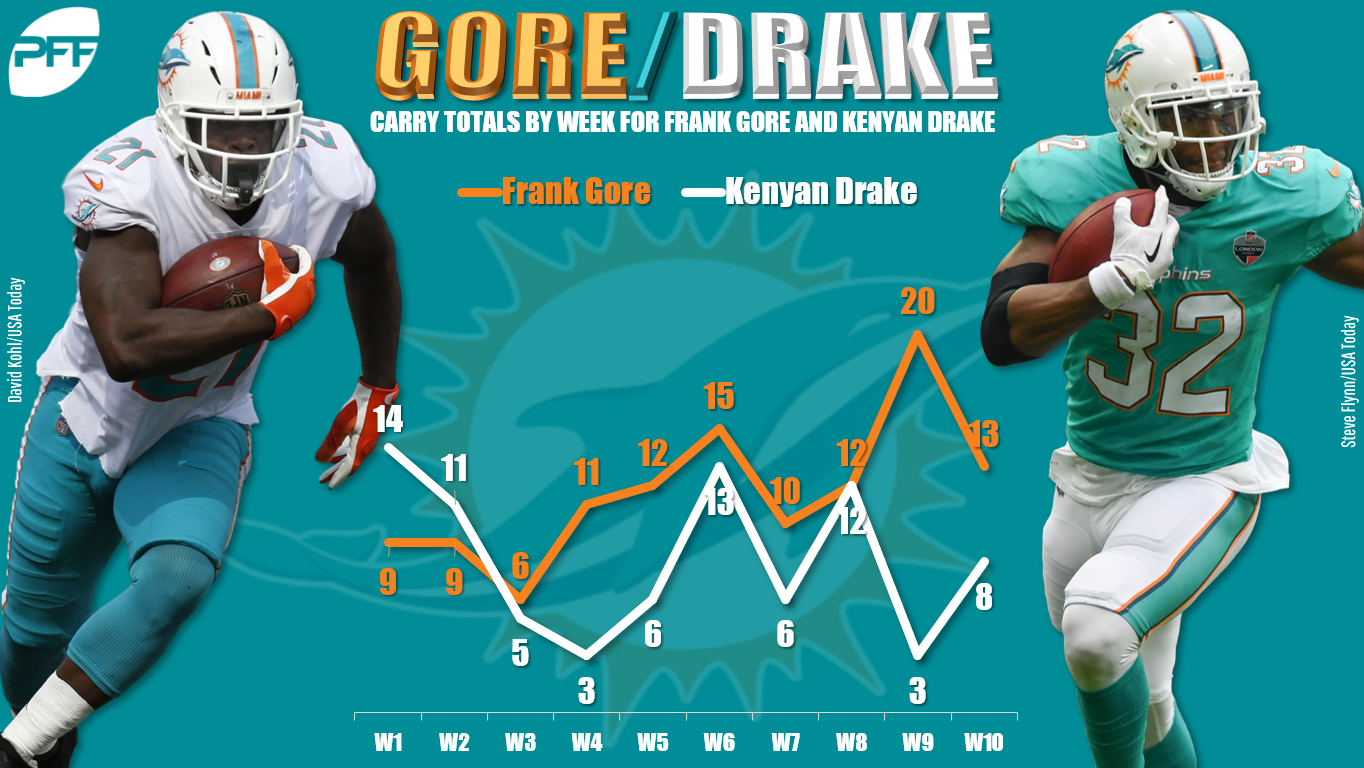 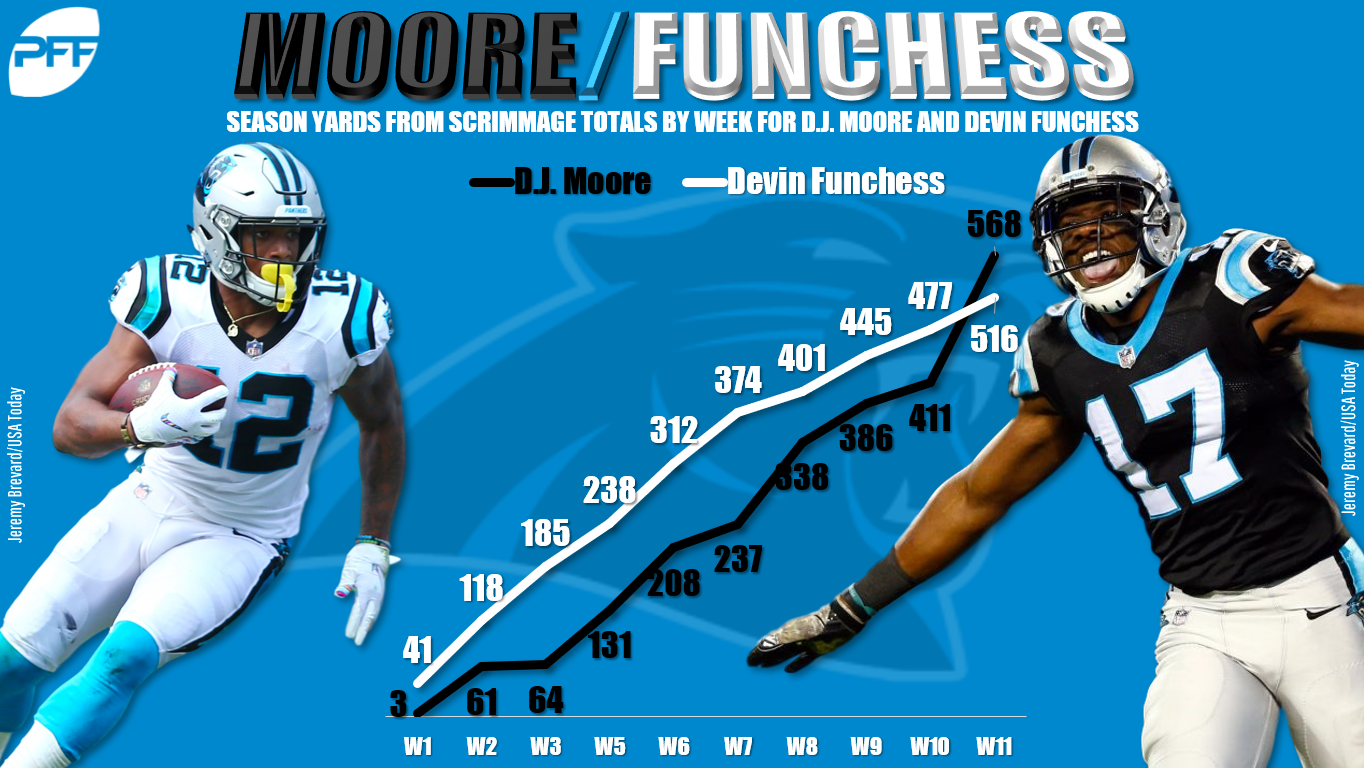 85. Keke Coutee, HOU vs TEN (WR42) — Coutee has established himself as the Texans' preferred No. 2 wideout.

100. Josh Adams, PHI vs NYG (RB38) — While it's tempting to use Adams this week, keep in mind that there isn't a lot of meat on the bone for him in the Philly offense.

118. Curtis Samuel, CAR vs SEA (WR60) — The second-year man is trending up in the Panthers offense. 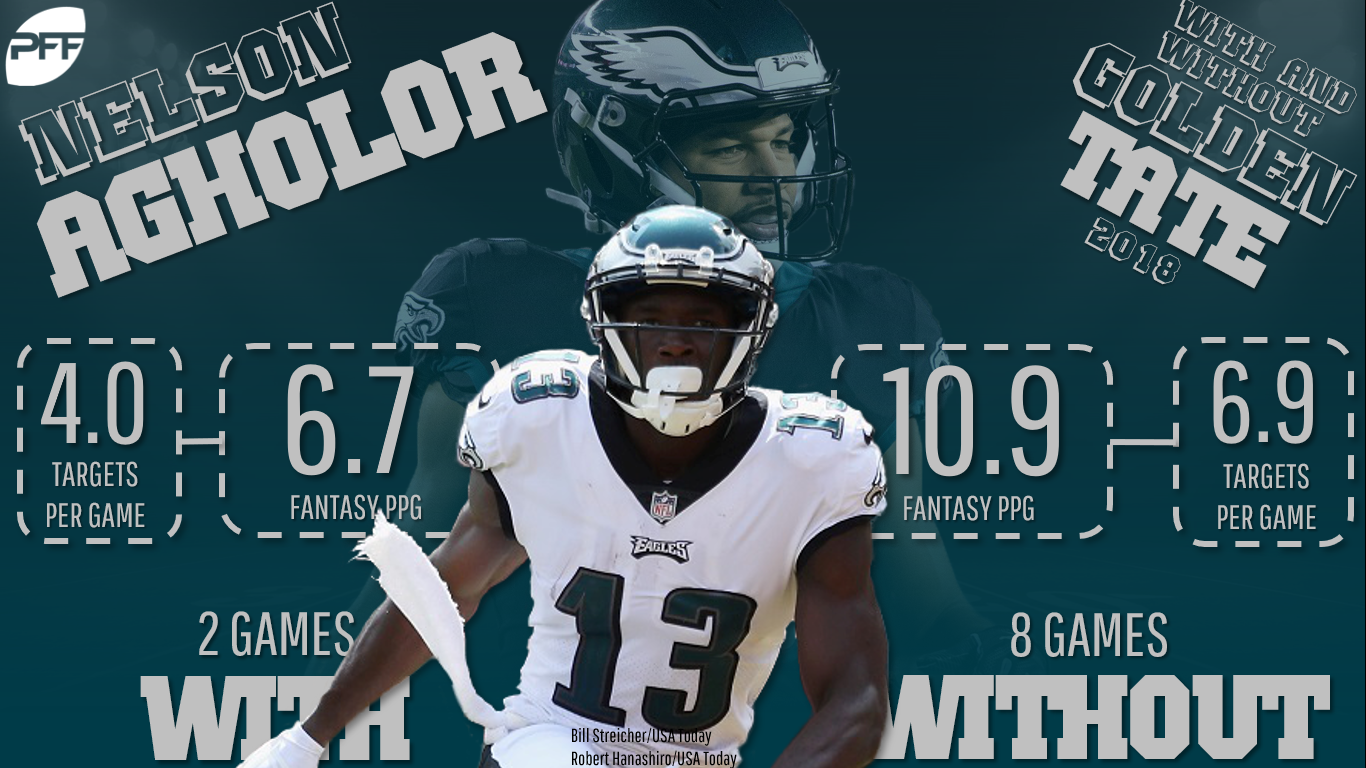 131. Jeff Heuerman, DEN vs PIT (TE18) — If you need a streamer option at tight end, Heuerman is likely available in your league.

(READ MORE: Check out Pat Thorman’s Snaps, Pace, & Stats for a look at which games will offer plenty of fantasy opportunity this week. And for those playing the Thanksgiving DFS slate, Tyler Buecher has plenty of advice.)