Hello, and welcome to Week 16 of the Expected Fantasy Points Report. If you’re unfamiliar with expected fantasy points, you can read this in-depth explanation from the offseason. You can also read more about expected touchdowns.

Through 15 weeks of action, here are the top-25 players in expected fantasy points per game: 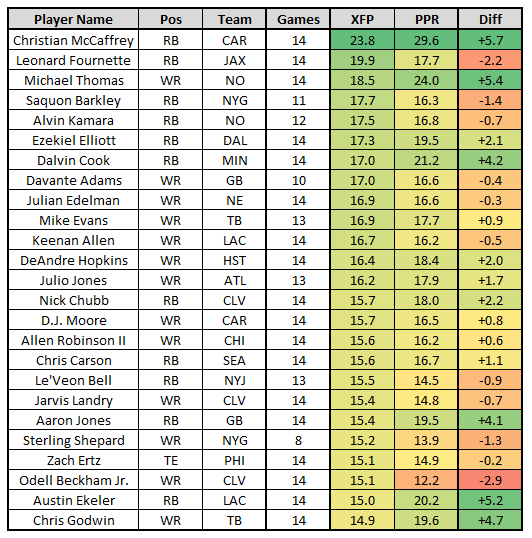 Brown, the league’s most efficient fantasy wide receiver, finally saw WR1 volume in Week 15. 30% of Brown’s fantasy points have come on efficiency (+3.9), rather than volume (8.9), which leads the league. In Week 15, Brown hit season-highs in XFP (22.7), targets (13), and air yards (184), all of which ranked top-seven on the week and were almost double his prior season-highs. Since Week 13, Brown ranks behind only Michael Thomas in fantasy points per game (22.5), despite still ranking just 35th in XFP per game (11.8).

Singletary was stuck in a 50/50 committee alongside Frank Gore for much of the season, but that no longer seems to be the case. Singletary saw a season-high 26 opportunities in Week 14 and fell just short of that number in Week 15 (24). Now, for the fifth straight game, Singletary has eclipsed a 70% snap share, and, for the third straight game, a 70% XFP share. Although the production hasn’t quite been there, and he draws a bottom-five matchup for the third consecutive week, Singletary can be safely started as a mid-range RB2 or better.