Week 10 Fantasy football picks: It's time to drop these 8 players

As we head into Week 10 of the NFL season, it’s time to step back and take a look at players worth dropping in fantasy football.

Dropping players in typical redraft fantasy leagues is a necessary evil. Most redraft fantasy leagues have shallow benches and smart fantasy owners are constantly churning over the deadweight in favor of future potential. Holding onto a player for too long just burns a valuable hole on your bench. Adversely, you don’t want to let a player go right before his breakout.

These types of articles are often league and scoring-dependent, so to appeal to the masses, these are all going to be drops that I’d personally feel comfortable dropping in 12-team, PPR leagues. Your specific league and situation might be different, but these work as a general statement.

Allison was ruled out of last week’s matchup with the Patriots due to a groin or core-muscle injury. It could mean surgery for Allison, or at the very least, a lingering issue that may hamper him for the rest of the season. Considering he went to see a specialist on the manner Monday, there’s little room for optimism. We saw Sunday that with Allison out, Marquez Valdes-Scantling will take over his route-running responsibilities, and with how well MVS is playing to date, Allison’s role may be in jeopardy upon his return. Despite the uncertainty regarding Allison’s injury, I wouldn’t blame anyone for proactively dropping Allison in favor of other targets with playoffs right around the corner. 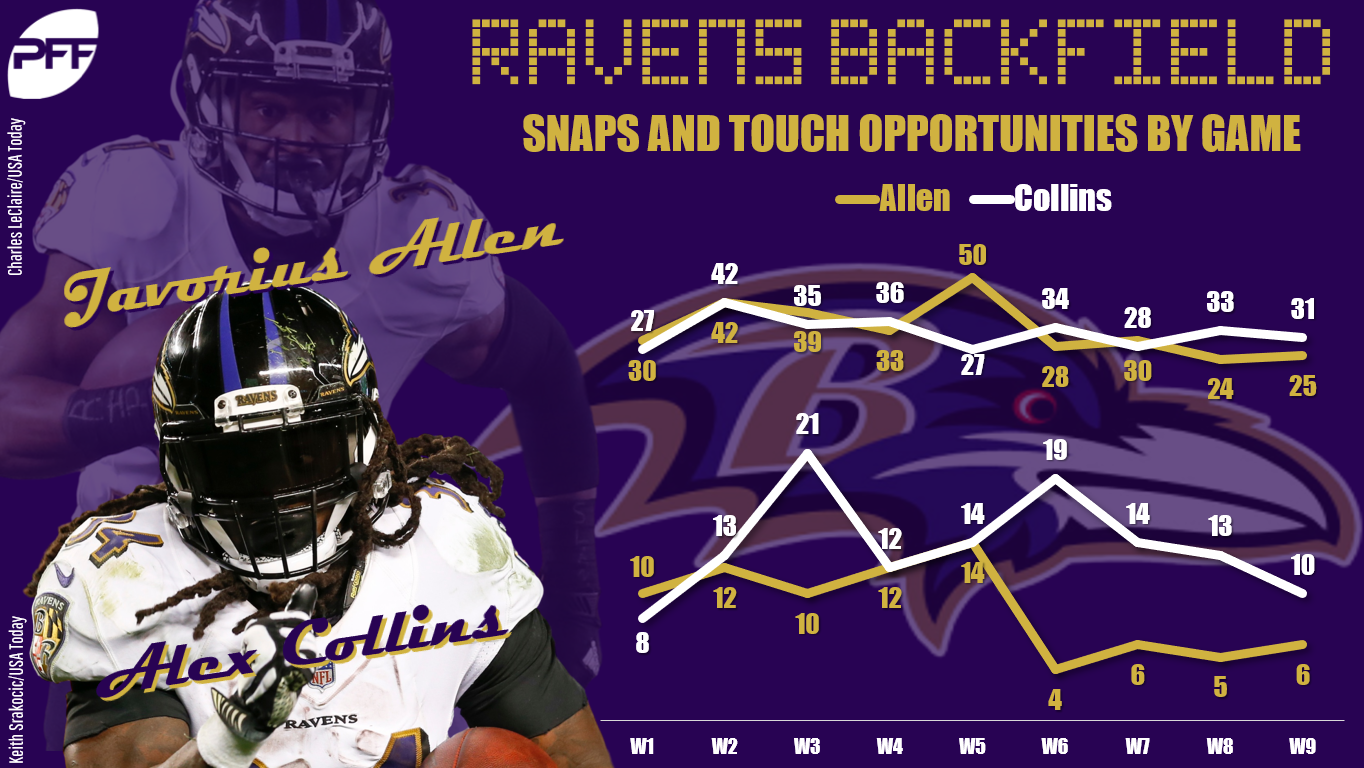 Over the past four weeks, Allen has accrued touch totals of six, three, six, and four. The addition of Ty Montgomery to this offense likely isn’t going to make those numbers rise. It’s hard to justify rostering a player with so few opportunities like that, let alone thinking about ever starting them. Montgomery’s addition now dashes hope of stashing Allen in case of an Alex Collins injury. It could now very likely turn into a two-back committee if that were to happen. With the Ravens entering their Week 10 bye, now’s a perfect time to drop Allen and find a piece with higher upside.

This is more an indictment of the play of Sam Darnold than Anderson, but the two have just not found success for much of this year. Outside of them beating Denver’s secondary for two long scores, the chemistry just isn’t there between Darnold and Anderson on the deep ball. Anderson was a deep-ball specialist last year, but due to Darnold’s play — Darnold has a league-low 44.5 passer rating on deep passes (20-plus yards) — just four of his 15 deep targets have been deemed “catchable.” Anderson reached a season-high four receptions last week but has been held to less than 50 receiving yards in all but one game. The Jets wideouts have been decimated with injuries, yet Anderson never really stepped up as an every-down target for Darnold. With Quincy Enunwa returning last week, Anderson’s targets could take a slight dip and make him an even more volatile fantasy asset for the remained of the season.

Ivory exited Week 9’s game with a brutal shoulder injury. Ivory had actually been playing rather well rotating in with LeSean McCoy, but the injury was severe enough that he required going to a trauma center for further evaluation. If there’s any kind of long-term injury sustained by Ivory, I wouldn’t blame Ivory owners for looking at what’s available on the wire. The Bills play the Jets this week then have their bye. If the team chooses to go the cautious route with Ivory, it could be three weeks until he suits up again. Running behind one of the league’s worst offensive lines and in constant negative gamescript, there isn’t much upside for Ivory upon his return.

Primed for an uptick in playing time following Amari Cooper’s departure, things haven’t gone quite the way we had anticipated with Bryant. Over the past two weeks, Bryant ranks fourth among wide receivers in routes run (17) and has just a pair of targets to his name. While there isn’t much talent there to contend with for targets, the fact that Bryant isn’t even getting playing time is a red flag for us to safely move on. It doesn’t look like Bryant is in Oakland’s long-term plans at this juncture and he can safely be dropped in redraft leagues.

The debut of Elijah McGuire — 6-23-0 on the ground, 3-37-0 on five targets — has officially relegated Cannon back to RB3 status on the depth chart. McGuire played on 7-of-21 running back snaps last week with Isaiah Crowell seeing the other 14. Cannon didn’t see a single snap after filling in well under the receiving back role after Bilal Powell’s injury. Cannon remains a player for us to monitor in dynasty leagues but can be safely dropped in all leagues with McGuire set to form a one-two tandem with Crowell.

I’m going to keep this one short and sweet. The Bills do not have a healthy quarterback capable of throwing the ball downfield to Benjamin. He has one game with more than 50 receiving yards, has yet to catch more than five passes in a game, and hasn’t reached the end zone since Week 2. There is no upside to rostering Benjamin right now.

It was worth a try to see if Barner was going to get running back snaps during Sony Michel’s absence. The Patriots made it clear they’d prefer to roll the dice with Cordarrelle Patterson, with him leading the team with 21 carries over the past two weeks. James White was right behind him with 20 carries, and even Julian Edelman had more carries (4) than Barner (3). He’s a safe drop after being phased out nearly completely.