The 7 things we learned about fantasy football in Week 9

What are some of the top things we learned for fantasy football in Week 8 of the 2018 NFL season? Fantasy football is an ever-changing game, and what we thought was a sure thing a few weeks among might not ring true anymore.

Below are seven things we learned from Week 8 of the 2018 fantasy football season.

‘Sup, Marquez Valdes-Scantling? It looks like you’re going to be a good player 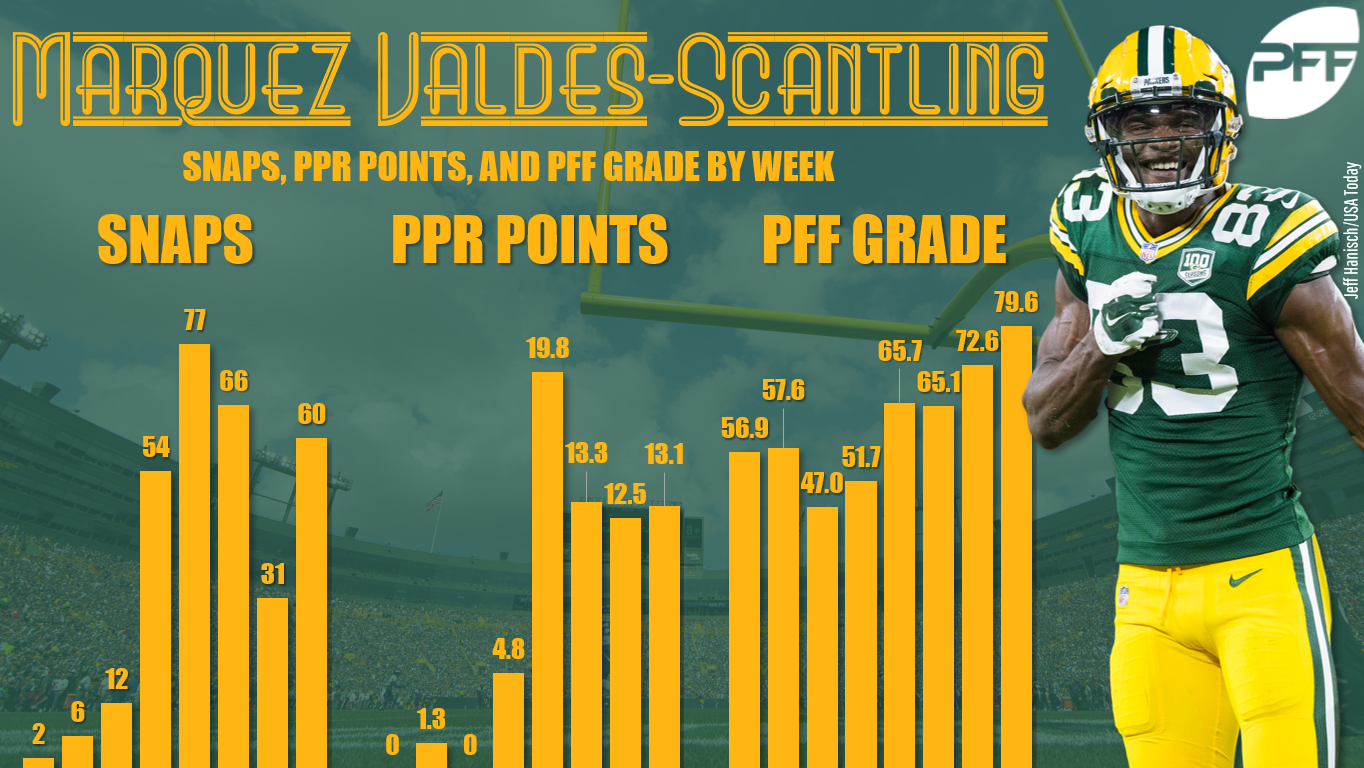 The rookie caught just three passes Sunday night, but they were big plays that set the stage for a promising future. Valdes-Scantling dropped 101 on the Patriots, and while he likely won’t be an every-week producer with Geronimo Allison expected back from injury, he’s making a strong case.

Importantly, Valdes-Scantling came through on some big plays; a long third-down reception on a broken play displayed the rapport he’s building with Aaron Rodgers. And let’s not forget: By the fourth quarter, the Patriots stuck Stephon Gilmore — one of the league’s premiere shutdown corners — on Valdes-Scantling because they couldn’t handle him any other way. That’s respect.

Atlanta rolled into Washington and dropped 38 points against a strong Redskins defense. Matt Ryan threw for 350 yards and four scores. Julio Jones (7-121-1), Tevin Coleman (5-68-2), Calvin Ridley (6-71-1), and even Mohamed Sanu (4-45-0) and Austin Hooper (3-41-0) were able to produce respectable lines. Backup running back Ito Smith got in on the action with 60 rushing yards and a score. This offense proved it can still click at a high level, and when it does, all of its offensive players are on the fantasy radar because they spread the ball around so well.

Baker Mayfield is now 26-of-30 for 266 yards and two touchdowns when targeting Duke Johnson this season. 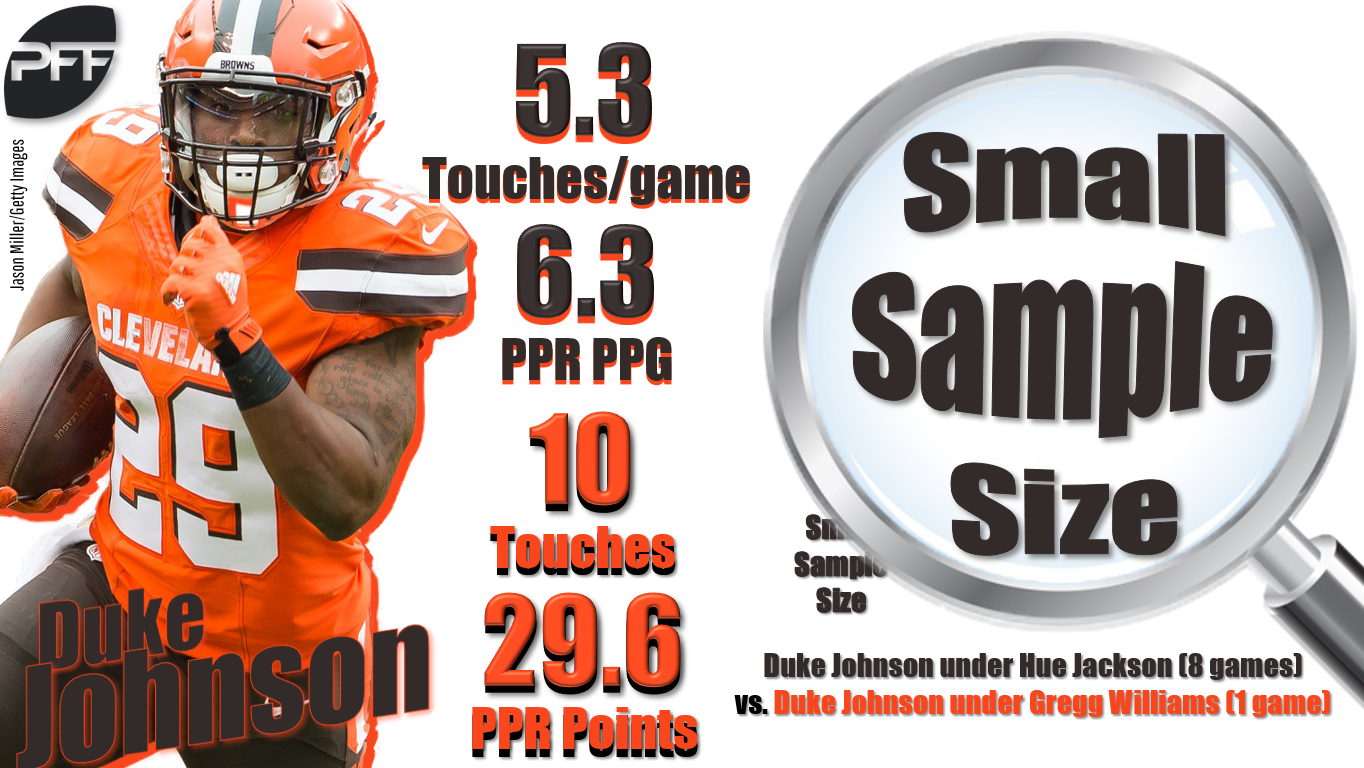 Johnson caught all nine passes thrown his way Sunday for 78 yards and two touchdowns. Baker Mayfield appears to have realized how good Johnson is as a safety blanket, and the new coaching staff finally designed plays for the stud pass-catching back. This was a very friendly gamescript for Johnson, so he won’t produce like this every week, but it seems clear that he’s going to be a bigger part of this offense moving forward (as he should have been all year).

Maurice Harris is worth a pickup

Harris, who was very good in the preseason for those of you who pay attention to that stuff, splashed in Week 9 with 10 catches on 12 targets for 124 yards. He had just 102 yards in Weeks 1-8 combined, so it’s possible that Harris’ big week is just a flash in the pan, but given the talent he’s displayed in the preseason and how reliable he proved himself to be in Week 9, Harris is a great late-season waiver pickup in season-long leagues.

Big Ben can be trusted on the road

The Week 9 matchup for Ben Roethlisberger was about as bad as it gets: On the road (where he historically struggles), against the brutal Baltimore Ravens pass defense — a divisional rival no less. Roethlisberger didn’t have an amazing stat line (270 passing yards, two passing scores, one rushing score), but he also didn’t throw an interception and was a top-six fantasy quarterback on the week. Your process wasn’t bad if you benched Big Ben this week, but his performance did serve as a reminder that the automatic “bench Ben on the road” process needs to be revisited.

It’s not really a backfield-by-committee in New Orleans

Alvin Kamara out-touched Mark Ingram 23 to 10. Ingram is the change-of-pace back, while Kamara is the clear top dog. This was a competitive game throughout, so it’s possible that Ingram will see more work in games in which New Orleans is cruising with a healthy lead, but it’s critical to fantasy owners — especially DFS players — to realize that Kamara’s workload hasn’t changed with Ingram back. He’s still averaging over 20 touches per game over the last three contests.

Jeff Heuerman is officially on the tight end streamer map

Heuerman has been dabbling as a touchdown-or-bust streaming option for a few weeks now, but he exploded in Week 9 with 10 catches on 11 targets (both position-highs this week) for 83 yards and a touchdown. All eyes were on Courtland Sutton to replace Demaryius Thomas’ production, but it was Heuerman who stepped up in a big way.