OAKLAND, CA - OCTOBER 15: Melvin Gordon #28 of the Los Angeles Chargers dives for a 1-yard touchdown against the Oakland Raiders during their NFL game at Oakland-Alameda County Coliseum on October 15, 2017 in Oakland, California. (Photo by Don Feria/Getty Images)

I’ve worked off and on with my Dynasty Slant co-host Michael Moore for several years now, so his perspective on players and draft philosophies rarely surprises me anymore. But he definitely shocked me in this week’s episode when he declared “to me, [Melvin Gordon]’s just a product of that system. He’s easily replaceable in LA … I think he’s been very average.”

There are two compelling pieces of evidence to support Michael’s claim. First, there is the recent track record of Chargers’ running backs. LaDainian Tomlinson and Ryan Mathews were both fantasy stars — when healthy — in San Diego and quickly fell from that perch once they left for a new team. Second, Gordon has performed poorly in his career by the preeminent measurement of back efficiency, yards per carry. But the research that led to my creation of Yards Added exposed how easily yards per carry can misrepresent a back’s effectiveness, and it turns out that Gordon has been the poster child for that dissonance in recent seasons. Gordon has flown past his expected total of yardage the last two seasons on what have been a very difficult set of carries. His trajectory has him poised to be the most effective modern Chargers’ back at the end of his contract with the team, and his dynasty ranking should reflect the strong chance his fantasy value outlasts his rookie deal.

Gordon has threatened the 20-PPR-point-per-game threshold the last two seasons, which the Chargers had not seen since the prime Tomlinson run that ended in 2007 — three years prior to Tomlinson’s free agency. 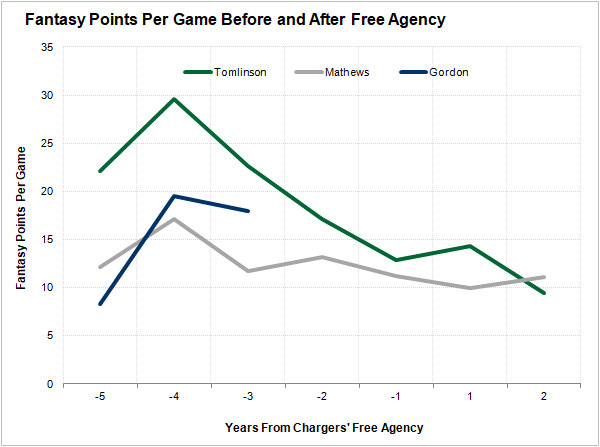 But even while Gordon approached Tomlinson’s stratosphere of fantasy production, yards per carry suggested he was nowhere near the same quality of player. Even at the end of his prime, Tomlinson enjoyed peak seasons with more than 5.0 yards per carry. Gordon, in contrast, has yet to break 4.0 yards per carry in any of his three seasons. His yards-per-carry rates have been below even the average mark for running backs in recent years, around 4.1 to 4.2. 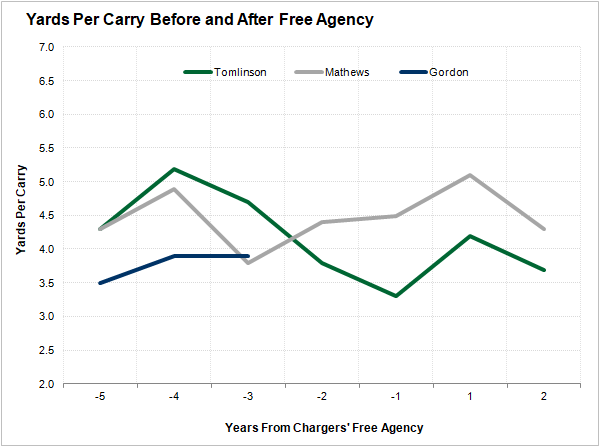 It’s an easy picture to paint, but the result fails to capture the atypical difficulty of Gordon’s attempts. Over the last two seasons, an average back would have expected to gain just 3.6 yards per carry on the types of runs Gordon has attempted. Only Doug Martin (3.2 expected YPC) and Jonathan Stewart (3.4) have faced stiffer challenges — with mixed success — and for much the same reasons. In particular, Gordon has taken nearly 14 percent of his carries on either 3rd- or 4th-and-short or within 5 yards of the end zone, the types of runs with the lowest expected yardage totals. 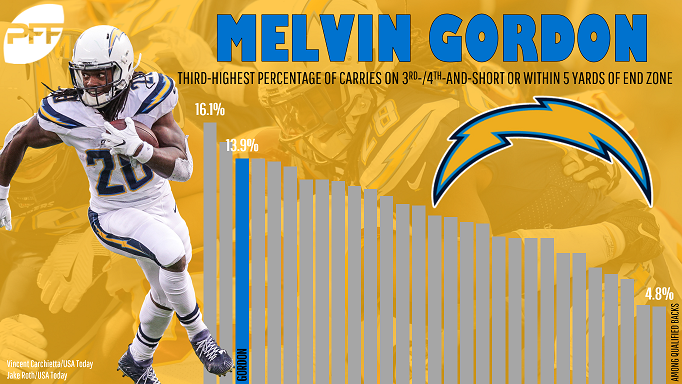 Given that context, Gordon’s 3.9 yards per carry the last two seasons represents an overachievement relative to a typical NFL back. Couple that with his volume of carries and positive contributions as a receiver and Gordon has been one of the leaders in Yards Added at the position each of the last two seasons. Moreover, his totals of 52 and 40 Yards Added the last two years better all but one of Tomlinson’s and Mathews’ seasons with the team. They may have been Gordon’s equal in fantasy production as their tenures with the team approached their ends, but they did not share his efficiency. 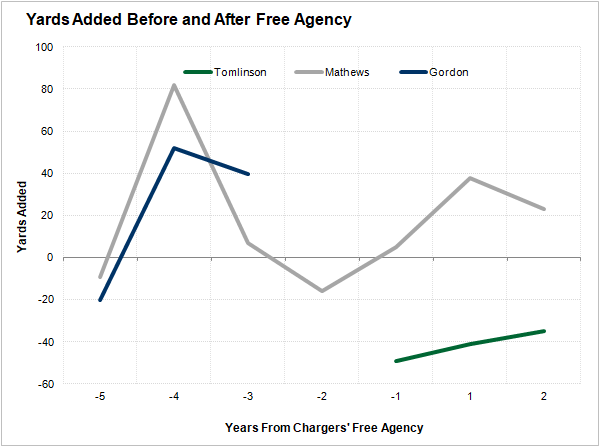 Tomlinson’s peak seasons predate my ability to calculate Yards Added, and if I had to hazard a guess, I would say that his best years likely rivaled the standout seasons of the stat over the last decade, like Adrian Peterson’s 2012 season and Chris Johnson’s 2009 season. Whether or not that’s true, it’s clear that Gordon is a much better player than his basic statistics would lead you to believe.

It’s no guarantee Gordon will remain that as he plays out the final two years of his rookie contract with the team. Mathews himself is an unfortunate example of how quickly those fortunes can change. However, Gordon just turned 25 years old, which makes him a year younger than Le’Veon Bell and David Johnson, two contemporaries who tend to be better ranked in dynasty despite fewer contracted seasons with their current teams and more injury concerns. Perhaps their short-term projected workloads justify that ordering, but it would be a mistake to treat Gordon as a different class of dynasty asset. He can achieve in fantasy for years to come, and his real-world value might even entice the Chargers to do for him what they didn’t for Tomlinson or Mathews, which is let him play out his full career with the team.