Each week in this space, I’ll be highlighting the players I’m building most of my lineups around on that week’s main slate. (Most of these locks are for tournaments, though I’ll do my best to differentiate where needed.) Lock these guys into lineups and go from there. Check out below for Week 9.

Sunday’s Lions/Raiders game has the second-highest over/under on this week’s main slate at 50.5 points. The top over/under (Buccaneers/Seahawks) has two premier DFS options as well, but given Jameis Winston’s turnover-happy ways of late and Russell Wilson’s run-heavy offense and exorbitant price tag, I prefer to go for Stafford and Carr. Stafford is only a point shy of his career-best fantasy-points-per-game average, while Carr’s last two games were his best two fantasy games of the season. Oakland is allowing the second-most fantasy points per game to opposing quarterbacks, while Detroit has been burned in back-to-back weeks by Kirk Cousins and Daniel Jones. You’ll want a big helping of players in this game at every position this week (spoiler!). 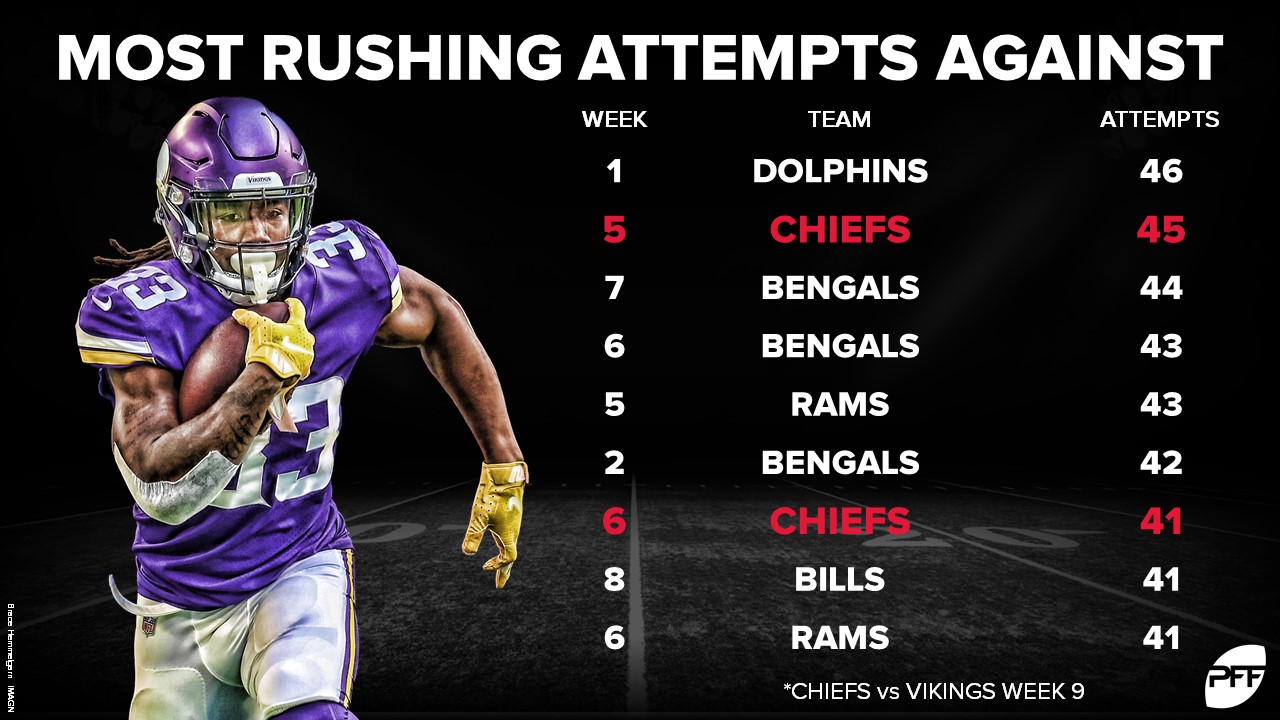 There have only been nine games all year in which a team has attempted more than 40 carries in a game. Two of them — Indianapolis in Week 5 and Houston in Week 6 — came in Patrick Mahomes’ last two healthy starts, as those two teams made every effort to keep the ball out of the star’s hands. If Mahomes returns this week, we can expect that to be the Vikings’ approach as well. And if Mahomes misses the game … well, the Vikings are still second in the league in rush-play percentage this year, at 53.4%.

As appealing as everyone involved in the passing game is in this matchup, Jacobs is a tasty ground option as well. The Lions are allowing the third-most PPR points per game to opposing running backs this year, and with the Raiders slight favorites in this game, that could bode well for a player in Jacobs who has been far more productive in wins this year than losses.

We know Benny Snell is out Sunday. As of this writing, James Conner is still a question mark. If he plays, just pretend Samuels isn’t here. But if Conner is out, that will leave Samuels as the bell-cow back in this offense. In Samuels’ last healthy game, he not only had 10 carries and 8 receptions, he even had three pass attempts and the Steelers kept the ball out of Mason Rudolph’s hands — out of 33 quarterbacks with at least 100 dropbacks this year, Rudolph’s 48.2 passing grade is tied for second-worst, better than only Josh Rosen. And in three games for Samuels without Conner last year, he averaged 18.0 touches, 109.3 scrimmage yards, and 16.9 PPR points.

The Raiders have put up a PFF coverage grade under 60.0 five times this year, 41.0 or under three times. For the season, the team has a 40.8 coverage grade, third-worst. Golladay’s matchup, largely against Daryl Worley according to our WR/CB matchup chart, is one of the week’s best. And across the last two weeks, with Kerryon Johnson hurt, Lions receivers have put up 136.5 PPR points, almost 40 more than second-place Jacksonville (97.7) — the Jaguars are closer to 19th-place Buffalo in the last two weeks than they are to Detroit.

The Eagles have allowed the second-most PPR points per game to receivers this year, but easily the most to outside receivers, which is where Robinson spends the majority of his time. Robinson has at least 7 targets in every game this year — including 13 in Week 1 and 15 in Week 7 — and has a top-15 PFF grade at the position. Except him to beat up on Jalen Mills and whoever else the Eagles try to defend him with.

This is a difficult week across the board, but especially at tight end. Four guys we pay some level of attention to — Austin Hooper, Gerald Everett, Jared Cook, and Tyler Eifert — are on bye, and George Kittle, Darren Fells, Mark Andrews, Jason Witten, and Evan Engram are all off the main slate. In other words … there isn’t a lot to get truly excited about at tight end this week. Best advice? Fill the rest of your roster, and find the best tight end you can afford near the end of your lineup-building.

Yes, we’re going back to this game one more time. The Lions faced the Cardinals and Chargers in Weeks 1 and 2, two teams that (at the time at least) essentially didn’t have tight ends. Since then, the team has allowed double-digit fantasy points to the position in every game and the fourth-most points to the position overall. Waller, Golladay, and one of this game’s quarterbacks could make for an elite stack.