Each week in this space, I’ll be highlighting the players I’m building most of my lineups around on that week’s main slate. (Most of these locks are for tournaments, though I’ll do my best to differentiate where needed.) Lock these guys into lineups and go from there. Check out below for Week 14.

Looking at fantasy points allowed to a position can be helpful, and on our points allowed position chart, you can see that Watson faces a Denver team that has allowed the sixth-fewest fantasy points per game to quarterbacks. That explains why Watson is only $6,500 on DraftKings, the sixth-priciest quarterback on the main slate, despite coming off a four-touchdown game against the Patriots. But it also obscures that the Broncos have fallen apart against quarterbacks lately — since Denver went on bye in Week 10, the team has allowed 20.8 fantasy points per game to quarterbacks, eighth-most, including 20-plus points to Kirk Cousins and Josh Allen and 265 yards and 2 scores against the remains of Philip Rivers. Getting Watson’s ceiling at a relative bargain price is a great deal.

Opposing quarterbacks the Lions have held under 18 fantasy points: Dwayne Haskins (barely relevant as a quarterback) and the aforementioned struggling Rivers. That’s the whole list out of 13 weeks. Meanwhile, Cousins has been putting up his best season as a passer, and with Dalvin Cook banged up and Adam Thielen potentially returning, he could be in for one of his best games of the year. 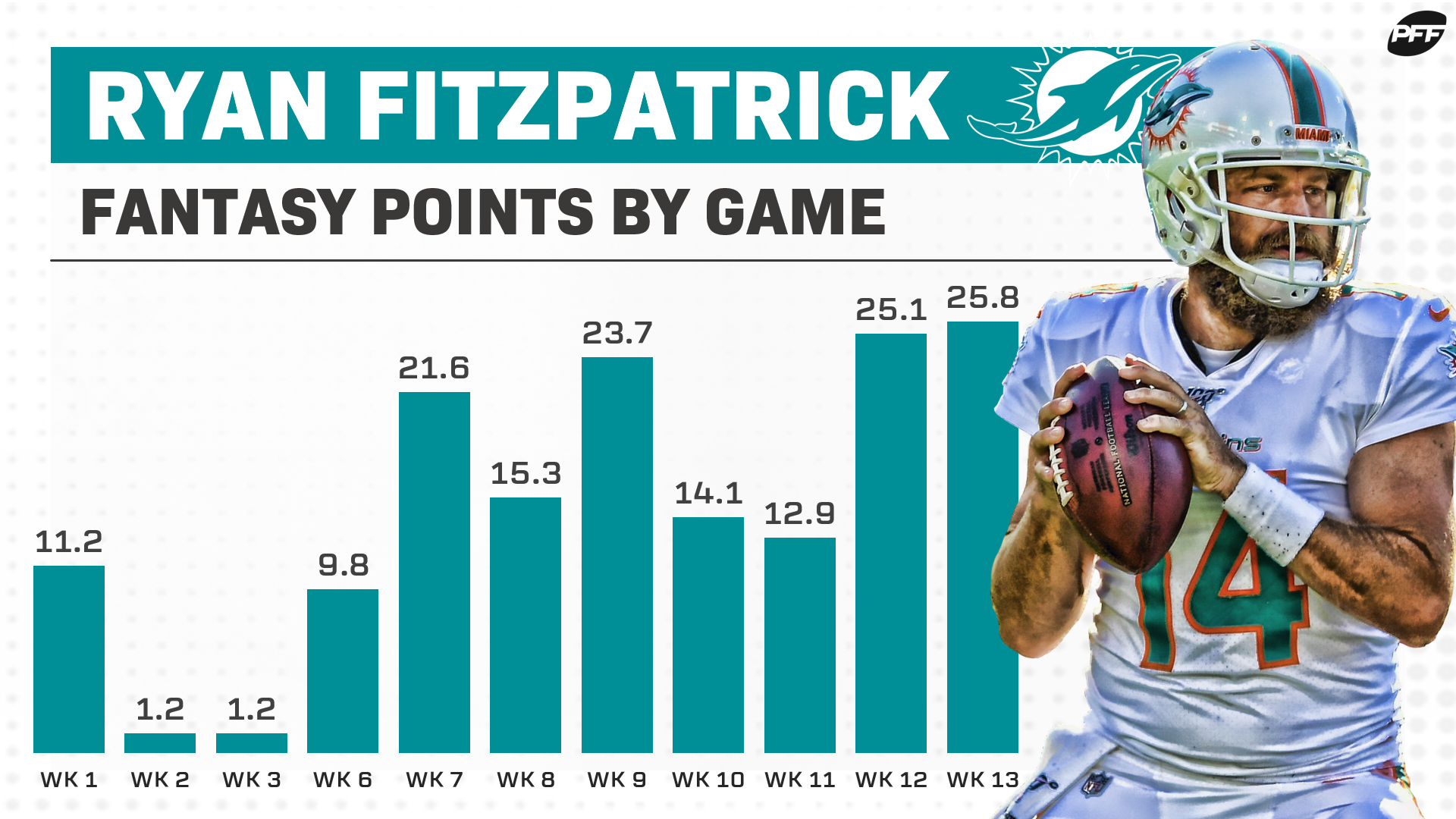 I would never use Fitzpatrick in DFS cash; his volatility could ruin the week for you. But in tournaments, he’s a great play, especially this week, with Fitzpatrick in the midst of a hot stretch and facing a Jets defense that struggles against the passing game and could easily be without its best player in Jamal Adams this week. Fitzpatrick, with easy stack options in DeVante Parker and/or Mike Gesicki, is a great tournament play.

Other than Week 2 against the Chiefs, the Raiders have allowed at least one running back to reach double-digit PPR points in every game this year, with a total of 16 in 12 games. With Dion Lewis barely getting any play this year, Henry is the only game in town for the Titans, and he’s on an insane hot streak right now that includes 7 touchdowns in the last four weeks. As our Scott Barrett noted in this weeks piece on expected fantasy points, Henry is an extreme regression candidate, but entering this week’s game as 2.5-point favorites, he might be able to hold the regression monkey off for a week.

At a glance, you’d expect that Kareem Hunt’s relative success since his reinstatement might be hurting Chubb’s ceiling. And that’s true in the passing game, where Chubb’s target load has dropped off by nearly 40% (3.8 targets per game to 2.3). But as a rusher, Chubb’s work has actually increased since Hunt’s arrival, from 19.3 carries per game to 21.0. You’d prefer a back who is getting plenty of work in both aspects, but as 7.5-point favorites against a Bengals team that struggles mightily against running backs (fourth-most rushing yards allowed), you’ll take the heavy ground work from Chubb.

How bad have things gotten for Jacksonville lately? They’ve been outscored 129-47 in the last four weeks. They are 3-point underdogs at home against a West Coast team traveling east that enters the game 4-8. They’ve allowed seven running backs to reach double-digit PPR points in their last four games, including three Colts backs in Week 11. And now Myles Jack is on injured reserve. Gordon, who gets the majority of the ground work for the Chargers, should have little trouble here. 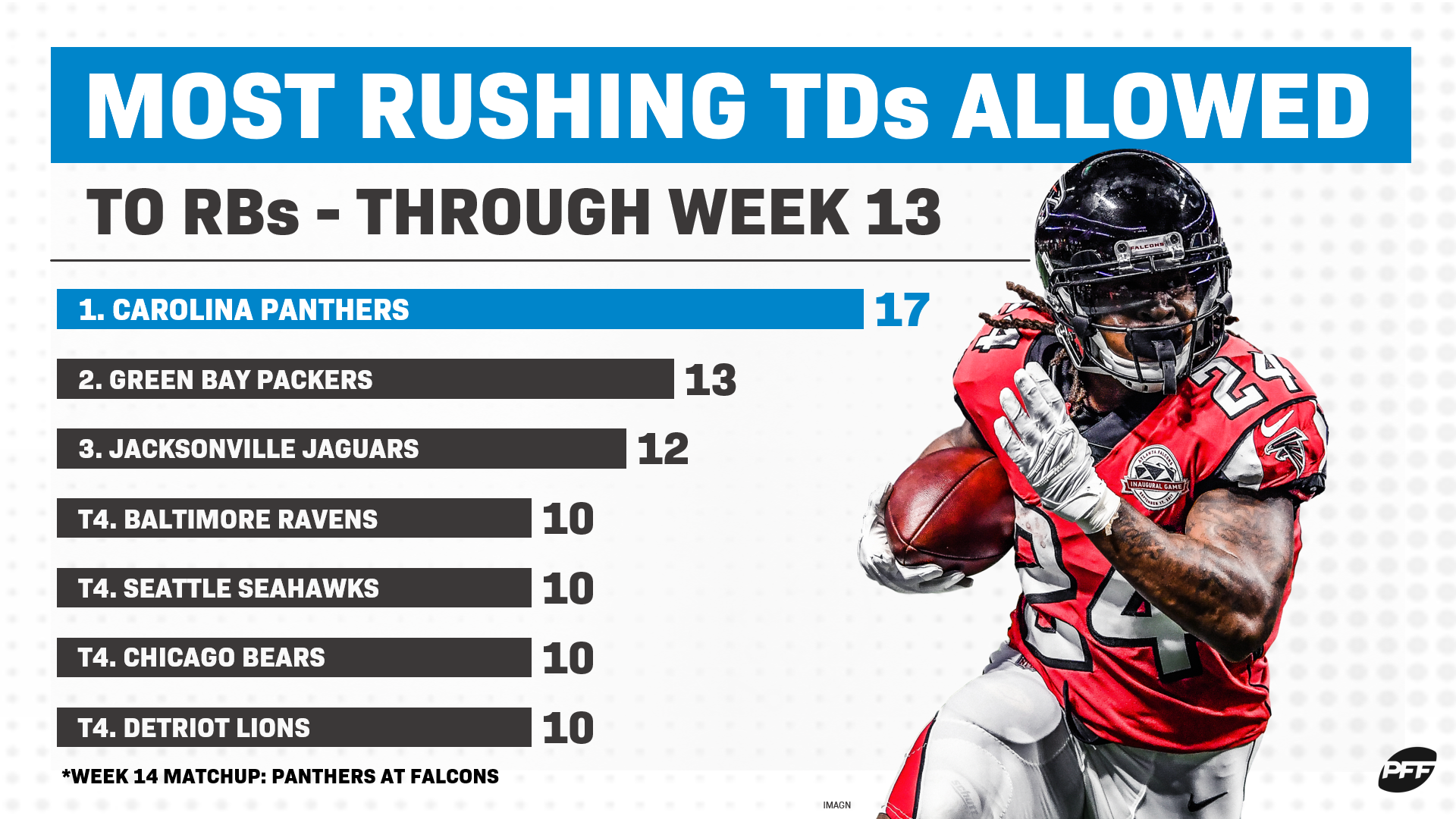 DFS pricing for Week 14 — especially on DraftKings — has gotten super tight, which means you’ll need to scour for savings. And while there are a handful of cheaper options at wide receiver and tight end, running back is tough, unless you are a particular believer in Patrick Laird (which I am not). Freeman, though, is at least a lower-mid-priced option on both sites, and against a Carolina defense allowing a whopping 19 rushing touchdowns to RBs this year (no other team has allowed more than 13), he presents an interesting savings option.

Thomas has easily the highest target floor in the league, with 11 more targets than any other player so far this year and only five players within 20. Even against a tough San Francisco defense, we can expect Thomas to threaten double-digit targets, which gives him plenty of fantasy opportunity. And the relatively tough matchup should keep Thomas’ ownership relatively low (check our DFS ownership projections) despite the fact that his salary is at its low point over the last month.

Moore’s been one of the league’s elite receivers for a big chunk of the season now, WR4 since Week 6 and averaging double-digit targets a game. And yes, the Falcons shut down this Panthers offense three weeks ago, but the defense has fallen back apart since then — Atlanta’s PFF defense grade reached over 70.0 in its two good games in Weeks 10-11, but it’s dropped back under 60 the last two weeks. Our WR/CB matchup chart has Moore drawing Isaiah Oliver and his 57.2 PFF coverage grade this week.

The last time the Dolphins faced the Jets, Parker put up 15.7 PPR points. And Preston Williams, who is now done for the year, put up 24.2 with 2 touchdowns. Will all of Williams’ production slide to Parker? Obviously not. But Parker’s hot streak should easily be able to continue in this matchup.

On the other side of the ball in that same Jets/Dolphins game is Anderson, who has scored 18 career touchdowns and 14 of them have been for 18 or more yards (including 11 of 30-plus yards). He’s a deep-ball monster facing a Dolphins team that has struggled against deep passes in a big way this year (10 touchdowns on balls targeted 20-plus yards downfield, tied for the most in the league). Anderson has lit it up lately to the tune of 11-for-15 receiving for 187 yards and a score in the last two weeks.

Two of this week’s tight end locks are obvious to the point that they might be over-owned, but it doesn’t make them any worse plays. Doyle is the first one, coming off season-highs in snaps, routes, targets, receptions, and yards in his first game with Eric Ebron on IR. The Tampa Bay pass defense is bad across the board (including the fourth-most PPR points per game allowed to tight ends), so there’s no reason to think Doyle won’t keep it going.

And McDonald is the second obvious play. He’s been a huge disappointment this year, but then he’s facing the Arizona defense, the TE-friendliest unit we’ve seen in a long time. Does your tight end face the Cardinals? You use him.

Thomas might flirt with the obvious as well, but there are a surprising number of deep-sleeper tight ends worth paying attention to all of a sudden (Jaeden Graham, off of a productive Thanksgiving; Logan Thomas, with T.J. Hockenson on IR; Nick O’Leary, with 7 targets in two games in Jacksonville; Jonnu Smith; C.J. Uzomah; etc.) that Thomas might not get as much attention as you’d expect. But assuming Greg Olsen’s concussion forces him to miss the game, Thomas would slide into the role, and we saw him put up the sixth-most PPR points among tight ends over the last five weeks of last year as a rookie.