Each week in this space, I’ll be highlighting the players I’m building most of my lineups around on that week’s main slate. (Most of these locks are for tournaments, though I’ll do my best to differentiate where needed.) Lock these guys into lineups and go from there. Check out below for Week 10.

The best rushing quarterback in the league (by a lot) against maybe the worst run defense in the league as 10-point favorites? There isn’t much to figure out here. Jackson has a strong chance Sunday of becoming the first quarterback ever to have four 100-yard games in a season.

By virtually any measure (PFF coverage grade, fantasy points allowed, passer rating allowed) Atlanta is either comfortably the easiest matchup for opposing quarterbacks or only arguably the easiest. Brees is averaging only 16.1 fantasy points per game this year … because he got hurt early in Week 2. Take that game out, and his points-per-game average is 23.9, right up among the best in the league. 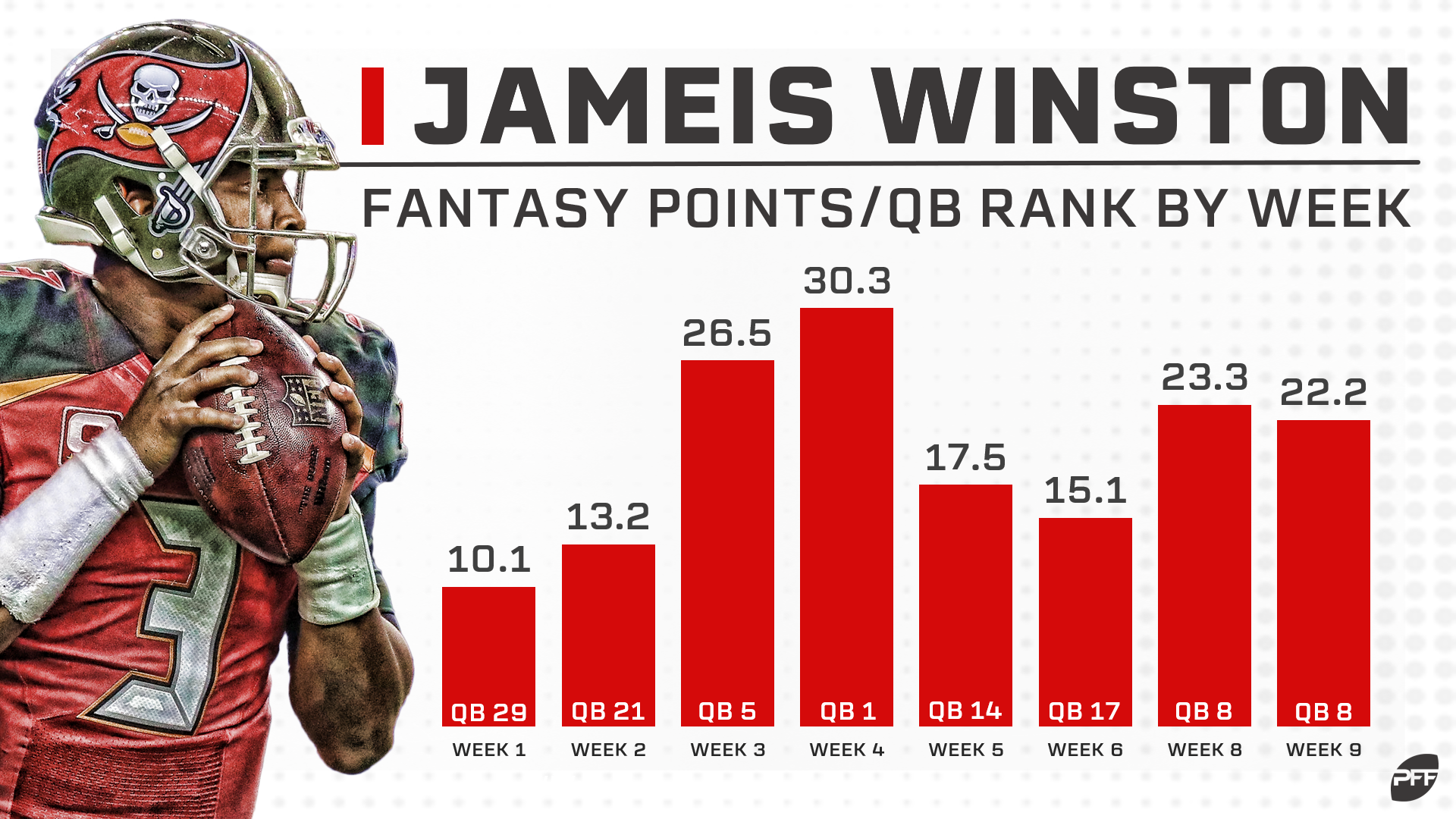 At 52 points, the Cardinals/Buccaneers game has the highest over/under of the week. Both teams are among the top four in fantasy points per game allowed to quarterbacks. And while Kyler Murray has had his struggles this year (he’s gone without a touchdown pass in four of his last six games), Winston — from a fantasy perspective at least — has been electric, with 20-plus points in four of his last six games and 15-plus in all six.

Ultimately this is a surprisingly good week to pay up at quarterback, a rare thing and not my favorite strategy. But the expensive quarterbacks all have good matchups. If paying down, though, Tannehill is the play, facing a Kansas City team that should get Patrick Mahomes back this week, and as such should keep Tennessee passing to keep up. Tannehill, remember, is the No. 5 fantasy quarterback since taking over as the Titans starter.

The sites are (very understandably) raising McCaffrey’s salary to ridiculous levels ($10,500 on DraftKings, $10,700 on FanDuel) in response to his historic performance this year. He’s now leaps and bounds ahead of the next-priciest running back. And regardless, it’s still a worthwhile play — as our Scott Barrett noted on Twitter, by DraftKings points per game vs. salary, even at $10,500 McCaffrey has been the league’s most efficient players. The price has to go higher for him to be too expensive.

It’s rarely the right move to stack a quarterback with a running back who isn’t a big receiver, but if there’s a time to do it, it would be this matchup. The Bengals have allowed the most PPR points per game to opposing running backs this year, and with a healthy 10-point line, there should be enough work for Ingram and Jackson to co-exist in fantasy lineups.

The Dolphins have allowed the second-most carries of 10-plus yards this year, at 38 (incredibly, those aforementioned Bengals have allowed the most, at 47). Mack, meanwhile, is top-10 in the league in breakaway yards (yards gained on carries of 15-plus yards). And with the Colts 10.5-point favorites this week with a questionable quarterback situation (either a banged-up Jacoby Brissett or emergency fill-in Brian Hoyer), the team should lean on Mack.

Montgomery has gone from frustrating committee back to borderline workhorse the last two weeks, and that has turned into fantasy production, with him topping 20 PPR points each game. Now, he faces a Lions team that has allowed six different running backs to top 20 PPR points against them this year, including one in each game since their Week 5 bye. 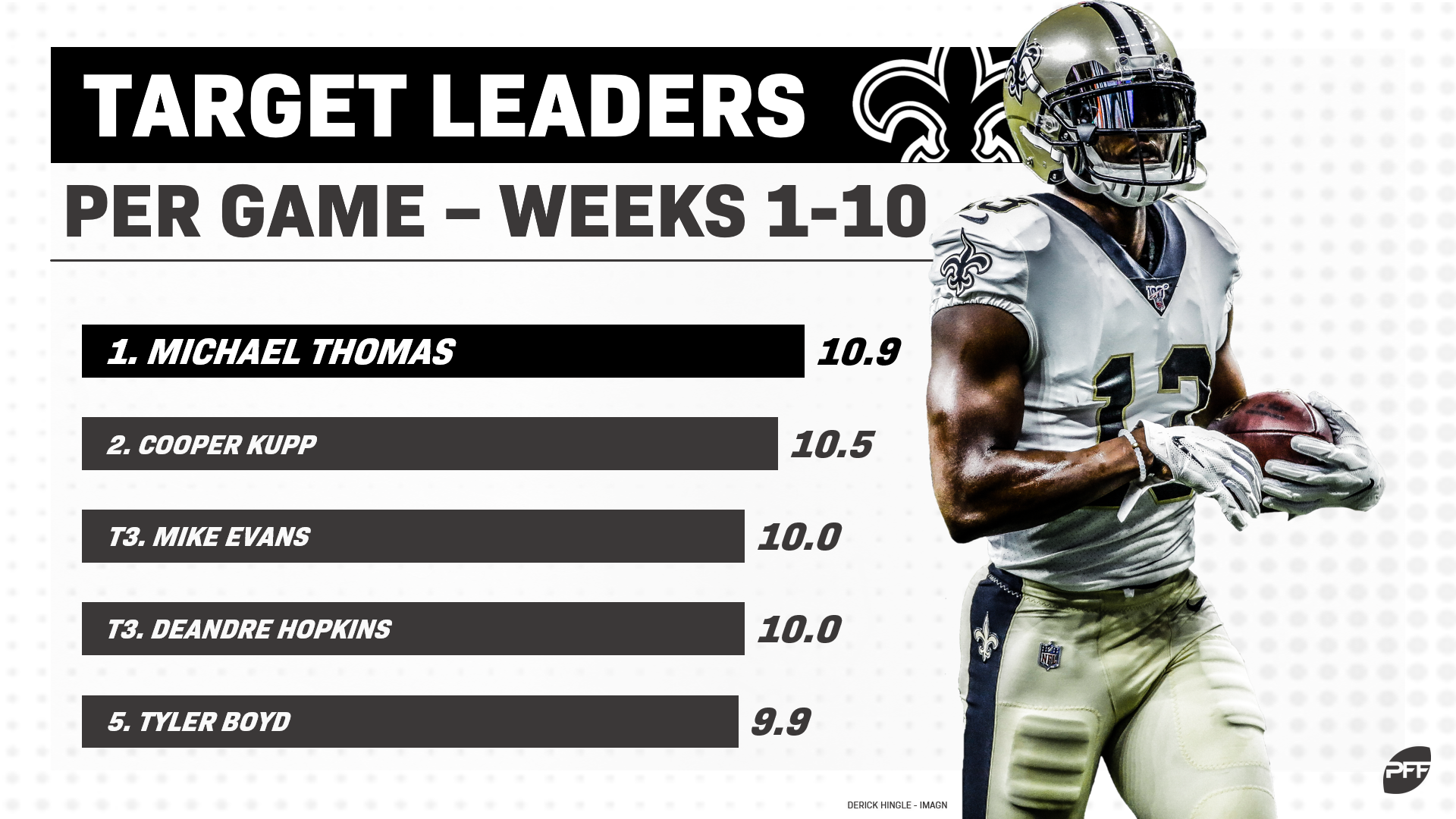 It’s hard to envision a scenario where Thomas doesn’t smash this week. He’s unanimously the No. 1 receiver in our PFF Fantasy staff rankings, he leads the league in targets per game, he has the sixth-best matchup of the week according to our WR/CB matchup chart. It’s all set up for a monster Brees/Thomas stack.

Patrick Peterson hasn’t been his normal self since returning from suspension — he’s allowed a 131.4 passer rating into his coverage in three games, which would comfortably be the highest of his career (his previous worst was 95.5 in 2014). Still, it’s Patrick Peterson, and he’s the best cornerback on the Cardinals, and per our shadow coverage matrix he’s shadowed receivers in each of his games. He’ll almost certainly stick on Mike Evans Sunday, opening up this week to be a Godwin game.

“Slot receiver against the Saints” has been a veritable cheat code this season, and as soon as the Falcons traded away Mohamed Sanu, Gage moved into the slot role in the Atlanta offense. In a game the Falcons are almost certain to have to pass to keep up, this is set up for a breakout game for the second-year Gage.

Both Everett and WR Josh Reynolds saw their usage spike in 2018 when Cooper Kupp was injured. With Brandin Cooks out Sunday, both players could be in line for a bump again. And while a bump for Reynolds means going from scant usage to flirting with relevance, Everett was already firmly in the fantasy conversation, and any boost in his usage should mean real value. The Steelers have allowed multiple touchdowns to an opposing tight end twice this year.

Opposite Everett, McDonald makes sense this week as well. Per our TE matchup chart, McDonald will face plenty of Taylor Rapp Sunday, who has seen a target on 24% of his routes in coverage, a high among safeties active this week. The Rams have allowed an opposing tight end to reach double-digit PPR points in every game since Week 3.