Each week in this space, I’ll be highlighting the players I’m building most of my lineups around on that week’s main slate. Lock these guys into lineups and go from there. Check out below for Week 1.

One of the beauties of Week 1 in DFS is that ownership gets spread out — per our DFS ownership projections, only four players are projected to top 20% ownership in DraftKings, only six in FanDuel. At 50.5 points, this game features the second-highest over/under on the main slate, yet Winston is only projected for ownership in the low double-digit percentages, with Garoppolo roughly half that. Winston is the second-most-expensive active quarterback on the DraftKings slate after Patrick Mahomes, so a pivot to Garoppolo at almost $1,000 cheaper makes some sense. Either way, I want a heavy dose of this game.

Wentz will make for a tricky stack every week, given the wealth of offense weapons the Eagles have. But as an individual play, that load of weapons and the league’s best offensive line make him a strong option in any matchup. Washington has a competent defense, but the Eagles still have the second-highest implied total on the main slate at 27.5 point, so Wentz should have ample scoring opportunity, even if the Eagles call off the dogs late.

We project Stafford’s DFS ownership at 1% or less on both sites despite going against a Cardinals defense that will be without both cornerbacks Patrick Peterson and Robert Alford and starting guys basically off the street. Add to that the fact that the Cardinals promise one of the fastest-paced offenses in the league, and the Lions might be forced to up the pace in retaliation. Expect the Lions to be run-heavy across 2019, but that approach might have to wait a week to get underway.

At 9.5 points, the Seahawks are tied with the Eagles as the biggest favorites in Week 1. Already expected to be one of the run-heaviest offenses in the league even before Jadeveon Clowney’s arrival solidified the defense and increased the likelihood of favorable gamescript, facing the woeful Bengals’ run defense is only the icing on the cake. Carson’s a golden play. 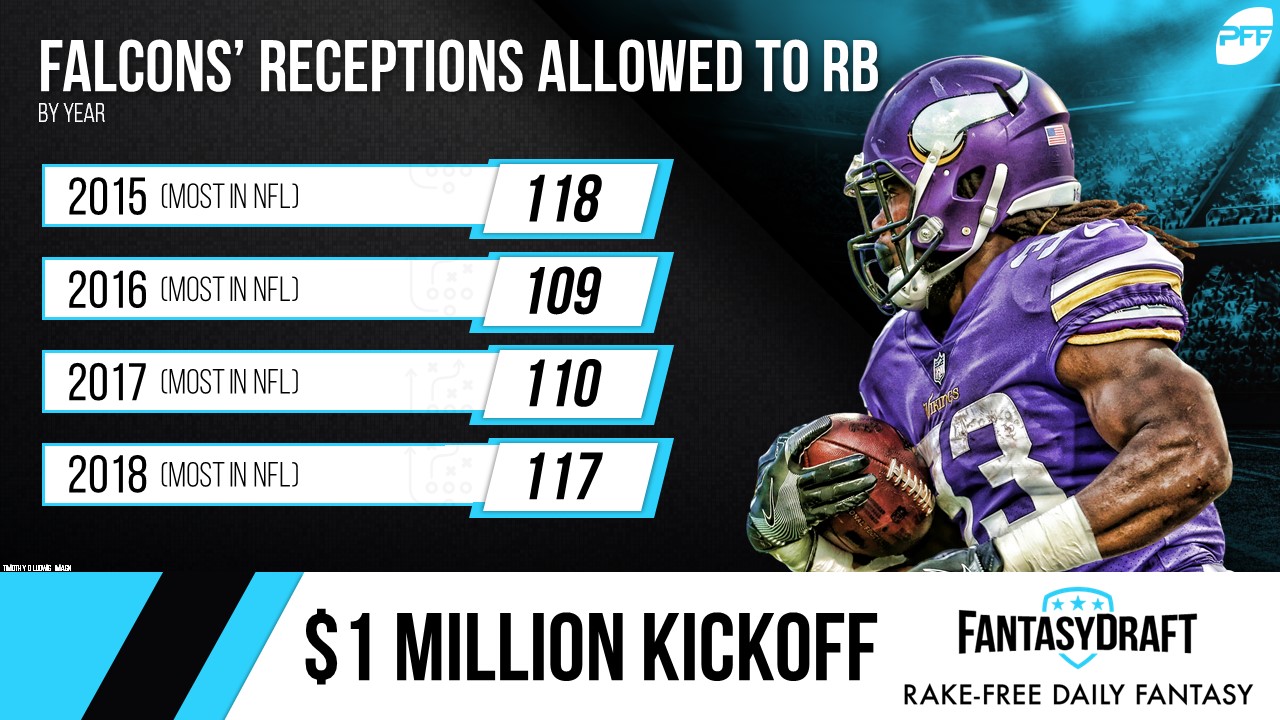 The last time the Falcons didn’t allow the most receptions to running backs, the Patriots won the Super Bowl … uh, Antonio Brown was the top fantasy receiver … well, crap, Drew Brees led the league in passing yards. Okay, screw it, the point is it was 2014, and that means the Falcons have allowed the most receptions to running backs four years in a row. And it hasn’t even been close, as no team has been within six of them in any year. It’s intentional, but that doesn’t mean we can’t exploit it for fantasy purposes. Cook, an extra year removed from injury and with the unquestioned No. 1 role, should feast in Week 1, and his already-high ceiling goes even higher if Stefon Diggs is hampered by injury.

Teams can start running the clock out against Miami with their first snap this year — the Dolphins could have one of the worst offenses we’ve seen in a long time. Ingram hasn’t had more than 25 carries in a game since the middle of 2014, and never topped 16 in a game last year, but In his Ravens debut, he could blow past those numbers.

Beckham’s value should be at its highest in DraftKings, with its full-PPR scoring, but you’ll want a heavy dose of the new Brown in any format. Our WR/CB matchup chart for Week 1 projects Beckham to see shadow coverage from Tennessee CB Adoree’ Jackson, who was good enough on a quality standpoint last year (72.9 overall PFF grade), but gave up massive quantity, seeing the third-most targets (105), second-most receptions (66), and fourth-most yards (823) in coverage last year. In his debut in Cleveland, Beckham is a strong bet to lead the league in targets.

As mentioned above, you’ll want massive shares of this game, including each team’s likely No. 1 receiver and Godwin, who should have a massive advantage in the slot against K’Waun Williams. It’s obvious, but they definitely warrant mention.

The jury is out on Josh Allen overall, but we know he can throw deep, and we know Brown can catch the deep ball. Meanwhile, the Jets were among the most vulnerable teams to the deep pass in the league in 2018. Brown’s abysmal stretch run with Lamar Jackson and the Ravens last year has colored impressions of him, but he was plenty productive over the first half with Joe Flacco at quarterback, and at only $4,300, it would only take one deep touchdown to get him into a strong return on investment.

All six of the top names at the tight end position (Travis Kelce, George Kittle, Zach Ertz, Evan Engram, O.J. Howard, Hunter Henry) are active in this week’s main slate, and their respective ceilings are so high that it’s going to be hard to get away from them. I’ll probably be 100% on those six guys in my lineups this week, and recommending anyone from below feels like contrarian for contrarian’s sake.