This article is long, so I’ll spare you a lengthy intro. Here’s everything need to know in order to dominate your Week 5 DFS tournaments and cash games.

As I’ve mentioned before in this space, I typically like to pay down at the quarterback position. That’s especially true on DraftKings, in cash, and on weeks like this when pricing is tight. That leaves us looking at Daniel, at just $4,800. Daniel averages just 14.5 fantasy points per game over his last three games, but he does get his best matchup this week. Oakland is giving up the sixth-most fantasy points per game to opposing quarterbacks, while ranking seventh-worst in opposing passer rating and second-worst in pressures generated per dropback.

For tournaments, I like the idea of stacking Daniel with Allen Robinson, considering Daniel might actually be an upgrade for Chicago’s WR1. Daniel earned a PFF pass grade of 88.4 last week — a number that trumps anything we’ve seen from Mitchell Trubisky across his last 15 games. Last week, Robinson was Daniel’s most-targeted receiver, drawing seven of 30 attempts (23%). Robinson also leads the team and ranks ninth among all receivers in deep targets per game (2.25), while Oakland ranks worst in fantasy points allowed on deep passes. As just the 21st-highest-priced wide receiver on DraftKings, he’s a massive value. 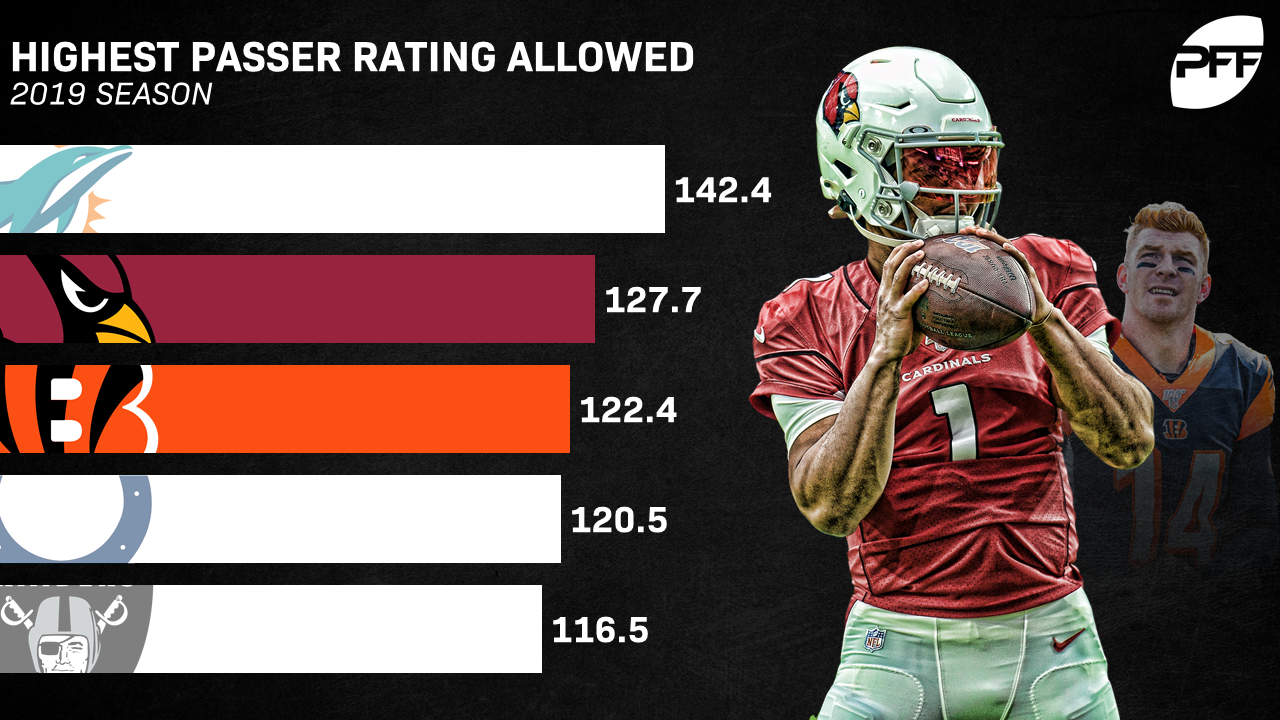 Arizona @ Cincinnati is just a point away from having the highest over/under on the slate (47.5). The quarterbacks in Atlanta @ Houston are more expensive, and will draw more ownership, but I think there’s just as much upside in Murray and Dalton, in what should be a pass-heavy shootout and the fastest-paced game of the slate. Cincinnati's running backs average just 46.3 rushing yards per game, which ranks third-worst, not too far from Arizona's running backs (58.0, sixth-worst). Meanwhile, both quarterbacks get a top-three defensive matchup. Cincinnati’s defense ranks third-worst in opposing passer rating and fantasy points allowed per dropback. Arizona's defense ranks second-worst in both stats and in fantasy points allowed per game. Essentially, two offenses without a run game take on bottom-three pass defenses, in a game that could be a shootout (+/- 3.5 spread), and the top receivers in this game are all mispriced.

When stacking, I'd consider Tyler Eifert, Tyler Boyd, and maybe Auden Tate on Cincinnati’s side. On Arizona's side, Larry Fitzgerald is the obvious top option. David Johnson is involved enough in the passing game to also be considered, and KeeSean Johnson is vaguely in play as a punt option.