Devy rankings can be a great reference for all dynasty fantasy football players to use, even if your league doesn’t actually have roster spots for devy players. Most dynasty players have an idea of who the top players in the 2019 class will be, but if you keep track of how future classes are shaping up it can bring clarity to trade decisions when draft capital is involved.

It’s important that you know my devy ranks are weighted toward players who can help your teams sooner. This means players who aren’t eligible to be drafted in 2019 are discounted in comparison to those who are eligible. Think of this similarly to how you currently view your 2019 rookie picks versus your 2020 picks. It’s similar to the principle of the time-value of money. A dollar today is worth more than a dollar tomorrow – or, perhaps more aptly put, fantasy points today are worth more than fantasy points tomorrow.

Another reason I do this is because another season in college is not a guarantee a player will improve. Coaching changes, injuries, and new recruits challenging for playing time are factors that can impact the lens through which a prospect is viewed.

I explain this because if you see a 2020 player above a 2019 player in my devy ranks, then you can know it’s a player I think could be special from a fantasy perspective. I do have a handful of 2021 player in my rankings, but save one special case in the wide receiver group, the rest are essentially five-star recruits who landed at big programs and should produce once given the chance. A lot can happen in a few years. Some devy rankers I’ve come across are much more aggressive ranking the 2021 class, so you may notice some differences from mine, but it largely comes down to the idea that too much can happen over the next two and a half college football seasons and we barely have any on the field data for those players. I like to use as little guesswork as possible when going through a player value exercise.

Now that you’ve got a handle on my general methodology, let’s take a look at these positional group rankings. 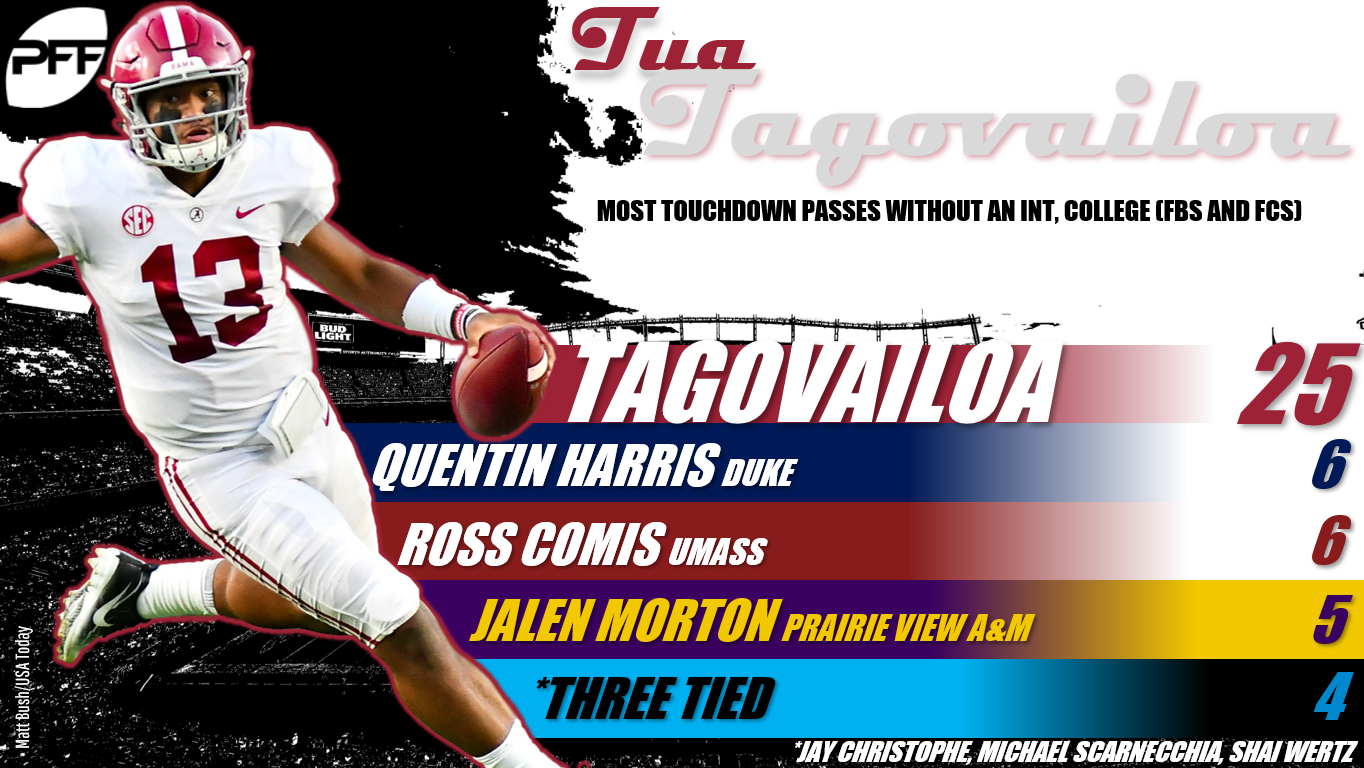 Tagovailoa is one of the most exciting quarterbacks I’ve seen in college football in recent years. A true sophomore, he’s completing over 70 percent of his passes and has a 25:0 touchdown:interception ratio as the leader of the premier program in the country. Some of Tagovailoa’s ranks:

What he’s doing (and the program for which he’s doing it) has him perched atop my devy quarterback rankings despite his ineligibility for next year’s draft. Yes, even after penalizing him for the time-value I discussed earlier, he’s still the cream. I like him that much.

Herbert is draft-eligible next season, but nobody knows whether he intends to declare. He’s trending toward being the first signal-caller off the board if he does declare, and there’s enough positive data in his profile to trust him as a fantasy pick, too. He’ll have started games in three seasons at a Power-5 school and accumulated a nice statistical profile, including a career 52-14 touchdown to interception ratio and nine career rushing touchdowns.

A potential sleeper in the class is Finley out of NC State. A fifth-year senior, he’s an older prospect who will finish his collegiate career with around 1,400 passing attempts and over 10,000 passing yards. He’s also deadly accurate – he leads the ACC in completion percentage and is 10th all-time in the conference for the same metric. There’s comparatively less buzz about Finley versus players like Herbert, Dwayne Haskins, Will Grier, and Drew Lock, so his devy price is pretty attractive if you’re looking to add a player with NFL starting potential on the cheap.

After a very enjoyable multi-year run in which we saw the NFL backfield cupboards get restocked, the devy picture is a bit muddy at the position again. The 2019 class has a number of prospects with fantasy potential, but there are questions marks throughout. Etienne (leads the NCAA in rushing touchdowns and is averaging 7.6 yards per carry over two seasons) and Taylor (leads the Big Ten in every meaningful rushing statistic) have earned my admiration and I’d prefer either of them to any back who will potentially be available in the 2019 NFL Draft.

Henderson is one of the best stories of the 2018 college football season as he’s taken another leap after his promising 2017 campaign. Henderson has rushed for over 170 yards in five of eight games and leads the nation in rushing yards (1148) and yards per attempt (an unholy 10.1 on 114 attempts!). A capable receiver, Henderson also leads the nation in yards from scrimmage as he’s added 211 through the passing game. He’s easily been the biggest climber in my rankings and is now a player who I expect to be a first-round dynasty rookie pick in the spring.

The good news about wide receivers is there is a steady stream of players available over the next three seasons who could prove to be real fantasy difference makers.

Brown leads the SEC in receptions and receiving yards and should widen his lead over the rest of the season as teammate D.K. Metcalf’s season-ending neck injury will result in more passes being funneled Brown’s way. Brown has answered the primary question I had about him entering the season – could he be more consistent? He has at least six receptions in seven of eight games.

True sophomore Shenault leads the PAC-12 in receptions and receiving yards and has added five touchdowns on the ground. Shenault already has four games with at least 10 receptions and 125 receiving yards. Some other notable Power-5 prospects who once accomplished that feat include Justin Blackmon, Michael Crabtree, Jordy Nelson, Marqise Lee, Brandin Cooks, and Amari Cooper. Yea, this guy is good, and he’s going to be a high draft pick when he declares in 2020.

True freshman Rondale Moore leads the Big Ten in receptions and receiving yards and just dismantled Ohio State in a prime-time game to the tune of 170 yards and two touchdowns on 12 receptions. At 5-9 and 175 pounds, he’s undersized by traditional NFL standards, but there’s plenty time for him to grow as he just turned 18 in June.

Tight end has seen a massive overhaul in dynasty over the past 12 months, but I expect the 2019 class to have an impact in the NFL nonetheless. Fant is as close to a lock first-round NFL draft pick next spring as it gets and is the main name for dynasty players to know at this point. He’s a prolific touchdown scorer and has crossed the stripe 17 times in his past 19 games, which would be a remarkable accomplishment for any receiver, let alone a tight end.