San Diego Chargers wide receiver Keenan Allen reacts after a reception against the Detroit Lions during the first half of an NFL football game Sunday, Sept. 13, 2015, in San Diego. (AP Photo/Alex Gallardo)

It was a rough year for Philip Rivers and company, as the Chargers managed just four wins. San Diego struggled to generate a run game, and averaged 41.7 passing attempt per game. Only the Ravens attempted more passes per game.

While it hasn’t necessarily been sexy, Rivers has finished as a top-12 fantasy quarterback in seven of the last eight seasons. Over that span, he has topped 4,000 yards seven times, with his career high of 4,792 coming last season. He also went over the 30-touchdown mark on four occasions. In 2015, Rivers led the NFL in dropbacks (710), passing attempts (661) and completions (437). However, just 45.2 percent of Rivers' yards came through the air. Still, Rivers put up a career-best total with a patchwork receiver corps for much of the year. With a better compliment of receiving weapons, Rivers remains a fringe QB1 option.

The Chargers receiver group is led by Keenan Allen and free agent acquisition Travis Benjamin. Through the first eight weeks of last season, Allen sat sixth in standard scoring and fourth in PPR formats. Unfortunately, his season was cut short due to a lacerated kidney. The good news is that he’s fully healthy and Chargers OC Ken Whisenhunt said Allen is going to be “a focal point” of the offense. The problem for fantasy purposes is that Allen doesn’t necessarily profile as a prototype No. 1 receiver. While he is heavily targeted, those targets typically come in the short and intermediate areas of the field. Last season, he posted an average depth of target of just 8.0 yards, which tied for 106th among wide receivers. Allen makes for a better PPR option, and fantasy drafters should be care to not overvalue him in standard scoring leagues. 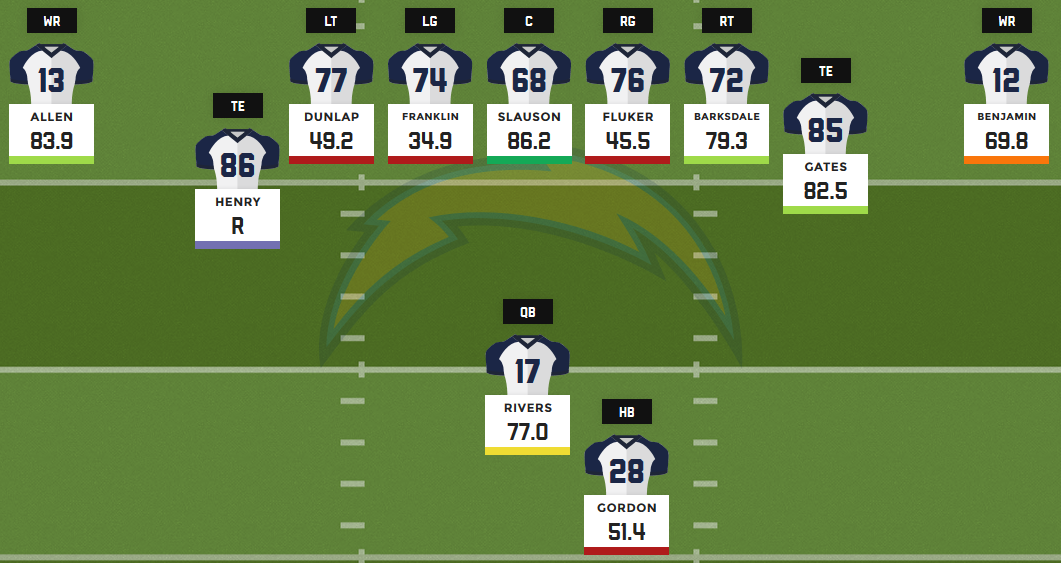 Benjamin gives San Diego a field-stretching presence they lacked in recent seasons with Malcom Floyd in the declining stages of his career. Despite poor quarterback play, Benjamin managed a top-30 fantasy season on the Browns’ wafer-thin depth chart. More importantly, he showed that he was more than just a deep threat receiver, racking up double-digit targets seven times on the season. Benjamin isn’t likely to see that sort of volume opposite Allen, but he now gets to play with one of this generation’s best quarterbacks in and offense that was one of the league’s most pass heavy last season. While there’s certainly appeal here, his week-to-week volatility keeps Benjamin among the WR4s.

Stevie Johnson was slated to play the No. 3 role, but his future sounds very much up in the air after the veteran receiver was carted off the field at Chargers’ practice Sunday. If the injury is serious, Dontrelle Inman would be the next man up on the depth chart. The third-year receiver scored three times last year, and flashed briefly with an eight-catch game in Week 16 against the Raiders. That being said, he’s unlikely to be more than a DFS punt option.

At tight end, Antonio Gates is back for his 14th season with the Chargers. The old faithful fantasy option just keeps going despite being 36 years old. Gates was suspended for the first four games of the 2015 season, but he returned and racked up the eighth-most fantasy points over the last 13 weeks. Though the Chargers re-signed Gates in the offseason, the team did express concerns with the tight end position and ultimately ended up drafting Hunter Henry out of Arkansas. Henry won’t challenge Gates’ role in the offense this season, but the writing is on the wall for Gates’ long-term ouster. Owners in dynasty leagues would be wise to get whatever they can for him. However, in redraft, Gates is a solid and reliable option with a somewhat high floor, but a limited ceiling. He’s still a borderline TE1.

Ask fantasy football players who the most disappointing running back was from last season, and you’re very likely to get Melvin Gordon as the answer. Expectations were high for the former Wisconsin Badger last season, but Gordon floundered, managing just 3.6 yards per carry and ranking just 46th in fantasy scoring before being put on injured reserve with a knee injury after Week 16. To be fair, Gordon forced the seventh-most missed tackles on a per-touch basis and had to run behind the league’s second-worst run-blocking offensive line. Gordon still possesses significant upside, but there was some concern surrounding him after he underwent microfracture surgery back in January. Once the kiss of death, we have seen players successfully return after this procedure. However, the second-year man showed no ill effects of the surgery in minicamp. He also should benefit from the Chargers using more two-back sets this year. Gordon is a strong post-hype sleeper candidate who has the potential to offer big return on investment this year.

[Is it worth taking Gordon in drafts this year? Can he be a sneaky value? Check out our PFF Draft Master tool and try a mock draft, complete with offensive line grades, full projections and all the PFF data.]

Along with Gordon, Danny Woodhead remains in the mix for passing-down duties. Despite only logging 98 carries, Woodhead finished as fantasy's No. 11 running back in standard scoring leagues last year – he was third in PPR scoring. No running back ran more passing routes that Woodhead (397). He also led the positon in targets (96), and led the Chargers in receptions, receiving yards and receiving touchdowns. Of course, a variety of factors contributed to this outcome, including Allen landing on I.R. and the Chargers’ terrible run-blocking. It should also be noted that Woodhead is entering his age-31 season. A repeat top-12 performance isn’t likely for Woodhead, be he’ll remain involved enough in the offense to retain fantasy value, especially in PPR leagues where he makes for a solid RB2 option.

The Chargers really struggled on the defensive side of the ball last season, but there’s still plenty of opportunity for IDP value on this roster. Corey Liuget fits the mold of an old school 3-4 defensive end who offers a relatively high tackle floor but low sack ceiling. He’s a limited upside DL2 option. Melvin Ingram is coming off a double-digit sack season, but his linebacker designation limits his IDP potential. Manti Te’o has the makings of an annual disappointment, but there could be something with second-year man Denzel Perryman. Last year, he led all linebackers with a tackles per opportunity rate of 22.6 percent. That’s a tackle on nearly a quarter of his snaps. If Perryman earns a three-down role, he could be this year’s biggest breakout IDP option. At defensive back, there’s some potential that Jahleel Addae surfaces on the IDP radar with Eric Weddle now in Baltimore.