Who are the best fantasy football plays for building an optimal DFS lineup in Week 17 of the 2018 NFL season? As we do every Saturday, this piece brings you the DFS locks of the week. 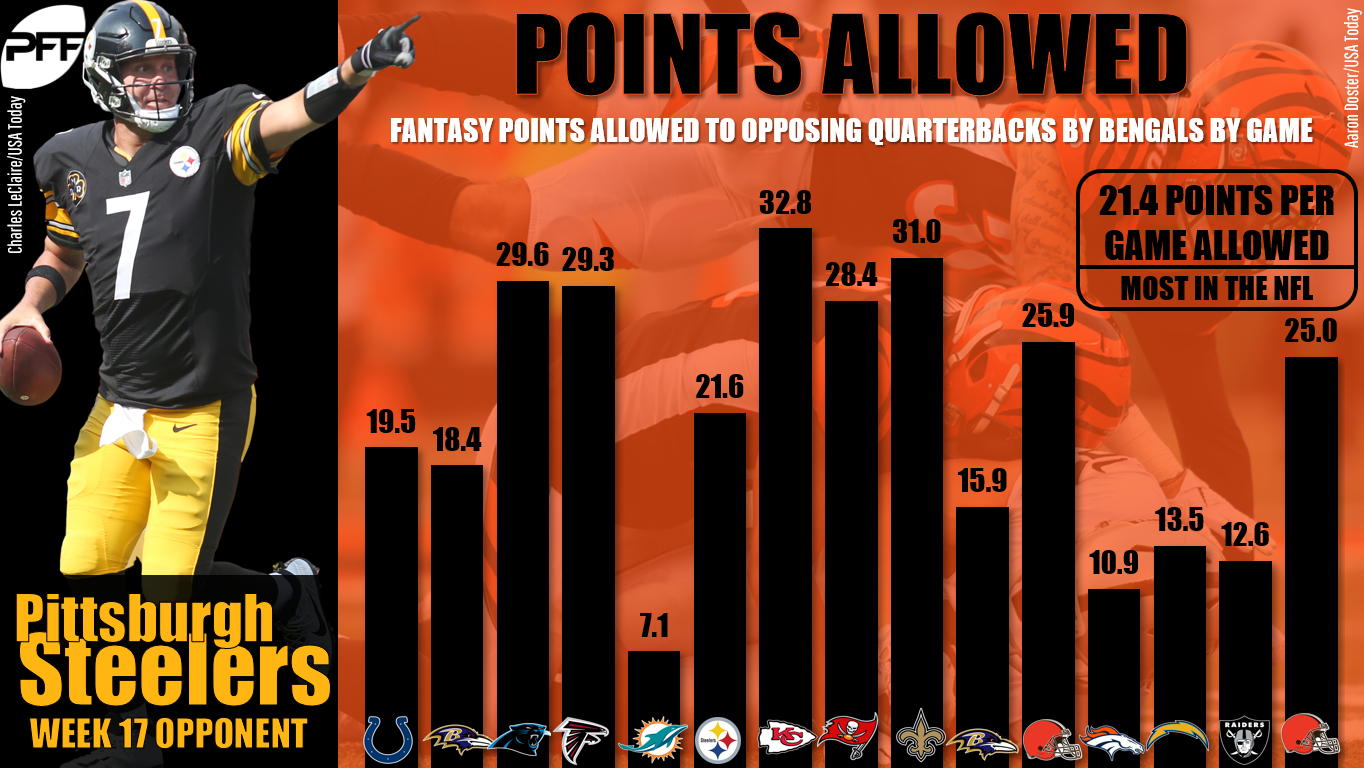 Roethlisberger needs to win (and get some help) to get into the playoffs, so you can be assured that the Steelers will be a full-go on Sunday. The lowly Bengals have allowed the fourth-most fantasy points per dropback and most overall fantasy points to quarterbacks this year, including the second-most touchdowns allowed (31).

Jackson, one of the top value plays on the slate, can be safely inserted as your Week 17 DFS quarterback. The DFS sites just aren’t pricing him up despite the fact he leads all quarterbacks in fantasy points per dropback, with 0.78. That’s better than Mahomes this year. It’s better than Deshaun Watson last year or Cam Newton in 2015. In fact, he’s on pace to set a PFF-era record in points per dropback. And we can expect a full complement of dropbacks for Jackson this week as the Ravens need to win.

Barkley will be fed — he had 26 touches last week — and should face backups on defense and a favorable game script as the Cowboys prepare for the postseason. The Giants are six-point home favorites, and Barkley is the safest bet among the expensive running back options.

Conner returns from injury at an ideal time for DFS. He’s priced a little lower than he should be, the Steelers need to win, they are 14.5-point home favorites, and they are playing the Bengals, who have allowed the second-most fantasy points to opposing running backs this year, including an embarrassing 131 rushing yards per game allowed since their Week 9 bye.

Carson isn’t the cheapest Week 17 option, but he’s still not appropriately priced given his workload and the rest of the Week 17 running back landscape. Carson’s last three games have resulted in 22 carries, 22 carries, and 27 carries with at least 90 yards and a touchdown in all three games. His targets are inconsistent — he has no targets in two of his last three but six targets in the other — but the rushing volume, the flirtation with 100 yards on a weekly basis, and the touchdown upside make him one of the safer plays of the week. 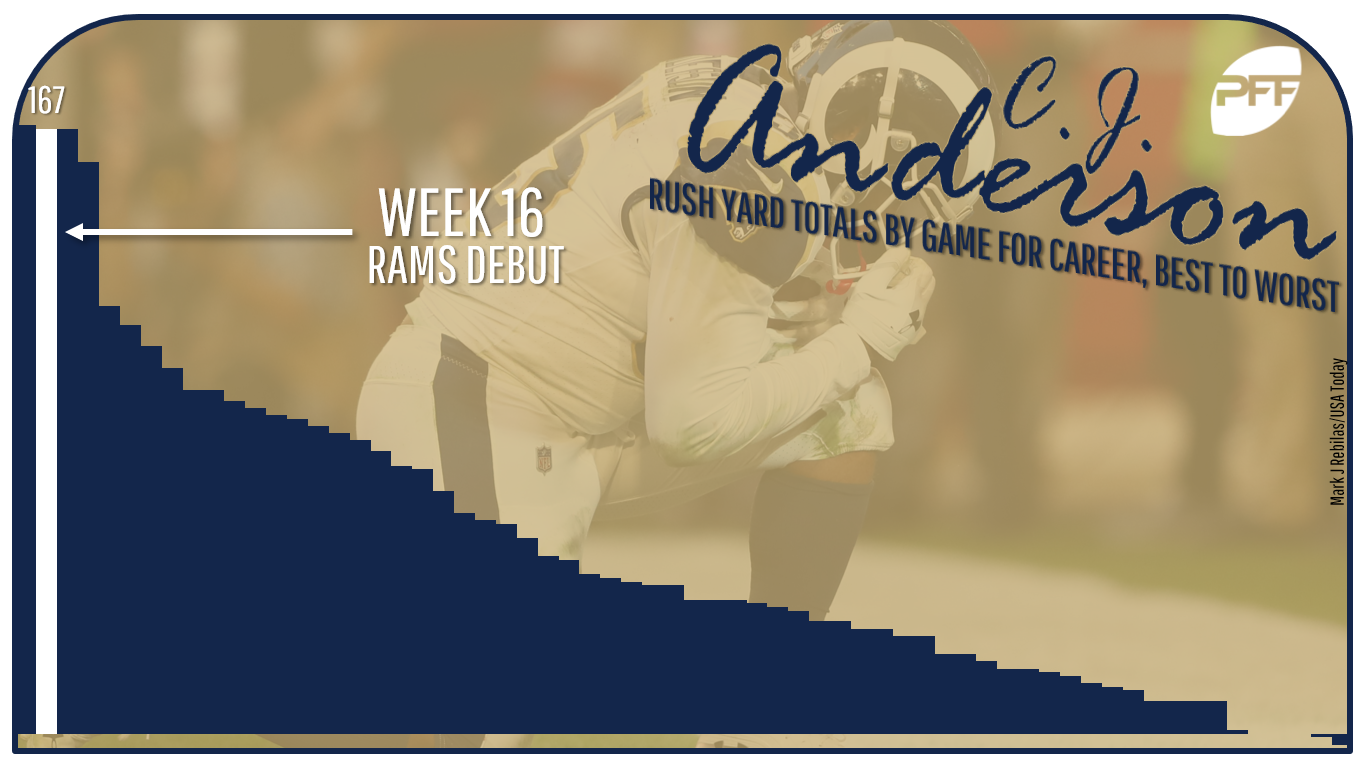 No Todd Gurley was no problem for the Rams rushing attack last week and Anderson went ham on the Cardinals for 167 yards and a touchdown on 20 attempts (8.4 YPC average). He’ll be the starter again in Week 17 and even though Anderson saw a price bump, he’s still in the lower-mid price range on major DFS sites. He has an unimposing Week 17 matchup against the 49ers, who have allowed the 10th-most fantasy points to opposing running backs this season.

I noted how Adams is within striking distance of a few Packers all-time records on Sunday — including receptions and yardage — and with Aaron Rodgers playing all the snaps, Adams can be fully trusted. I’d expect Rodgers to force-feed Adams the ball until he gets the yardage record (133 yards needed). And with 13 touchdowns in 15 games, Adams is a safe bet to score, too.

Edelman is the lone bankable commodity in New England, with double-digit targets in six of his last eight, including each of his last three contests. Edelman has had a solid nose for the end zone this season too with 0.46 touchdowns per game. Edelman gives you one of the highest floors at the receiver position with access to a ceiling he rarely displayed in previous seasons.

You can’t speak of high floors at the receiver position without mentioning Woods, who has at least four receptions and 60 receiving yards every week since Week 2. This week, Woods draws the 49ers secondary, which has allowed the sixth-most fantasy points per target to receivers and eighth-most fantasy points overall. Receivers have also scored a league-high 23 touchdowns against San Francisco this season, including 12 touchdowns surrendered to the position over the last six weeks.

The Raiders have given up the most fantasy points per target to tight ends this year, and Kelce is averaging nearly nine targets per game — second-most among all tight ends. Kelce needs only 54 yards to break the single-season record for receiving yards by a tight end, and he’s reached that mark in all but two games this year. It helps, too, that he plastered the Raiders for 12-168-2 earlier in December. 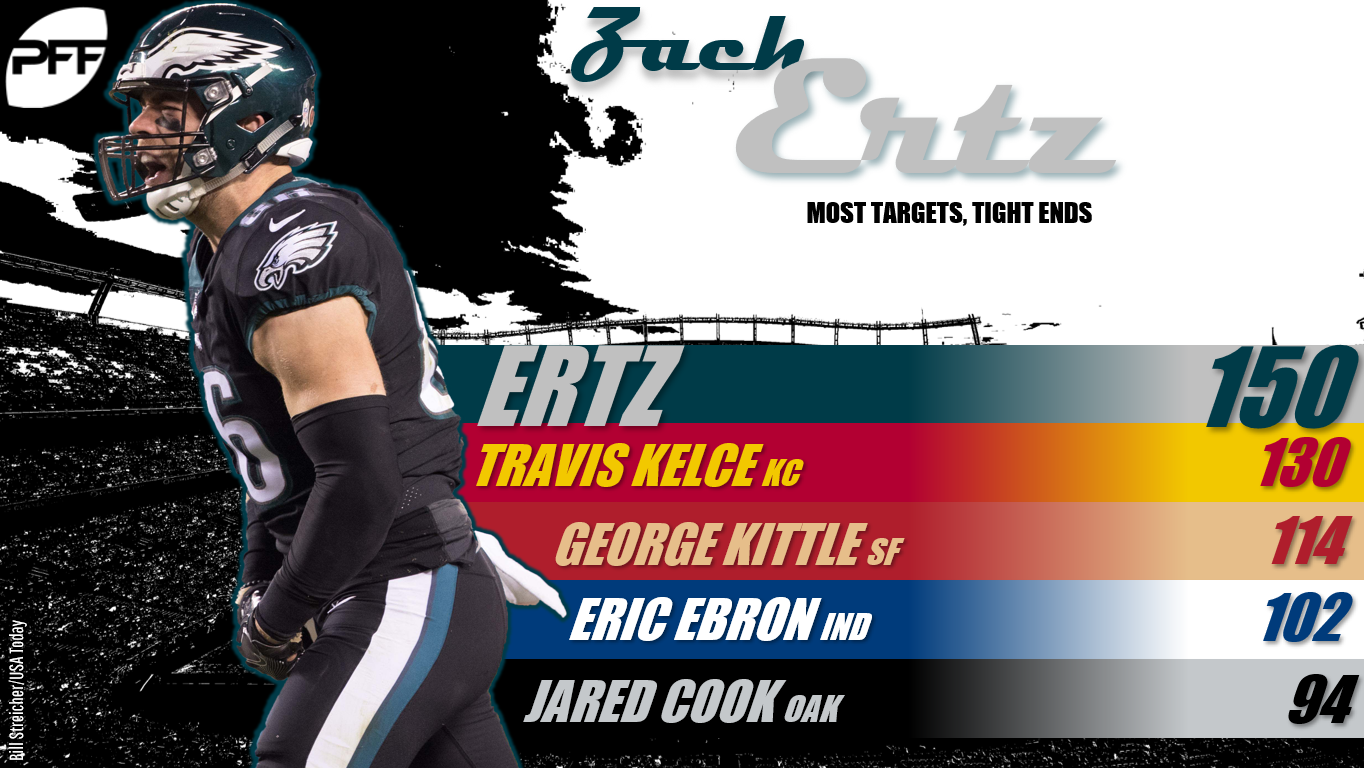 Ertz’s 150 targets rank first among tight ends (he’s 20 ahead of Kelce, who has the second-most) and fifth among all receivers. His 113 receptions are second in the NFL. He has a high floor and GPP-winning upside, which we saw last week when he erupted for 12-110-2.

With Odell Beckham Jr. ruled out for Week 17, we can once against fire up Engram in DFS, who has shined in OBJ’s absence with lines of 3-77-0, 8-75-0, and 6-87-0. Dallas has been slightly below-average against tight ends on a per-target basis this season, but things could get ugly for them if they rest starters for all or most of the game.