Despite the title of this article, it’s never too early to dig into ADP trends for the coming season and leverage PFF's fantasy football rankings. There are months to go before we get into the thick of seasonal drafting and DFS analysis, but dynasty drafts and early offseason best ball leagues are already up and running.

In this analysis, I’m leveraging the individual draft data I’ve collected from FFPC best ball leagues that started this offseason (yes, there have been quite a few) and the hundreds played last year. The data reveal some significant trends and themes this season that, if identified early, could be the key to being ahead of the curve.

You pay up for certainty in early drafts

One thing I noticed immediately while combing quarterback ADPs year-over-year was how many had risen (gotten better). Stepping back and taking a view across all leagues, I found that quarterbacks generally go much earlier in drafts during this part of the offseason.

The first quarterback off the board during September of last year had an average ADP of 38.1. That ADP has risen to 23.1 so far this offseason. The ADP trends are even more pronounced as you track through to the 10th quarterback taken.

The quarterback position provides the most certainty of any at this point in the offseason. We don’t know where the top running backs and wide receivers will land in free agency and the draft, meaning we don’t have a firm grasp on what the eventual depth charts and workloads will look like for most backfields and wide receiver corps. We do know who the starting quarterbacks will be for at least half of the NFL, meaning those certain roles become more valuable after the elite players at other positions are off the board.

You can also see a narrowing of draft capital spent on quarterbacks by positional rank. The difference between QB1 and QB10 in the late offseason was 70 draft slots, yet it’s only roughly half that in early offseason drafts. The relative cost of top quarterbacks is lower in the early offseason, meaning spending picks on Patrick Mahomes and Josh Allen aren’t going to cost you as much now, relative to waiting, as it will later this year. This might be the best time of the offseason to lock in elite quarterback play.

We’ve heard for the last few years that Trevor Lawrence, the presumed No. 1 pick, is a generational prospect. It looks like early best-ball drafters are listening.

Lawrence has a current positional ADP of QB12. At the equivalent time last offseason, No. 1 pick Joe Burrow was QB21. There was probably more uncertainty that Burrow would indeed be the first pick compared to Lawrence, but Burrow’s positional ADP only rose to QB18 at the end of the offseason when he was locked into a Week 1 starting role.

Looking further back, Lawrence is tied for the strongest rookie ADP we’ve seen in 10 years, and those historical numbers are from the end of the offseason when there isn’t any uncertainty about starting roles.

It’s not just Lawrence who is catching the rookie quarterback hype, as other presumed top-10 picks Justin Fields and Zach Wilson are being drafted at QB22 and QB28, respectively. There were comparable rookie classes with multiple top-10 picks in 2020 and 2018. In 2020, Justin Herbert and Tua Tagovailoa were going as the QB32 and QB33 during February. In 2018, Baker Mayfield, Sam Darnold and Josh Allen were the QB23, QB27 and QB37.

This is a potentially special quarterback class, with highly touted prospects who can all contribute on the ground. But with the quarterback position as deep as ever, paying up for rookies — who typically struggle before making a second-year leap — doesn't seem wise.

The flip side of paying up for certainty are the values available if you’re willing to embrace risk. There are two quarterbacks currently being drafted far below how they performed as starters in 2020, both adding tremendous value on the ground. These two are also the presumed, but far from locked in, starters at this point in the offseason.

On a points-per-game basis, Jalen Hurts and Taysom Hill as starters were the QB5 and QB10 in fantasy scoring during their four starts last year. So far this offseason, they’re going as the QB12 and QB30. 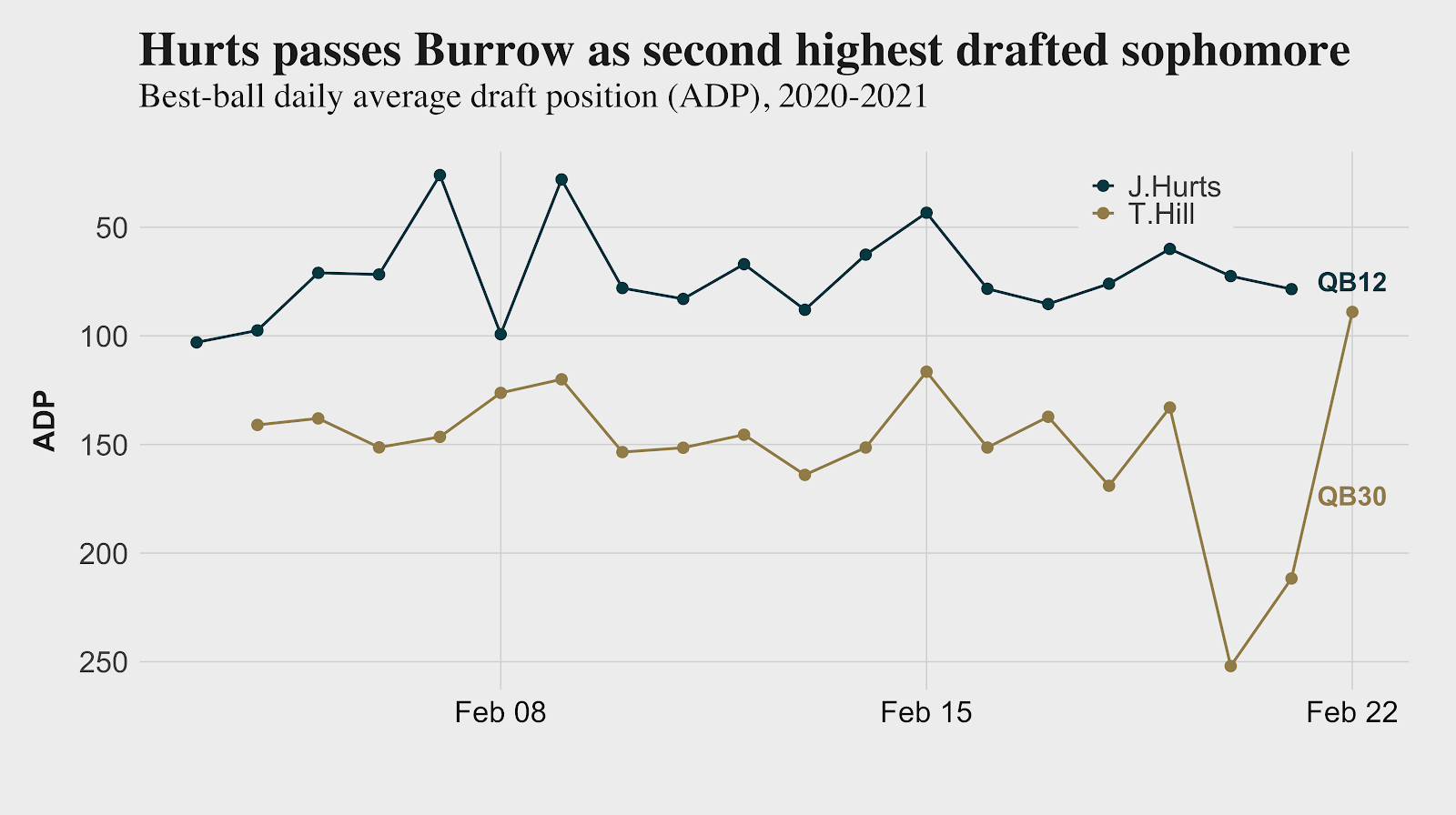 With Carson Wentz out of the picture, the path to starting has opened for Hurts, and Drew Brees’ presumed retirement announcement should come sometime in the near future. Neither is locked in as a starter, but both have the potential to win leagues in extended starting roles with full offseasons building their playbooks around them.

Josh Allen and Aaron Rodgers are veterans on the rise

Looking at the change in ADP from September 2020 to February 2021 shows lots of movement for second-year quarterbacks expected to take the next step. Less common are veterans with big jumps in their ADPs. This season, the biggest moves have come from Allen and Rodgers, entering their fourth and 16th seasons. 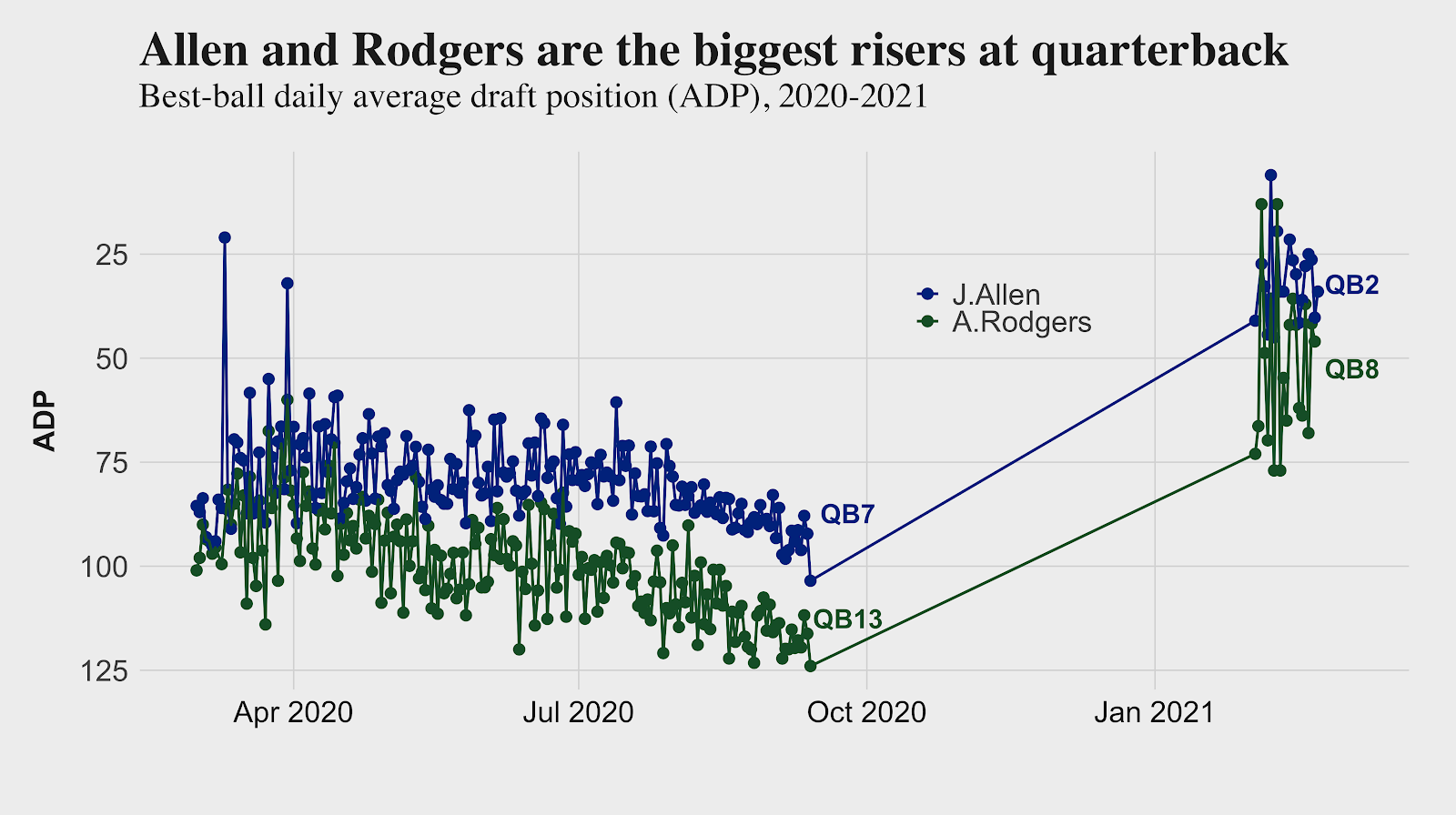 Allen has jumped all the way to QB2, behind only Patrick Mahomes. Rodgers’ jump from QB13 to QB8 isn’t as meaningful, but it’s still significant for a quarterback who doesn’t provide the type of high-value rushing volume that has become more prevalent in the NFL.

I don’t think you need to necessarily fade Allen or Rodgers in drafts this season, but it helps to keep recency bias in mind and our collective tendency to overshoot in reassessments. The biggest veteran risers last offseason were Lamar Jackson (more on him below) to QB1 and Russell Wilson to QB5. They’re now being drafted at QB4 and QB9 for the 2021 season.

Jackson has taken the biggest relative dip in ADP year-over-year, going from the QB1 and being drafted in the teens to QB4 around 40th overall. 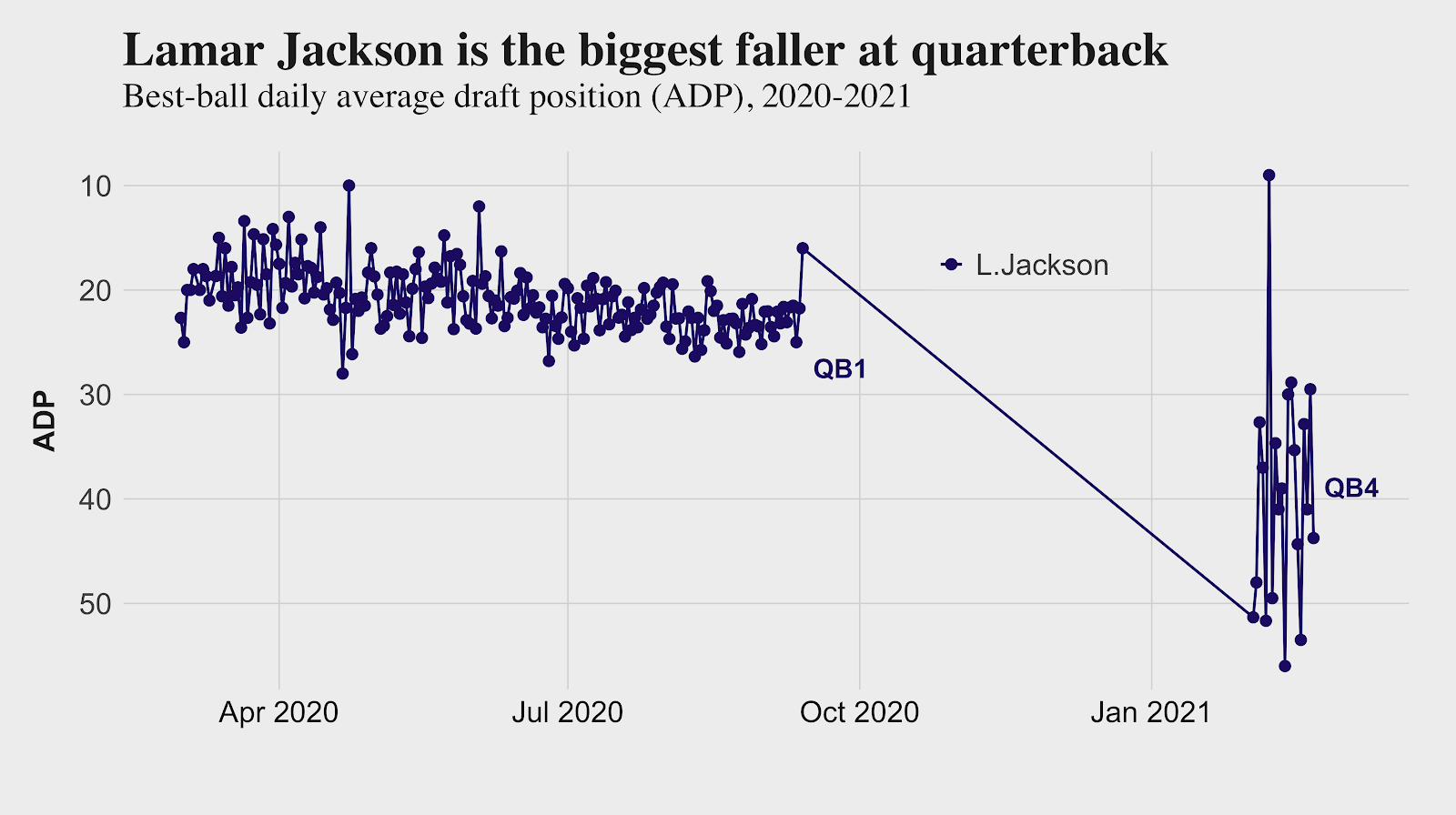 Jackson didn’t have the same level of passing efficiency as his MVP season in 2019, but his rushing and passing volume only took slight hits. Jackson still has the ability and profile of a potential league-winner, and the chance for a refreshing of scheme and addition of much needed weapons — at wide receiver in particular — could boost Jackson back to leading form.