Despite the title of this article, it’s never too early to dig into ADP trends for the coming season and leverage PFF's fantasy rankings. There are months to go before we get into the thick of seasonal drafting and DFS analysis, but dynasty drafts and early offseason best ball leagues are already up and running.

In this analysis, I’m leveraging the individual draft data I’ve collected from FFPC best-ball leagues that started this offseason (yes, there have been quite a few) and the hundreds played last year. The data reveal some significant trends and themes this season that, if identified early, could be the key to being ahead of the curve.

Projections are an art and a science, and with running backs they tend to be overly enamored with second-year breakouts. My analysis last offseason showed that second-year backs are the highest-priced when looking for RBs who can potentially break out, but the most value lies with those who failed to make that second-year leap and have been left for dead by the fantasy community.

There are six second-year running backs currently drafted among the top-16 at the position, yet only one of those six finished in the top-16 last season in PPR points per game (Jonathan Taylor, RB9).

Surely some of the second-year darlings will break out this year, but it might be best to fade them in favor of more attractive targets.

Buying the third- and fourth-year breakouts

The research on breakout running backs referenced above didn’t like second-year value, but it showed lots of potential for third- and fourth-year backs.

Much of the value discussion revolves around price, and the lower sticker cost for third- and fourth-year backs can be seen in recent best-ball drafts.

All of these backs have shown themselves to be productive when given the opportunity, and all of them could fall into significant workloads in 2021. Some, like David Montgomery, are still discounted by drafters despite being heavily productive last season (RB8 in PPR points per game). If you’re willing to hold out hope for valuable backs who have disappointed to start their careers, you'll find plenty of options this season.

Clyde Edwards-Helaire poised to bounce back

More than any other back, Edwards-Helaire benefited from offseason events. First, he went from the third- or fourth-highest-rated running back on many draft boards to the first selected by the offensive-minded Kansas City Chiefs. Then, backfield-mate Damien Williams chose to opt out of the season, leaving the dynamic rookie a presumed starter's workload. Unfortunately for drafters enamored with Edwards-Helaire’s potential, he didn’t come particularly close to living up to his RB6 draft position.

By the looks of early offseason fantasy drafts, many have decided they won’t be fooled again. 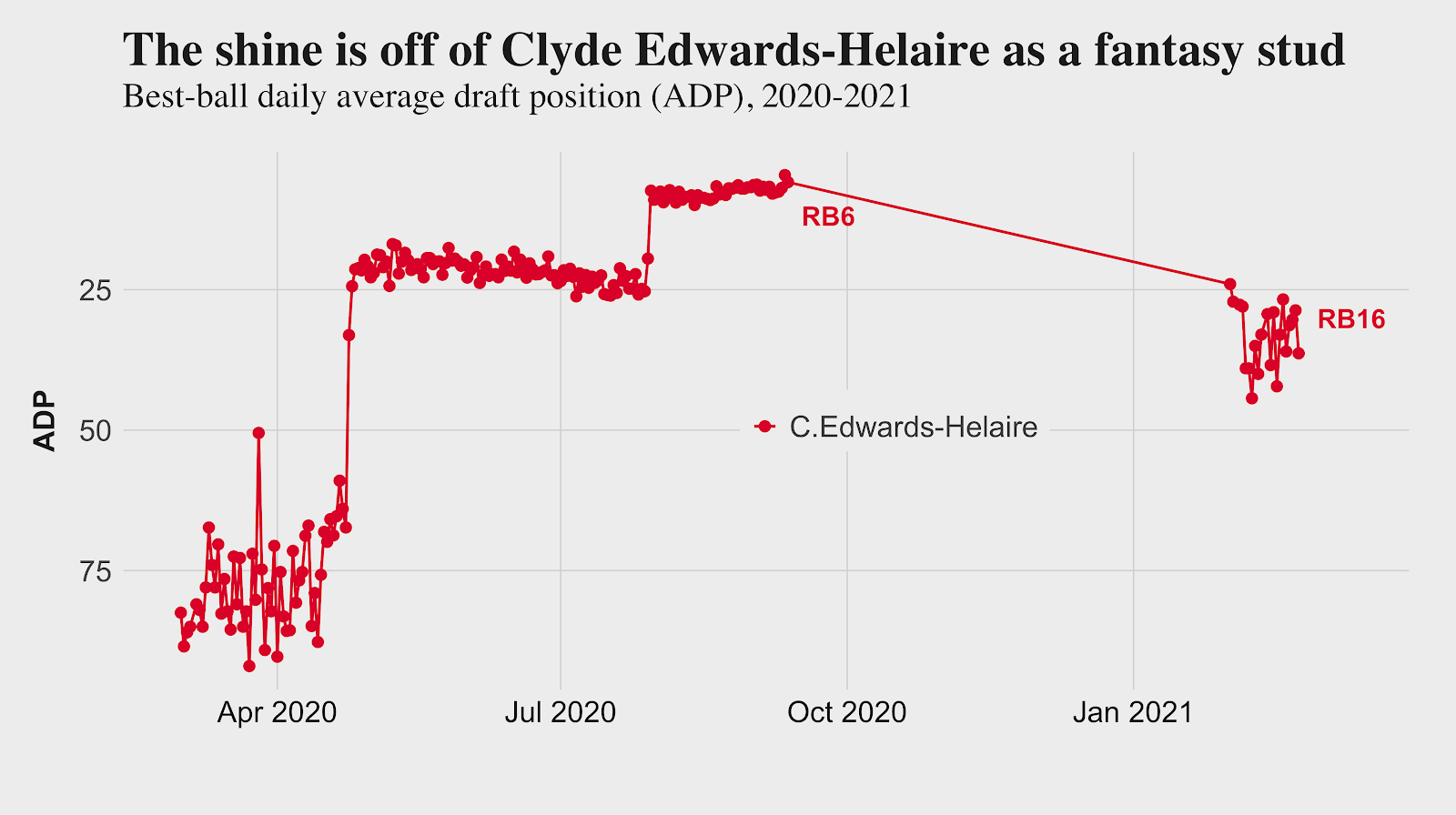 At RB16, Edwards-Helaire is a lowly drafted running back, but it’s a significant fall considering how high of an expectation he had going into the 2020 season. Williams is back in the fold this year, so some discount to Edwards-Helaire's price is appropriate. But he shouldn’t be going at a lower draft position than he was last year before Williams opted out. Edwards-Helaire has had a full year in the system to accustom himself to NFL life, and he’s still part of the most powerful offense in the NFL.

Edwards-Helaire had the 15th-best expected fantasy points last year based on his workload, despite only playing in 13 games. The opportunity is there for drafters willing to look past one poor year and bet on the talent that made Edwards-Helaire a first-round pick.

So much of a rookie running back’s ADP is based on his draft position and landing spot. At this early stage, we think we know who the top selections will be, but we’re often wrong.

Looking back at last offseason, drafters were fairly sure that either D’Andre Swift, Jonathan Taylor or J.K. Dobbins was going to be the top selection in the best landing spot, but that didn’t happen. Edwards-Helaire rocketed up draft boards when he turned an outside chance at being a first-round pick into reality, and the other rookies saw their draft positions stagnate or fall. 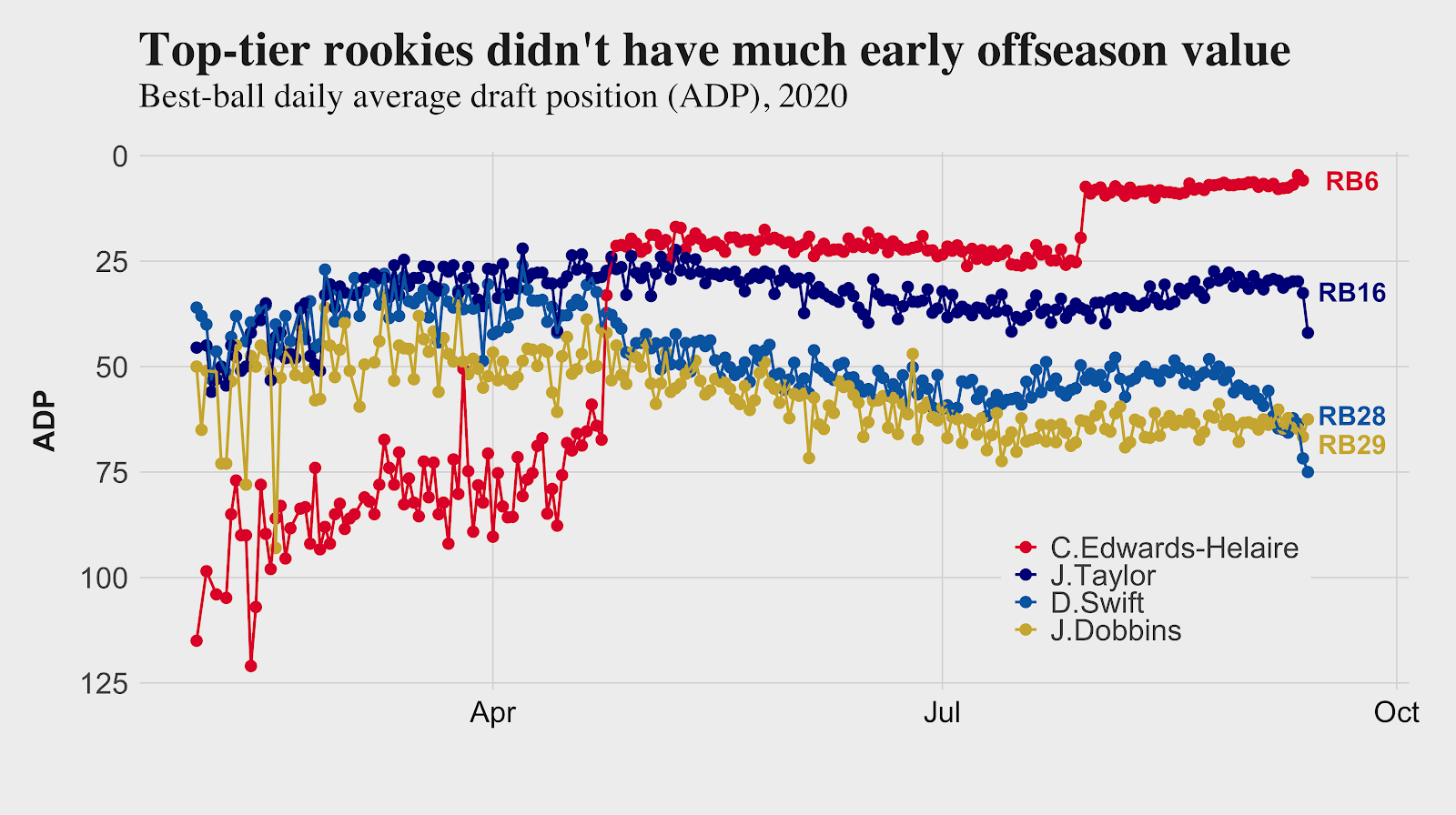 One of the keys to drafting this early in the offseason is to allow yourself upside for unexpected events. If Najee Harris or Travis Etienne are drafted early and fall into good landing spots, they will have some appreciation in ADP. But their baseline prices are high enough that any potential upside is limited. Javonte Williams, on the other hand, might be just as good of a prospect, but at a discounted price. 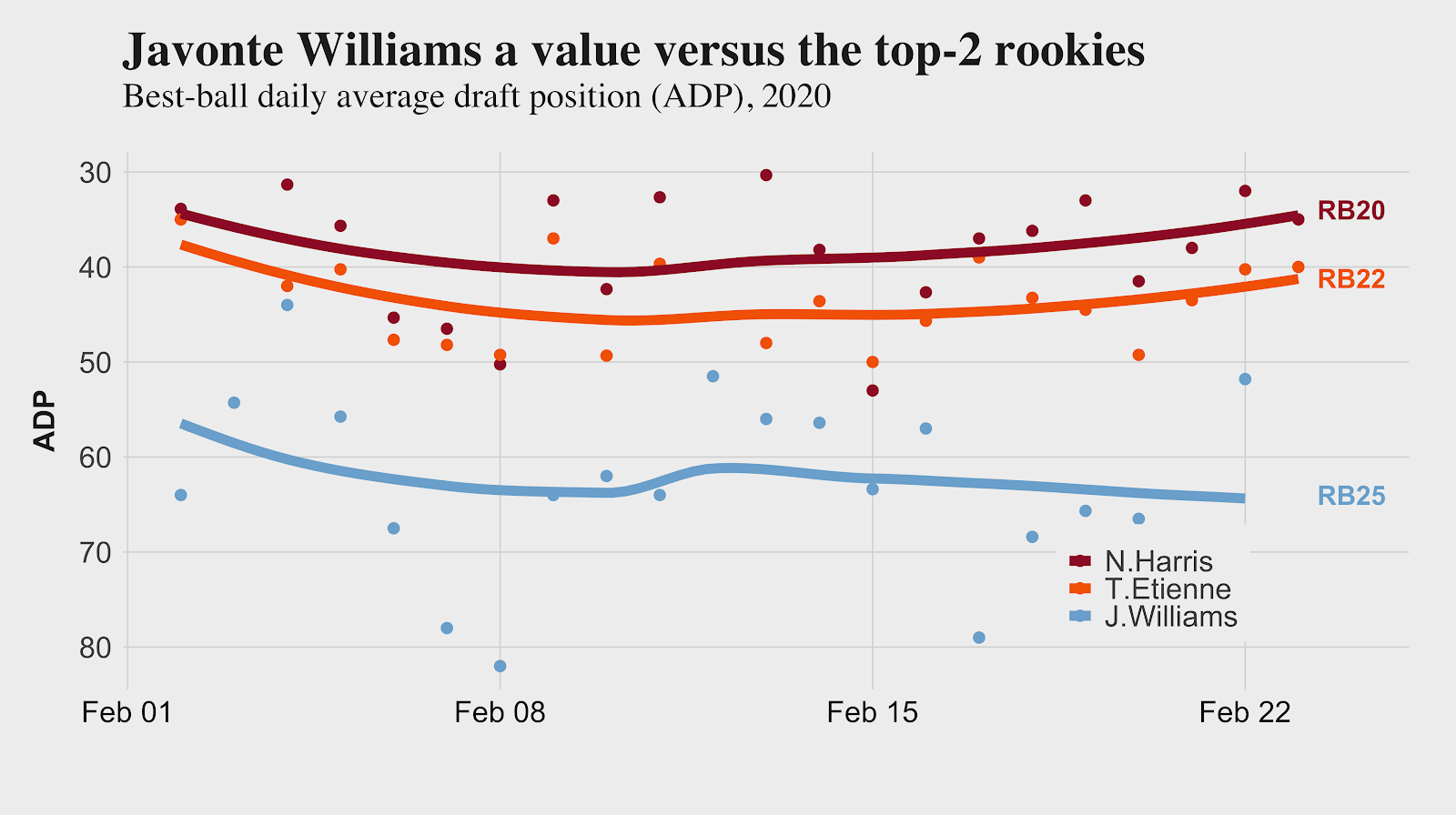 Williams is the No. 2 running back on the PFF Big Board, and draft expert Daniel Jeremiah thinks he could be the first running back off the board come April. In 2020, Williams logged the highest PFF rush grade since we started grading college players in 2016; he also had the second-highest forced missed tackle rate over the same period. Williams is a little under the radar at the moment, but strong pro day results could lead NFL evaluators to push him up to the top of boards as a prospect without any major flaws.