Fantasy Football: 2021 NFL rookies who are undervalued according to draft position

Leading into the 2021 NFL Draft, I looked at the historical relationships between fantasy football average draft position (ADP) and NFL draft position for running backs and wide receivers, and then I compared the 2021 classes for each position against historical trends. Five of the six players highlighted as being undervalued by ADP have risen sharply after the draft.

The relationship between fantasy ADP and real-life draft position is fairly strong and linear. Therefore, I used seven years of fantasy football historical data to build a valuation curve between the two. We can see when fantasy drafters have been too low on a player who went earlier in the NFL draft and vice versa.

Even with perfect knowledge of actual draft positions, there are still a handful of running backs and wide receivers who are undervalued versus draft positions. Some of the value disconnection is based on perceptions of poor landing spots, and some is due to a fundamental disbelief in how the NFL views the players' likelihoods of success. Each is a valid concern, though both can be overplayed in the minds of fantasy drafters.

Here are the updated plots of the 2021 draft classes for running backs and wide receivers. The ADPs on the plots are from drafts conducted since May 2, the day after the 2021 NFL Draft concluded. 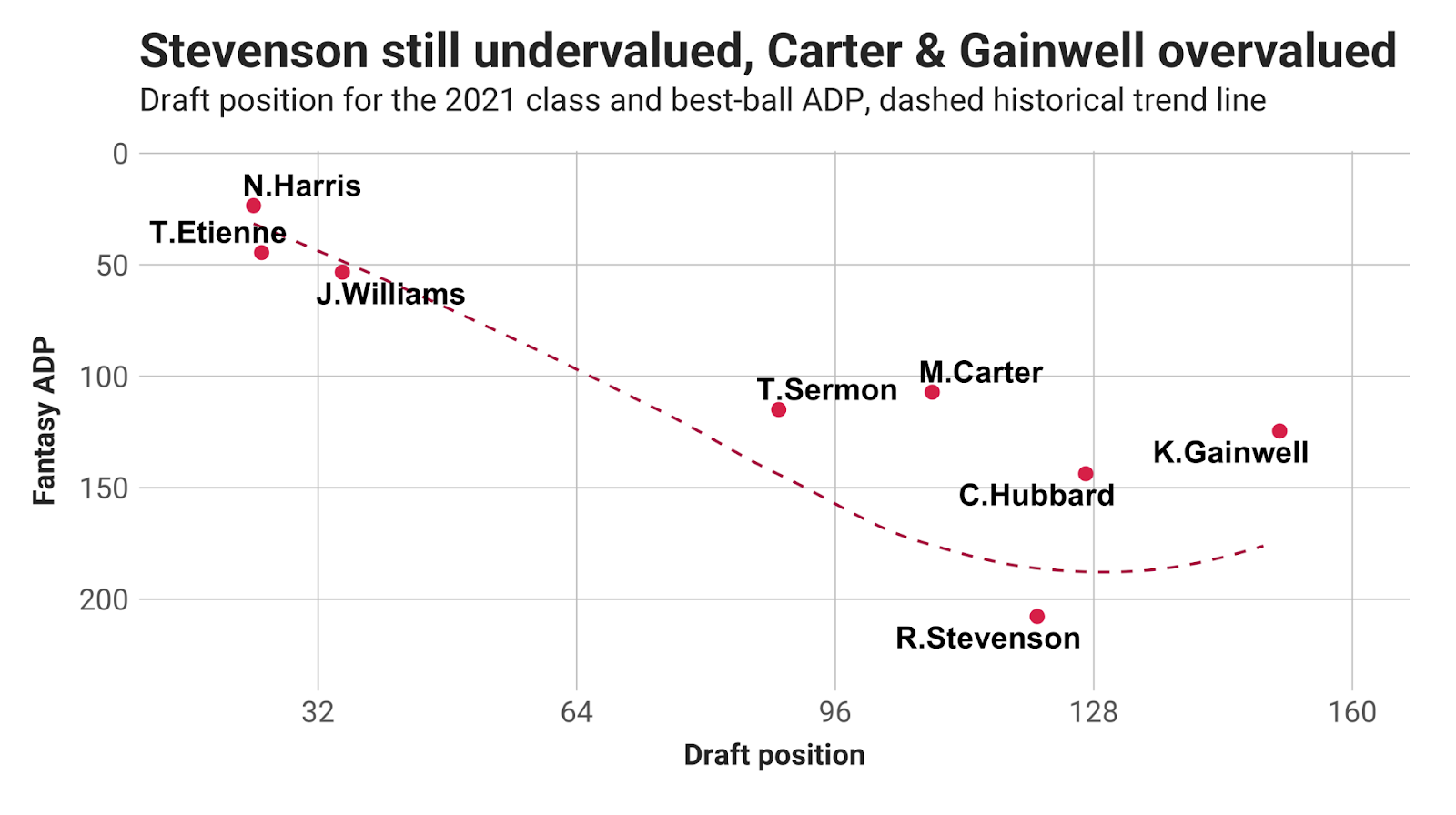 The biggest running back winners, in terms of ADP, from the 2021 NFL Draft were Trey Sermon, Michael Carter, Rhamondre Stevenson and Chuba Hubbard, two of whom I identified pre-draft as undervalued.

Stevenson is the lone back of the group still undervalued versus the historical trend line, likely based on the perception of a crowded backfield in New England. I can see the case for drafting Carter before Stevenson, despite the fact they were both taken in the same round, but the cases for Hubbard and Kenneth Gainwell are murkier.

Hubbard has a decent ceiling, but that value is entirely contingent on an injury to workhorse Christian McCaffrey. Gainwell was the fantasy RB4 pre-draft and then wasn’t selected until the fifth round in the 2021 NFL Draft (RB9). He’ll likely mix in on passing downs, but there’s no assurance that he’ll be heavily involved — and he doesn’t profile as a big enough back to take on significant carries in the NFL.

Kene Nwangwu is absent from fantasy ADP despite being a fourth-round pick. His situation sets up similarly to Hubbard’s, sitting behind Dalvin Cook, fantasy’s RB2. There’s also Alexander Mattison potentially blocking Nwangu’s path, but the Minnesota Vikings wouldn't have drafted Nwangu if they felt set with Mattison. 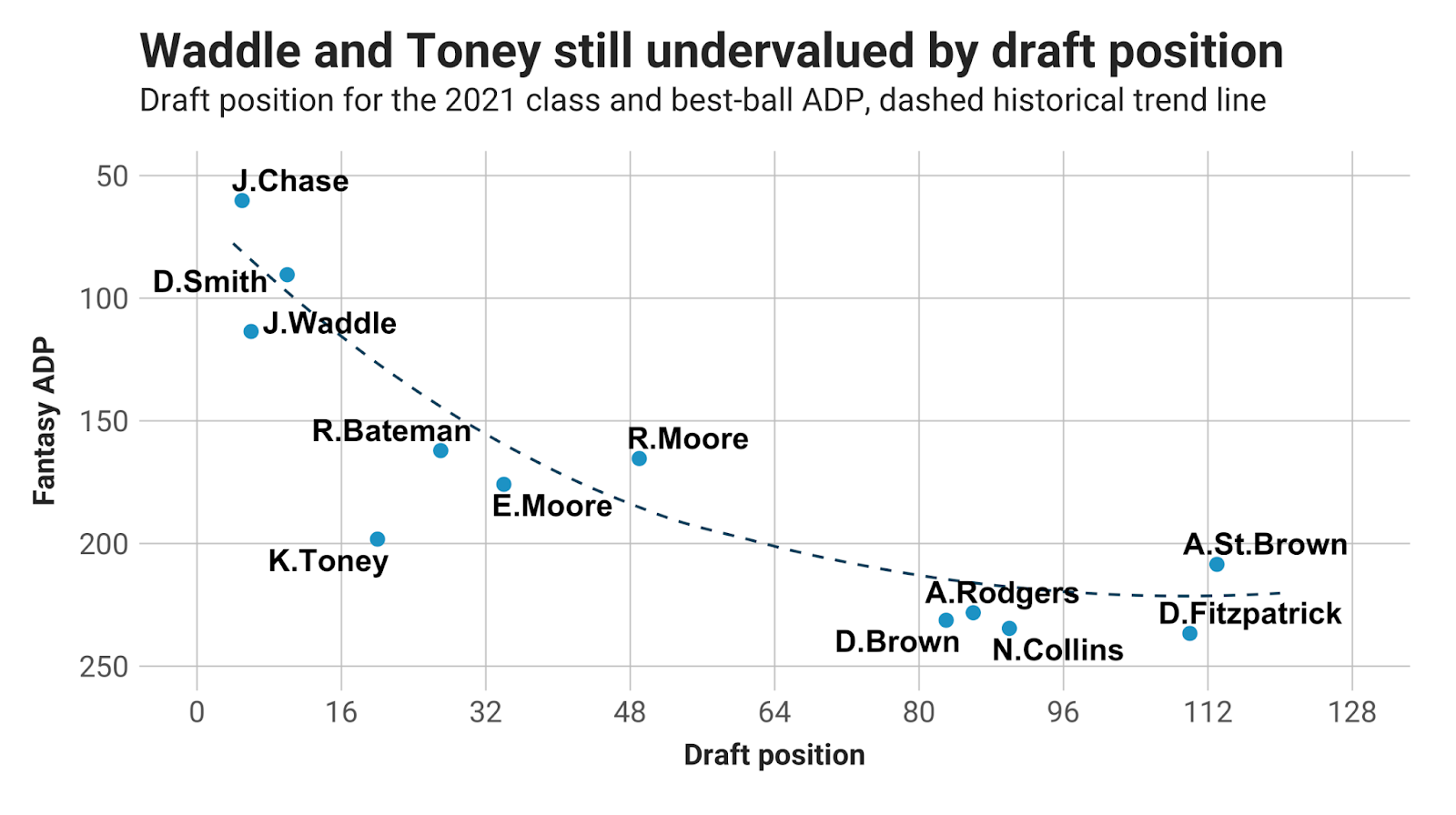 I identified Jaylen Waddle, Elijah Moore and Kadarius Toney as values in best-ball leagues heading into the draft, and all three saw their ADPs climb post-draft.

Toney still has the biggest discrepancy in fantasy ADP and NFL draft position. My wide receiver prospect model didn’t love Toney, and there are a lot of mouths to feed for the New York Giants. That said, should he really have an ADP only slightly higher that of Amon-Ra St. Brown? Toney was a first-round pick, 20th overall. St. Brown went in the fourth round. You can’t ignore opportunity, but it’s far less important for wide receivers than running backs. As long as a receiver is on the field, he has a chance to earn targets. Generally, first-round receivers are better target earners than fourth-round wideouts, even against stronger competition.

Rashod Bateman’s ADP didn’t move much after the draft, which surprises me. If there was a true poor landing spot, it was the Baltimore Ravens. The Ravens are the most run-heavy team in the NFL, and none of their wide receivers have been able to gain fantasy relevance, even with outsized target shares. I’d never want to bet against Bateman, but I can’t help but notice when markets underreact to relevant information.

Waddle’s ADP moved up slightly after the draft, but not seemingly enough. He has some target competition from Will Fuller V, DeVante Parker and Mike Gesicki, but is it much worse than what Ja’Marr Chase faces with the Cincinnati Bengals? Whether or not we agree, Waddle was selected only one spot after Chase in the NFL draft, yet his ADP is almost five rounds lower. I’d heavily favor Chase to outproduce Waddle in 2021, but I love the risk-reward of the latter right now.