My Guys: Ben Linsey's top targets in the 2022 NFL Draft

Most of the fun in the NFL draft process comes from generating opinions on prospects and finding out where you differ compared to the consensus. These are a few of the players who I’m higher on than most, ranging from those who will likely come off the board in the first round to those who could slide into Day 3.

Bell’s draft stock has taken a nosedive, as the plot below of his expected draft position over time from Grinding the Mocks illustrates. 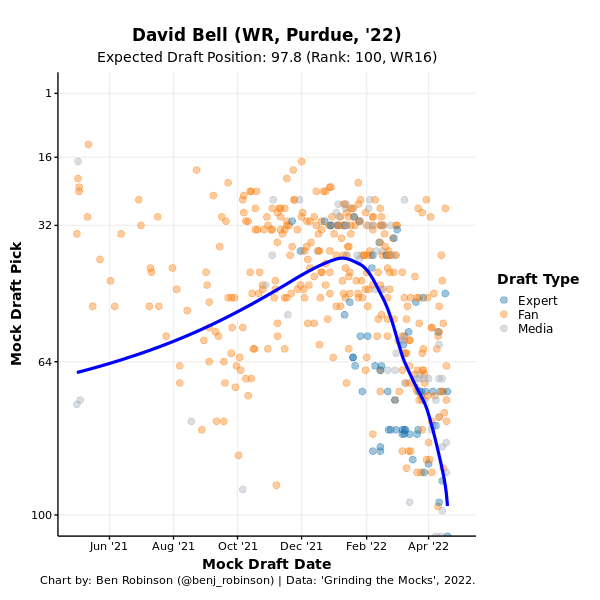 That’s what happens when you run a 4.68-second 40-yard dash — an eighth-percentile mark at the position — but there’s plenty of reason to believe that mediocre time will only create value for teams smart enough to overlook it late on Day 2 or early on Day 3. Bell did put up a 1.56-second 10-yard split (63rd percentile among wide receivers), which has proven to be the more important number when projecting NFL production.

Speed isn’t where Bell wins, though, and that’s fine. There are plenty of highly productive NFL receivers who didn’t light the world on fire in the 40-yard dash.

Bell cleared 80 receptions and 1,000 receiving yards as a true freshman with Purdue in 2019, and he put up three consecutive seasons with a 77.0-plus PFF receiving grade. He’s a sure-handed, natural receiver who showed signs of improvement as a route runner in 2021. That skill set is worth betting on during Day 2 despite some athletic limitations.

The 2021 Doak Walker Award winner isn’t exactly a hidden gem, but it doesn’t seem like Walker is getting the same kind of first-round buzz as top backs in previous seasons, or that fellow 2022 prospect Breece Hall has gotten this year.

Maybe the league is wisening up, but if Najee Harris, Travis Etienne, Clyde Edwards-Helaire and Josh Jacobs garnered first-round interest, then Walker should, too. He’s one of the best pure runners to come out of college football in the past five years. 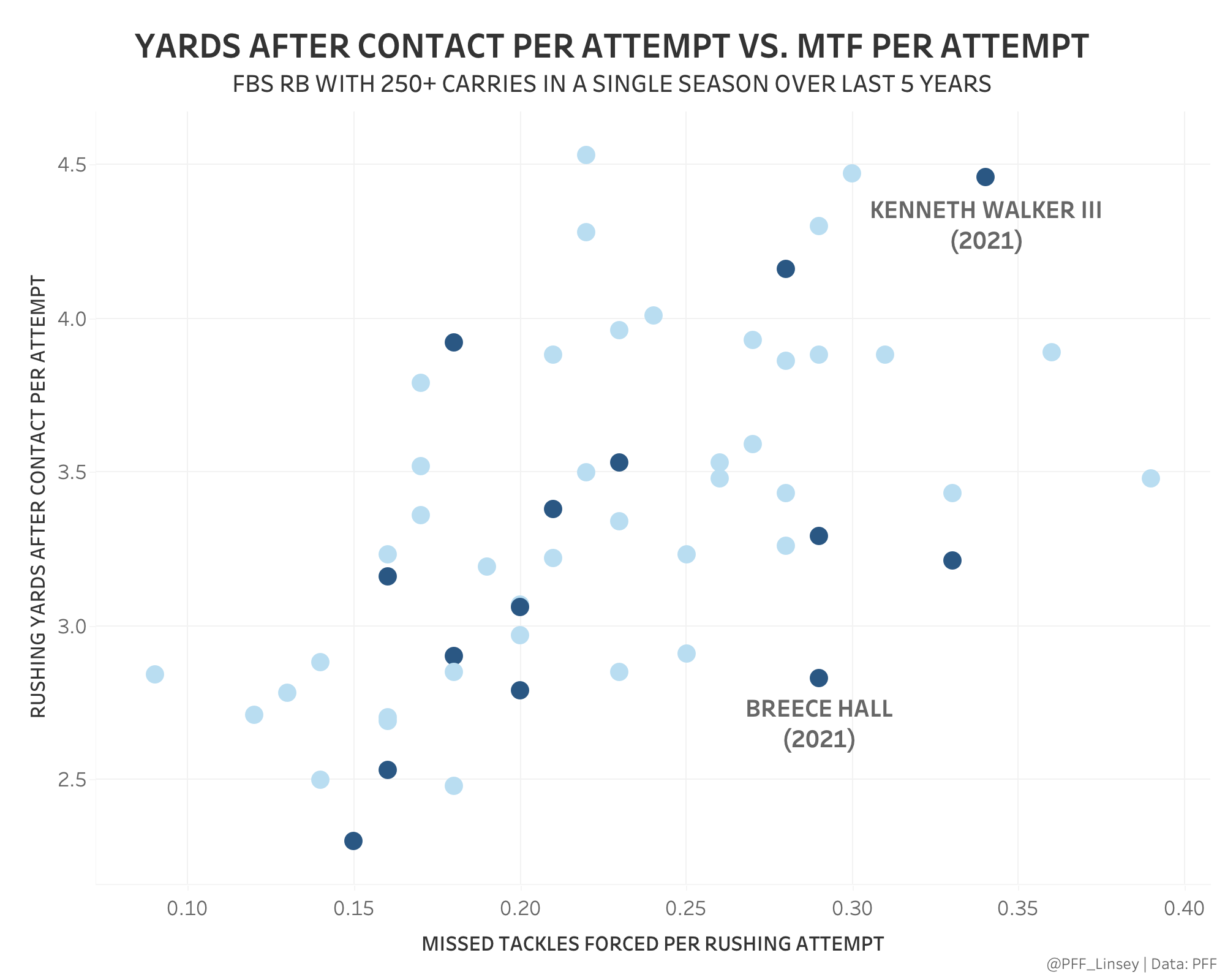 Walker’s 89 missed tackles forced on the ground were more than any other FBS running back last season, as were his 1,168 rushing yards after contact. Speed, power, shiftiness, vision — it’s all there.

The biggest hole in his game is his lack of production as a receiver out of the backfield, but I’m comfortably chalking that up to a lack of opportunity in Michigan State’s offense rather than an inability to produce. NFL Network’s Daniel Jeremiah spoke to that concern on his podcast Move the Sticks in late March.

“Since I did my last list, Mel Tucker got me a bunch of practice video. I was able to see him catching the ball, so I could answer that question,” Jeremiah said. “Just didn’t have as many opportunities to catch it at Michigan State. Ran extremely well. He’s just a really good football player.”

Seconded on the last point.

It’s hard to poke holes in Johnson’s game. As the PFF Draft Guide puts it, he has a “lab-built guard frame” at 6-foot-3 and 314 pounds with 34-inch arms. His explosiveness, strength and agility were on display at the combine, with 90-plus percentile finishes among guards in the bench press, vertical jump, broad jump, shuttle and three-cone drills.

As for on-field performance, Johnson improved his PFF grade in three straight seasons at Boston College, culminating in an 84.4 overall grade in 2021. He was also one of the more impressive performers at the Senior Bowl. There isn’t a box in the pre-draft process Johnson hasn’t checked.

Guard may not be the most exciting or valuable position for a team to address early in the draft, but a plug-and-play starter with upside like Johnson is well worth a first-round selection.

Not many nose tackles can provide legitimate value as pass-rushers. It’s part of what makes the Kenny Clarks and Vita Veas of the world so valuable. Jones has the potential to not only solidify a team’s run game but also generate pressure when lined up over center.

Travis Jones has C-4 in his hands pic.twitter.com/AuHhnA3AFM

Across three seasons at UConn, Jones earned PFF run-defense and pass-rushing grades above 83.0. He’s not simply someone who is going to hold the point of attack and eat double teams, though he can do that; Jones is an impressive athlete for his size with the potential to be a difference-maker on the interior. It would be a mistake for teams to let him fall out of the first round.

The edge defender position is the highlight of this year’s draft class. It might not have the “can’t-miss,” All-Pro talent at the top like Myles Garrett or Nick Bosa, but both high-end talent and depth are there to be had. The sheer number of names in the first-round mix makes it easier to overlook someone like Ebiketie.

There are three general boxes you’re looking to check for an edge defender prospect: size, athleticism and production. Ebiketie ticked the final box with 88.0-plus PFF pass-rushing grades in each of his final two seasons and a 2021 pass-rush win rate that held up well against other top names in the class.

Ebiketie also emphatically checked the athleticism box with 80th-plus percentile finishes in every drill, save the bench press. The 6-foot-3, 250-pounder comes in slightly below average for the position, but his 34-inch arms (81st percentile) help.

All of those traits together make him a prospect who teams should have interest in at the back end of the first round.

Teams bet on athletic traits early at linebacker, often at the expense of the important instincts at the position. Muma has some of the best “feel” in the class, both when navigating traffic to come downhill and make plays against the run and when dropping in coverage. He doesn’t sacrifice much athleticism, either. 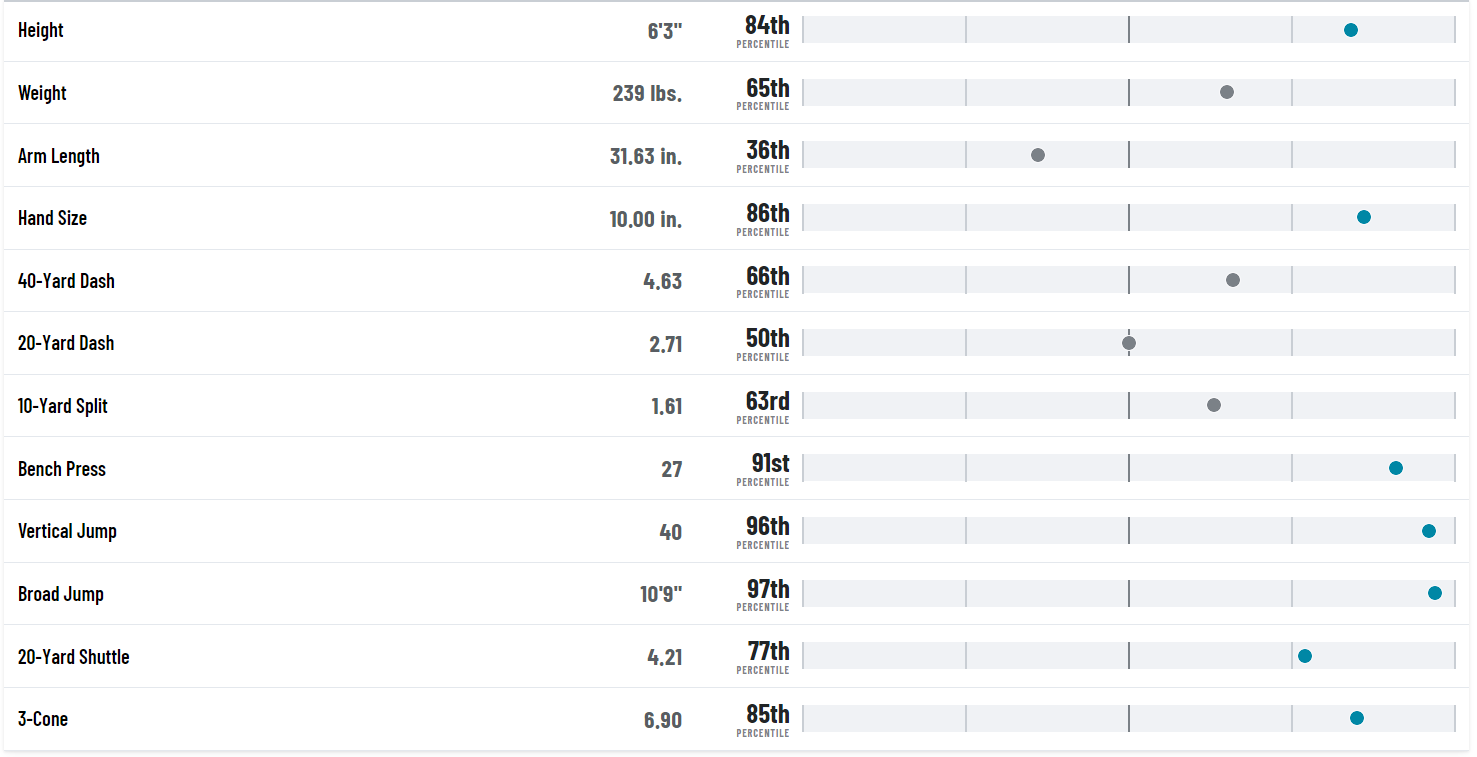 Add in back-to-back seasons with a PFF tackling grade above 85.0, and Muma is one of the more well-rounded linebacker prospects in this class. He’ll be well worth the selection wherever he ends up coming off the board on Day 2.

Jones would be an outlier if he went on to have a successful cornerback career at 5-foot-8 with 29-inch arms. However, he plays bigger than his size, and there’s reason to believe he can be a successful starter in the slot given his college production.

Jones is coming off two consecutive seasons with PFF run-defense and coverage grades above 80.0, and he tallied 17 combined interceptions and pass breakups last season for the Cougars.

Jones was able to consistently make impressive plays on the ball, including the interception above against Memphis, despite his size putting him at a disadvantage at the catch point.

The talk about his play at cornerback is burying the lede. Jones was the highest-graded returner in college football last season and should immediately step into a primary kick/punt returner role wherever he ends up.

Wright has pretty much everything an NFL team would want in a developmental edge prospect who will likely come off the board somewhere in the third to fourth round range.

The size and length are there for Wright to be an every-down player at 6-foot-5 and 274 pounds with 34-inch arms. His production across the past three seasons at UAB was also impressive, albeit against less-than-stellar competition. Wright’s 19.9% pressure rate in 2021 ranked first among FBS edge rushers in this year’s draft class.

Wright isn’t going to immediately step in as a high-end starter, but there’s a lot there for a team to work with as a rotational guy who could develop into an impact starter.