PFF Spread Picks for the opening week of bowl season

The back door was open for both teams in Philly, with Army (-7) coming back to take a 10-point lead late in the fourth quarter only to see Navy kick a field goal to give us a push and take us to 9-9-1 on our weekly “Pick of the Week” for college football. If you got it at -6.5, awesome (if 7.5, sorry). We’re on to the first weekend of bowls, and while the names might not be marquee, the value is there. We give our opinions on some of this value below. 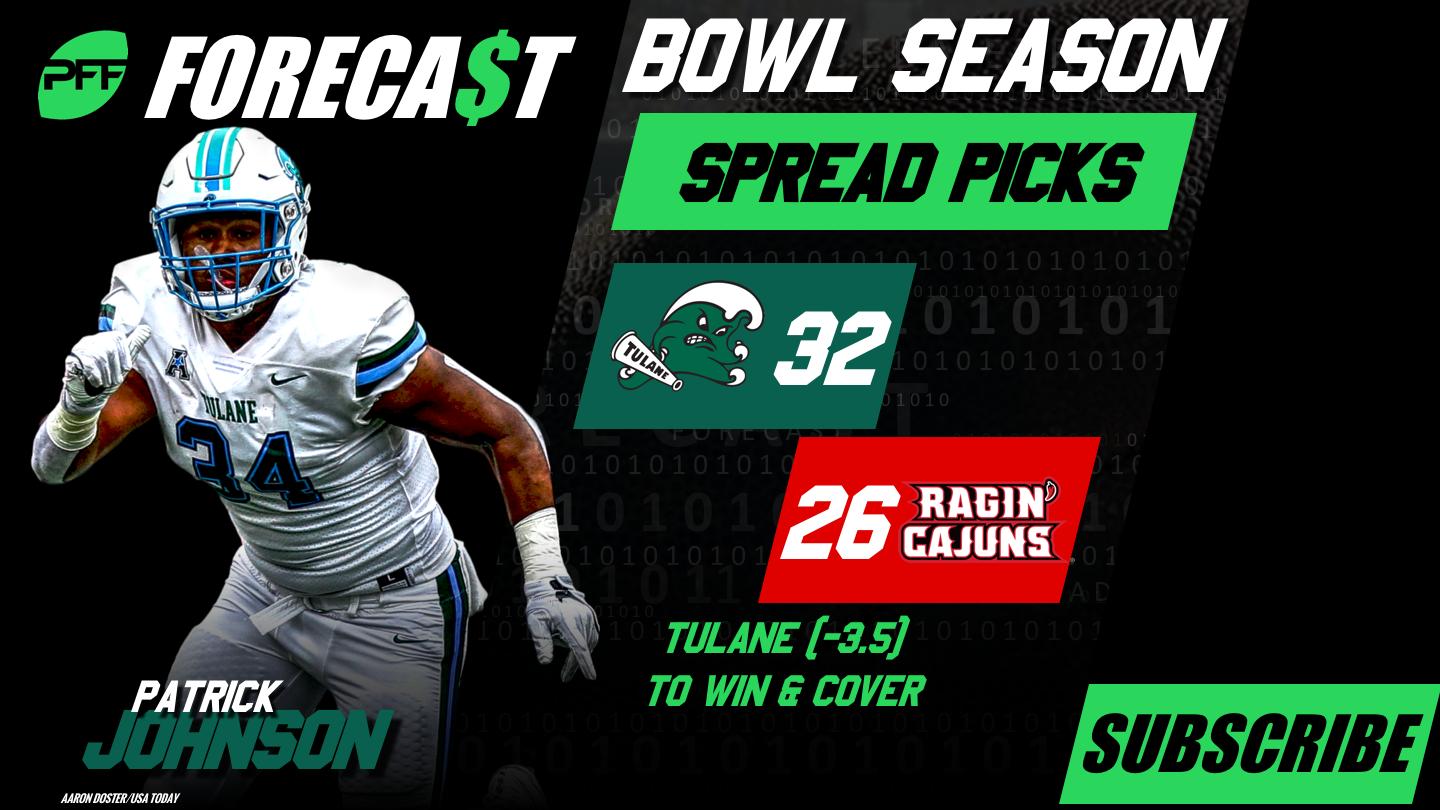 Point (Eric Eager): It’s rare that you see two teams that are separated by over 200 (average is 1505) PFF ELO points squaring off in a bowl game, but you have it here with Tulane versus ULL. Louisiana gives up positive EPA in both early-down passing and rushing, strangely surrendering a higher success rate on said runs than passes. Tulane should be able to exploit that weakness with the combination of Darius Bradwell (5.8 yards per carry) and Corey Dauphine (6.4). Justin McMillan, who has struggled as a passer, should also be able to chip in some on the ground as well, as he’s averaged 4.5 yards per carry on the ground after taking over for Jonathan Banks. Tulane’s defense was nothing to write home about in the AAC, but have played a far tougher schedule than the Ragin’ Cajuns (73rd versus 110th), so I’m not particularly worried about how the solid quarterbacking duo ULL will do against a team that’s had to match up with (and beat in some cases) the likes of Memphis, Wake Forest and Cincinnati this season.

Counterpoint (Ben Brown):  The Ragin’ Cajuns open up bowl season on Saturday in the AutoNation Cure Bowl. Quarterback Andre Nunez should see the majority of snaps but is coming off of his worst performance of 2018 in their Sun Belt conference championship game against Appalachian State. Most of his struggles in that game occurred under pressure where he has been atrocious all season, posting a passer rating of 54.1. Tulane is middling at applying pressure and has only done so a quarter of the time when not sending an extra pass-rusher. If blitzed,, Nunez can target Elijah Mitchell who has had success over a very limited sample of producing yards after the catch out of the backfield. If successful at keeping pressure at bay and getting Mitchell in space, Louisiana could easily force this game to come down to the end where a cover by Tulane could get erased on the final possession of the game. 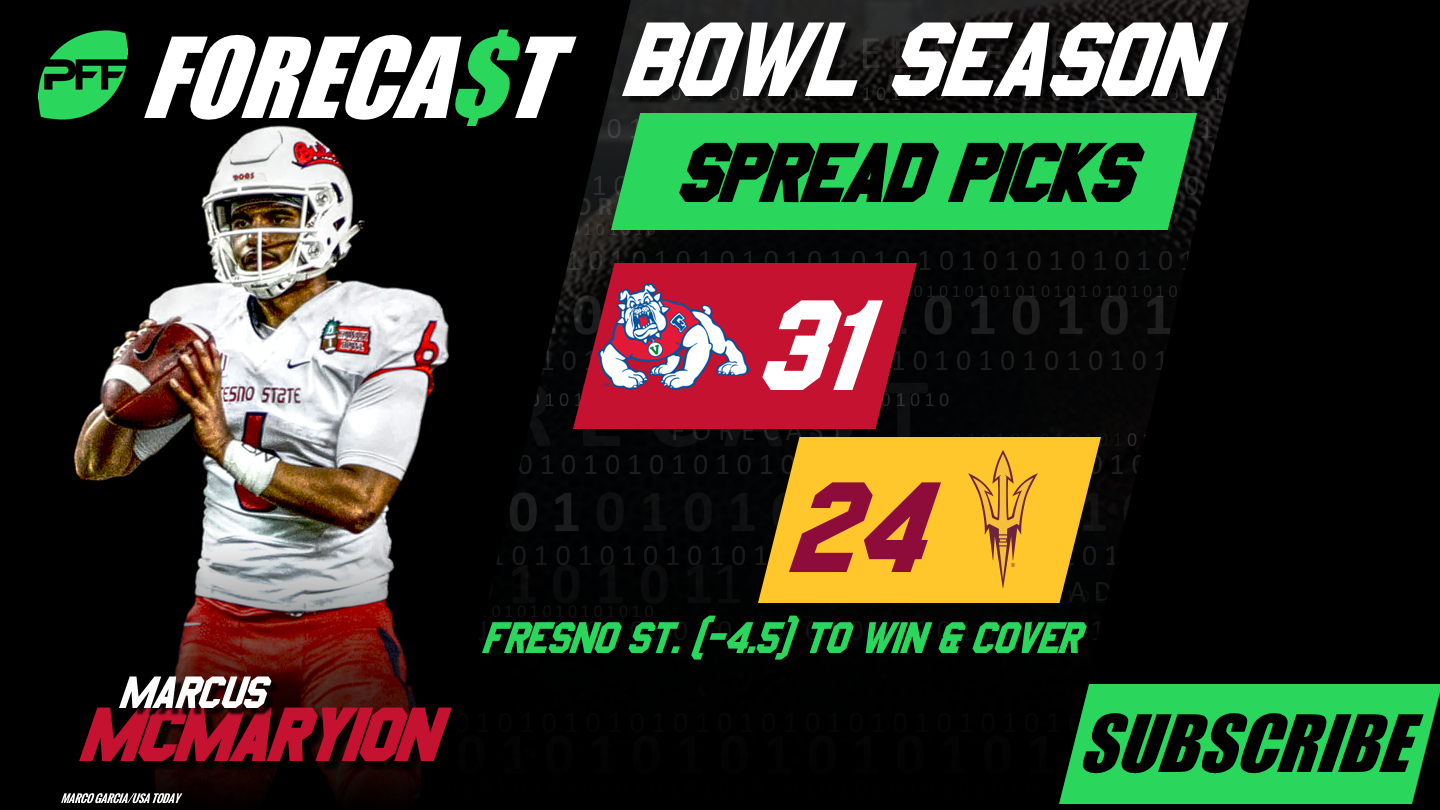 Point (Ben Brown): There is little doubt that the loss of N’Keal Harry is significant for the Arizona State offense. He is one of the few receivers in the NCAA that consistently elevated quarterback play. Among receivers with at least 75 targets, Harry had the fifth-highest percent of contested targets and over 50% of these targets were completions. Manny Wilkins posted a passer rating of 118.9 when targeting Harry and 98.8 when targeting all other wide receivers. Fresno State comes in with the best defense in the Mountain West conference allowing an EPA on early-down passes and rushes of 38.6% / 36.6%, respectively. Fresno State should be able to stifle Eno Benjamin in the running game and turn the Arizona State offense into a passing attack out of whack due to missing their most critical piece. With the ability of Marcus McMaryion and KeeSean Johnson in the passing game, Fresno State should jump out to an early lead and ride their defense to an impressive victory in Las Vegas.

Counterpoint (Eric Eager): Harry is out for Arizona State, which makes this handicap a bit tougher. However, Wilkins is a quarterback that has seen quite a bit in his time as the Sun Devil’s signal-caller, and he finished on a high mark in 2018 — generating a clean-pocket passer rating of 113.5. They were second in the Pac 12 in early-down passing EPA, and should be able to stay ahead of the sticks enough to be effective offensively. Benjamin was also solid on the ground, with 942 yards after contact and over 1,500 rushing yards total this season. While Fresno State was terrific defensively this season (best in the Mountain West in early-down passing efficiency allowed), a step up in competition from the Mountain West to the Pac 12 could be too difficult for them in their quest to win and (in our case) win by more than a touchdown.