We're five weeks into the year and the Heisman Trophy race is taking shape. Three signal-callers are certainly the front-runners for the trophy but there's a lot of football to be played. With some big games on the slate, it's still early but the top players for this year's most outstanding player award are really shining on Saturdays.

Without further ado, the second PFF rankings for the 2018 Heisman Memorial Trophy.

As it stands right now, this race is Tagovailoa's to lose. As is the case with the National Championship. Tagovailoa has put together one of the more impressive displays of a first-year starting quarterback in recent memory and is currently our No. 2 ranked quarterback in overall grade. He still holds the nation's best TD:INT ratio, throwing 14 touchdowns compared to no interceptions as he's been incredibly safe with the ball despite averaging 13.2 yards per pass attempt.

Grier is right on pace with previous Heisman QBs in terms of overall grade, a trend that can only be seen as a positive for the Mountaineers' signal-caller. Predicated largely on production at the individual level, PFF grades have essentially come incredibly close at predicting the last few Heisman Trophy-winning quarterbacks. Five weeks into the 2017 season, Baker Mayfield was the top-graded quarterback. Through five weeks of the 2014 season, Marcus Mariota was the highest-graded quarterback. Five weeks through this season, Grier tops the charts at quarterback with his 93.5 overall grade. Those previous two each won the Heisman Trophy.

(Lamar Jackson ranked sixth five weeks into the 2016 season but added a different dynamic with his legs and running ability.)

A minor blip on the radar is all Murray's late-to-practice-on-Friday-so-he-didn't-start-Saturday will seem in the long run. He torched the Baylor secondary this past weekend once he did get in, to the tune of six passing touchdowns and a rushing score. He now holds the nation's highest yards per pass attempt average at 13.4 yards and has thrown for 17 total touchdowns and accounted for 44 additional first downs.

Getting back into not only the win column but into the thick of the Heisman race, Herbert had himself a day against Cal on Saturday. He completed 16-of-22 passes and tallied a combined 11 first downs and touchdowns. He didn't need to do much as Oregon stymied the Cal offense and the running game averaged 6.8 yards per carry but Herbert's leadership of this Ducks team cannot be understated.

Dillon may have finished with an even bigger body of work had he not exited the Temple game with an apparent ankle injury in the opening moments of the second half. Still, Dillon tallied 28 carries for 157 yards and two touchdowns in just 31:22 minutes of action against the Owls. He's forced 23 missed tackles this season and has accumulated a whopping 358 yards after contact with defenders. If he can go this week, you can bet he'll keep adding on to those numbers. 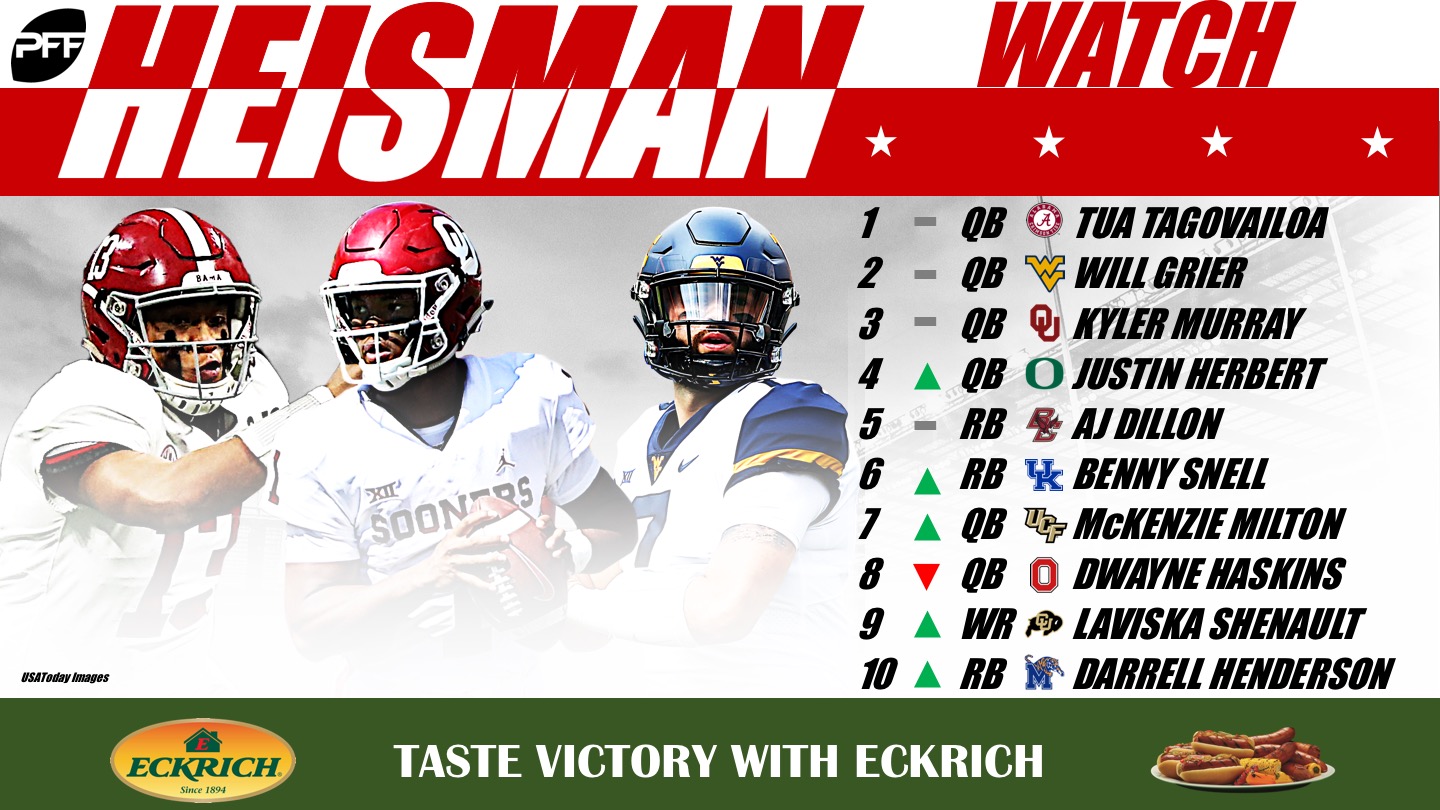 The Wildcats keep winning and Snell keeps clawing his way up the Heisman leaderboard after being named one of our early favorites. He didn't eclipse the 100-yard mark against South Carolina but seven of his carries did result in either a touchdown or a first down. He forced five missed tackles and gained 71 of his 99 yards after contact, something we've become accustomed to seeing this season. Through five games. Snell averages 3.82 yards after contact per attempt.

A lackluster game against South Carolina State and a canceled contest against North Carolina really put Milton's legitimate Heisman candidacy at a standstill heading into Week 5. However, in a prime example of what he can do against Power-5 opposition, Milton accounted for four passing touchdowns and another two on the ground. Albeit lacking in the typical Milton accuracy we've grown accustomed to, a six-touchdown performance against an ACC opponent is what he needed to rebound into the Heisman conversation.

Sure, Ohio State got the win against Penn State on Saturday night but this one was not pretty. Haskins' so-called Kryptonite was shown as he struggled to find much rhythm with pressure in his face, limping to a 39.8 overall grade on pressured dropbacks. He didn't quite have the game you'd expect from a Heisman candidate, completing 22-of-39 passes for 270 yards (235 of which were generated by his receivers after the catch), but Haskins' body of work to date keeps him in the top 10.

Shenault has been a mismatch weapon for the Buffaloes offense since the opening stages of the season and the nation is rightfully catching up to the excitement he generates. Currently holding the nation's highest receiving and overall grades at the position, Shenault has turned 39 receptions into 589 yards, four touchdowns and has forced 13 missed tackles after the catch. Perhaps the most incredible feature of his body of work so far this season is the fact that he has hauled in 90.7% of his targets (39-of-43), a figure that tops all FBS receivers with at least 20 targets.

Henderson got mauled by Tulane on national television this past weekend, keeping the nation's highest-graded running back off the stat sheet by virtue of the Green Wave running away with the game. Still, Henderson showed his Heisman Trophy-caliber moves with his 47-yard touchdown run before the game was out of hand. Despite just seven carries in this game, Henderson still leads the nation with 760 rushing yards. Adding to his list of accomplishments this year, every FBS running back with at least 500 yards has carried the ball 73 or more times. Henderson leads the nation in yards but on only 65 attempts. His 11.7 yards per carry are far and away the tops in the country.