The 2018 season in the Big Ten will go as the story of Urban Meyer unfolds before our eyes. While we won't even get into that here today, we will at least point out that the Big Ten is seemingly open this year, after years of J.T. Barrett-led Ohio State teams were hands down the favorites almost every season No. 16 was behind center.

With Barrett gone and Dwayne Haskins now in at the Shoe, the conference is up for grabs. Haskins may be the answer in Columbus, but with a small sample size from Haskins last year, what to expect from him is still in the air. There are many talented position groups, sides of the ball and specific players returning across the Big Ten landscape, however, one interesting trend is developing.

That is a positional legacy, developed after several players have shown success a season ago, after their predecessors at their positions have now gone on to success of their own, in the NFL.

Iowa tight end Noah Fant returns to Iowa City after an impressive campaign in 2017 in which he registered 495 receiving yards on 56 targets, ranking 13th among returning FBS tight ends in yards per route run at 1.81. His skillset and stature on the field reminds fans a lot of former Iowa tight end George Kittle. Fant stands 6-foot-5, 232 pounds while Kittle is listed at 6-foot-4, 249 pounds. In Kittle's final year at Iowa, he racked up an incredible 3.12 yards per route run, topping the nation's tight ends before being drafted by the San Francisco 49ers.

If Kittle's legacy at Iowa isn't enough, he has produced in the NFL as well, checking in on our list of top 10 NFL tight ends for the 2018 season. You can bank on it if Fant has another strong season, he'll receive more than just first-round hype. He'll likely be a first-round pick.

We can't go any further without mentioning this past NFL offseason's media darling, Kirk Cousins, who signed a lucrative deal to join the Minnesota Vikings earlier this spring, and the reigning Super Bowl MVP Nick Foles – both of whom played quarterback at Michigan State.

While I am in no way comparing current Michigan State QB Brian Lewerke to Cousins or Foles, the NFL bloodline at the position is clearly there. Lewerke heads to East Lansing this fall on the heels of an up-and-down campaign marred with lows and spotted with highs. He saved his best game for last as he lit up the Washington State secondary in the 2017 Holiday Bowl, completing 13-of-21 passes for 213 yards and three touchdowns. He threw away two of those incompletions and was hit as he threw on another, giving him an adjusted completion percentage of 77.8 percent, which was good enough for 11th-best mark during the bowl season from any one quarterback.

In total, Lewerke finished near the middle of the pack among returning quarterbacks in the conference, but his promise in certain aspects proven stable from year-to-year hint towards continued success in 2018. He finished with the second-highest passer rating in the conference on standard, non-play-action passes, sitting just behind Trace McSorley with a 91.0 overall mark. 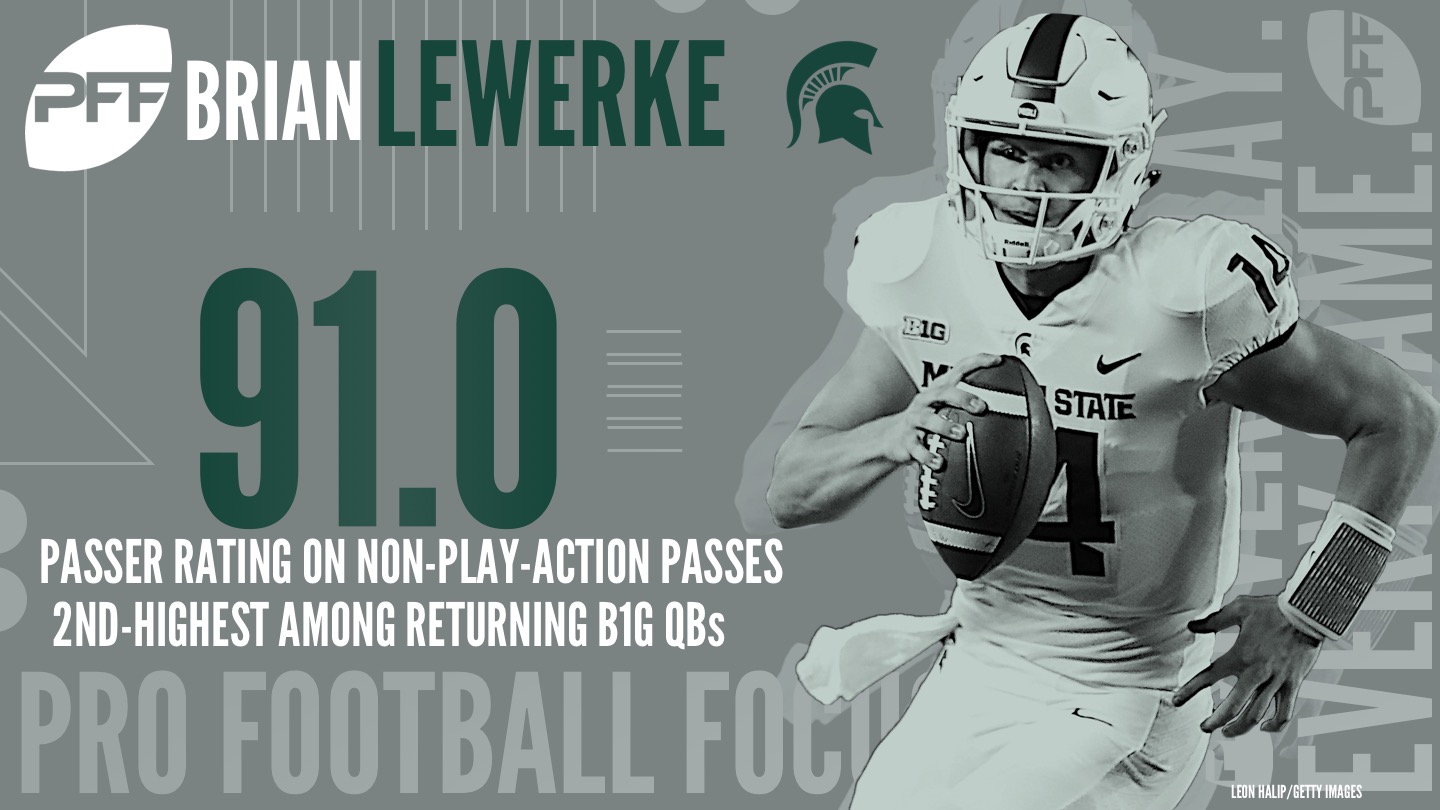 To raise his NFL potential, Lewerke will have to improve on limiting the mistakes and his overall accuracy. He enters camp with the nation's 66th-highest adjusted completion percentage, among 104 qualifying, returning quarterbacks.

The long line of defensive backs in the NFL from the University of Michigan is well documented. From Charles Woodson to even as recent as Jourdan Lewis and Jabrill Peppers, currently of the Dallas Cowboys and Cleveland Browns, respectively, the Wolverines talent in the defensive secondary has been something special, even during their 8-5 season a year ago. Returning this fall for Michigan is arguably one of the more talented cornerback duos across the country in David Long and Lavert Hill.

Long set the PFF College record for lowest passer rating on throws into his coverage last year, sporting a ridiculous 11.9 mark on 29 targets. He allowed nine receptions for just 88 yards and came away with two interceptions. Quarterbacks targeting the left side of the field didn't fare much better as Hill allowed just a 38.4 passer rating into his coverage on 31 targets. He also came away with two interceptions and limited receivers to just 66 yards after the catch. 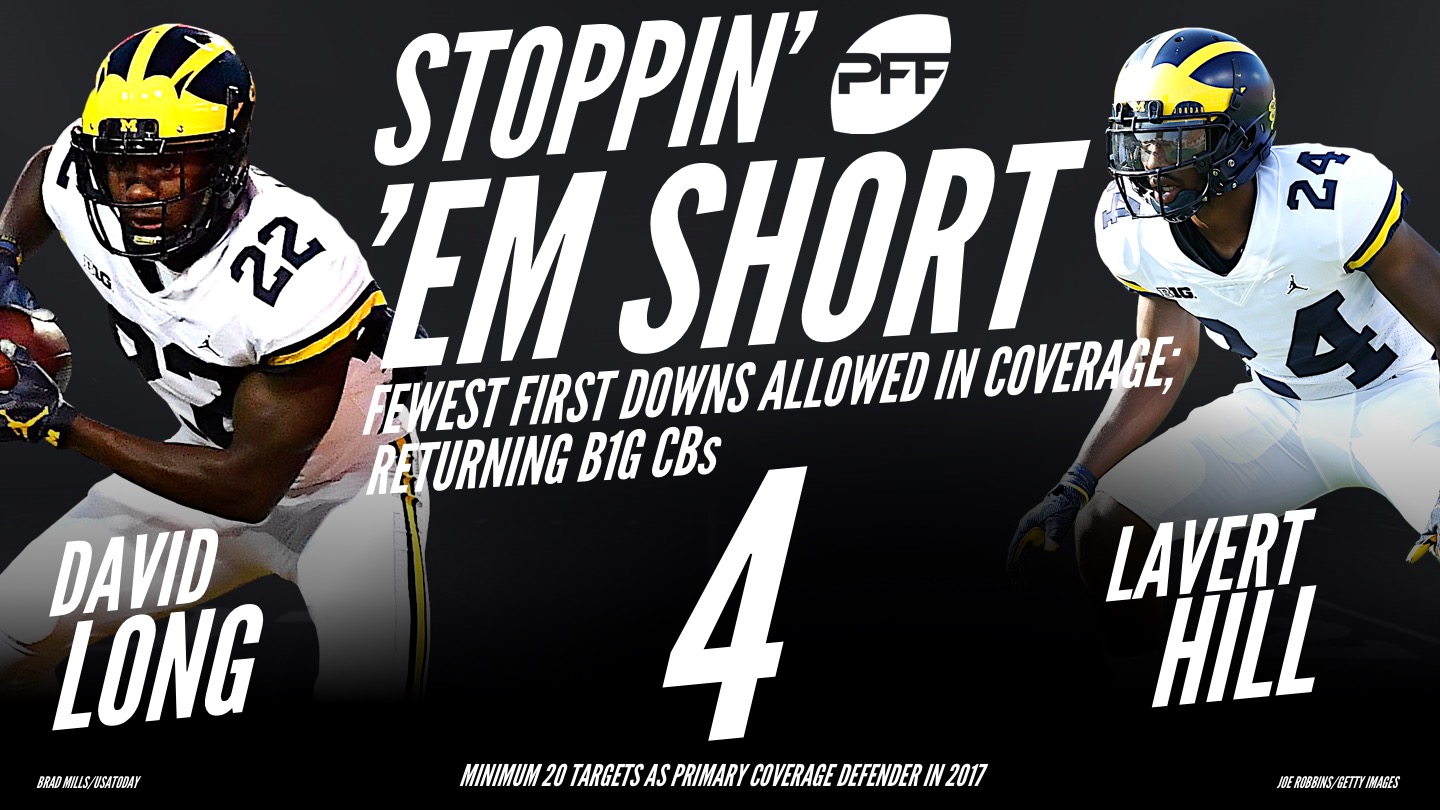 Together, they combined to allow just eight first downs into their coverage (four apiece), which tied them for the national lead among returning cornerbacks.

This one is arguably the easiest comparison to make, as Nick Bosa's older brother Joey, is wreaking havoc on Sundays for the Los Angeles Chargers. The younger Bosa is no slouch either, finishing last year with the second-highest grade among edge defenders and racking up the second-most pressures among returning players at the position.

Bosa's 16.2 pass-rush productivity from a season ago tops all returning Big Ten edge defenders as he got home on a pressure once every 4.8 pass-rush snaps, recording 66 pressures in the process. He was an equal opportunity pass-rusher, recording 26 pressures from the left side of the defensive line and another 40 from the right side, including seven of his nine sacks from the right.

The OSU to NFL edge rusher pedigree is longstanding especially lined with Bosa's immediate success in the league, and all Nick Bosa has to do is put forth another effort like he did in 2017 to hear his name among the first few names mentioned next April.

The Wisconsin offensive line factory has churned out three more names likely to be heard next April in the NFL draft as David Edwards, Michael Deiter and Beau Benzschawel return to anchor the O-line in Madison. Edwards and Deiter were book-end tackles protecting QB Alex Hornibrook a season ago while Benzschawel has spent 1,890 snaps at right guard the past two seasons after splitting time between right tackle (459 snaps) and right guard (157) in 2015. 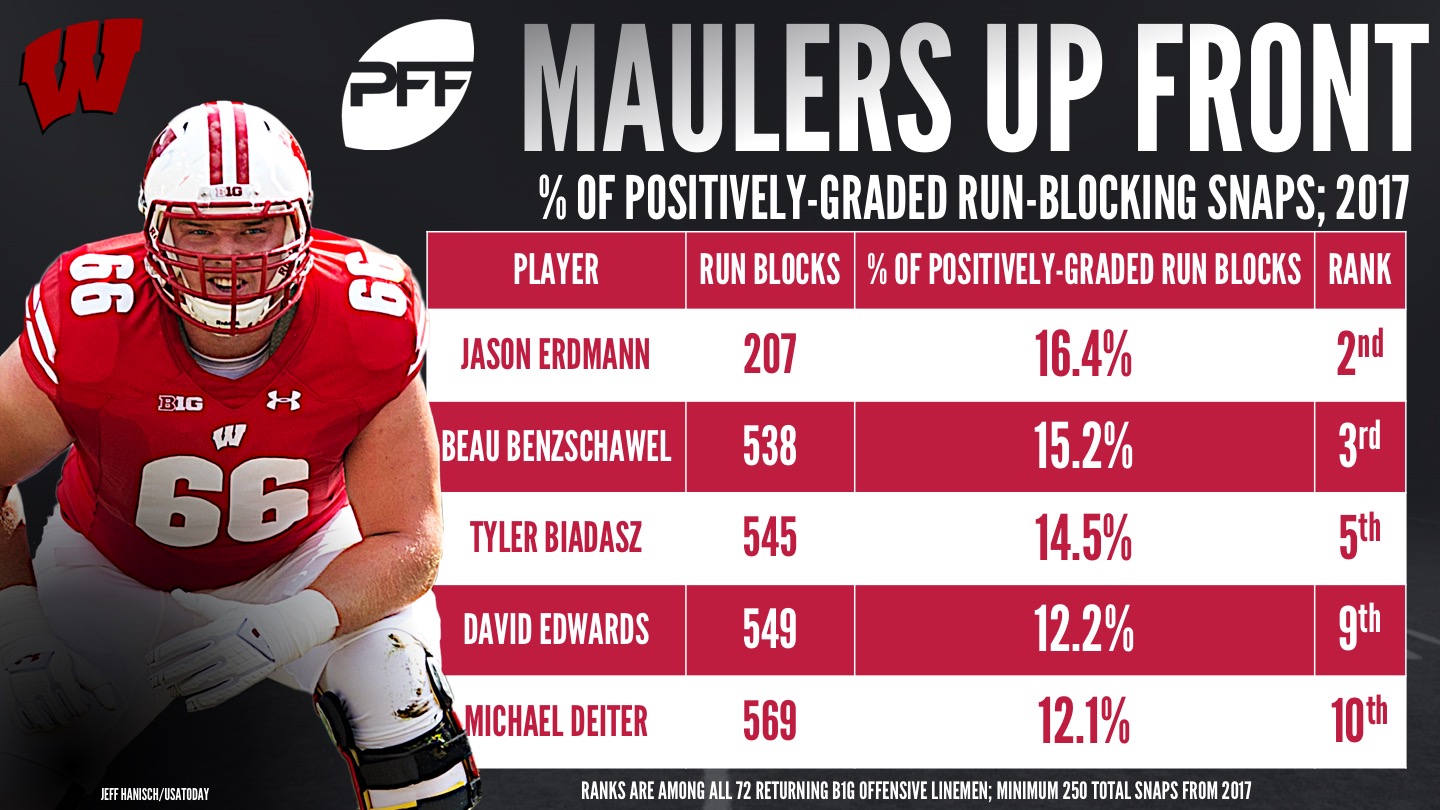 Throw in fellow guard Jason Erdmann and Tyler Biadasz, who recorded a positive grade on 16.4 and 14.5 percent of their run blocks, respectively, and this Wisconsin offensive line may not be just the best in the conference, but in the entire nation when it comes to run-blocking.

You can sure bet you'll hear some of those names next April.