The Pac-12 conference is dominated with new faces this season after losing two of it's top signal-callers early in the 2018 NFL Draft and welcoming (back) two high-profile head coaches to the college ranks.

Aside from the new faces, some very intriguing, budding storylines have developed since January while the returning quarterbacks are taking center stage with Heisman hopeful seasons that kick off in less than a month.

All of this in mind, we aim to answer some of those burning questions that are linked to the Pac-12 as we ready for the 2018 NCAA season.

Can Khalil Tate lead Arizona to a Pac-12 South title, and a Heisman Trophy?

Tate started just seven games a season ago for the Wildcats and is seemingly still learning the quarterback position at the college level. Installing a new scheme in Tuscon also hasn't helped as he has reportedly has not been in the same page with the coaching staff. Regardless of all of this, Tate enters the 2018 season on numerous award watch lists and is in the preseason discussion for the Heisman Trophy (which of course means absolutely nothing). Tate made spectacular plays with his feet a season ago, but not to be forgotten, also made more than enough plays with his arm and was not afraid to test defenses downfield.

In 2017, he led the nation's non-triple-option quarterbacks in deep pass percentage, targeting a pass 20 or more yards past the line of scrimmage on a whopping 30.9 percent of his attempts. All told, he fielded a below-average accuracy percentage on those attempts and a below-average passer rating, so improvement in his ball placement on his deep shots can only help his Heisman candidacy as big plays will surely follow. Where he really shined his brightest, was when he was kept clean from pressure in the pocket. He completed 85-of-123 passes from a clean pocket, for 1,109 yards, nine touchdowns against three interceptions and the conference's third-highest passer rating among returning quarterbacks (111.5). 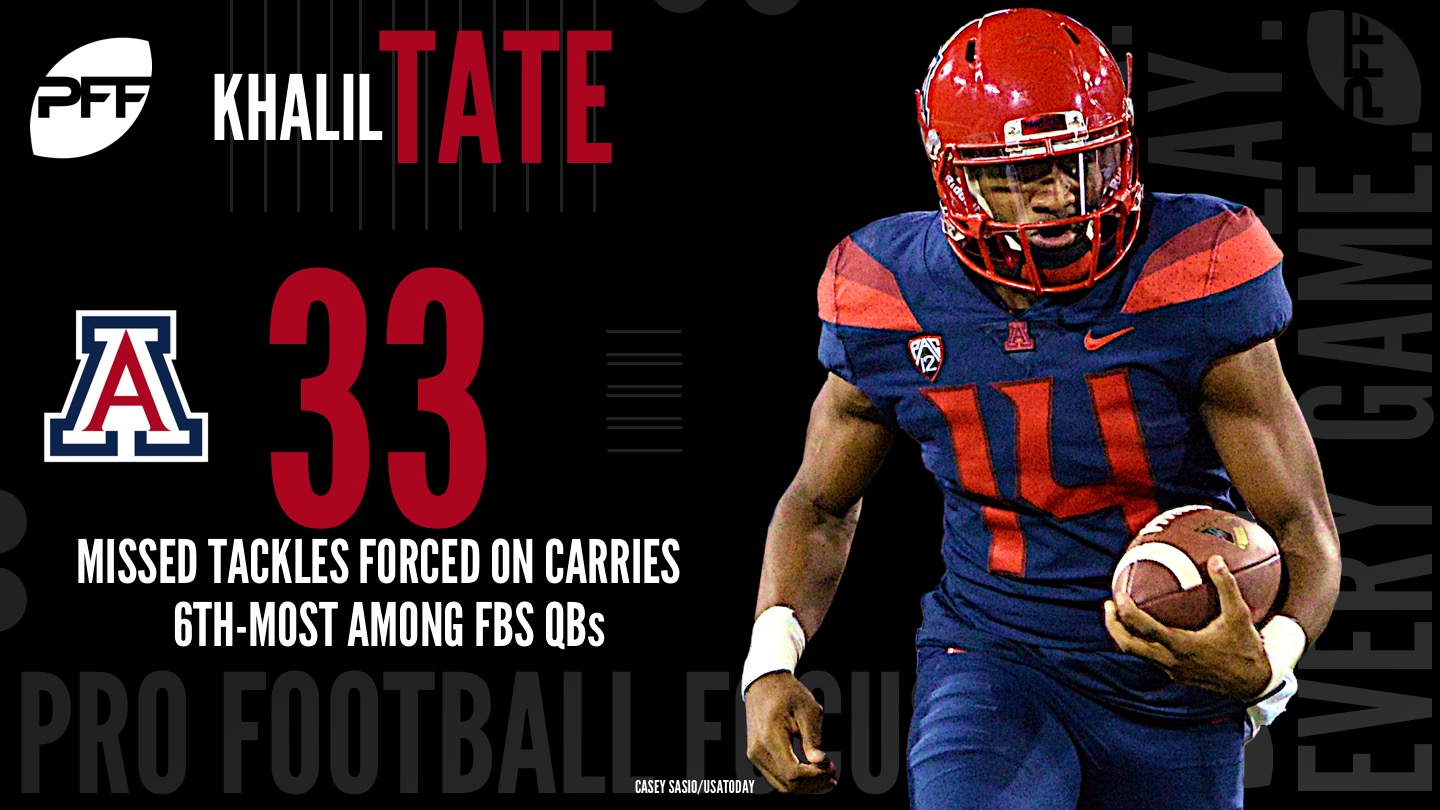 I'd be remiss to not explain his rushing prowess, as he accumulated 1,474 rushing yards on 144 attempts. 637 of those yards came after contact and he forced 33 missed tackles as a rusher. Those figures rank fourth and fifth, respectively, among the Pac-12's returning running backs from a season ago.

With another strong season on the ground in the form of his ankle-breaking long runs, continued  strong play from a clean pocket and perhaps some other throwing improvements (he did attend the Manning Passing Academy this summer), Tate would no longer be a dark horse for the Heisman Trophy, but rather, could be considered a frontrunner. A Pac-12 South title would be certainly be in the realm of possibilities if that were the case.

Herm Edwards & Chip Kelly – what do they have to work with at ASU, UCLA?

New head coaches in the Pac-12 – Chip Kelly and Herm Edwards – have their work cut out for them in 2018. Kelly inherits a UCLA team void of a quarterback as Josh Rosen is now a member of the Arizona Cardinals while Edwards returns Manny Wilkins to the Phoenix. Edwards also returns a varietal who's who of stars who have either broken out, or are on the verge of breaking out on his roster, including Koron Crump, N'Keal Harry, Rennell Wren, Eno Benjamin, just to name a few. Crump was granted an extra year of eligibility after recording four sacks in his first three games before an ACL injury sidelined him for all of last season.

Harry is a talented track star of a wide receiver and he returns with the second-most yards (312) on deep receptions in the conference while leading the cast of returning receivers in the total yards (1,142) and receptions (82). 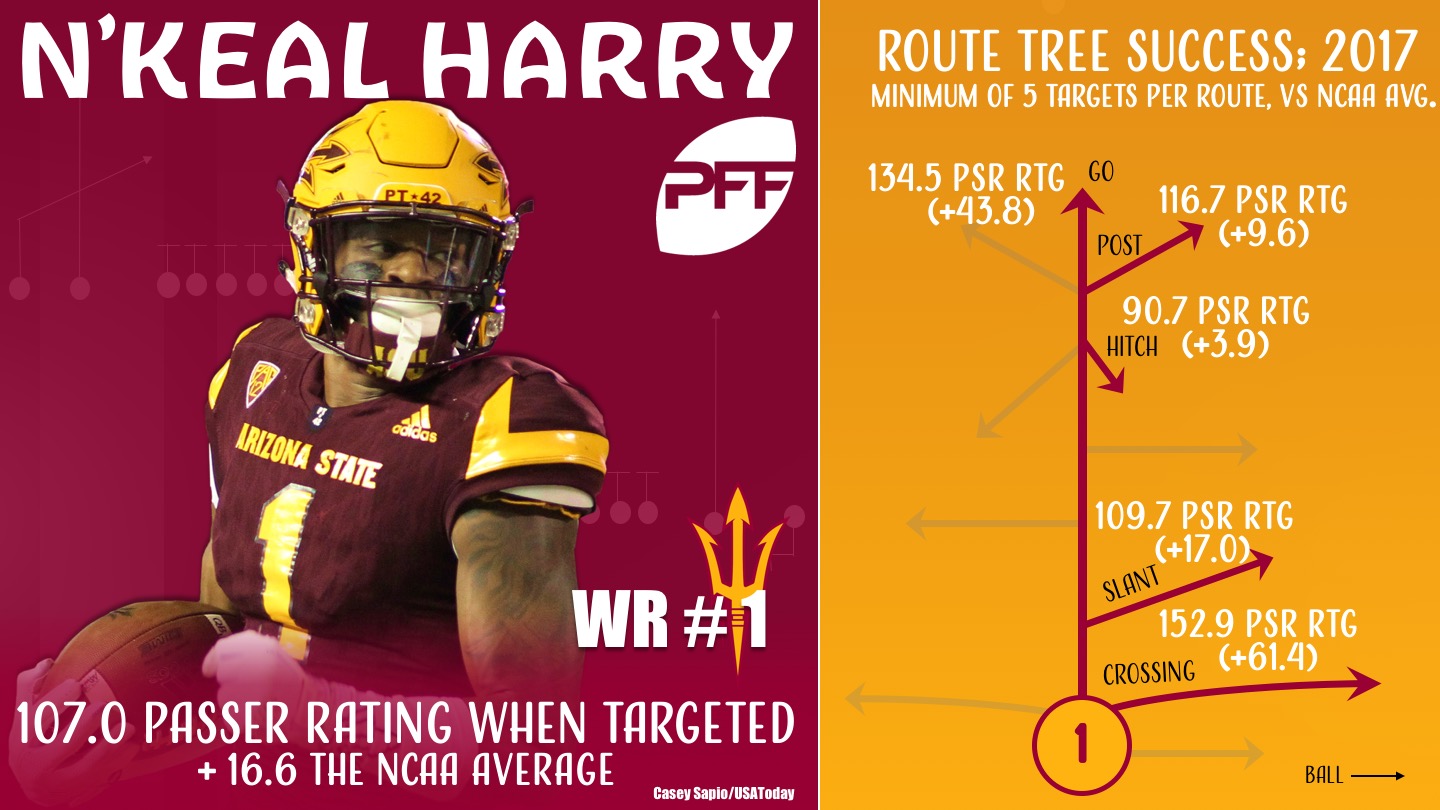 On the flip side, Kelly and the Bruins may be void at quarterback, but whoever takes over under center will have arguably the nation's best pass-catching tight end at his disposal in 2018. Caleb Wilson returns as the nation's highest graded tight end from last year, finishing the season at 93.1 overall. He averaged 2.44 yards per route run last season and was also no slouch in pass protection, giving up just one hurry on 35 pass-blocking snaps. The Bruins also return a very talented defensive secondary on the back end, so even with whoever wins the UCLA QB Battle Royale, it's safe to say Kelly will have enough talent elsewhere to compete early on in the year.

Other returning QBs across the Pac-12 landscape

Aside from the returning stars in the state of Arizona, the Pac-12 as a conference returns some big names, not only for hopes of winning their respective divisions or even a conference title, but for the 2019 NFL Draft. Justin Herbert of Oregon was named as a player to watch this season with eyes towards the draft, while Colorado QB Steven Montez will look to take the next step in his development and K.J. Costello hopes to be healthy enough to lead the Cardinal to a North title.

Montez started the season off on a tear, putting forth plus-grades in six of his first seven contests with the team finishing that stretch with a record of 4-3, despite losing two of those contests by four or less points (27-23 to UCLA, 45-42 to Arizona). The final five games however, Montez disappointed, and limped to only two games with a positive grade as the team fell to 1-4 over the home stretch of the season. In fact, during Weeks 1-7, Montez' 86.9 overall grade ranked 12th out of all FBS quarterbacks while his grade in Weeks 8-13 saw an overall grade of 64.5, or 95th among the same group. More of that stretch of play between Weeks 1-7 from Montez, and we're talking about a much better season in Boulder. 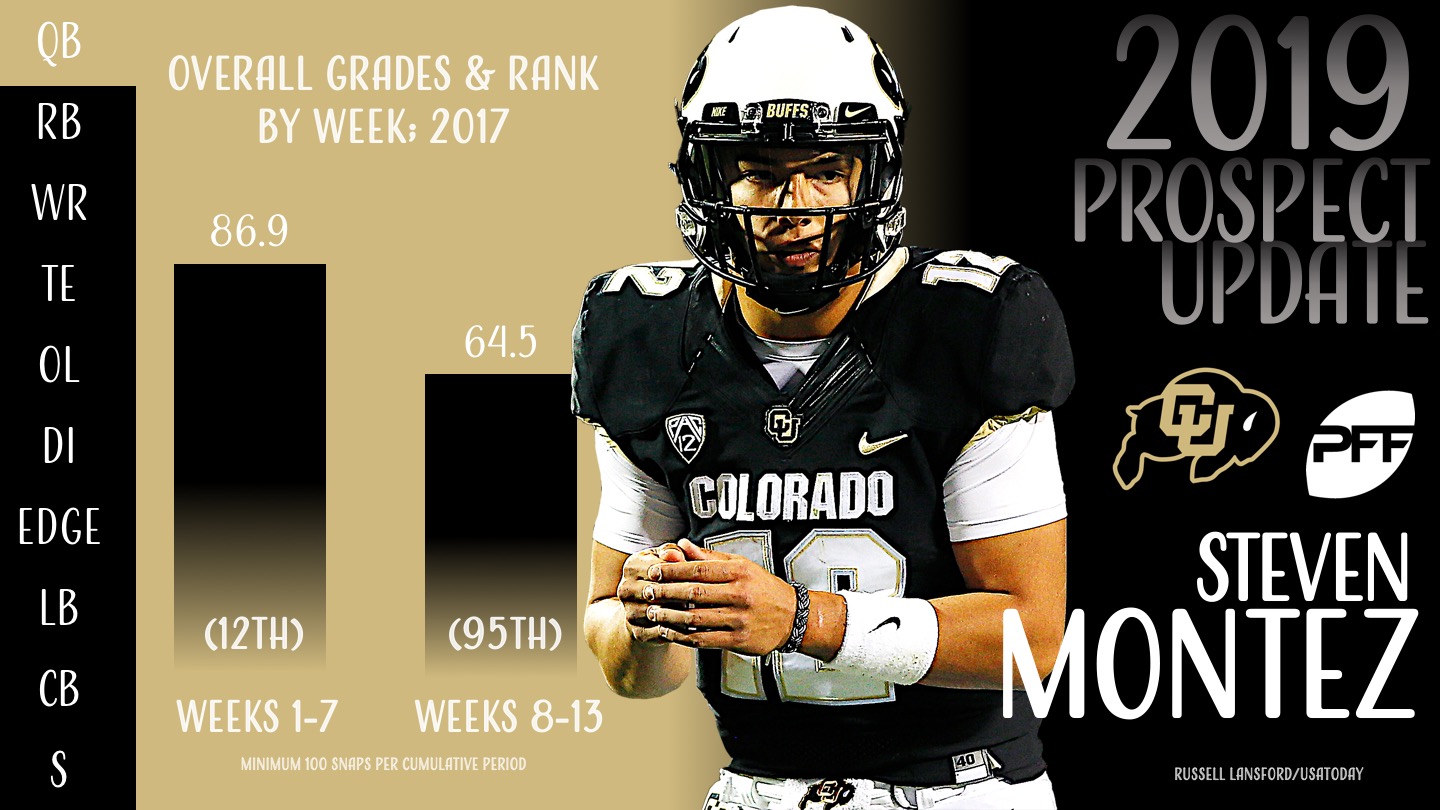 Costello returns to Stanford as the clear-cut starter as Ryan Burns has graduated and Keller Chryst has transferred to Tennessee. He finished last season with the conference's second-lowest adjusted completion percentage among returning quarterbacks (69.3 percent) while sharing time with Chryst, however, Costello did have his moments. He saw the conference's fourth-highest passer rating on deep passes (107.0) and also the fourth-highest passer rating on standard, non-play-action passes (94.9). Without pressure on him from Chryst or even Burns, an offseason of rehabbing his surgically-repaired hip and a great supporting cast including the reigning Heisman runner-up in Bryce Love in the backfield with him, Costello could be in for a breakout year and contention for a Pac-12 North division title.