After taking care of business against Middle Tennessee State 49-7, the back-to-No. 2 Georgia Bulldogs head to Missouri to start a string of seven consecutive SEC games. While the Bulldogs easily handled who was thought to be their primary contender in the SEC East when they beat South Carolina in Week 2, they are now set to face the SEC’s, and one of the nation’s, most experienced quarterbacks in Drew Lock (86.8).

Lock has logged over 2,500 snaps in his four-year reign as a starter and guided the Tigers to nine straight regular season wins since their loss to Georgia last October.

This feature on Georgia is brought to you by Eckrich, the Official Smoked Sausage of the Georgia Bulldogs.

We highlighted this after Week 1, but the list of offensive playmakers for the Bulldogs grows every week. Mecole Hardman’s (79.0) game-changing speed is being utilized in all facets of the game, including catching 12-of-13 targets for 148 yards and three touchdowns (for a perfect 158.3 passer rating when targeted) and a punt return touchdown this past week. Jeremiah Holloman’s (79.8) size and strength were used primarily as a run-blocker early, but his role in the offense is increasing as he’s now tied for the third-most targets on the team with six, catching five for 112 yards (158.3 passer rating). This group will only improve as senior Terry Godwin (58.4) gets backs to full health after missing the opener and only playing 26 snaps in the past two games. 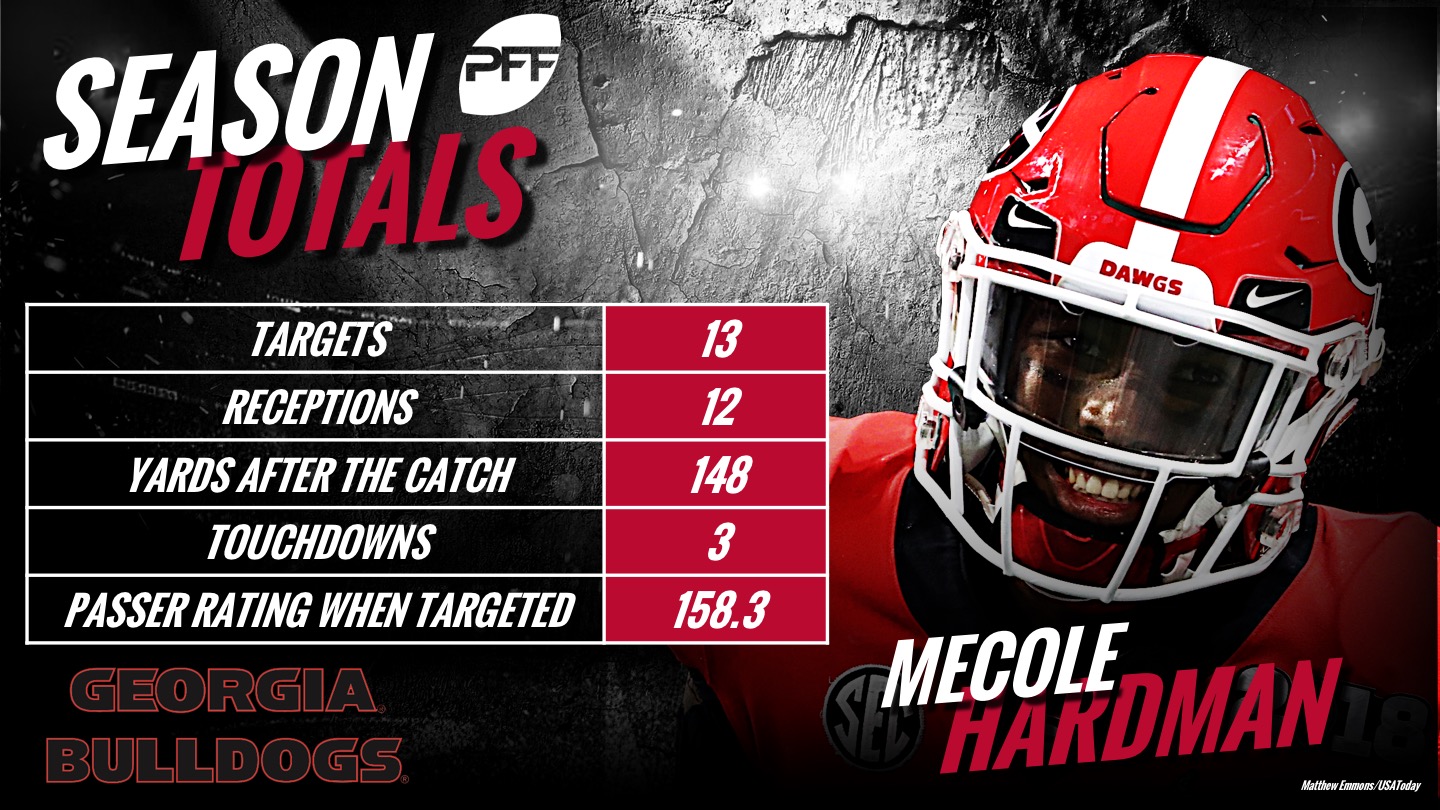 The plethora of playmakers on the outside can’t do anything without the ball in their hands – and Jake Fromm (72.0) has been putting it right where it needs to be. Among qualified quarterbacks, Fromm is No. 1 in the FBS in adjusted completion percentage (86.7 percent) and No. 4 in passer rating from a clean pocket (152.6). He’s been kept clean quite often, as well as Fromm has only been pressured on eight of 53 dropbacks (15.1 percent), the third-lowest percentage in the FBS.

In addition to the playmakers in the passing game, Elijah Holyfield, now the team’s leading rusher, has delivered that in the running game to compliment D’Andre Swift (68.3). Holyfield is currently ninth among qualified FBS running backs in yards after contact per attempt (6.41), with 141 of his 200 rushing yards coming after contact, including six runs of 10-plus yards.

While the Bulldogs have our second-highest graded defense behind Alabama, they have not gotten pressure on the quarterback at an elite level. In fact, they are statistically one of the worst pass-rushing defenses in the nation through three weeks. They only have 15 total quarterback pressures, one sack and a pass-rush win percentage of 5.4 percent, which is tied for 124th nationally. While those numbers are concerning, their opponents also helped drive those numbers down. Austin Peay only dropped back to pass 11 times in Week 1, with just two attempts over 10 yards. Then, the last two games have been against the No. 25 and No. 1 quarterbacks, respectively, in the quickest time to throw. South Carolina’s Jake Bentley has gotten rid of the ball in an average of 2.19 seconds (25th), while Middle Tennessee’ Brent Stockstill gets rid of the ball in 1.86 seconds on average – the quickest in the FBS. Still, those pass-rush numbers are not optimal going into a matchup with our No. 18 highest-graded quarterback who’s also on our Heisman radar. Lock has the highest grade of his career up to this point in the season, with numbers such as:

The clean pocket numbers are particularly relevant to this game given the above numbers on UGA’s pass-rush. Lock has only been pressured on 14.4 percent of his dropbacks, the second-fewest percentage in the FBS just ahead of Fromm, and only sacked once in 118 dropbacks. 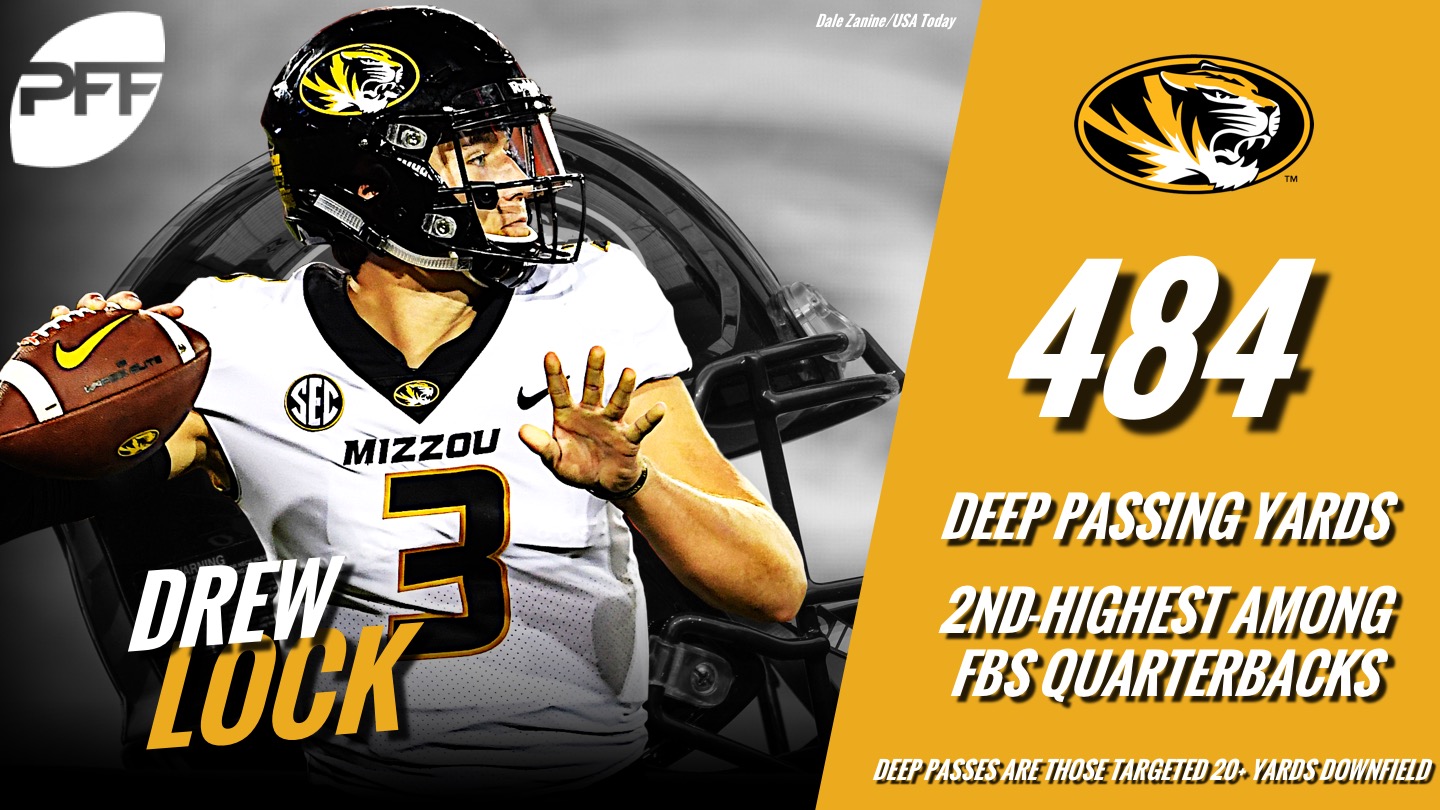 Will Kirby Smart and Mel Tucker try to bring extra rushers to generate pressure and disrupt Lock? History says no. Lock came into last season’s game with similar numbers, especially throwing deep, and the Bulldogs only blitzed Lock six times in 25 dropbacks last October. This season, UGA has only blitzed the opponent on 16 occasions. They have relied on their overall team speed and elite coverage and tackling skills to smother the opponent and eliminate big plays for the offense. They have missed only 11 tackles in three games and will rely in coverage on the No. 4 overall player, and No. 1 corner, on our draft Big Board in Deandre Baker (87.9) and possibly the best safety tandem in college football in sophomore Richard LeCounte (86.0) and junior J.R. Reed (82.7).

Will Georgia finally generate pressure on the quarterback? Or will Drew Lock be comfortable and do damage from a clean pocket all day? Will none of that matter and Georgia’s dominant offensive line control the entire game?