The tune-ups are in the books. Now, for both Georgia (No. 3 PFF ELO) and South Carolina (No. 25), the season gets cranked up in a hurry as the Bulldogs travel to Williams-Brice Stadium to face an experienced Gamecocks squad looking to knock off the reigning SEC champions and gain a leg up in the SEC East race.

In one of the better individual matchups of the season, our top-rated cornerback and No. 7 on the PFF Top 50 Deandre Baker will see a lot of No. 33 on the same list, wide receiver Deebo Samuel, this Saturday in Columbia. While Baker was not targeted in the opener against Austin Peay, Samuel was QB Jake Bentley’s primary target, as he hauled in seven receptions on nine targets for 56 yards and a touchdown in the Gamecocks’ opener against Coastal Carolina. 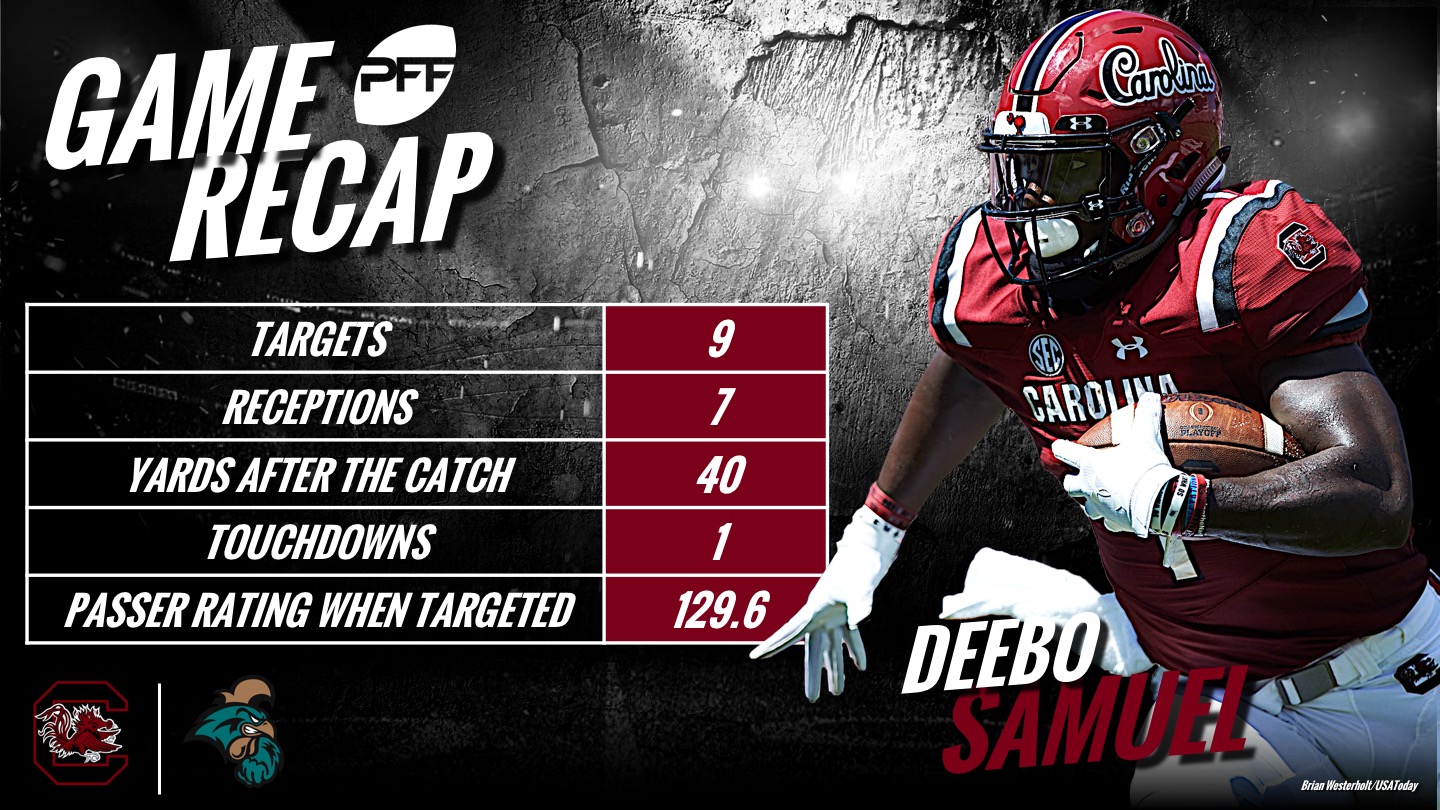 When Samuel’s been on the field in his career, which is basically the same amount of time he’s missed due to injury, he has been a difference maker. In 10 games in 2016, he compiled an 81.4 grade, 7.2 yards after the catch per reception, the 10th-best catch rate on deep passes (55.5 percent) in the FBS and a 102.0 passer rating when targeted. In the three games he played in 2017 before breaking his leg, Samuel registered a 79.0 grade and 126.9 passer rating when targeted.

Samuel is not the only threat for South Carolina, though. Junior Bryan Edwards (72.0 in 2017) was targeted 102 times a season ago and brings a big, physical outside option, while sophomore slot receiver Shi Smith (passer rating of 116.8 when targeted in 2017) works the inside. Those two combined to catch 8-of-10 targets for 105yardsd and a touchdown in the opener. Bentley, in general though, did not miss much in Week 1 regardless of the target, as his 85.7 percent accuracy percentage was tied for sixth best in the nation during the opening week. 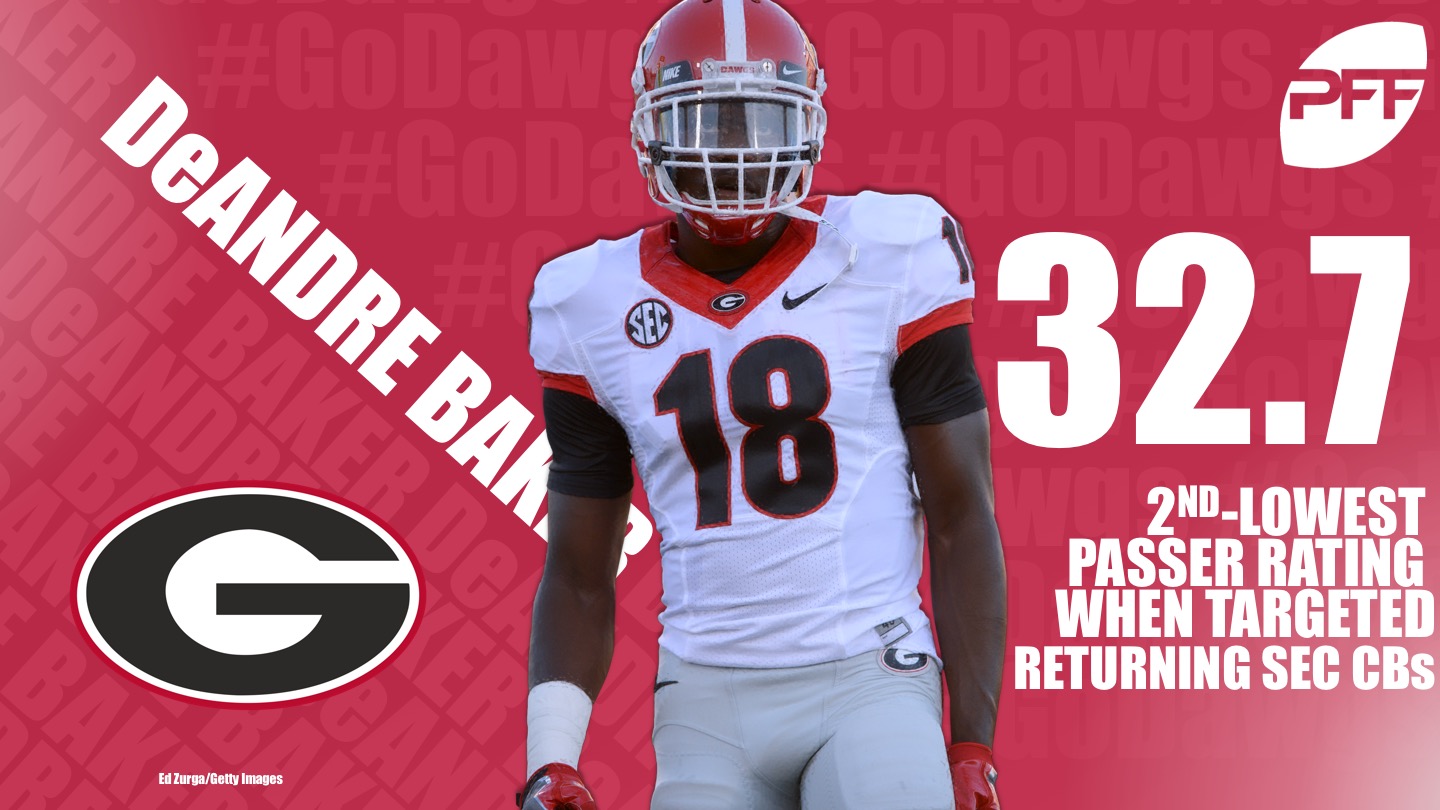 Baker and his 32.7 passer rating allowed in 2017 will certainly be tested more this week, but look for Bentley to target the inexperience around Baker. While Georgia hopes to get back junior Tyrique McGhee (65.8) this week, the remainder of the secondary players getting meaningful snaps, outside of safety J.R. Reed (72.0), are seeing their first meaningful action for the Dawgs. Opposite Baker is true freshman Tyson Campbell (70.2 in Week 1), who allowed only one reception on five targets and a passer rating of 39.6 against Austin Peay. Others you will see trying to slow down the aforementioned receivers are sophomore safety Richard Lecounte (63.9 in Week 1), sophomore William Poole (81.3), sophomore Deangelo Gibbs (73.1) and sophomore Mark Webb (66.2) among others.

Just as the Dawgs’ defense must contend with multiple threats, the Gamecocks’ defense will be tested all over the field on Saturday. As our own Steve Palazzolo and Zac Robinson highlighted earlier this week, Georgia’s offense is stocked full of playmakers at every level.

In Week 1 against Austin Peay, QB Jake Fromm (63.1) was his typical accurate self (80.0 percent accuracy percentage) within an extremely vanilla gameplan as the playmakers did the rest. Wide receiver Mecole Hardman (71.4) picked up where he left off last season, hauling in two of his three targets for 63 yards, including a 59-yard catch for a touchdown. Former five-star recruit and Cal transfer Demetris Robertson took his lone touch 72 yards on a jet sweep for a score. The highest-graded returning player, running back D’Andre Swift (73.2 in Week 1), averaged over six yards per touch, including 4.13 yards per route run (seventh best in FBS in Week 1). All told, 10 different players combined for 10.1 yards per attempt rushing, while 11 different players recorded a reception at 10.7 yards per catch, truly showing this offense's ability to break away.

In the end, who will limit the big plays each team is highly capable of producing? Which team can pressure the quarterbacks into mistakes? We’ll find out Saturday afternoon in this early season battle for the SEC East’s driver’s seat.