The Week 9 Eckrich Pac-12 Team of the Week powered by PFF saw some impressive performances and, of course, the strength of opponent also factored into the overall selections as did the PFF player grades. In a vintage Costello performance that reminded us all why he was on the 2020 NFL Draft radar after his strong 2018 campaign, Costello handled the Arizona defense with relative ease on Saturday. He threw for 322 yards, completing 31-of-44 passes and three scores. He secured 15 first downs on his 45 dropbacks and had a terrific game downfield, completing 7-of-14 passes for 163 yards and all three scores on throws targeted at least 10 yards downfield.

Verdell finished with a whopping 257 yards on his 23 carries, including an impressive 89-yard touchdown run in Oregon’s dramatic win over Washington State. He gained 135 of his yards after contact and broke a national-best 12 tackles in a strong performance.

Moss ran all over the Cal defense en route to a 35-0 dominating victory for the Utes. He took his 17 carries for 115 yards, two touchdowns and another three first downs. Moss was stellar outside of his offensive line as well, gaining 3.82 yards after contact per attempt and forcing five missed tackles, showcasing his elusiveness in the open field.

Way back on Friday night, Pittman and the Trojans outlasted and outscored the Colorado Buffaloes. On eight targeted passes, he ripped off seven catches for 156 yards, two scores and three first downs. He gained 75 of his yards after the catch, including the game-winning catch-and-run effort that gave USC the victory to keep pace in the conference race.

Colorado suffered their fourth straight loss against USC, despite Shenault Jr.’s strong performance. Shenault hauled in nine of his 15 targets for 172 yards and a 71-yard scamper into the end zone to begin the second half. He generated a passer rating of 122.1, and he forced three missed tackles on his way to the fourth-best receiving grade in the conference.

Fehoko was targeted six times and only made three receptions against Arizona Saturday. However, those receptions were all he needed to gain 97 yards, score two touchdowns and pick up a first down. His play earned the second-best receiving grade among receivers with a minimum of four targets in the PAC-12.

Costello looked to Parkinson early and often against the Wildcats, trusting his tight end multiple times to convert on key downs. Parkinson reeled in five of the nine balls thrown his way for 68 yards. All five of his receptions gained first downs, building the rapport between himself and his quarterback.

In what is becoming a common sight, Sewell made his way to the National Team of the Week once again. On 39 snaps in pass protection, he allowed just one pressure, while he also was beyond dominant in the run game. He finished with a 91.1 run-blocking grade, second only to Wills above him, and a clear 2.0 grade points away from the next closest tackle.

There's no surprise that another Duck is on this list, as the Oregon starting five are the best unit in the country. Lemieux allowed a single hurry on his 39 pass-blocking snaps while finishing with the third-highest run-blocking grade in the country among all guards.

Hanson isn’t the only Oregon offensive lineman to make the list here as the team’s center finished with a dominant game across the board. He allowed two QB hurries on 39 pass-blocking snaps and trailed only Army’s Peyton Reeder in run-blocking grade this weekend.

Ford was a stalwart on the Utah offensive line, creating holes in the run game and giving his quarterback time to drop back and torch the Cal secondary. He led the way for Moss’ impressive night, posting the fifth-highest run-blocking grade in the conference among all offensive lineman with a minimum of 20 total snaps. On top of this, Ford did not forfeit a sack against the Bears' front seven on 25 reps in pass protection.

Much like his fellow Oregon offensive lineman, Throckmorton was outstanding in all phases of the game against Washington State. He posted the second-best run-blocking grade in the PAC-12 and the sixth-best in the nation. Throckmorton allowed just one pressure on 39 snaps in pass protection, providing Justin Herbert a clean pocket to pick apart the Cougars' defense. 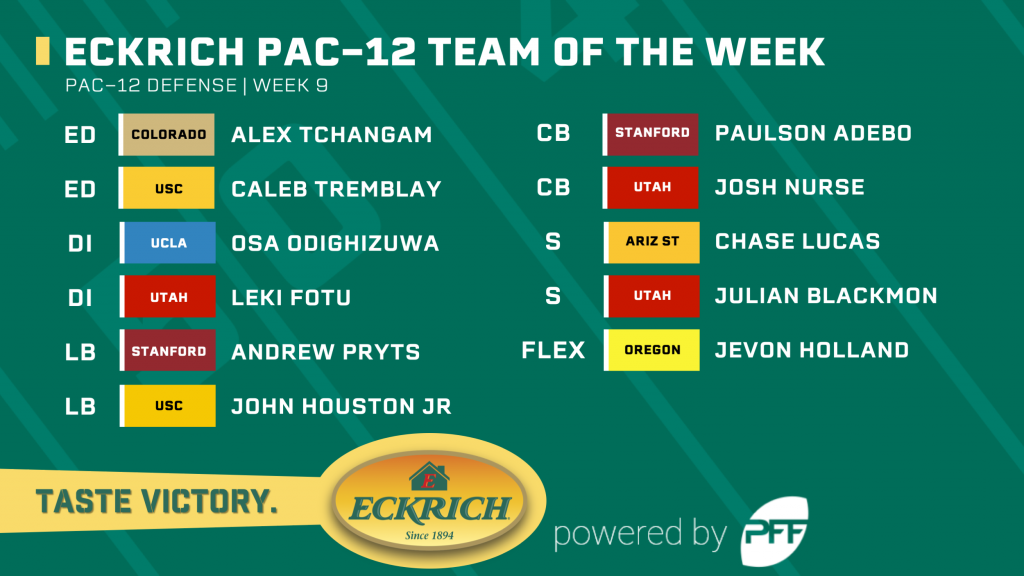 Tchangam was one of the only bright spots on a Colorado defense that conceded 35 points to USC. He generated a conference-leading six total pressures off the edge, as well as the highest pressure percentage among edge defenders with a minimum of 15 pass-rush snaps (25.0%). His performance rushing the passer and his play in run defense led to an overall defensive grade that ranked second among edge defenders.

Although USC left Saturday’s game victorious, the defense as a whole did not play well, forfeiting 31 total points to the Buffaloes. Tremblay performed well, however, forcing four total pressures, winning on 15.6% of his pass-rush snaps and nabbing two defensive stops against the run.

For the second consecutive week, Odighizuwa finds his way to the National Team of the Week, and for good reason. He recorded six total pressures on 37 pass-rushing snaps while finishing with three defensive stops in the run game. He didn’t miss a tackle and was utterly dominant up the middle for UCLA.

Fotu was a force up the middle for the Utes, beating his blocks in addition to hindering Cal’s ability to run the ball. He produced one sack, one hurry and the second-best run-defense grade among all defensive interior players, just behind Odighizuwa.

Pryts was excellent in both coverage and run defense against Arizona. He recorded six total tackles and three defensive stops en route to the conference’s best run-defense grade among all defenders. Pryts was also targeted three times in coverage, allowing zero receptions for a passer rating of 39.6 when targeted, the equivalent of spiking the football straight into the turf.

Houston Jr. contributed in every facet of the defense but played his best in coverage. The USC product nabbed eight total tackles, one hurry on just two pass-rushing snaps, one defensive stop and one catch on one target on 44 coverage snaps. He allowed a mere six yards on the reception and broke up a pass that wasn’t toward his direction, leading to the best coverage grade among linebackers in the PAC-12.

The Stanford defense stole three possessions by way of interception against the Wildcats, two of which were snatched by Adebo. He was targeted five times on 53 snaps in coverage, conceding three receptions for a paltry 24 yards, and although he did allow one touchdown, the two interceptions more than make up for it.

Nurse was crucial for the Utes' secondary in the crushing of the Cal offense. He saw six passes thrown into his coverage, forfeiting a measly two receptions for 16 yards and breaking up one pass. In addition to his play against the passing game, Nurse blitzed the quarterback one time, stripping him of a football that would eventually be recovered the Bears. His effectiveness netted him the ninth-best defensive grade among all cornerbacks in the nation.

Arizona State did not have many defenders play well in the 42-32 defeat against UCLA, but Lucas is one of the exceptions. Lucas was smothering in coverage, allowing a paltry three yards on two receptions. He also created four defensive stops as well as forcing a fumble and recovering another on the night, contributing to his defensive grade that tied for second-best among safeties.

The conference's leader in defensive grade, Blackmon is the last Utah defensive player to make the list after their 35-0 thrashing of Cal. Blackmon was not tested from his safety position in the passing game, but he did nab a pass breakup, which led to the second-best coverage grade among safeties in the conference.

Holland was targeted nine times in coverage, allowing eight receptions for 95 yards. One glance at those numbers and one would believe Holland was torched all game, but a closer look reveals Holland actually played well. He played 55 coverage snaps, tied for fifth-most in the nation, and allowed the 29th-most yards per coverage snap. The one incompletion he forced was a 19-yard pick-six that swayed the momentum to Oregon heading into the second half.