The Week 9 Eckrich Team of the Week powered by PFF saw some impressive performances and, of course, the strength of opponent also factored into the overall selections as did the PFF player grades. 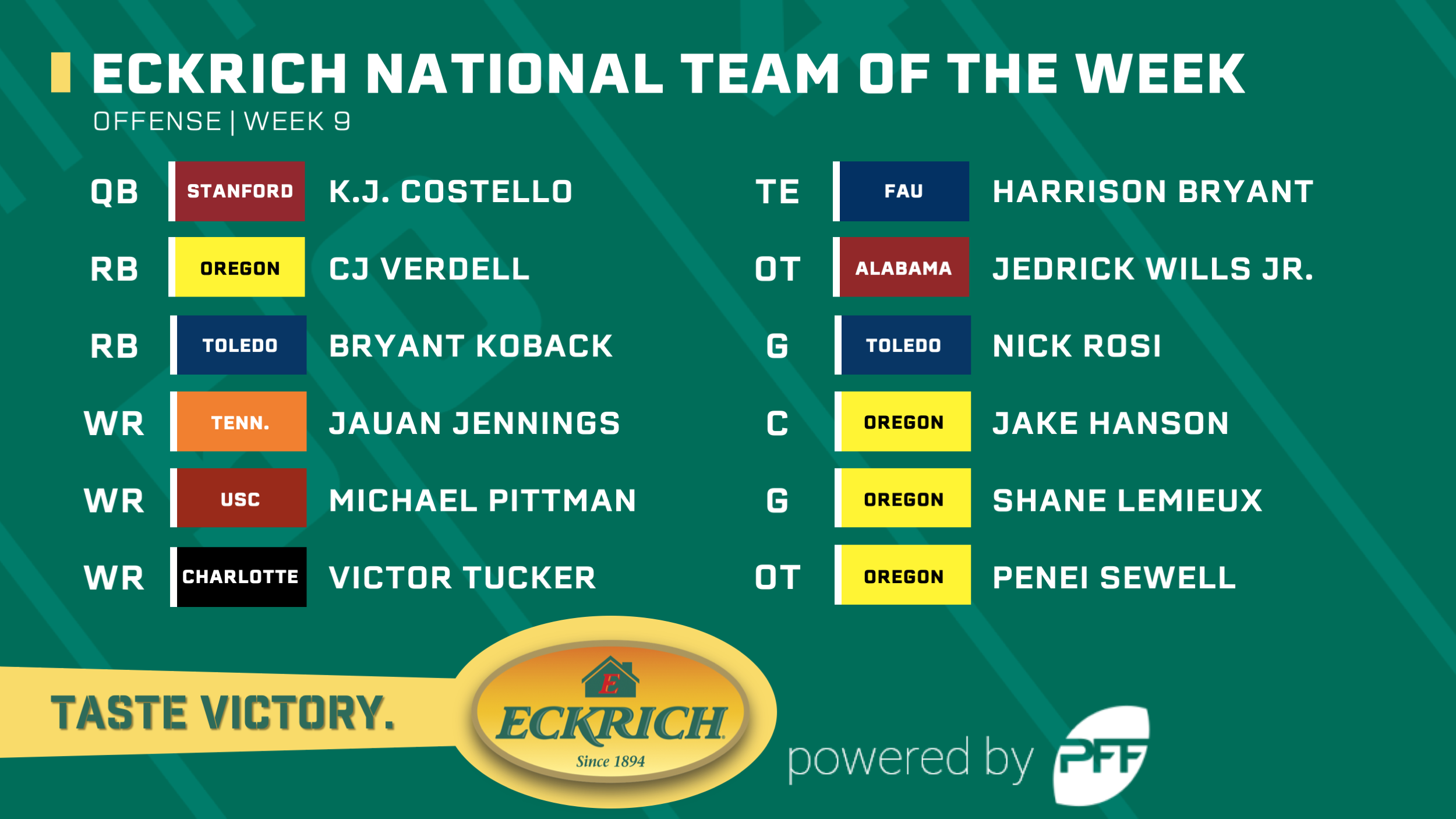 In a vintage Costello performance that reminded us all why he was on the 2020 NFL Draft radar after his strong 2018 campaign, Costello handled the Arizona defense with relative ease on Saturday. He threw for 322 yards, completing 31-of-44 passes and three scores. He secured 15 first downs on his 45 dropback attempts and had a terrific game downfield, completing 7-of-14 passes for 163 yards and all three scores on throws targeted at least 10 yards downfield.

Verdell finished with a whopping 257 yards on his 23 carries, including an impressive 89-yard touchdown run in Oregon's dramatic win over Washington State. He gained 135 of his yards after contact and broke a national-best 12 tackles in a strong performance.

This is not the first time we've seen Koback here on this list, and with the way he's running in 2019, it probably won't be the last. He totaled 258 yards on the ground that included 175 after contact and tied with Verdell in forcing 12 missed tackles on the ground. He averaged 8.1 yards per carry and had two scores with 10 additional first-down runs.

Jennings and the Volunteers withstood perhaps the catch of the year (we see you Bryan Edwards) and the South Carolina Gamecocks, as Jennings was dominant in the game. He was targeted eight times and hauled in seven catches for 174 yards, two scores and five first downs. He racked up 65 yards after contact, forcing two missed tackles in the process and saw a perfect passer rating of 158.3 when targeted.

Way back on Friday night, Pittman and the Trojans outlasted and outscored the Colorado Buffaloes as Pittman himself tallied a similar stat line to Jennings. On eight targeted passes, he ripped off seven catches for 156 yards, two scores and three first downs. He gained 75 of his yards after the catch including the game-winning catch-and-run effort that gave USC the victory to keep pace in the conference race.

Hauling in the game-winning catch is a trend here as Tucker separated at the catch point from his defender with ease in Charlotte's come-from-behind win over North Texas. He finished the night with 10 receptions for 140 yards with the score and an additional five first-down receptions to his credit. He saw a 143.1 passer rating when targeted in the 49ers victory.

Hauling in all eight of his targeted passes for 92 yards, Bryant was absolutely dominant for the Owls in Week 9. He moved the chains on eight receptions and scored another as he also forced two missed tackles and racked up a 154.2 passer rating when targeted. Combine that with plus-grades in the run and in pass protection and you have a dominant all-around tight end performance.

The Alabama offense rolled against Arkansas and Wills was just one of the many characters with dominant grades. He finished with the nation's highest run-blocking grade among tackles and didn't allow a single pressure on his 28 snaps in pass protection.

Rosi and the Rockets secured a big win in the MAC against Eastern Michigan due to a dominant ground game as Rosi was a big part of that. He finished with the nation's fourth-highest run-blocking grade and allowed all of one QB pressure on his 22 reps in pass protection.

Hanson isn't the only Oregon offensive lineman to make the list here as the team's center finished with a dominant game across the board. He allowed two QB hurries on 39 pass-blocking snaps and trailed only Army's Peyton Reeder in run-blocking grade this weekend.

No surprise again that another Duck is on this list as the Oregon starting five are the best unit in the country. Lemieux allowed a single QB hurry on his 39 pass-blocking snaps while finishing with the third-highest run-blocking grade in the country among all guards.

In what is becoming a common sight, Sewell makes his way to the national Team of the Week once again. On 39 snaps in pass protection, he allowed just one pressure while he also was beyond dominant in the run game. He finished with a 91.1 run-blocking grade, second only to Wills above him, and a clear 2.0 grade points away from the next closest tackle. 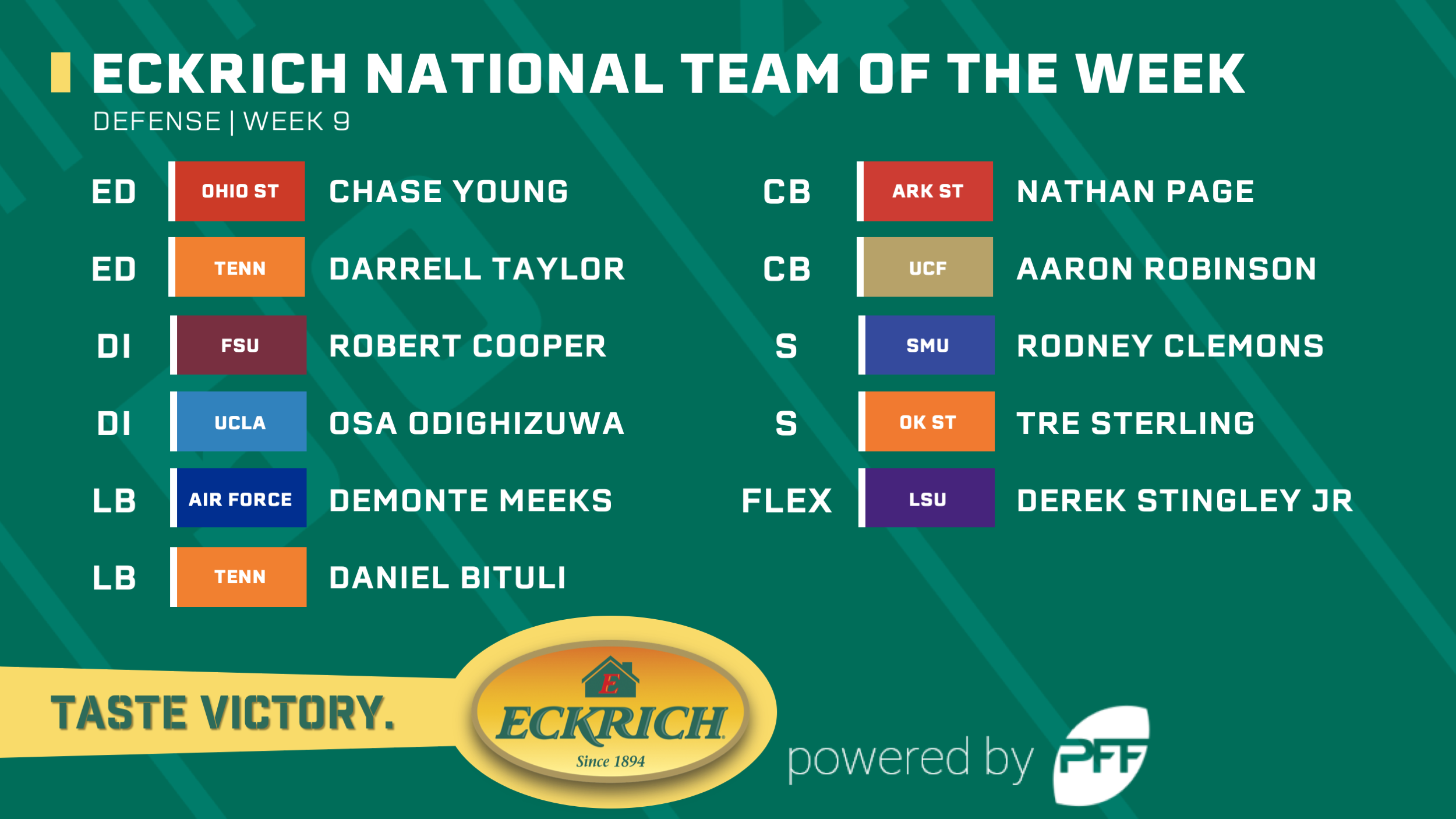 Owner of one of the largest game grades we've ever given to any player at any position for a single game, Young put himself nationally on the Heisman radar with his performance against Wisconsin. If he was third on our Heisman list last week (and as high as second, three weeks ago), he's vaulting up not only our boards but the nation's as well as he finished with six total pressures that saw him get home with four sacks. He's the most dominant player in all of college football and against one of the nation's most NFL-ready offensive lines, he put his dominance on display to the national audience.

The rest of the country is playing catchup to Young and his impressive games that come week in and week but as Taylor had a strong performance himself, in elite fashion. He finished with three pressures that included two sacks on 31 pass-rushing snaps. He chipped in with two more stops in the run game and batted two passes at the line of scrimmage as well.

Not Marvin Wilson, not Cory Durden but Robert Cooper this time from the interior of the FSU defensive line. Cooper finished with two sacks against Syracuse as well as six total tackle attempts without a single miss. He recorded two stops in the run game and was seemingly unblockable all afternoon for the Seminoles.

For the second consecutive week, Odighizuwa finds his way to the national Team of the Week, and for good reason. He recorded six total pressures on 37 pass-rushing snaps while finishing with three defensive stops in the run game. He didn't miss a tackle and was utterly dominant up the middle for UCLA.

The Falcons, led by their defense, got an incredibly impressive and important victory over Utah State to keep their MWC title hopes alive. Meeks was a big reason for their success as he finished with four pressures that included two sacks, eight total tackles without a miss and six defensive stops in the game that limited the Aggies to very few yards either to his side in the run game or into his coverage areas in the passing game.

The second Volunteer to make the national Defense of the Week and third Tennessee player overall as Bituli racked up 14 total tackles in the game and didn't miss a single tackle attempt. Of those, 13 tackles were solo and he recorded seven defensive stops while limiting receivers to just seven yards in his coverage.

Leading all the nation's cornerbacks in coverage and overall grade, Page churned out a ridiculous line on the stat sheet in the RedWolves victory over Texas State. On three targeted passes as the primary coverage defender, Page broke up one and intercepted the other two as he didn't allow a single reception and came away with two takeaways for a 0.0 passer rating into his coverage.

Robinson was heavily targeted by Temple in the Knights win, seeing eight passes come his way. All he did was intercept two of them, limit receivers to just 43 yards and record another pass breakup. He made three solo stops in coverage and limited the yards after the catch very well during an impressive outing in coverage.

Clemons all but ended the game for SMU with a sealing interception but he was dominant throughout the contest against Houston on Thursday night. The Mustangs got to 8-0 and Clemons was certainly a big reason why as he made nine total tackles without a miss and allowed just 11 yards into his coverage. He broke up two passes and made the interception to allow just a 27.1 passer rating into his coverage.

Sterling and the Cowboys secondary put the clamps on the Iowa State passing attack late in the contest against the Cyclones as Sterling finished the outing with just a 39.6 passer rating into his primary coverage. He was targeted six times, allowed four receptions for just 31 yards including zero yards after the catch. He made an interception and has two pass breakups in the contest while also making nine solo tackles and two defensive stops in the game.

Just another terrific outing from a true freshman playing well above his age. Stingley was targeted 10 times against Auburn and allowed just two receptions for 50 yards (34 of which came on a ridiculous catch by Seth Williams that seemed to be a ball thrown away by Bo Nix). Stingley made one of the better interceptions of the season when he took the ball from over the top of his receiver and saw just an 8.3 passer rating when targeted against Auburn.