Rookie of the Year Awards 2022: Odds and best bets ahead of Week 8

• Kenneth Walker III enters the OROY conversation: Since taking over as the starter in Week 6, Walker leads the NFL in yards (265), touchdowns (3) and broken tackles (15). He’s already 16th in the NFL in yards despite being 29th in carries.

• Value in Chris Olave: Olave already ranks ninth among all wide receivers in yards despite playing only six games.

• Sauce Gardner‘s DROY Award to lose: The Jets cornerback ranks first in pass breakups (10) and third in yards allowed per target (3.8) among all cornerbacks this season.

The races for the Rookie of the Year Awards were a jumbled mess when we last checked in. Now, there are some clear-cut favorites. Let’s dive into the odds, outline who should win the award, and then give some best bets.

Offensive Rookie of the Year

A season-long bet for a running back will always give me pause for precisely the reason we’ve just seen play out: Walker wasn’t even in the mix until Rashaad Penny landed on IR with an ankle injury, while Breece Hall was a favorite until he tore his ACL.

What I’m trying to say is the increased injury risk at the position doesn’t get properly baked into the numbers.

That being said, Houston's Dameon Pierce is your Offensive Rookie of the Year at the moment. He’s toted the rock effectively for a fairly hapless offense, averaging 4.8 yards per carry. You can see how his stats stand up to the rest of the league below.

He’s the only rookie on offense with a legitimate claim to top-five status at his respective position over seven games this season.

It’s firmly a three-horse race right now, and that's why I like this bet. I prefer Walker's over Pierce’s odds because 1). The notoriety Walker will get on a possible playoff team, and 2). The sheer efficiency we’ve seen from Walker so far. Since taking over as the starter in Week 6, Walker leads the NFL in yards (265), touchdowns (3) and broken tackles (15). He’s already 16th in the NFL in yards despite being 29th in carries.

The only thing that’s held him back is opportunity, as he was the backup for the first five weeks. However, that’s changed with Penny out for the season, and we’re seeing why Walker was RB1 on the PFF 2022 Draft Board. His 86.2 PFF rushing grade ranks fifth among all backs in the league, which is why I’m betting on his continued statistical success.

This was my favorite bet in Week 3 when Olave was at +400, and that hasn’t changed one bit. And that’s because Olave already ranks ninth among all wide receivers in yards despite playing only six games.

Even though a good portion of his production has come without Michael Thomas or Jarvis Landry on the field, I’m still bullish on him because Olave isn’t getting pumped “fake” yards on simple concepts or screens. Just take a look at his route heat map: 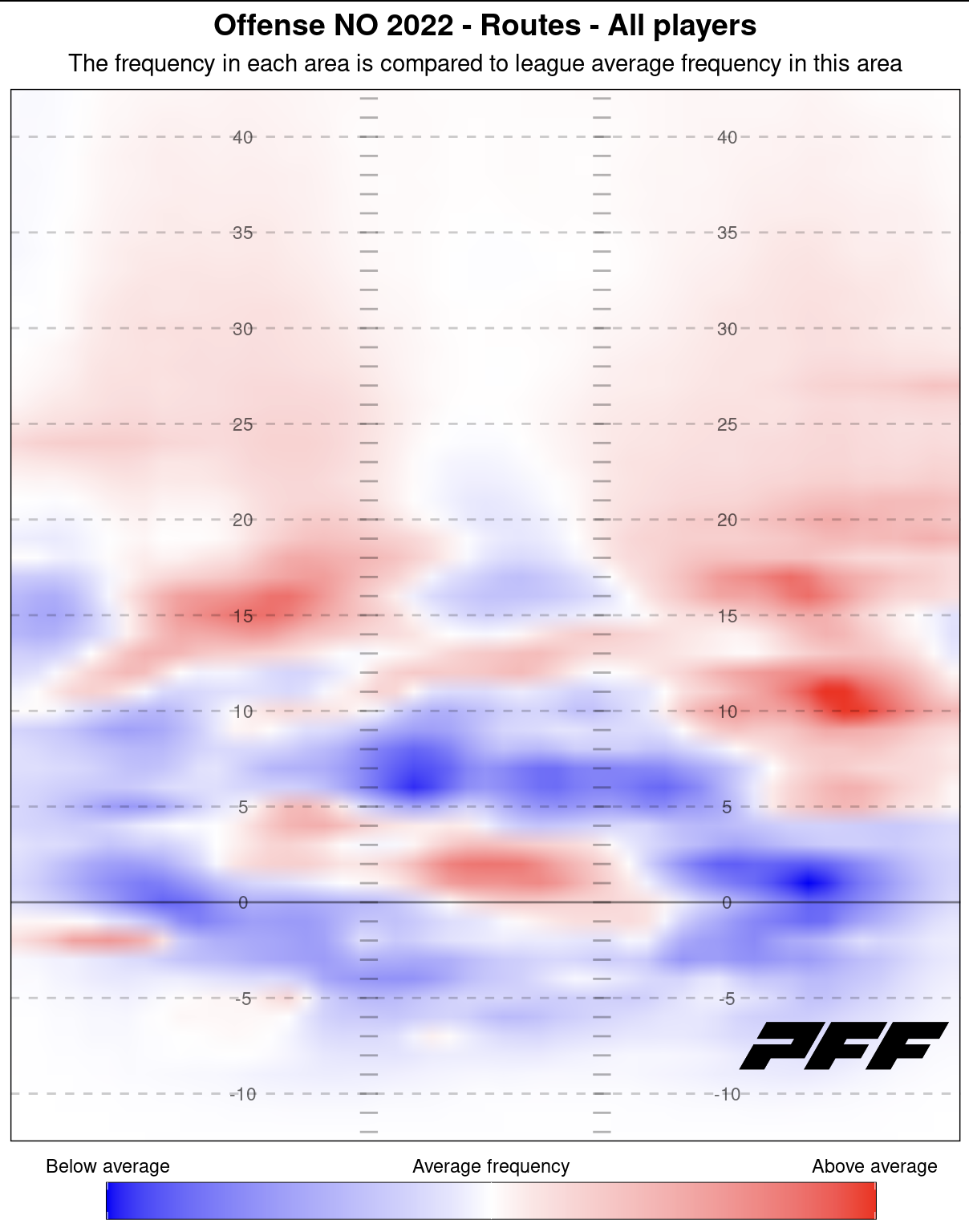 That squares with Olave’s 17.4-yard average depth of target, the second deepest in the NFL this season. Long story short: I’ll bet on Olave’s production continuing because he’s had to earn it via his route running.

DEFENSIVE ROOKIE OF THE YEAR

At this point, the only thing standing between Sauce Gardner and winning Defensive Rookie of the Year is staying healthy for 10 more games. While Tariq Woolen deserves his short odds, there isn’t a statistical category outside of interceptions (4 to 1) where he’s outperformed Gardner — and that’s also evident in the grading.

Just look at how impressive Sauce has been in his first season.

Those ranks aren’t among rookies — they’re among the entire NFL. He’s legitimately in the conversation for Defensive Player of the Year at the moment.

There is another player who deserves a shoutout — New England Patriots fourth-rounder Jack Jones, who looks like the real deal. He hasn’t earned a below-average coverage grade since Week 1 and has yielded only 12 catches on 25 targets for 173 yards on the season. The only problem is that he’s not even technically a starter for the Patriots. It’s going to be difficult for him to make up ground averaging only 36.5 snaps per game.

On top of all the statistical dominance, Sauce also has two massive things going for him: name recognition and a massive media market. I mean, the man already has his own wing sauce at Buffalo Wild Wings.

If there is any criticism of his play, it’s that he hasn’t faced too many top-tier passing offenses. But flip on the Bengals tape against that receiving corps with Joe Burrow at the helm, and you’ll be convinced this is the best bet.

This is the only other bet I’d touch now because 1). It is still largely a statistical award, and Hutch’s 4.5 sacks are 1.5 more than any other rookie and rank 17th in the entire NFL, and 2). He may have legitimately turned a corner after the bye week.

Not only has his pass-rushing grade increased nearly every week this season, but he also looked like a different player this week with the Lions allowing him to play standing up rather than with his hand in the dirt. He prefers the former dating back to his days at Michigan, where he was almost an entirely different player standing up:

If that’s the guy we see the rest of the season, Hutchinson is very much still in play for this award.