• Rams-Bucs live-betting gameplan: Given their scripted success and the Bucs' defensive struggles vs script, bet the Rams' live team total under as it creeps above 24.5

• Although Tampa's offense is basically the same on and off script, Sean McVay and Co. average nearly a full point more per scripted drive than unscripted.

• Vikings-Commanders live-betting gameplan: Bet over once the game total drops to 34 — with market failing to price in that these are two of NFL's top-3 scripted defenses, Washington is nearly a full point better off script.

But with 11 games on Sunday in Week 9, it can be quite overwhelming for the bettor to follow the different markets and capitalize on inefficiencies. The goal in this space is to provide angles to monitor and capitalize on specific team tendencies not accounted for in live markets, helping bettors cut through the noise with a gameplan and better process for how to profit live betting.

The Rams' offense is far better on-script than off, scoring nearly a point more per scripted drive vs. non-scripted. 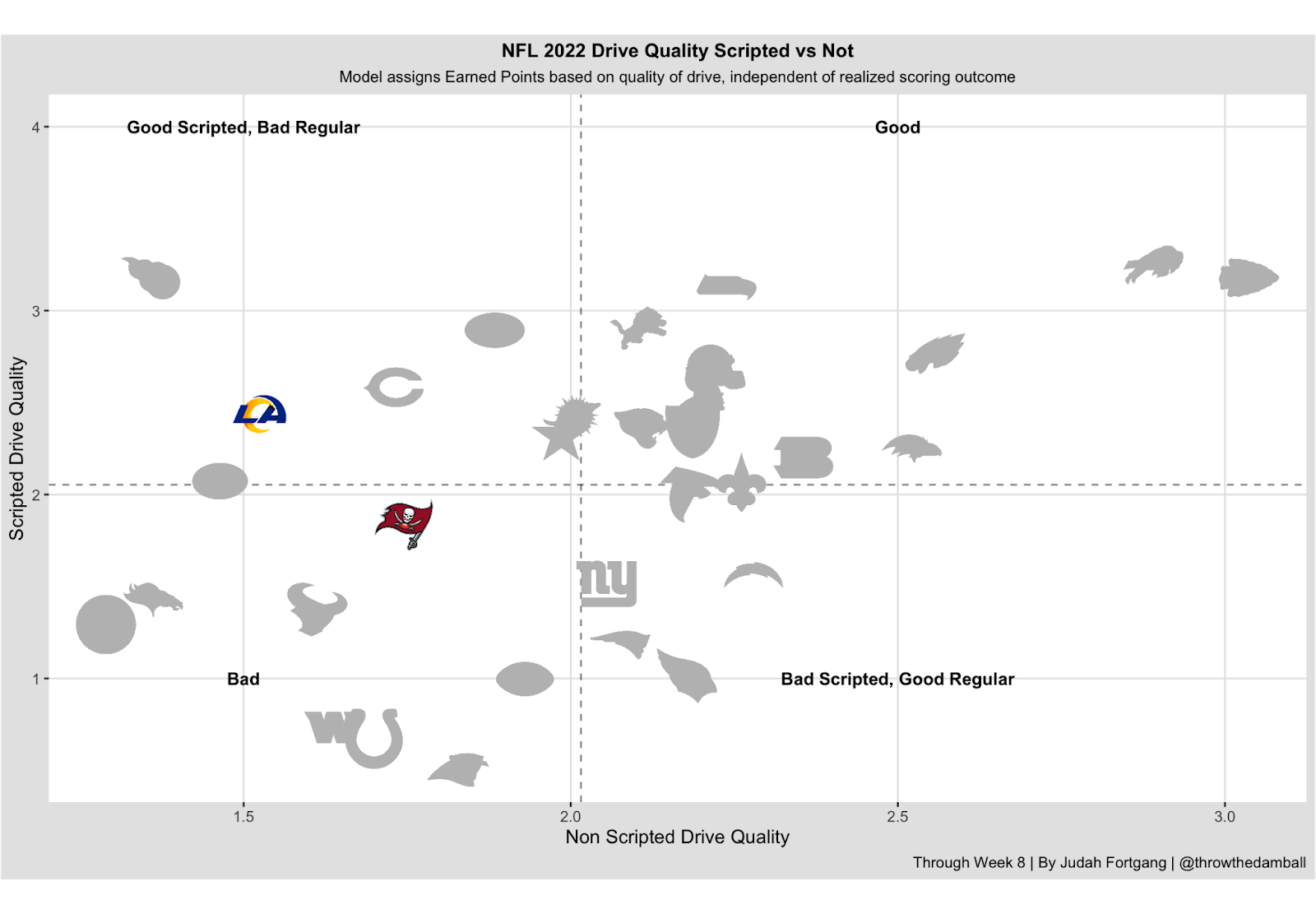 The Bucs? They have essentially the same offense on script and off the script. 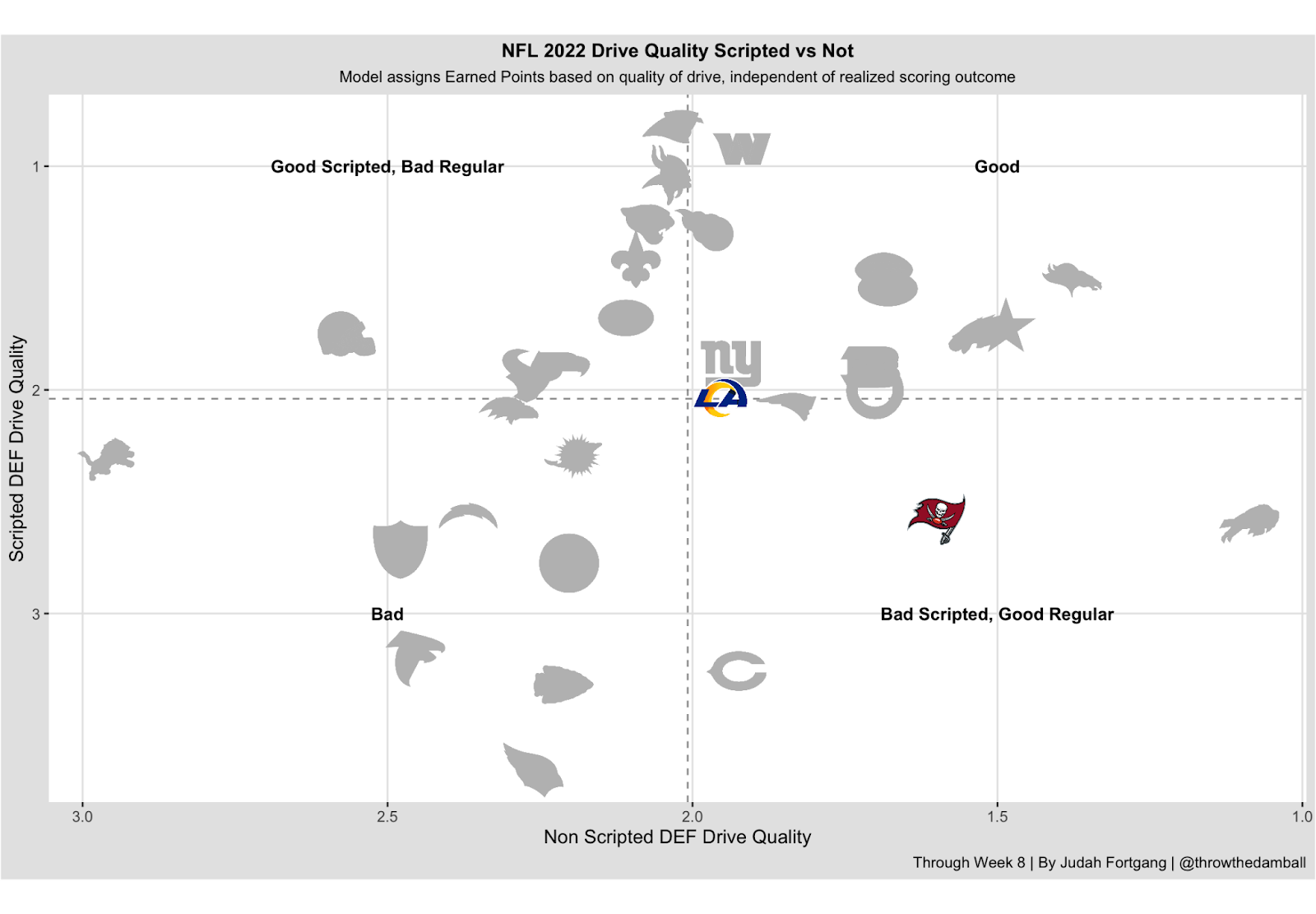 The Bucs also have been one of the NFL's worst defenses facing scripted plays, but they have emerged as a top defense off script.

• I would expect the Rams' offense to jump out to a good start: Considering their success scripted and the Bucs' defensive struggles on scripted plays. If the Bucs' offense is unable to muster anything early, and the Rams jump out to a 7-point lead, this line likely swings back to LA -2.5/3. At that point, considering the predicted struggles of the Rams offense, the Bucs moneyline — or even moving the spread back to the original line at -3 in the alt market —looks attractive.

•  Bet Rams' team total under as it creeps up above 24.5: If Tampa does keep up with Los Angeles, erasing the value on Bucs ML/spread. Again, the live market does not price in the team specific efficiency, and live betting allows us to manipulate timing and capture the predictable market volatility.

Back to our scripted chart, where we have two of the three very best defenses on scripted plays facing off against each other. On the offensive side, the Vikings see little difference scripted vs not, but the Commanders are about .8 points per drive more effective off script. 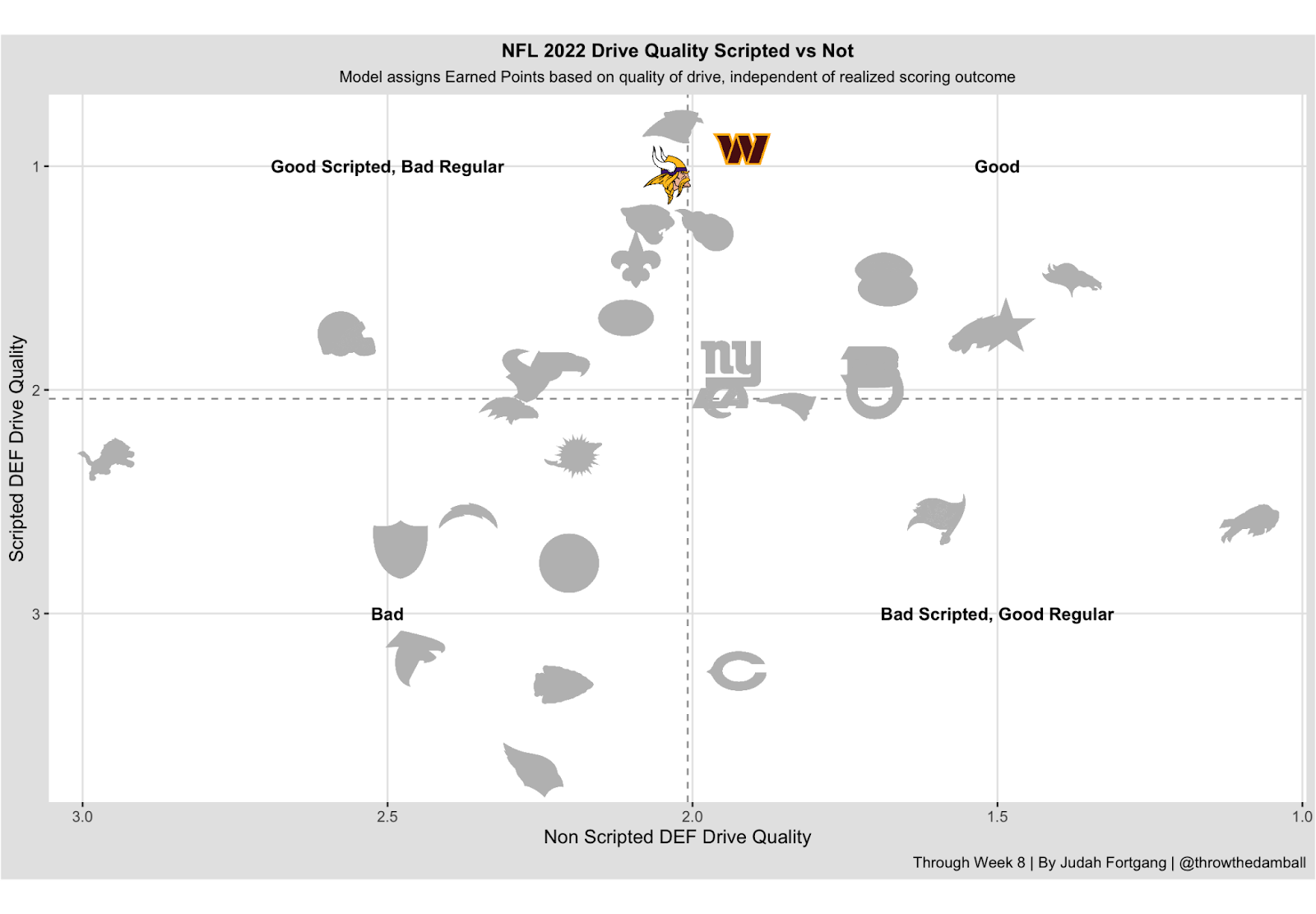 Look for Taylor Heinicke to play conservatively on script, where his 28.4 PFF grade on scripted plays is by the far the worst in the NFL. But off the script, look for Heinckie to uncork some deep balls to push the over.

• If this game starts out slow as we’re expecting, look to bet the game total over as it drops to 34 points on account of a slow start that is not properly priced in.

The Saints have been among the NFL's best run defenses consistently in recent seasons, ranking 3rd in EPA in 2020, 1st last season and 1st again through the first eight weeks of 2022. 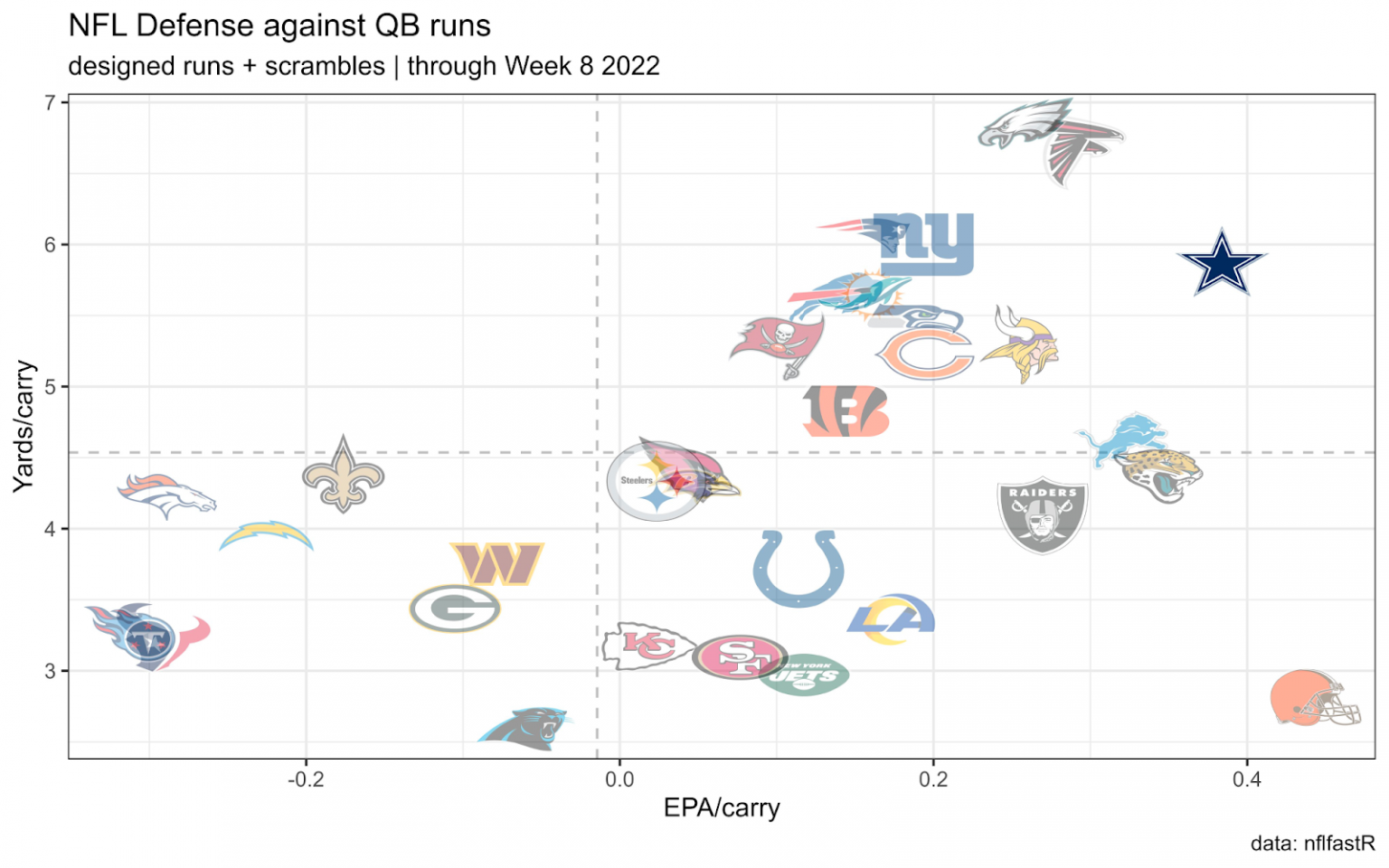 As Dan Morse showed, the Saints have also been quite good defending against running QBs so far this season.

• Playing Lamar Jackson is a totally different beast than any other running QB, and the beauty of betting an island game live is that we can focus on it singularly and monitor exactly how the Ravens are running their offense. Do the Saints have a “spy” to ensure Lamar can’t run? Are they loading the box to stop the run? 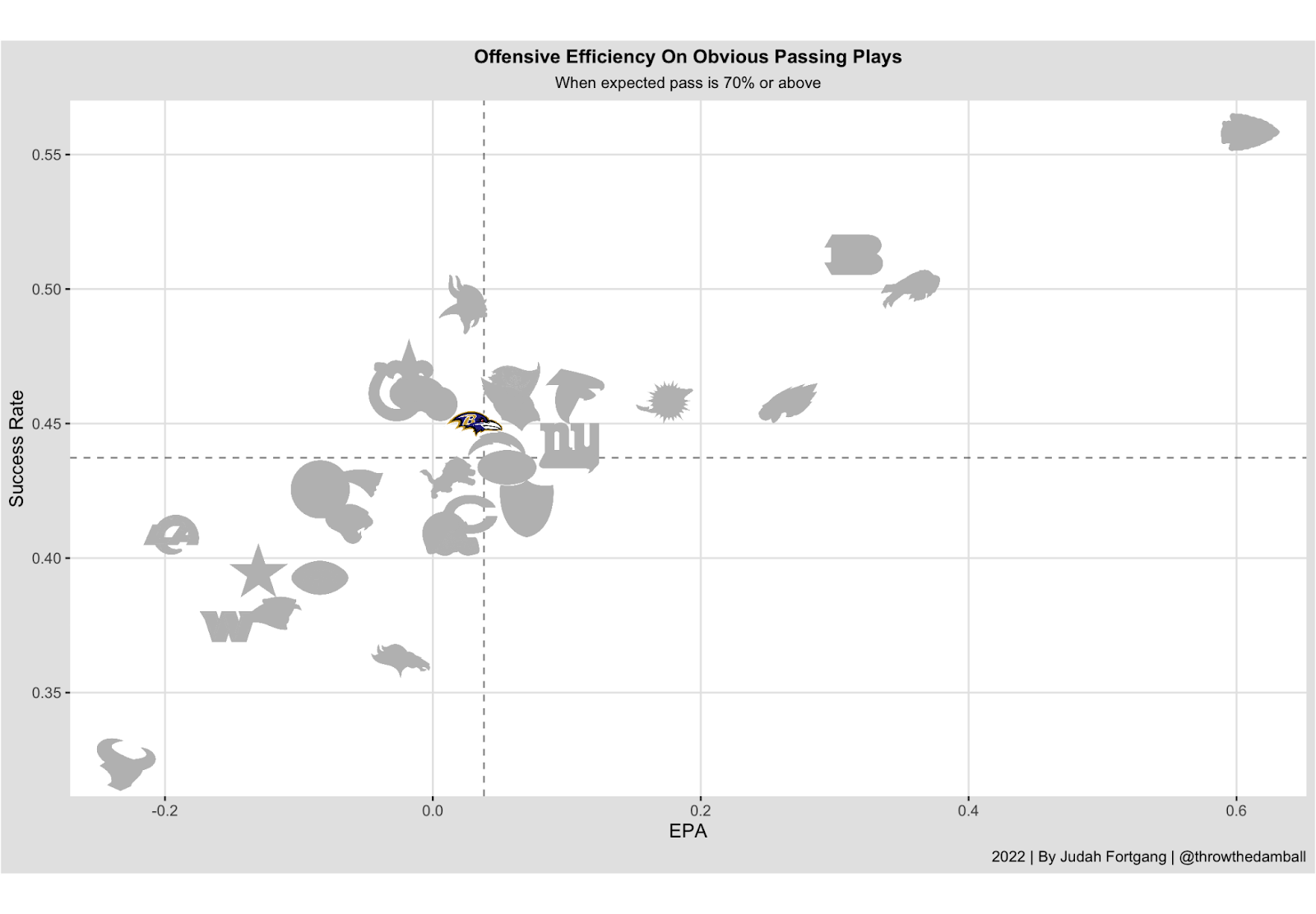 If the Saints are keeping Jackson and the Ravens' run game in check, and Baltimore is forced to drop back to pass, the offense goes from a top-5 unit to completely average.

• If the Saints are successful early in stopping the run, forcing the Ravens to abandon it — or even if they continue to run inefficiently — bet the Saints' spread live, and the Ravens' team total under.