• Bet Matthew Stafford u261.5 pass yards vs 49ers: Stafford is the NFL's worst quarterback this season when there's at least a 70% likelihood of a pass.

In Week 7, our data-backed QB prop bets went 1-2, as Joe Burrow went over 37.5 yards for his longest completion, and Justin Fields went over 167.5 yards passing (despite our 7 yards of closing line value from article publish to kickoff), but we hit on Jared Goff under 1.5 passing touchdowns. While it marked our first losing week since Week 3, our process and results have been sound, so we can continue to use similar data points as we look to bounce back in Week 8. 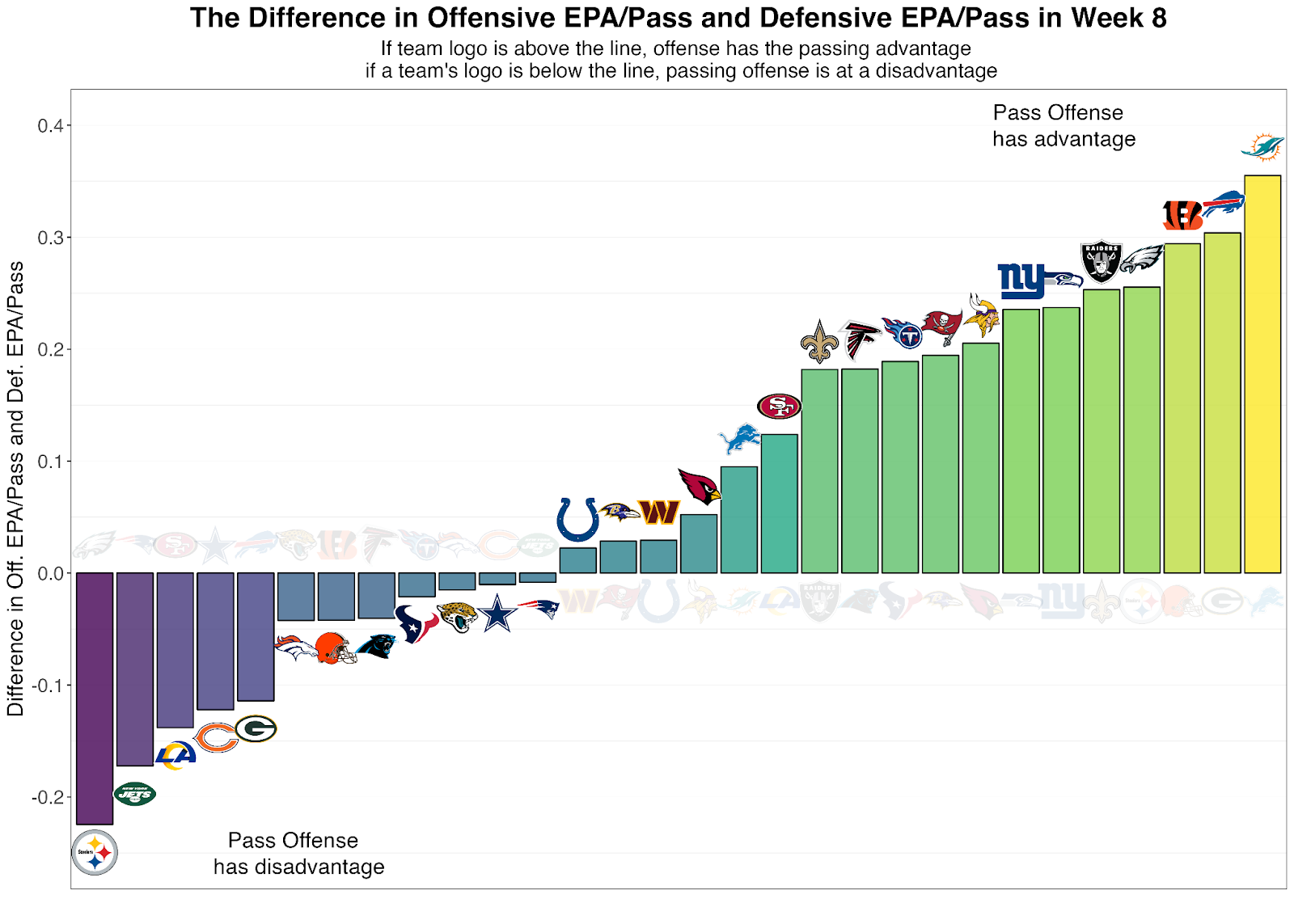 • The Steelers Have a Massive Passing Game Disadvantage: Pittsburgh's passing game is ranked 28th in EPA per attempt this season. The Eagles have the best EPA per pass against. This is the biggest passing matchup disadvantage for an offense of Week 8.

• Kenny Pickett Throws Interceptions; the Eagles pick them off: Pickett has thrown an interception on 5.3% of his passes, 2nd-most-often in the NFL behind New England Patriots quarterback Mac Jones. The Eagles also have the 3rd-highest interception rate forced in the league at 3.9%, trailing only the Buffalo Bills and Chicago Bears. 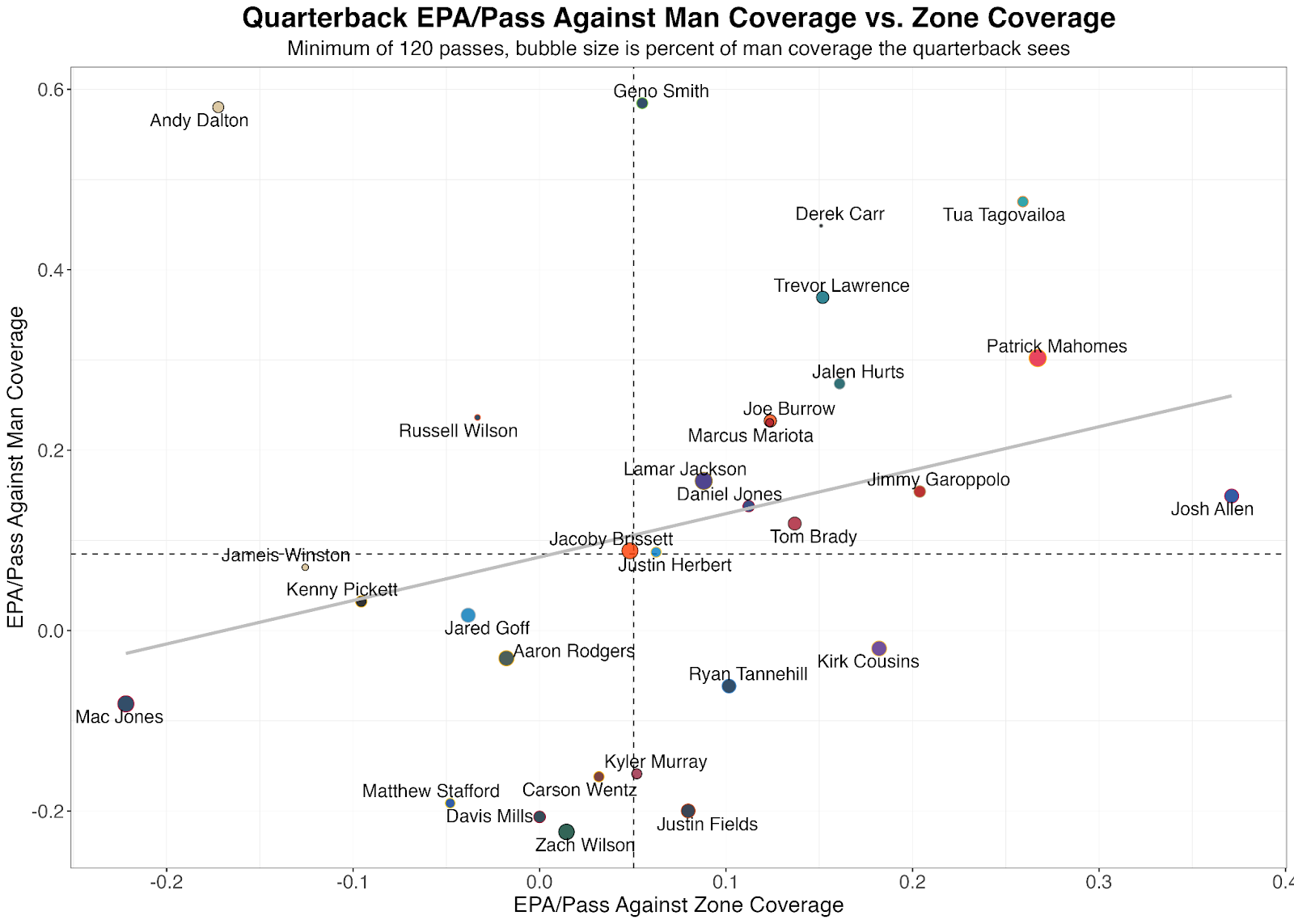 • The Dolphins Do Well Against Man Coverage: This season, Tagovailoa ranks 3rd in Expected Points Added (EPA) per pass at 0.48 against man coverage, compared to only 0.26 EPA per pass against zone coverage. The Lions play the 2nd-most man coverage in the entire NFL (50% of passing plays).

• The Lions Don’t Have the Corners to Guard Hill and Waddle: The Lions' top two corners, Jeff Okudah and Amani Oruwariye, have earned a 58.4 and 29.1 PFF grade, respectively, this season. Okudah has held his own at times, but Oruwariye has allowed 15 first downs and a 122.1 passer rating when targeted. Tyreek Hill and Jaylen Waddle rank 1st and 13th, respectively, in PFF receiving grade among wide receivers and should be tough matchups for a struggling Lions secondary. 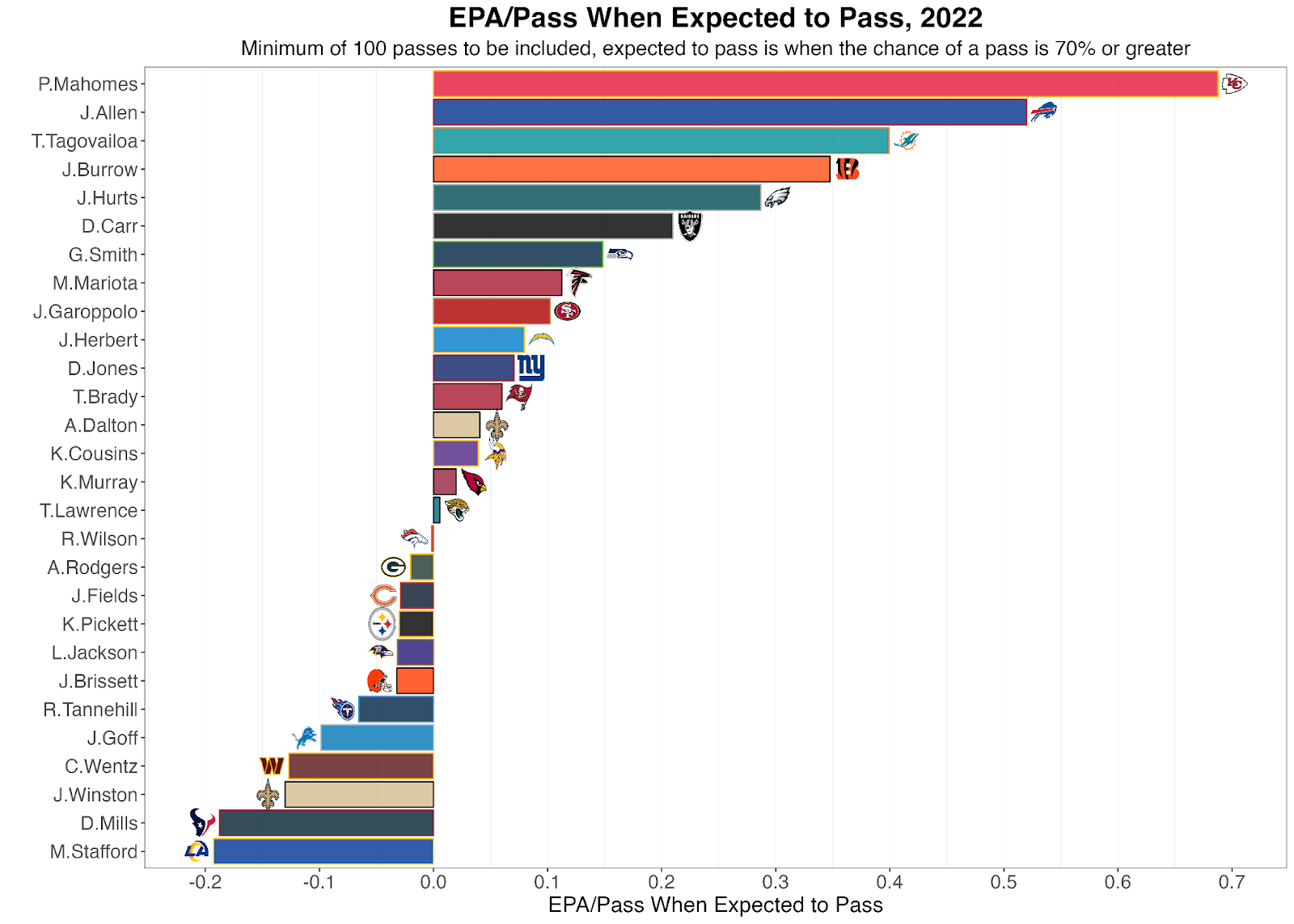 • The Rams Have Been Bad in Expected Pass Situations: With the 29th-ranked pass blocking offensive line and without Odell Beckham Jr. (free agency) and Van Jefferson (injury), Stafford has been the worst quarterback in the NFL when the chance of a pass occurring is 70% of greater. This usually means he is not performing well in 3rd & longs and when the Rams are losing.