• With the second-highest perfectly-covered-play rate in Week 10, the Green Bay Packers' coverage unit got on the same page in their upset of the Dallas Cowboys.

• Packers backup CB Rudy Ford may have had the most impressive Week 10 of any coverage player. Filling in for an injured Eric Stokes after playing only a handful of 2022 coverage snaps,  Ford perfectly covered receivers over 95% of the time and grabbed 2 interceptions.

• Worth noting: the Cowboys ran over 75% man coverage after having above-average zone rates through the first 9 weeks. They underestimated the Packers' young receivers, but Christian Watson in particular beat man coverage many times.

Following our extensive research on coverage in football, and the creation of Perfectly Covered Plays and Adjusted Coverage Rate, we now have recent data to analyze from the tenth week of the NFL season.

As a reminder, we made a slight change in the Perfectly Covered Plays calculation 2 weeks ago to improve the metric. The contents of this change included removing plays with screen passes, and it lowered the perfectly covered play rate 6.6%. Read more about the updated calculation in Week 8’s coverage update.

Let's evaluate how each team and defender performed in coverage in Week 10. 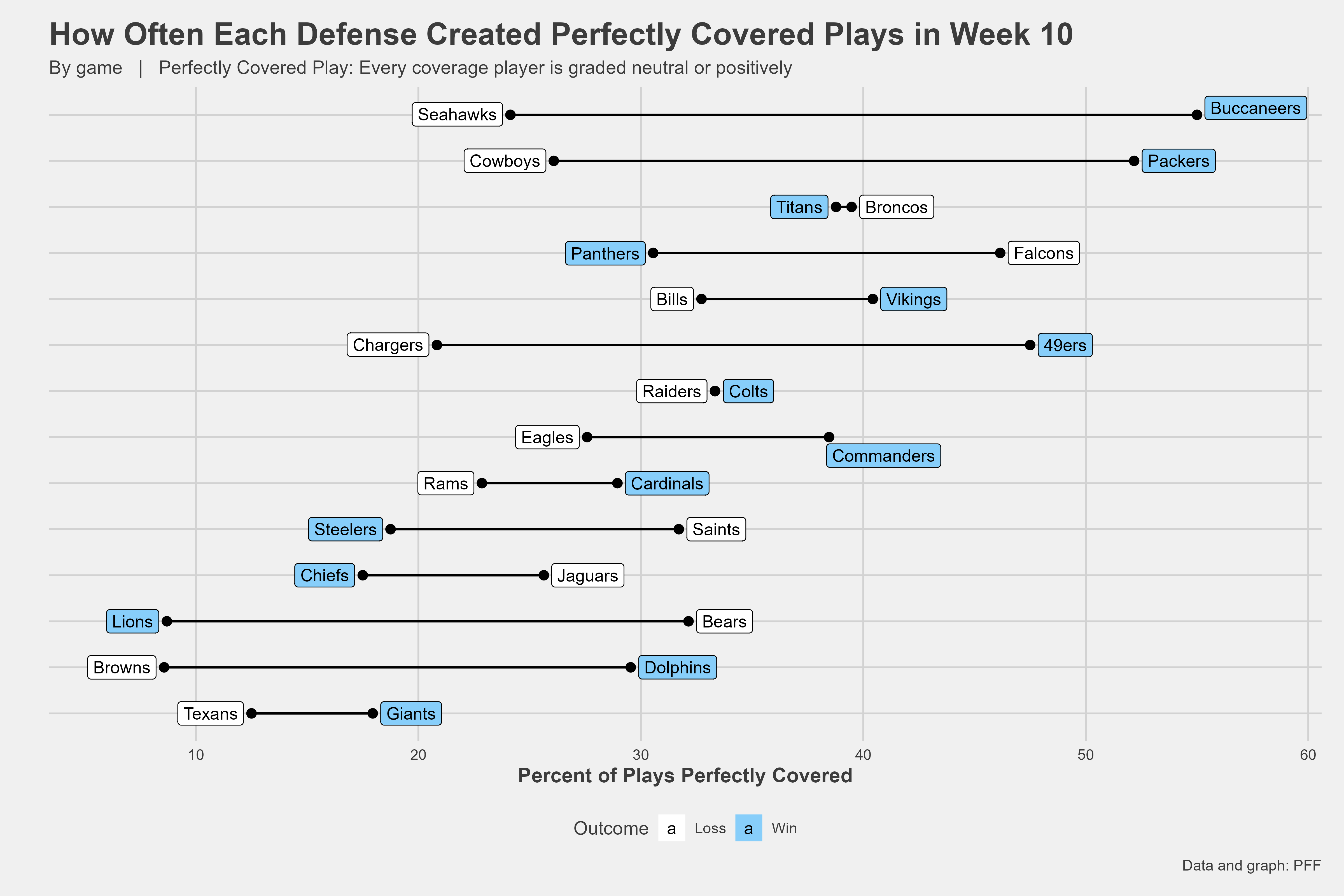 The Tampa Bay Buccaneers’ defense has bounced back nicely in recent weeks, and perfectly covered the highest percent of plays, at just over 55%. The Green Bay Packers' coverage unit also was on the same page this week after struggling during their losing streak.

Yet again, the Cleveland Browns and Detroit Lions coverage units struggled, which is proving to be a common theme throughout the season. They both perfectly covered plays less than 10% of the time in Week 10, and the Browns defense in particular was torched by the Miami Dolphins’ passing attack the entire game.

In Week 10, 9/14 winning teams also had the higher perfectly covered play percentage. The Indianapolis Colts and Las Vegas Raiders actually perfectly covered the exact same percent of plays in their game, but the Colts had 2 more such plays and prevailed under new head coach Jeff Saturday.

Perfectly Covered Plays is not just a defensive stat; preventing such plays is relevant for offenses, too. The Seattle Seahawks’ passing attack struggled in Week 10, so it makes sense that they ended up facing the highest percent of perfectly covered plays. The Tennessee Titans offense finally decided to throw the ball again with Ryan Tannehill back behind center, but their offense faced perfectly covered plays nearly 40% of the time.

Keying in on individual players, we can see who performed the best in coverage in Week 10 in terms of their True Coverage Rate, the percentage of the snaps for which they earn a coverage grade of zero or better. 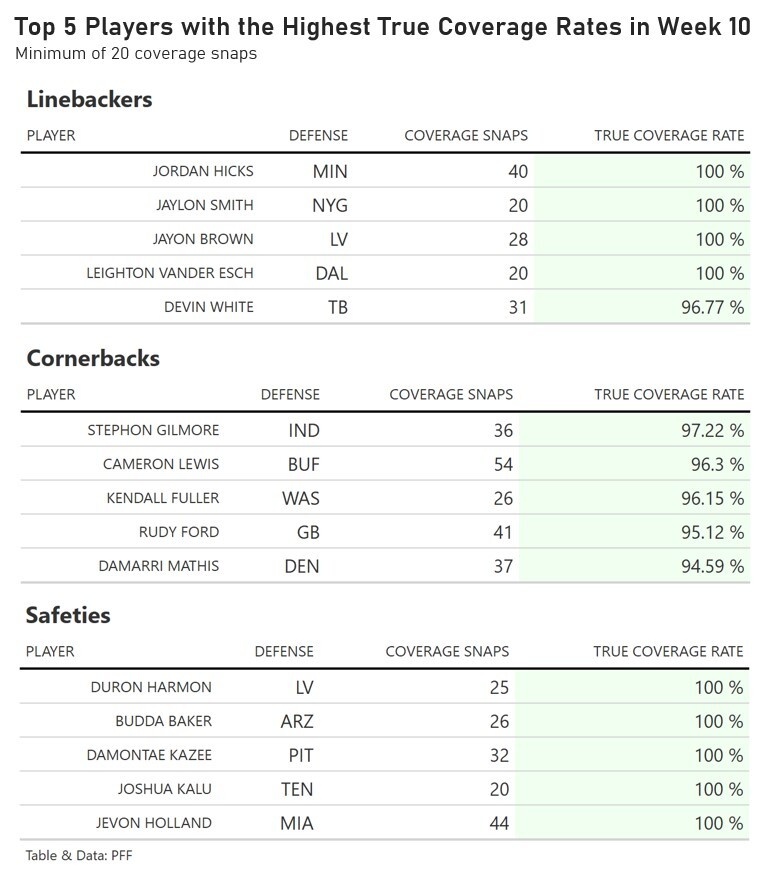 Four linebackers were perfect in coverage in Week 10, including Minnesota Vikings LB Jordan Hicks, who never allowed any of the receivers to get open in the Buffalo Bills’ high-flying offense.

Stephon Gilmore has been stellar for the Colts at locking down receivers this season, and in a big test while lined up against Davante Adams this week, Gilmore succeeded. However, Rudy Ford may have had the most impressive day out of any coverage player. After only playing a small handful of coverage snaps this season, Ford filled in for an injured Eric Stokes and knocked it out of the park, covering receivers over 95% of the time and grabbing two interceptions in the process.

Five safeties locked down receivers on every play this week, including Jevon Holland, who tallied his sixth perfect week of the season, the most out of any coverage player.

See: Rudy Ford above. He filled in massively this week and may have saved the Packers' entire season.

The Miami Dolphins are very thin at cornerback, losing many of their starters to injuries so far. Kader Kohou came in as a third-stringer ahead of the season, but now has the second-most coverage snaps among Dolphins CBs. But Kohl really struggled in Week 10, leaving Donovan Peoples Jones wide open downfield twice and recording a low true coverage rate of 66%.

We can also check in on some 2022 draft picks based on how they performed in coverage. The rookies with the highest True Coverage Rates in Week 10 were:

These 3 rookies all had great days in coverage, but they also all gave up at least one big play by leaving the pass catcher wide open downfield. Quay Walker is back to his dominance in coverage after being ejected last week, but left Dalton Schultz wide open downfield on one play. The Denver Broncos‘ king of pass interference, Damarri Mathis had an amazing day, but he left Nick Westbrook-Ikhine absolutely wide open downfield for an easy touchdown. Chicago Bears safety Jaquan Brisker continued to impress, but he had two plays with significantly low coverage grades against the Lions receivers.

However, some rookies struggled a little this week, with CB Martin Emerson (59.1%), LB Devin Lloyd (75%), and S Kerby Joseph (78.3%) having the lowest true coverage rates in their respective positions. Emerson was no match for Tyreek Hill and Jaylen Waddle, Lloyd struggled against Travis Kelce, and Kerby Joseph gave up big plays to Cole Kmet.

The Buccaneers made the fewest coverage mistakes, in addition to perfectly covering the most plays. Meanwhile, the Lions, Houston Texans, and Cleveland Browns continue to be in the bottom 5 and weekly regulars here. Their coverage players cannot get it together, especially Jeffrey Okudah for the Lions, who left receivers open 45% of the time this week, the most in the NFL.

The Buccaneers moved into the top 3 this week, after having a high perfectly covered play rate against the Seahawks, and the Dolphins took themselves out of the top 3 with a below-average coverage performance against the Browns.

The Lions, Seahawks, and Browns stay put in the bottom 3 after their latest below-average defensive outings.

Some teams’ man and zone rates will vary by opponent, while some will stay steady throughout the season. This week, the league as a whole ran man coverage 30.6% of the time, which brings the cumulative average to 29%, therefore running zone on 71% of plays. We can see how each team’s percentage of running man and zone coverage evolves each week. Here are the teams that ran the most man and zone so far this season:

These rates didn’t change much in Week 10, when each of these teams kept similar game plans. It is worth noting that the Dallas Cowboys ran over 75% man coverage after having above-average zone coverage rates through the first 9 weeks. They underestimated the Packers' young receivers and figured man coverage would be successful, but Christian Watson in particular beat man coverage many times.

Also check out weekly Man and Zone Analysis articles coming out soon for more in-depth analyses on this and predictions based on Week 11 matchups.