We went 1-1 last week and are now 26-22 on the year and 120-104-10 overall. There wasn’t much to pick from last week, so we went with a team total. We do the same this week, picking on a defense that is probably overrated after their wild-card performance. We also offer a pick against the point spread.

Point (Eric Eager): The Tennessee defense is being praised for holding the New England Patriots to 13 points last week in Foxboro, but let’s not be fooled — they are not a good defensive team. They are 27th in our pass-rushing grades, and only one player — Harold Landry III — has generated more than 35 total pressures this season. Their secondary got healthier last week, but at times, they were victimized even by the aging and generally ineffective Benjamin Watson, who caught three of his four targets and dropped another one. In their last real regular-season game, Jared Cook ran up and down the field on them to the tune of 84 yards and two touchdowns on four targets. The middle of the field will likely be plenty open for Lamar Jackson to target Mark Andrews (2.89 yards per route run, second to only George Kittle) for the type of chunk plays they’ll need to cover this number.

While the Titans have a good rushing defense (third-best by our grades), Lamar Jackson and his stable of running backs present a challenge unlike any they’ve faced this season with what is generally the league's most dynamic and unique offensive scheme. The Ravens' offensive line is the most valuable in the NFL this year in terms of PFF WAR, so efficiency should not be an issue for Jackson on the Ravens' side of the ball.

Pace, on the other hand, is a concern, as the Titans have had some success running the ball during the latter part of the season. However, they have been an explosive team in both the run game and the passing game, averaging 0.12 expected points added since Ryan Tannehill took over, including 0.25 EPA through the air, both of which are second to only Baltimore. The Titans will move the football enough to make the Ravens score in this one, and score they will. 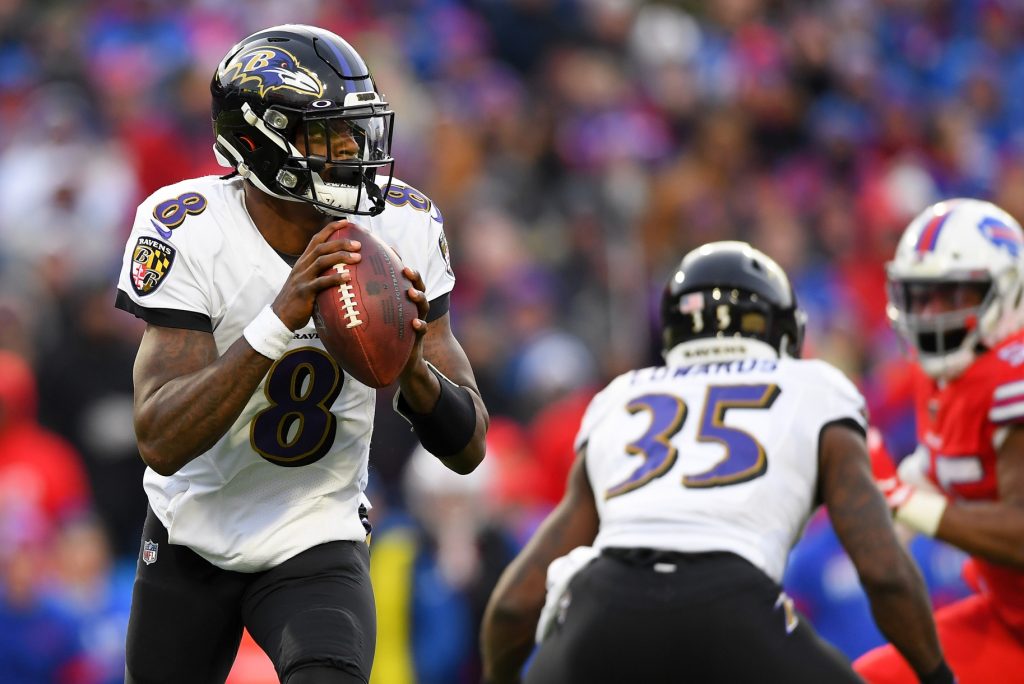 Counterpoint (George Chahrouri): The worry here is the number and the opposition. The Titans' offense ranks second to the Ravens in expected points added per pass play since Ryan Tannehill took over at quarterback, but this is Ryan Tannehill we are talking about — he doesn’t exactly have the longest track record of excellence.

Tannehill played by far his worst game of the season last week in New England, which resulted in only 14 offensive points for the Titans. The Ravens might be able to slow the Titans down so much that they won’t need to try and score more than 28 points to win this game and move on to the AFC Championship. Since taking over at quarterback, Tannehill has taken a sack on 27.7% of his pressured dropbacks — the second-highest mark in the NFL and nearly double the league average. To reiterate, one of every four times the defense puts pressure on Tannehill, he goes down for a sack. The Ravens pressured opposing quarterbacks on 41% of dropbacks since acquiring Marcus Peters in Week 7, the second-highest behind the Steelers.

The weather forecast for Saturday night calls for a little rain and 15 MPH winds, which might present the right climate for the Ravens to run the ball even more than they already do. This doesn’t mean that they won’t score — the Ravens' expected points added per run play ranked first by a mile and would have ranked 13th among passing offenses and ahead of four playoff teams — but it does mean that they might take a little longer to score. As you can see, I’m struggling to make a coherent argument for the Ravens scoring 28 or fewer points. Big truss to Eric and his reasoning.