PFF Data Study: How the Ravens' offense takes the league by storm

Going into the season, we weren’t necessarily high on the Ravens. We projected them with a mere 14.5% chance to win their division. We had some good reasons for that: Their defense played a strong 2018 campaign (finishing fifth in our PFF WAR metric) and added Earl Thomas over the offseason, but defense is generally more volatile than offense. Their offense finished 2018 as only the 18th-best unit per our PFF WAR metric, and Lamar Jackson had the usual struggles of a rookie, finishing the 2018 regular season with a 58.5 overall grade.

Given that offense carries over better from a season to the next, a model would expect the defense to regress a bit and had a hard time envisioning a huge jump from the offense, even though a second-year leap from Jackson was of course in play. While the defensive performance behaved as expected, we were obviously wrong on the offense. The talented signal-caller made a huge second-year leap, currently ranking second to only Russell Wilson among quarterbacks with a 90.1 overall grade, and John Harbaugh and Greg Roman created an offensive scheme perfectly tailored to his strengths. Being occasionally wrong when trying to project future events isn’t the end of the world, but it’s of course a good reason to look at how the Ravens' offense manages to play at a level nobody expected them to prior to the season.

The Ravens' offense is the best of the league, but unlike other top offenses

The Ravens' offense currently trumps the league as the best offense with 0.16 expected points added per play.

Their offensive players also grade out well in our grading system, as reflected by the Ravens’ offense ranking fifth in our PFF WAR metric (with the conclusion of week 10). Thus, they are outperforming their own defense, the unit we perceived to be stronger prior to the season, which ranks 14th in the league per the same metric. When the fifth-best graded unit gets the best results on the field by, we tend to think of this as a sign of how great of a job the coaching staff is doing, as they have embraced the unique skill set of Jackson and have created a league-best offense we haven’t seen in recent years.

What makes them unique is the relatively low total amount of value-added via the air. With the conclusion of Week 11, the Ravens have added 89 expected points through pass attempts. This is by no means a bad total, as it ranks eighth in the league and shows the rapid growth of Jackson in the passing game. It's also reflected by Jackson’s ranking in raw PFF passing grade per play, in which he ranks second on all dropbacks and eighth on pass attempts.

However, in recent years, a team with the ninth highest total value added through the air had no business in representing the best offense the league, as nine of 13 of the league’s best offenses from 2006 to 2018 also added the most value through the air and the other four instances ranked second or third. Those 13 teams averaged roughly 250 total EPA through pass attempts, a figure the Ravens will probably fall short of by roughly 100 points. We can’t point out often enough that this is not at all a reason to downgrade them, but it goes to show how unique their approach is. 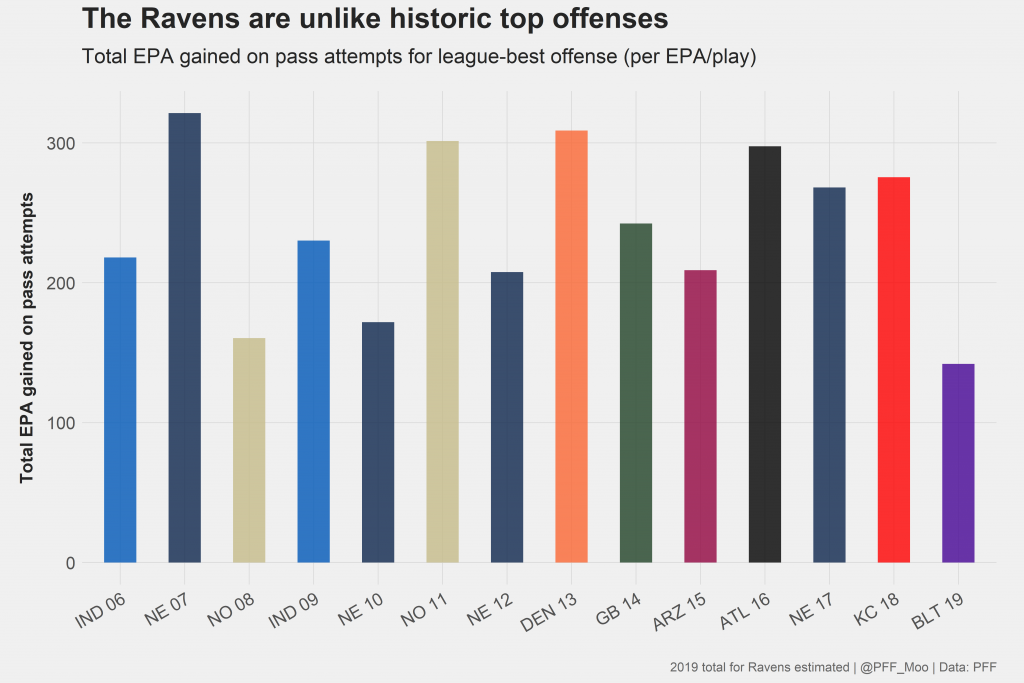