• Parlay Seahawks alt spread -7.5 + o18.5 team total at Bucs: Seattle a neutral-field underdog because of QB reputations. Yet Tom Brady has fallen off in an offense with fundamental issues, as Geno Smith leads legit top 5 unit.

• Brady is seeing perfect coverage nearly half the time he drops back to pass: And despite his relatively remarkable play under such circumstances, the issues won't disappear overnight.

• Unlike Brady, Smith has the luxury of one of the NFL's most efficient run games: And rookie Kenneth Walker poses a problem for previously elite Tampa run ‘D' that's fallen off a cliff since Week 3 (5th-worst Rush EPA, 9th-most YPC).

It is already Week 10 of the NFL season, but there is still much debate evaluating the best teams and how to price in priors from previous years.

Seattle has thoroughly outperformed the Bucs this year, but likely because of Geno Smith‘s previous failed starting stints and because Tom Brady is the opposing QB, the Seahawks are underdogs in a neutral-field game. But Brady has taken a step back, while the Bucs have clear fundamental offensive issues that won’t magically disappear. Smith is leading a legitimately good offense, and a young team has improved as their rookies have, naturally, improved.

There is a clear gap this season in team efficiency between the Seahawks and Buccaneers, especially on the offensive side of the ball. 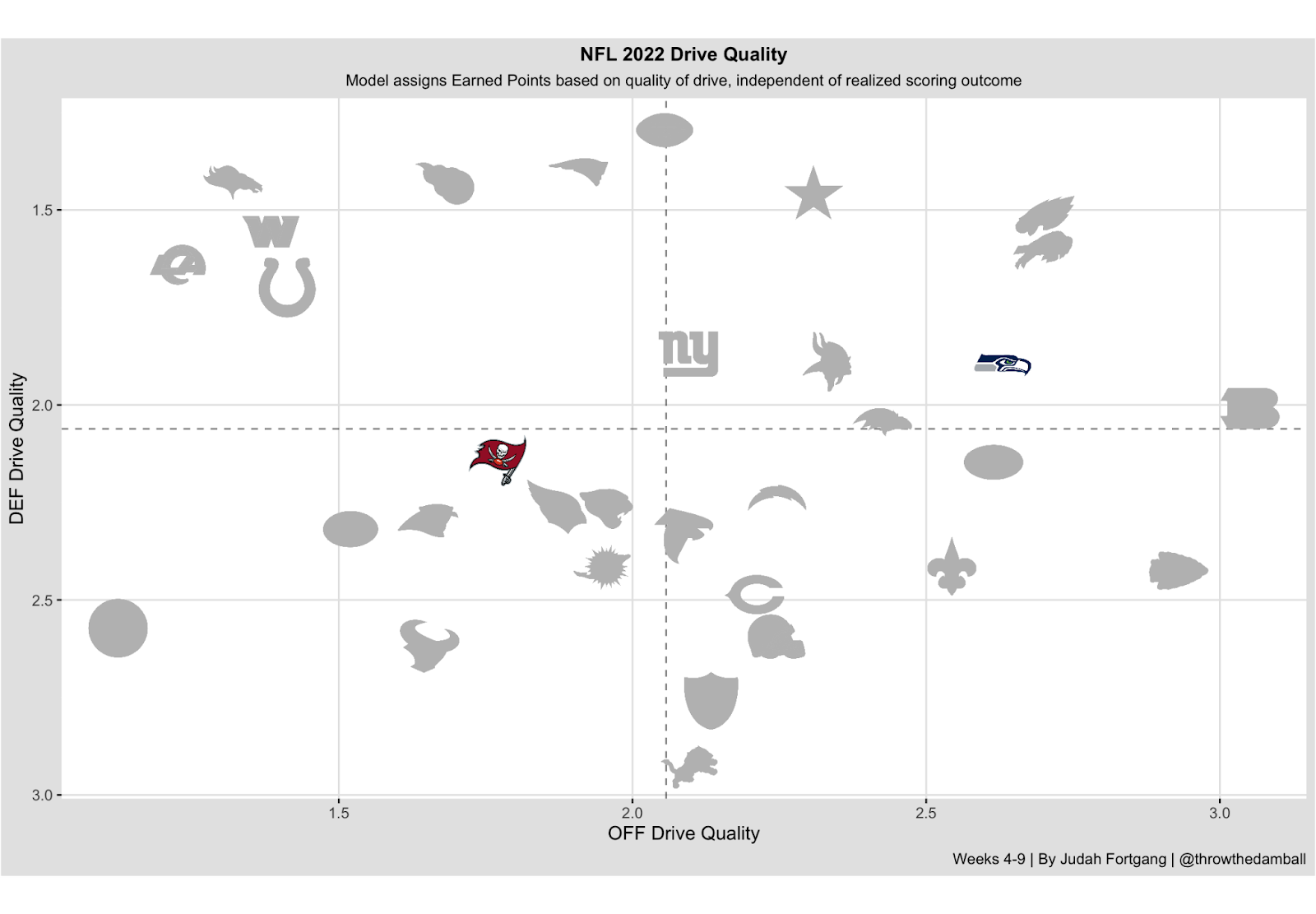 • The Seahawks have legitimately played to their record, moving the ball at the NFL's 6th-highest rate, while stopping teams from doing so at the 14th-highest rate.

• Tampa Bay has done well defensively over the course of the season (No. 8 in Drive Quality) but have really struggled to move the ball (9th-worst).

Additional metrics that illustrate the offensive disparities between Seattle and Tampa Bay:

You get the idea — clearly the Seahawks have a far superior offense no matter what metric we use. But Seattle's case is even more compelling when considering what the teams have done in recent weeks. 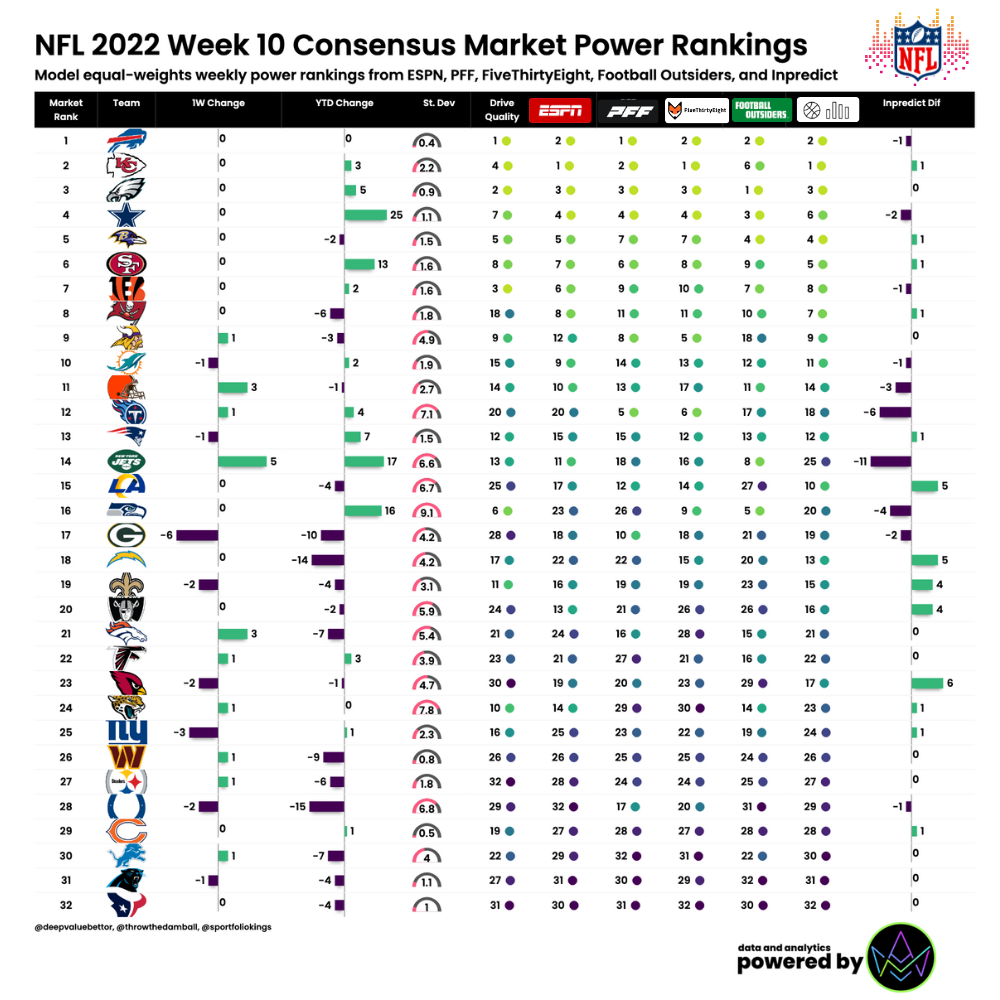 • Over the past six weeks, teams trending in opposite directions: Seattle has improved on both offense and defense, while Tampa Bay’s defense is getting worse — especially against the run.

This should not be discounted as an example of endpoint bias and using a smaller sample size.

• Consider that Seattle has relied on the emergence of younger players: It should be expected that rookies, including Charles Cross, Abraham Lucas, Coby Bryant and Tariq Woolen, would struggle early. Rookies get better as the season progresses, making their progress likely more sticky later than early in the season.

• Also consider the Bucs have an older team with no rookies starting: Leaving them on the opposite end of the spectrum. Mike Evans, Chris Godwin, and Julio Jones aren’t getting better at this stage of their career. If anything as time rolls along — and as we continue to see play out — those guys are just getting more and more banged up.

Essentially, taking a full-season view of these teams suggests that Seattle is superior, and accounting for how to price in recent weeks, the Seahawks only become more attractive. 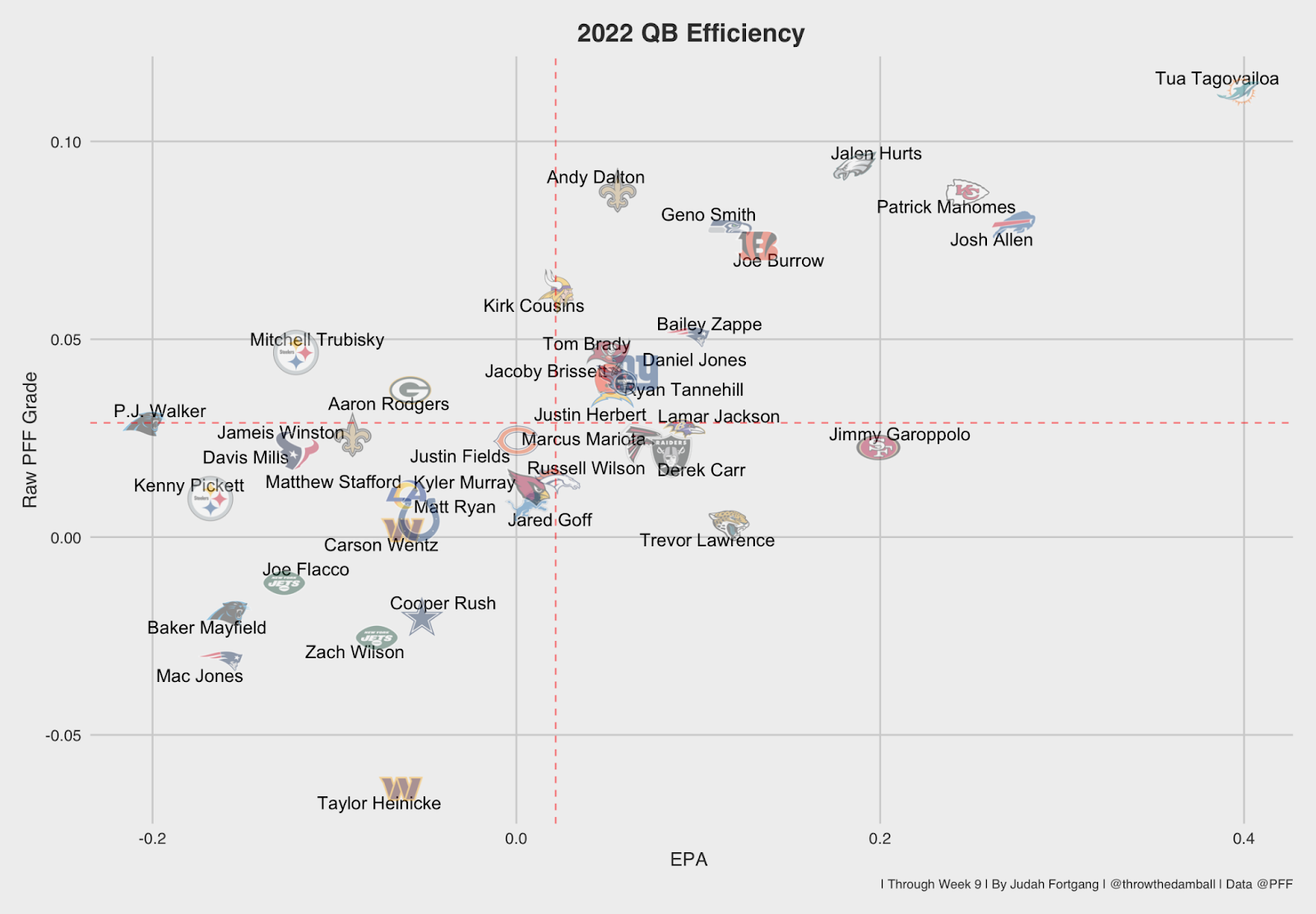 The market has still yet to meaningfully downgrade the Bucs and upgrade the Seahawks, resulting in Tampa as 2.5-point favorites, likely a function of the quarterbacks.

But should we really be assuming Brady is more likely to produce than Smith?

In terms of total production — not merely the product of play in unstable metrics — Smith has out-produced Brady. Below are a few stable metrics in which Smith is well out performing Brady.

And while Brady is not playing up to his previous standards, his supporting cast is certainly not helping out.

It is well-documented by now that the Bucs have a historically bad run defense, with an EPA almost twice as bad as the NFL’s worst offense this year.

But less-documented are the issues in the passing game before Brady even throws the ball. 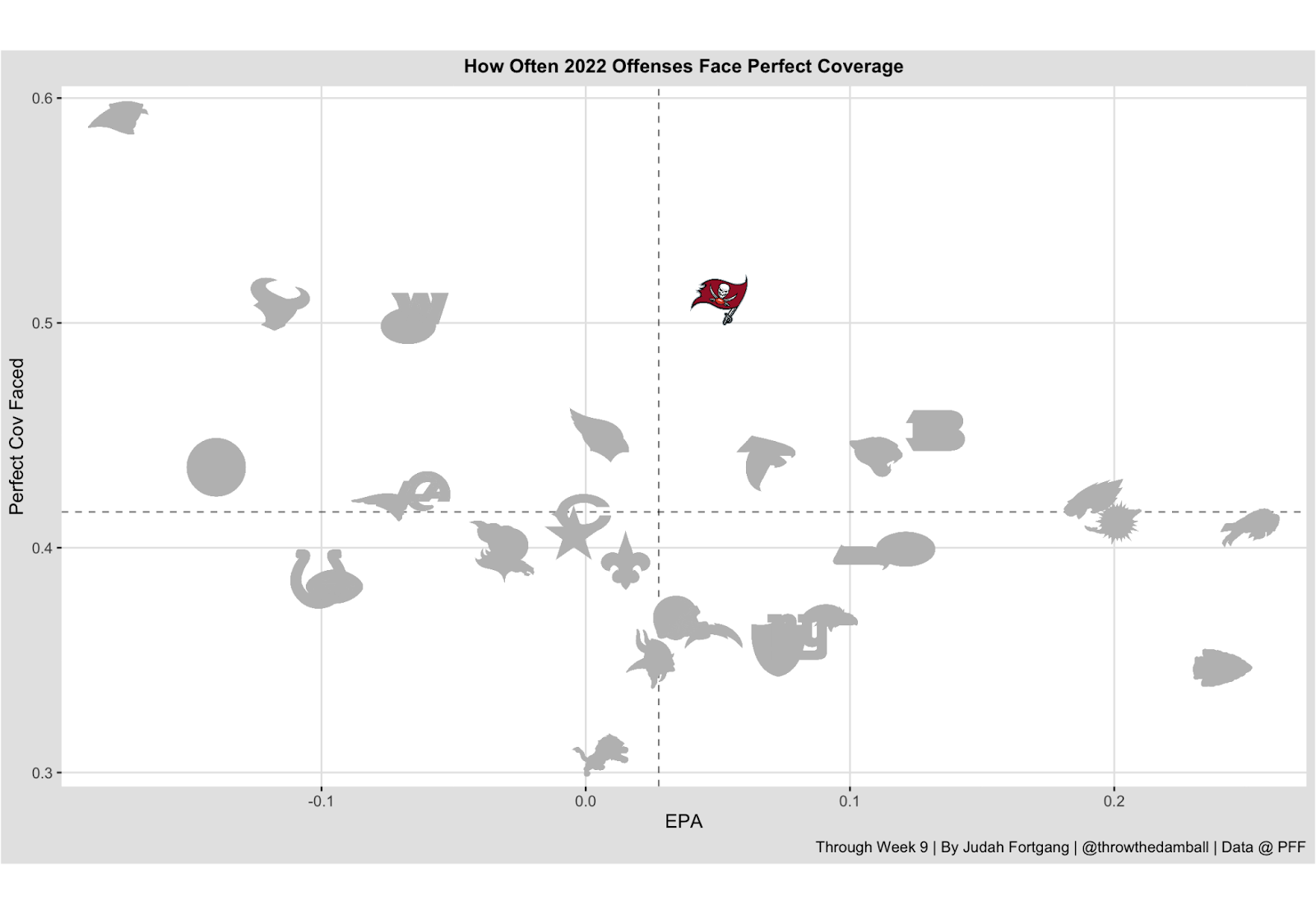 And the base rates on such plays are revealing: the average EPA on a perfectly covered play is -0.30 (a bit worse than the Bucs' run game).

• Despite Brady’s remarkable performance on such plays: It is both unstable and indicative of fundamental offensive issues: a scheme that can’t get guys open and receivers who cannot separate. No QB can consistently succeed under such circumstances — and these issues do not disappear overnight.

Why the Alt Line?

• We refute the idea these are the Bucs of old, but that's how they're being priced by the market: And our handicap is two-sided: If the Seahawks legitimately have a top-5 offense — but are being priced at a discount because of Geno Smith’s past production — then we have perhaps the biggest misprice of any game this season.

• If we've identified the market pricing and team fundamentals correctly: I want to push the line out as much as possible to reflect the true disparities while also getting +400 odds, and not even money, for being right. (Of course, if SEA is up by a few scores late and you’re afraid of a backdoor cover, the +400 gives leeway to hedge). 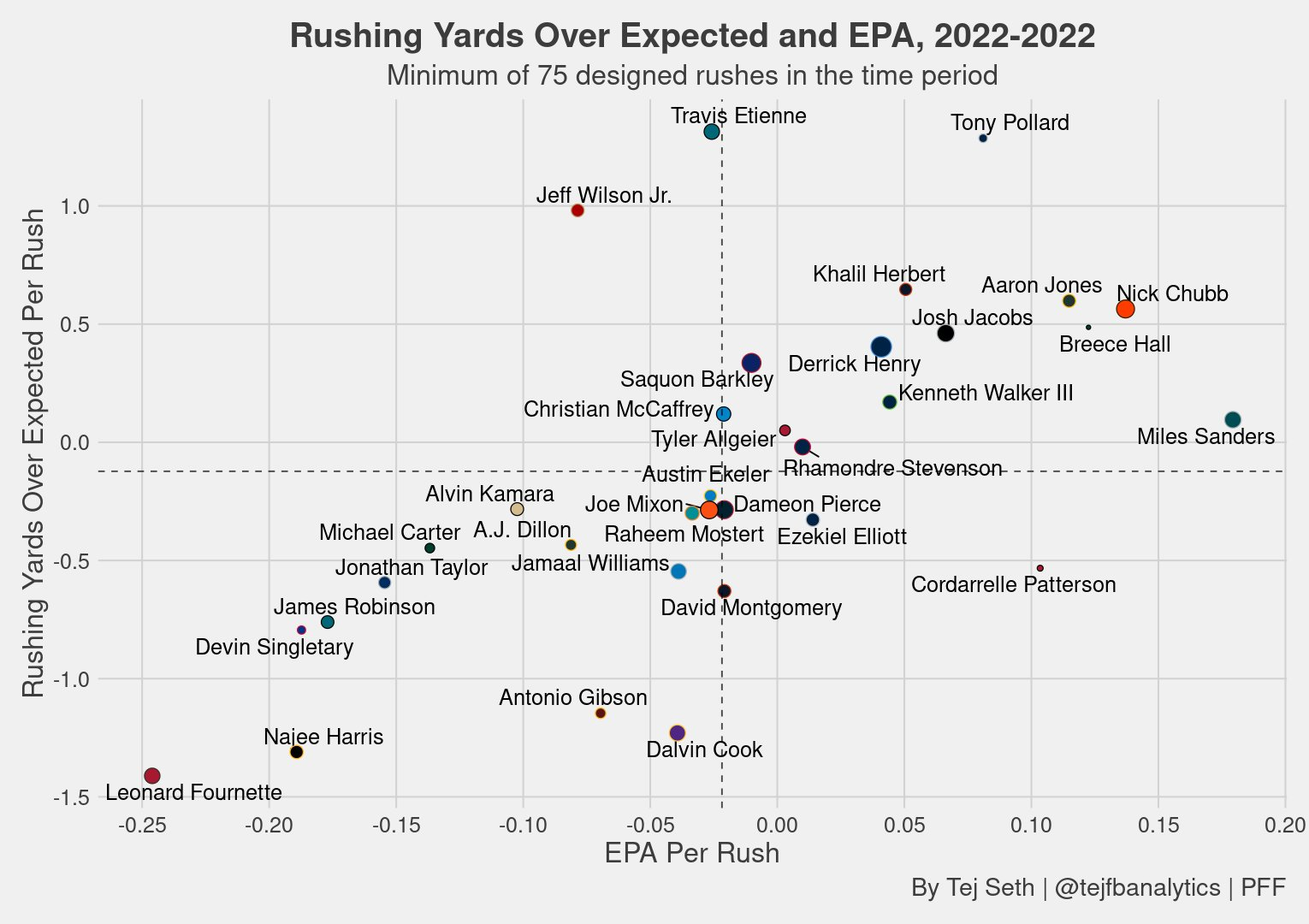 • This could pose an issue against Kenneth Walker and the Seahawks: Who have one of the NFL's most efficient run games this season. If they get out to a lead, the Seahawks can rely on the run game to continue scoring and keep Brady on the sideline.