• Minnesota's zone-heavy defense collapsed to the Cowboys in Week 11 (0.7 EPA/play in zone). Fortunately on Thanksgiving, Minnesota now hosts the Patriots, who have NFL's third-lowest EPA vs zone.

• After brief week away, the Chiefs again top the league in most man coverage faced (41.6%).

• We'll see ultimately Sunday how much power the Chiefs have on the opposing defense’s gameplan when they take on the Rams, who run league-high 90% zone. 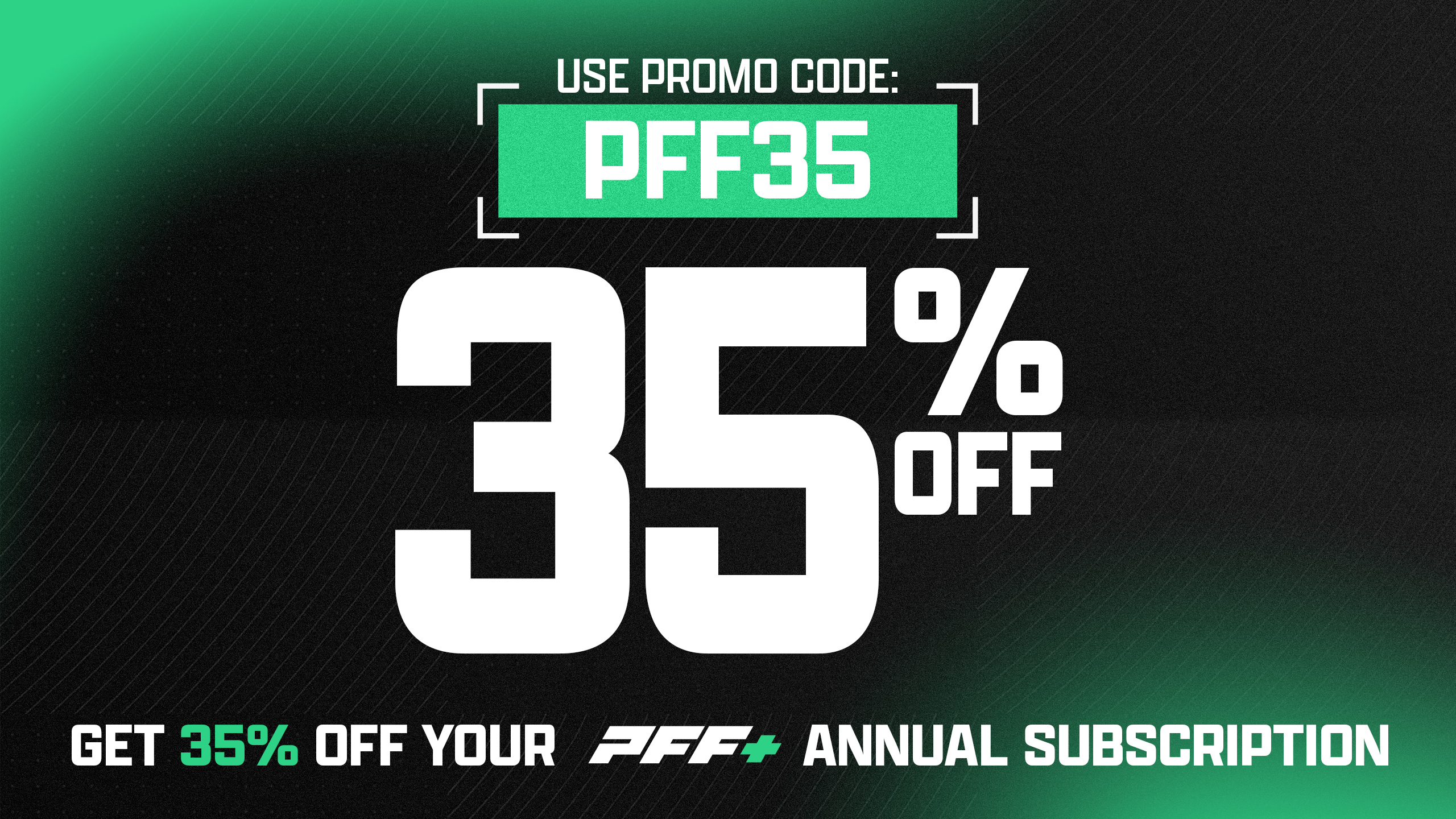 Playing man and zone coverage could depend on the strengths and weaknesses of the opponent the team faces. In Week 11, the league as a whole ran man coverage 30.1% of the time, down slightly from 30.6% last week. Highlighted in this week’s Coverage Update article, here are the teams that ran the most man and zone coverage in Week 11:

The Pittsburgh Steelers and New York Giants both chose to run more than 60% man coverage in their games against the Cincinnati Bengals and Detroit Lions, respectively. They are regularly some of the most man-heavy defenses, along with the Lions. However, the Giants’ man coverage was much more effective than the Lions’ in their game in terms of EPA, but Detroit was able to get the win.

The Baltimore Ravens ran the most zone coverage in Week 11 against the Carolina Panthers, and it was highly successful, as they held Carolina to -0.45 EPA per play while facing zone. The Panthers’ offense has faced mostly zone this season and has struggled to move the ball, so the Ravens continued the trend.

Some teams’ man and zone rates will vary by opponent, while some will stay steady throughout the season. So far, the league as a whole ran man coverage 29% of the time, therefore running zone on 71% of plays. From 2019-2021, the average man coverage percent was 33.9%, so the league is running about 5% more zone coverage this season. Below, we can see how each team’s percentage of running man and zone coverage evolves each week. 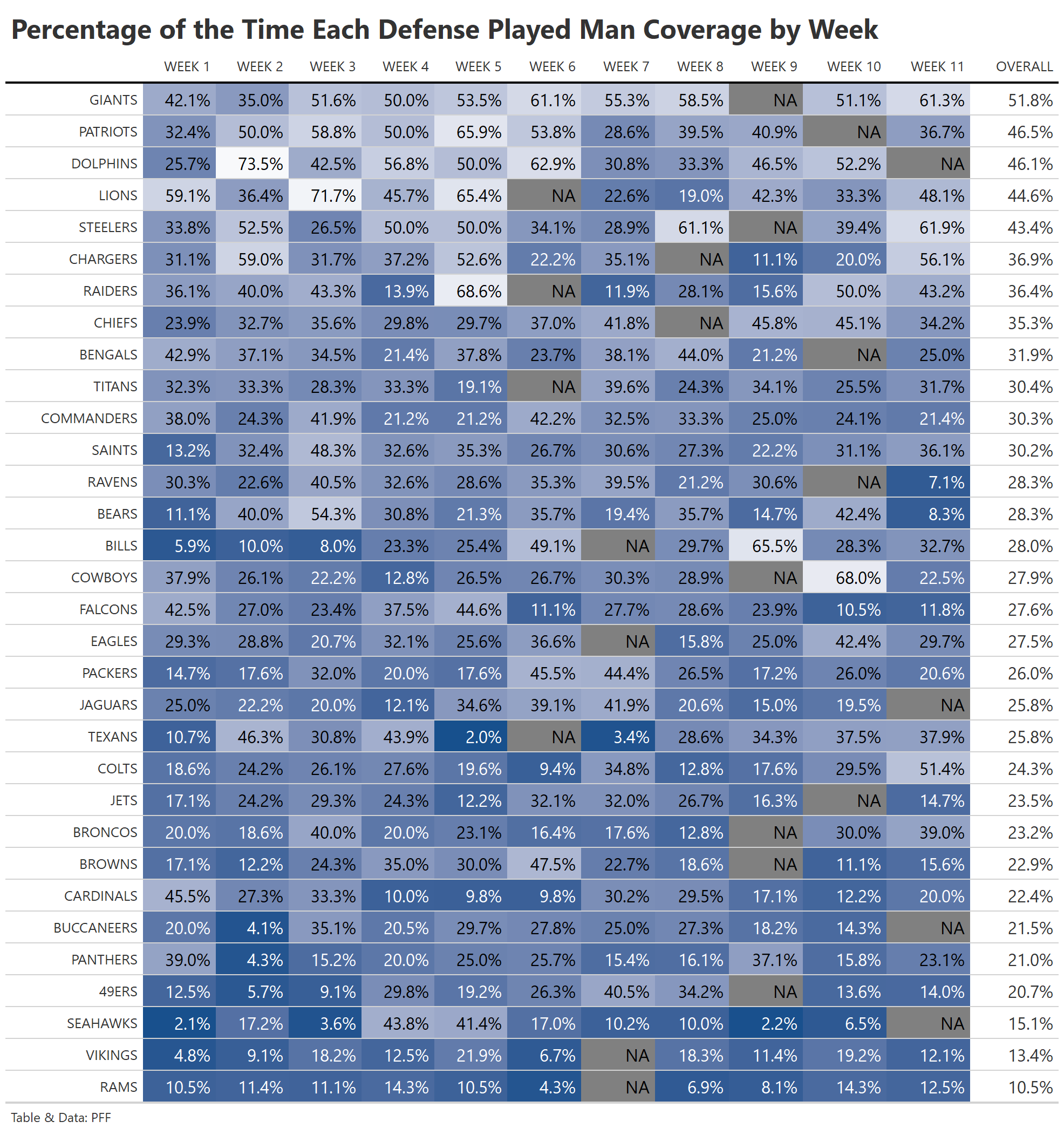 We’ve talked about how the Los Angeles Rams defense doesn’t vary their man and zone coverage rates (as they’ve stuck to running around 90% zone coverage in every game), but we haven’t dived deep into the Vikings here yet. The Minnesota Vikings have had the same coverage gameplan as the Rams, except they’ve been winning games. After their collapse against the Dallas Cowboys (allowing 0.7 EPA per play in zone), it might be time to wonder if they’ll try running some more man coverage to see if that works.

The Chicago Bears‘ man and zone coverage rates have been all over the place this season. They’ve tried just about every combination, but none have been successful (allowing over 0.15 EPA per play with both). Like the Texans, their lack of defensive success is becoming more about their poor play than the weekly scheme.

After poorly running a ginormous amount of man coverage last week, Dan Quinn went back to his normal gameplan by having the Cowboys play much more zone coverage against the Vikings. It was ultimately a great bounce-back game for the Cowboys defense. 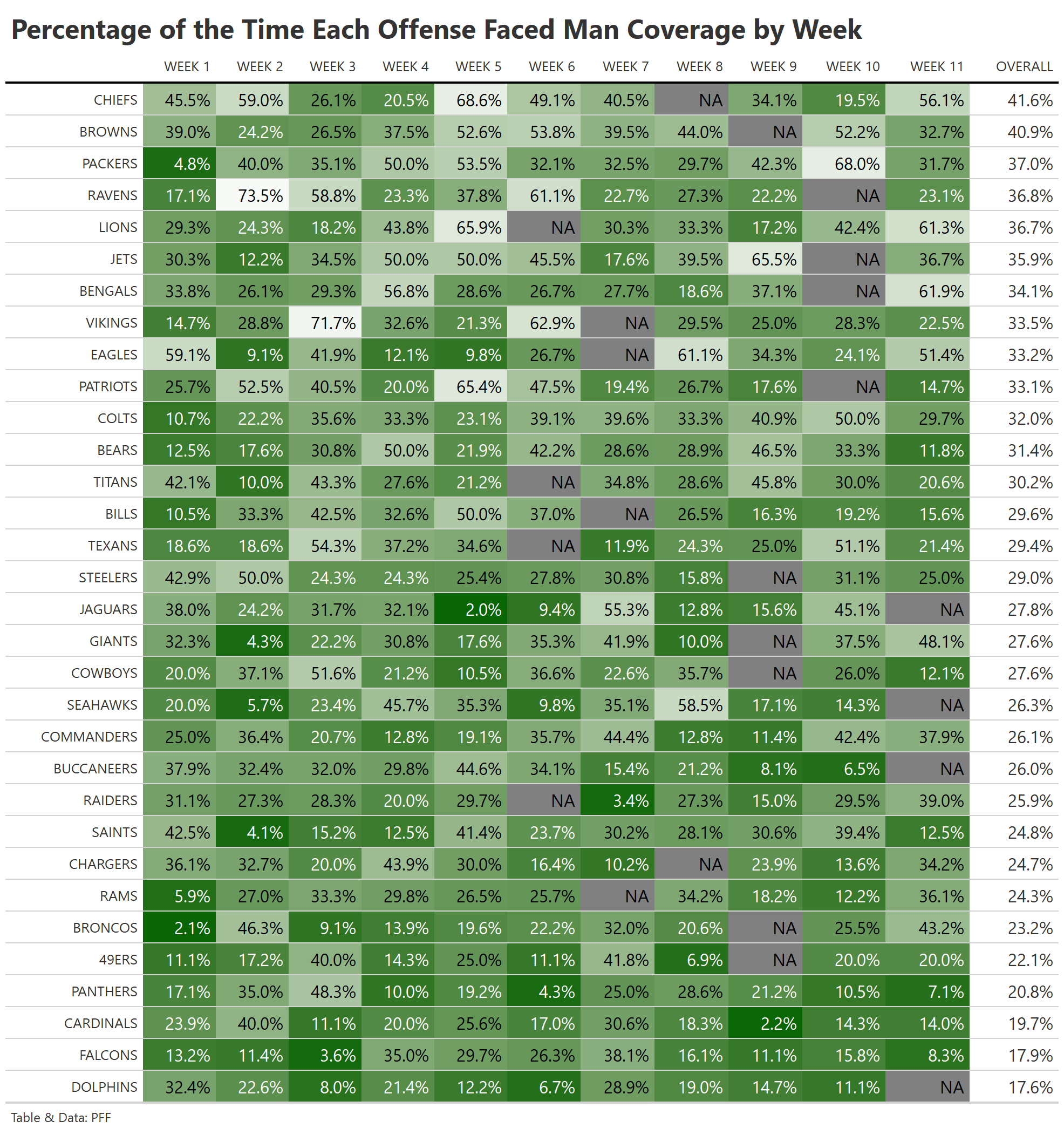 Against the Philadelphia Eagles, the Indianapolis Colts’ coverage unit didn’t copy the Washington Commanders’ winning gameplan and instead ran man and zone each 50% of the time. However, this gave the Eagles the most trouble this season, as they averaged -0.18 EPA against man coverage and -0.29 EPA against zone. Aside from the 4th quarter, the Eagles were shut down, and are proving that they are not the unstoppable force they were in the beginning of the season.

The Bengals have faced more man coverage in their past 2 games, which could be an adjustment by opposing defenses given that Ja’Marr Chase continues to be out with a hip injury.

After a brief week in second, the Kansas City Chiefs once again top the list in terms of facing the most man coverage this season, courtesy of the Los Angeles Chargers running 56% man coverage against them this week. The Chiefs do have the highest EPA per play against zone (0.23), but their EPA per play against man is even higher (0.35), which is good for second in the league behind the Miami Dolphins. It’s hard to understand how defenses are consistently underestimating the Chiefs’ pass catchers without Tyreek Hill.

Week 12 Predictions and Matchups to Watch

This week, we will ultimately see how much power the Chiefs have on the opposing defense’s gameplan when they take on the Rams. The fact that the Rams refuse to change their coverage gameplan against any opponent by consistently running 90% zone coverage each game may actually be to their benefit this week. Could they be the first team to succeed? Or will they be led into the trap and run a high rate of man coverage against the Chiefs?

The New York Jets offense currently has the worst EPA per play against man coverage. In Week 12, they take on the Bears, who run an average amount of man coverage. Will the Bears opt for even more man coverage this week, and will new starting quarterback Mike White be able to turn the Jets’ offense around?