• The Washington Commanders proved the Philadelphia Eagles are beatable — mostly with their zone defense. While facing about 75%, the Eagles had their lowest average EPA per play against zone (-0.6).

• Teams have finally started listening and are gradually running less man coverage against the Kansas City Chiefs, as the Cleveland Browns’ offense finally overtakes them for facing the most man coverage this season.

• The Dallas Cowboys visit the Minnesota Vikings, who have struggled more often than not against man coverage, but it is hard imagining Dan Quinn will be as drastic in his play calling after underestimating the Packers in Week 10.

Each week, we will detail how teams varied in the use of man and zone coverage, and how it may have differed from their previous week. We will also highlight key matchups and make predictions for some team’s man and zone rates for next week.

Playing man and zone coverage could depend on the strengths and weaknesses of the opponent the team faces. In Week 10, the league as a whole ran man coverage 30.6% of the time, up significantly from 25.6% the week prior. Highlighted in this week’s Coverage Update, here are the teams that ran the most man and zone coverage in Week 10:

Lots of man coverage was run this week, 5% more than last week on average. Almost every team ran man coverage higher than the league average, except the regular zone-heavy defenses. The Cowboys are the big outlier here, running man coverage a gigantic 76% of the time in their game against the Green Bay Packers. That’s the highest percentage this season, but it ultimately didn’t pay off for the Cowboys.

Some teams’ man and zone rates will vary by opponent, while some will stay steady throughout the season. So far, the league as a whole ran man coverage 29% of the time, therefore running zone on 71% of plays. From 2019-2021, the average man coverage percent was 33.9%, so the league is running about 5% more zone coverage this season. Below, we can see how each team’s percentage of running man and zone coverage evolves each week. 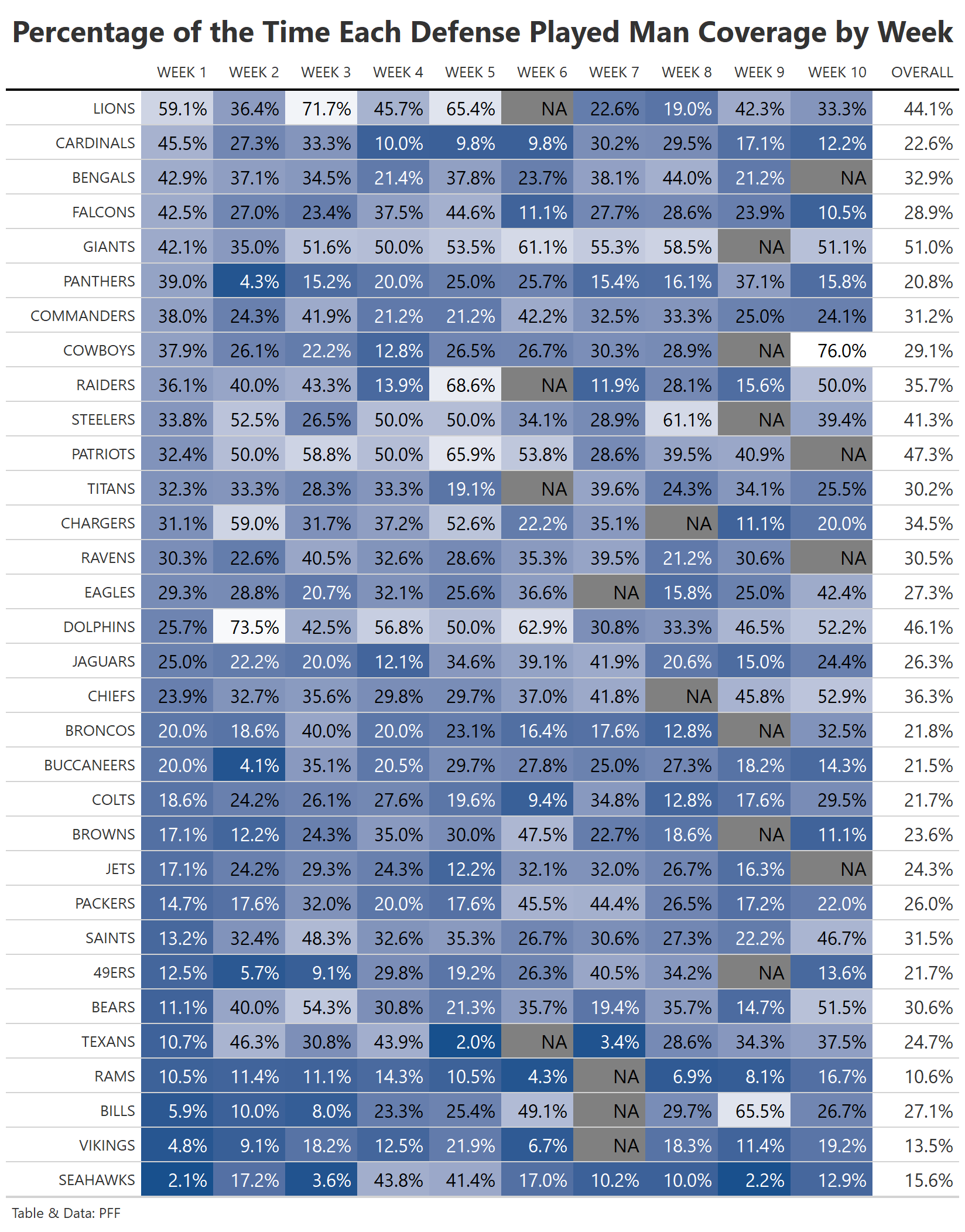 As mentioned above, the Cowboys played the most man of any team the entire season, after playing an average amount of man prior to Week 10. Defensive coordinator Dan Quinn completely changed the gameplan — and underestimated the Packers’ young receiving group — as Christian Watson consistently beat the 1-on-1 coverage to score 3 touchdowns on the day.

The New York Giants‘ defense has been very predictable in recent weeks, using man and zone coverage each about 50% of the time. They haven’t really tailored their gameplan to their specific opponent, and it likely won’t change next week when they take on the Detroit Lions, an offense that’s no stranger to seeing high man-coverage rates.

The Houston Texans have been an interesting defense in terms of their varying man and zone rates. Their man coverage is the least efficient in the NFL, allowing an average of 0.43 EPA, and their zone coverage isn’t much better. It’s been a big learning curve for their young coverage unit, but their lack of defensive success is becoming more about their weak play than the scheme. 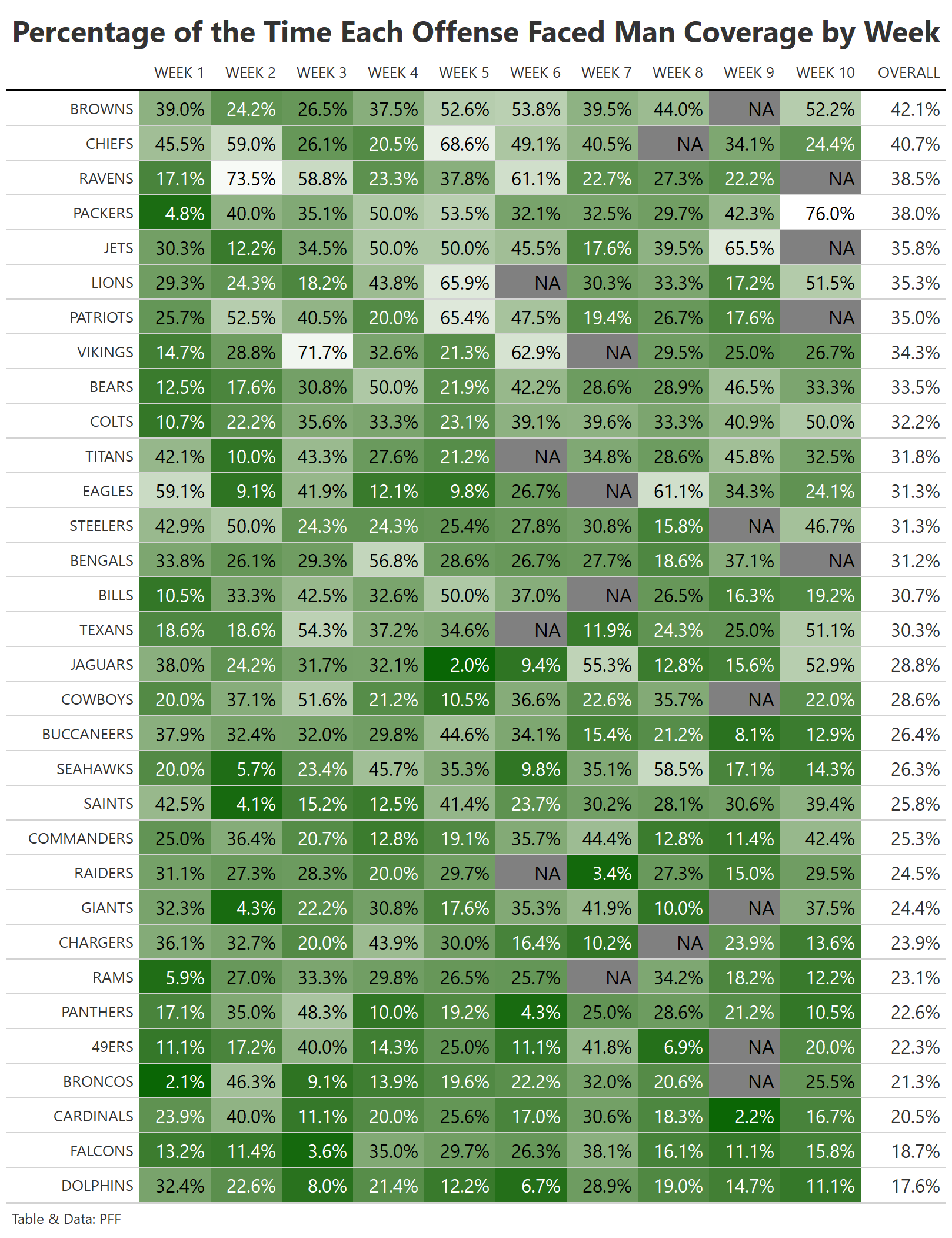 Teams have finally started listening and are gradually running less man coverage against the Chiefs, as the Browns’ offense finally overtakes the Chiefs for facing the most man coverage this season. The Packers are another team whose wide receiver corps is being underestimated, which is no surprise, but Christian Watson proved otherwise this week.

The Seattle Seahawks did exactly what they thought they would do this past week – run mostly zone coverage against the Buccaneers, a team that had been struggling against zone in recent weeks. However, the Tampa Bay Buccaneers‘ offense bounced back and had their best game against zone since Week 5, and their second best week overall.

The Washington Commanders proved Monday night the Philadelphia Eagles are beatable, and did it mostly with their zone defense. While facing about 75% zone coverage, the Eagles had their lowest average EPA per play against zone of the entire season, at -0.6. The Eagles did have one of their best games against man coverage, but it was the Commanders' strong zone defense that did the trick.

Week 11 Predictions and Matchups to Watch

The second battle of man coverage will happen this week, as the man-heavy defenses of the Lions and Giants play against each other Sunday. Expect each offense to face over 50% man coverage, but the Giants have been the stronger team against man by a large amount (especially in recent weeks), while the Lions offense has been declining.

It would be incredibly surprising if the Cowboys run a man coverage percent anywhere near the 75% they ran against the Packers. This week, they’ll face the Minnesota Vikings, who have struggled more often than not against man coverage, but it is hard imagining that Dan Quinn will be as drastic in his play calling after Week 10’s mistakes.

The Tennessee Titans haven't really tailored their defensive gameplan to their specific opponent, and it’s really worked for them. They’ve consistently run about 30% man coverage, but they take on the Packers this week, a team that’s faced a great deal of man coverage in recent weeks. However, after the Packers' success against man this past week, don’t expect the Titans to run nearly as much man coverage as the Cowboys.