Preseason Week 3 serves as the dress rehearsal for most NFL teams, and we’ll see many starters play a full half (or more) of football. There are six games on the schedule for Saturday — three in the late afternoon and three in the early evening. That makes for a reasonable fantasy football slate for DFS players. 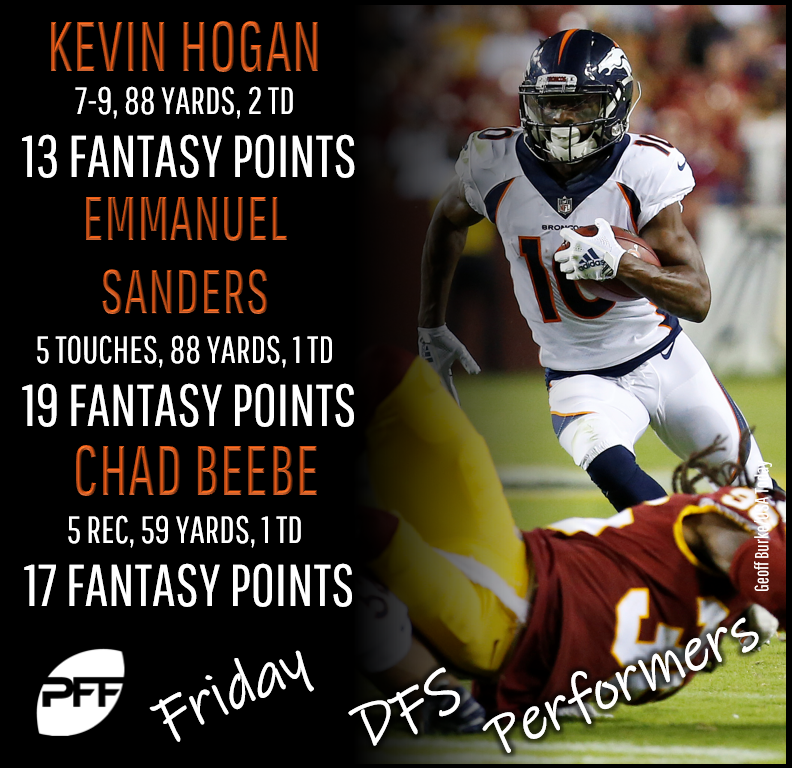 This piece will go over some of the players I’m thinking about for all games on Saturday’s games.

Philip Rivers is expected to play most of the first half, which makes him a worthwhile target for Saturday’s slate. Rivers has only attempted seven passes this preseason, but he’s been sharp, completing six of them for 62 yards.

Andrew Luck is another big name who is expected to play most of the first half. In two preseason games this year, Luck is 12-of-21 for 114 yards, no touchdowns, and one interception. That’s not stellar, but a full half of Luck is hard to pass up on a six-game preseason slate.

Jimmy Garoppolo should play the full first half against the Colts. He has been quite productive in his two games, going 13-of-18 for 170 yards and a score against no interceptions. He’ll undoubtedly be one of the most popular quarterbacks on the slate.

Melvin Gordon has posted a line of 15-51-1 in two preseason games, including 10-35-1 in preseason Week 2. Gordon should play the first half on Saturday along with the rest of the Chargers starters. Considering he saw double-digit touches last week, we can consider him a lock for another double-digit touch game on Saturday. For a player going in the first-round of real fantasy drafts, you can’t pass that up.

Leonard Fournette saw five touches in Week 1 one and 10 touches in Week 2. Like Gordon, I’d consider him a lock for double-digit touches again in Week 3. Also like Gordon, that’s essentially impossible to pass up in a preseason game given the talent.

John Kelly has been dominating in the preseason for the Rams. With Todd Gurley not playing at all this preseason, Kelly has seen 31 rushing attempts — more than every other Rams running back combined. Kelly has posted a line of 31-133-1 with those touches, and he’s added four receptions as well. He probably won’t get the start, but he should be in line for another healthy dose of work.

Julio Jones isn’t expected to play, which means we should get another good look at rookie Calvin Ridley. Ridley posted a line of 3-49-1 on six targets last week, and he also returned two kicks. Those return yards don’t do anything in DFS, obviously, but the slim chance at a return touchdown doesn’t hurt.

DeVante Parker isn’t catching footballs and Kenny Stills didn’t return to practice until Thursday. This scenario opens the door for a big outing from Albert Wilson. Through the first two preseason games this season, Wilson ranks tied for 11th with nine targets. He has caught seven of them for 70 yards (he dropped the other two).

Taywan Taylor exploded in Week 2 with four catches for 95 yards and two scores, including a 47-yard screen play that results in a touchdown. He’ll be on everyone’s radar, and it’s tough to keep him out of lineups if you’re making multiple. I’ll also be considering Corey Davis, who hasn’t done anything noteworthy this preseason, but should be extremely low owned given Taylor’s situation. Davis played 11 snaps in last week’s game, in line with the starters (Marcus Mariota played 12). Mariota should play most of the first half; don’t be surprised if Davis does as well.

Jack Doyle saw four targets in the first half of last week’s game — all from Luck. Considering Luck is expected to play the first half again this week, I like Doyle’s chances of seeing healthy target volume once again. So far this preseason, he has three catches for 41 yards on five targets.

Mark Andrews will be Baltimore’s primary receiving tight end with Hayden Hurst sidelined with a foot injury. This gives Baltimore a great opportunity to give Andrews an extended look for receiving work. Nick Boyle is also on the radar, but he’s more of a blocker; over the last two games, Boyle has been in on eight pass snaps, versus Andrews’ 26.