The NFL's easiest and most difficult remaining schedules

With 10 weeks of the season in the books, a decent amount has been more or less determined. The San Francisco 49ers, New Orleans Saints, Green Bay Packers, Minnesota Vikings and Seattle Seahawks are very likely to make the NFC playoffs, while the New England Patriots, Baltimore Ravens, Houston Texans and Kansas City Chiefs would have to really collapse to not at least make the AFC tournament. For other teams (like the Philadelphia Eagles and Dallas Cowboys), the remaining schedule might be the difference-maker in terms of who wins a division or who gets the final wild-card berth. Using the machine learning capabilities of AWS, which helps build our PFFELO metric, we discuss the five hardest and five easiest schedules in the NFL for the remaining seven weeks. 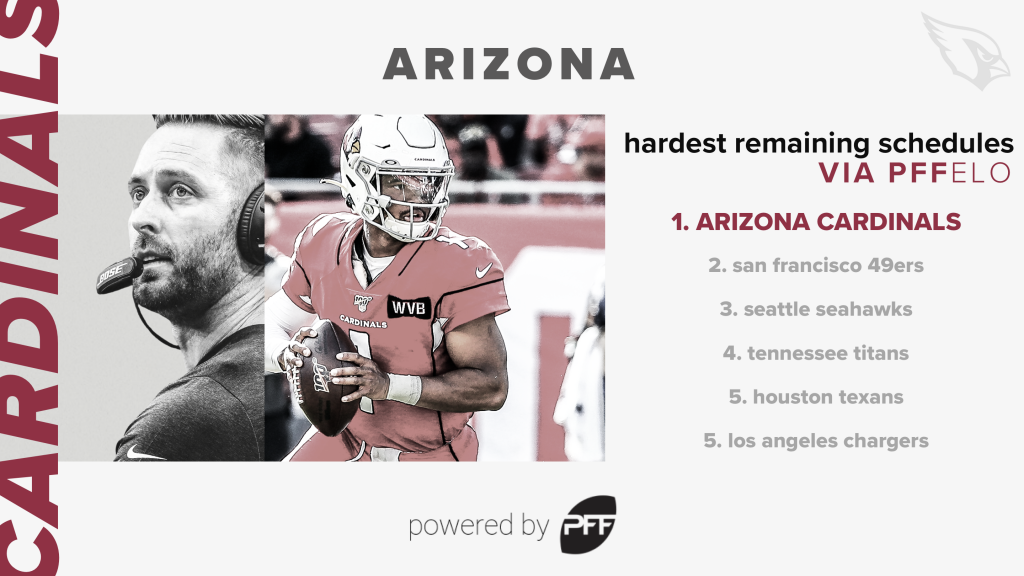 The Cardinals have the difficult position of being a breather for division foes like San Francisco and Seattle as they face their stretch runs in 2019. A couple of hard-fought, one-score losses over the last two weeks have likely extinguished any playoff hopes Arizona had under new head coach Kliff Kingsbury and rookie phenom Kyler Murray. Murray has been very encouraging through the season’s first 10 games, limiting turnover-worthy throws to under two percent of his passes. A solid showing against this slate would go a long way towards a bright future for the Cards.

The 49ers suffered their first loss on Monday night, and it came against their first good opponent. After another division game against the Cardinals, the slate gets gnarly with three straight games against top-seven opponents (Packers, Ravens and Saints). Their Week 12 matchup with the Packers is now on Sunday Night in primetime, and from now on, the 49ers are sure to be scrutinized more intently with each performance. There is a decent chance that the Week 17 matchup in Seattle is for the NFC West title.

Speaking of the NFC West, the Seahawks began a tough stretch with a huge win in San Francisco that now sets them up for a chance to win the division at the end of the season at Century Link. The Seahawks have three more games against teams that currently rank in the top-10 in PFF ELO, with the Vikings leading that group at number six heading to Seattle in three weeks. The Seahawks have both a bye and the NFL’s MVP to help them during the stretch run, though the health of Tyler Lockett is a concern.

While the Titans have made supporters of the UNDER 8 season win total a little nervous the last four weeks, things don’t get particularly easy for Ryan Tannehill and Tennessee, as they face the Houston Texans and the New Orleans Saints a combined three times in their final three games, meaning games against the plucky Jaguars, Raiders and Colts are basically must-win if they want to secure a winning record and any chance of a playoff berth in a weak AFC.

Week 11’s marquee matchup pits two of the NFL’s most valuable players against each other when the Texans travel to Baltimore to face Lamar Jackson and the fourth-ranked Ravens. This week begins a stretch that will go a long way in determining if the Texans are serious Super Bowl contenders. After Baltimore, the Texans face the division rival Colts followed by a trip to New England on Sunday night in Week 13. 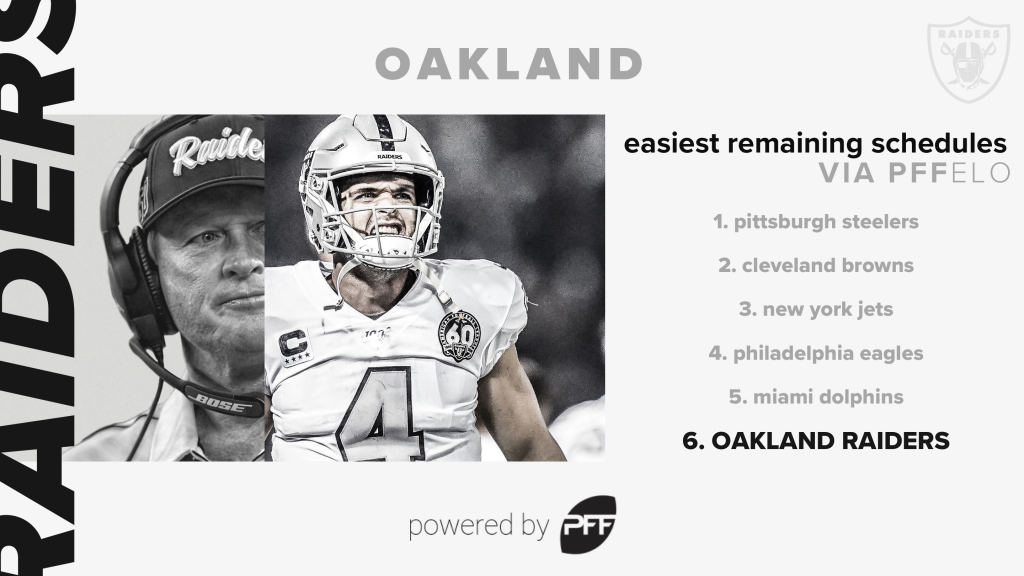 Part of the reason we liked the Steelers coming into the year was that their schedule was relatively easy compared to other AFC foes. While their Week 17 matchup against the Ravens in Baltimore is not likely to be for the division title (we give them about a 12% chance of winning the division), their next three (two with Cleveland, one with Cincinnati) could put them in a prime position to run by the Raiders and secure the conference’s sixth seed despite their 0-3 start.

If there was a team that needed one of the easiest schedules, it is the poor Cleveland Browns. Whether two games against the Cincinnati Bengals, the worst team in the NFL, and a visit from the not-as-bad Dolphins is enough of a bounty for Freddie Kitchens to turnaround the bad taste he’s fed Browns fans so far this season is yet to be seen.

It’s unclear when the Jets will hang their banner for beating the Giants last week, but they have some fairly easy games to pick from going forward. They will have the Redskins, Bengals and Dolphins while only facing one top-15 opponent down the stretch. There is a great opportunity for Darnold to give the J-E-T-S some hope going into 2020, can you hang a banner for having an offseason full of hope?

The Philadelphia Eagles have crept back into a little over a 46% chance to win the NFC East, despite being behind the Dallas Cowboys due to a tiebreaker and largely sleepwalking through their first nine games. However, their easy schedule, along with Carson Wentz’s rate of generating positively graded throws (30% of his dropbacks), could make Week 17’s showdown in Philadelphia a meaningful one for the Birds.

We were mostly joking when we said that the OVER 4.5 wins was in play for the previously-perceived-to-be-tanking fish from Miami. However, the Dolphins do have a bevy of winning games coming up, with the Browns, Jets, Giants and Bengals up in the next six weeks. They also get a New England team in Week 17 that might be resting starters. With Ryan Fitzpatrick better than expected this season, especially early in games, look out for the fish.