The Carolina Panthers shore up the front end of their defense, come away with an excellent 2019 NFL Draft

Making his second first-round selection since reclaiming the Carolina Panthers general manager's job, Marty Hurney looks to have nailed it once again with his selection of Brian Burns, an edge defender out of Florida State after he selected D.J. Moore in the first round last year, who went on to lead all rookie receivers with a 73.7 receiving grade in 2018.

Burns is a special athlete who possesses a bend (and a spin move) that can win on the outside against anybody. Among 47 draft-eligible FBS edge defenders who rushed the quarterback at least 300 times last season, he ranked second with a 90.6 pass-rushing grade and his 19.7% pass-rush win rate ranked fifth. The former Florida State star ranked 14th on our Top 250 Big Board, with Carolina taking him two spots behind there at 16. 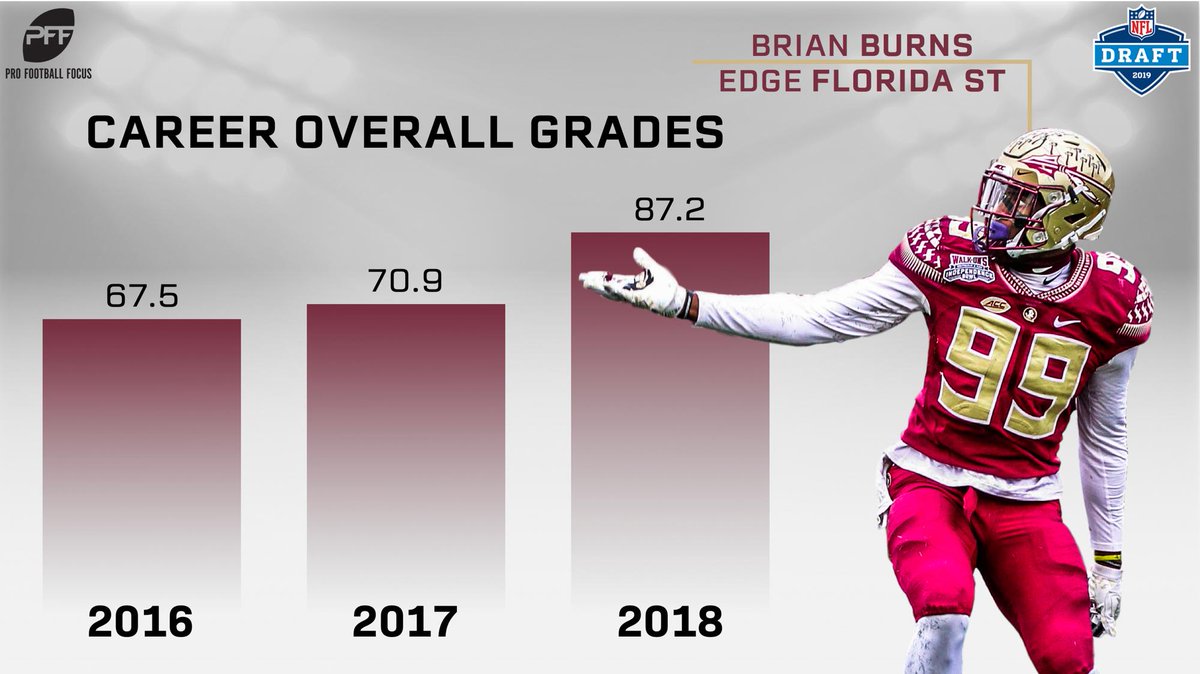 The edge was clearly a focus for the Panthers who later went on to spend their fourth pick of the draft (pick 115) on former Alabama edge defender Christian Miller. Miller is a raw prospect (having played fewer than 700 defensive snaps over the course of his entire collegiate career), who was just outside our top 150 on the big board at 155, but he offers potential as a pass rusher. Miller ranked 18th among all FBS edge defenders who had at least 200 pass rush snaps in 2018 with a 79.7 pass-rushing grade, and his 22.7 pass-rush win rate ranked sixth among that group.

Carolina ranked 25th as a team last season with a pressure rate of just 19.7% generated from their edge defenders. Spending a first-round pick on a stud like Burns and a fourth-round pick on an upside player like Miller at such a critical area of the field made complete sense for the Panthers. 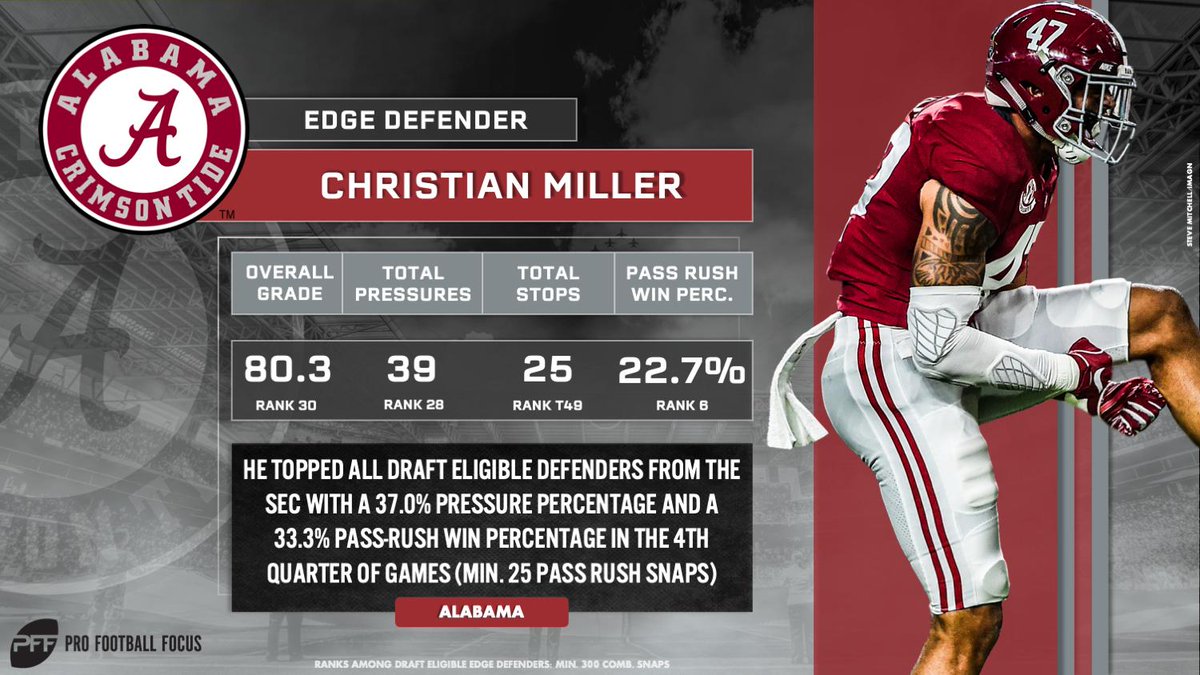 With their second-round pick, they nabbed Greg Little, an offensive tackle out of Ole Miss. Over the past two seasons, Little allowed just 27 total pressures across 993 pass-blocking snaps, and over that stretch, he led all draft-eligible SEC tackles with an 87.4 pass-blocking grade. Little slotted in at 34th on our big board and he should have the opportunity to “ease” his way into the league as a swing-tackle before ultimately finding a long-term home protecting Cam Newton’s blind side.

With the 100th overall pick, the Panthers grabbed Will Grier, a quarterback out of West Virginia who ranked 24th on our big board (46 spots ahead of Daniel Jones, whom the New York Giants spent the sixth overall pick on). Grier finished 2018 as our second-highest graded draft-eligible FBS quarterback with a 91.1 overall grade, and he tied with former Missouri QB Drew Lock with an NCAA-leading 33 big-time throws. Grier is loaded with upside as a developmental backup for Cam Newton. 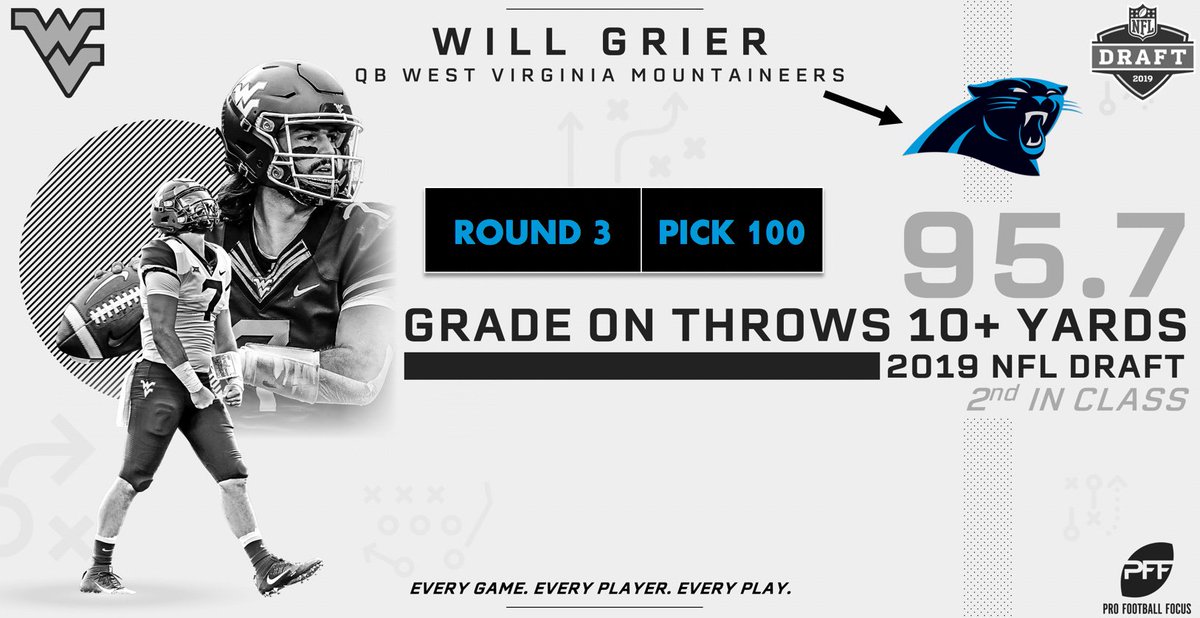 Carolina added Jordan Scarlett on Day 3, a running back out of Florida (148th on our big board, taken 154th overall) who put up the fourth-best rushing grade last season among this draft class (86.4) and should complement Christian McCaffrey nicely as a thumper in the Panthers’ backfield. When it was all said and done, the Panthers compiled one of our favorite draft classes of 2019.