It seems a long time ago that the Kansas City Chiefs were the league’s top-scoring offense, with explosive plays from all angles and a quarterback in Alex Smith that was garnering MVP talk. The Chiefs were the NFL’s last undefeated team and were running away with the AFC West, but now they have lost three-straight games and five of their last six. The offense is sinking into quicksand, and a division that was once well in hand now looks dangerously close to slipping away.

So what is wrong with the Chiefs offense?

The first and most obvious answer is Alex Smith. That early season dominance was built on the foundation of Alex Smith looking like a totally new quarterback of the version we have seen in the past. He had improved in overall quality, but also changed his style of play.

In the past, Smith has been pathologically conservative. He had the league’s lowest average depth of target for three straight years to begin his Chiefs tenure, and had the second-lowest last season, trailing only Minnesota’s Sam Bradford, who was on a mission to get rid of the ball as soon as humanly possible because of having one of the league’s worst pass blocking lines in front of him.

Smith also ranked in the bottom three in terms of deep ball percentage in each year as quarterback of the Chiefs. The highest rate of those years was last season at 9.4 percent, but his average before this season was 7.8 percent, which would rank last in two of the past four seasons. 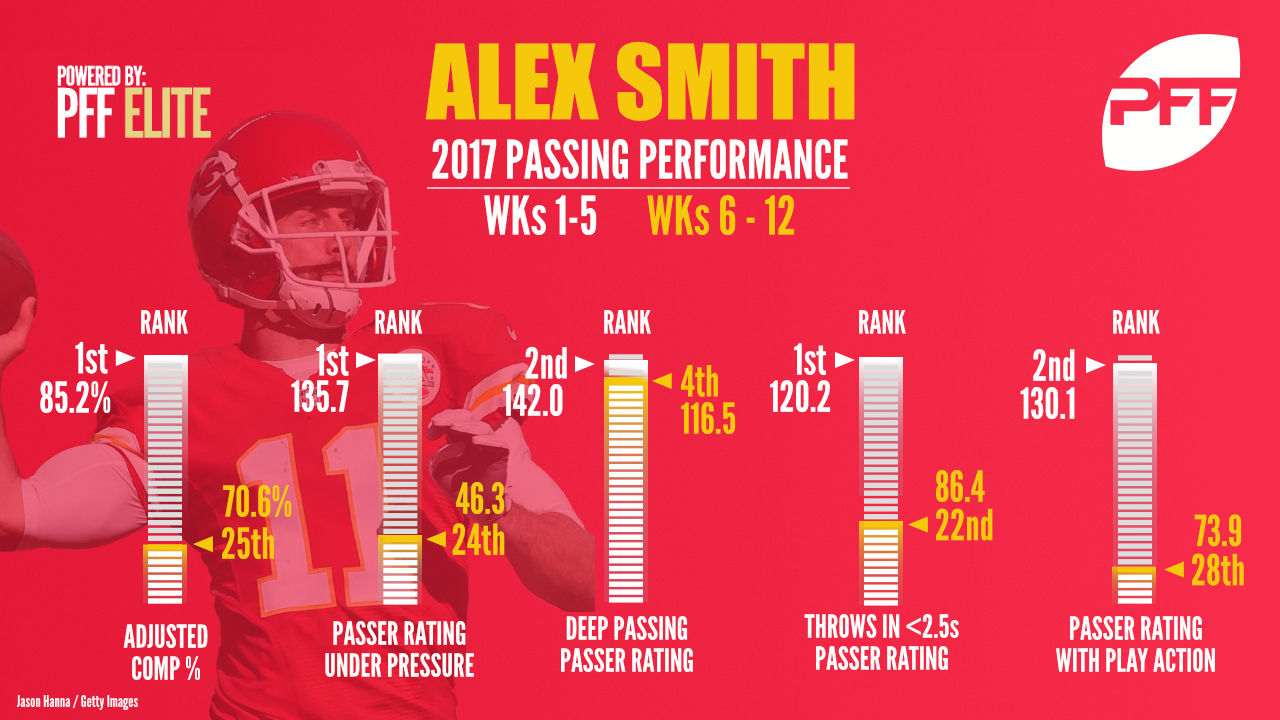 To start this year, Smith wasn’t just playing better, but he was demonstrably more aggressive with the football. Over the first five weeks of the season his deep passing percentage was 12.0 percent, which is still some way short of the league-leader (DeShaun Watson at 19.3 percent), but put him middle of the pack for a change. He hadn’t become a down field passer, but for once he wasn’t on his own at the bottom end of the scale.

On top of that, he was incredibly efficient when he did go deep, and had a passer rating of 142.0 on deep passes over the first five weeks of the season. Since that point, Smith has actually remained relatively aggressive. His deep ball percentage has dropped a little (10.4 percent since Week 5), but that is still the highest figure he has posted in Kansas City by some margin, and his average depth of target has barely moved.

Over the Chiefs’ undefeated streak, Smith ranked No. 1 or 2 in adjusted completion percentage, passer rating under pressure, passer rating on quick passes and passer rating using play action. Now the highest he ranks in any of those categories is 22nd. 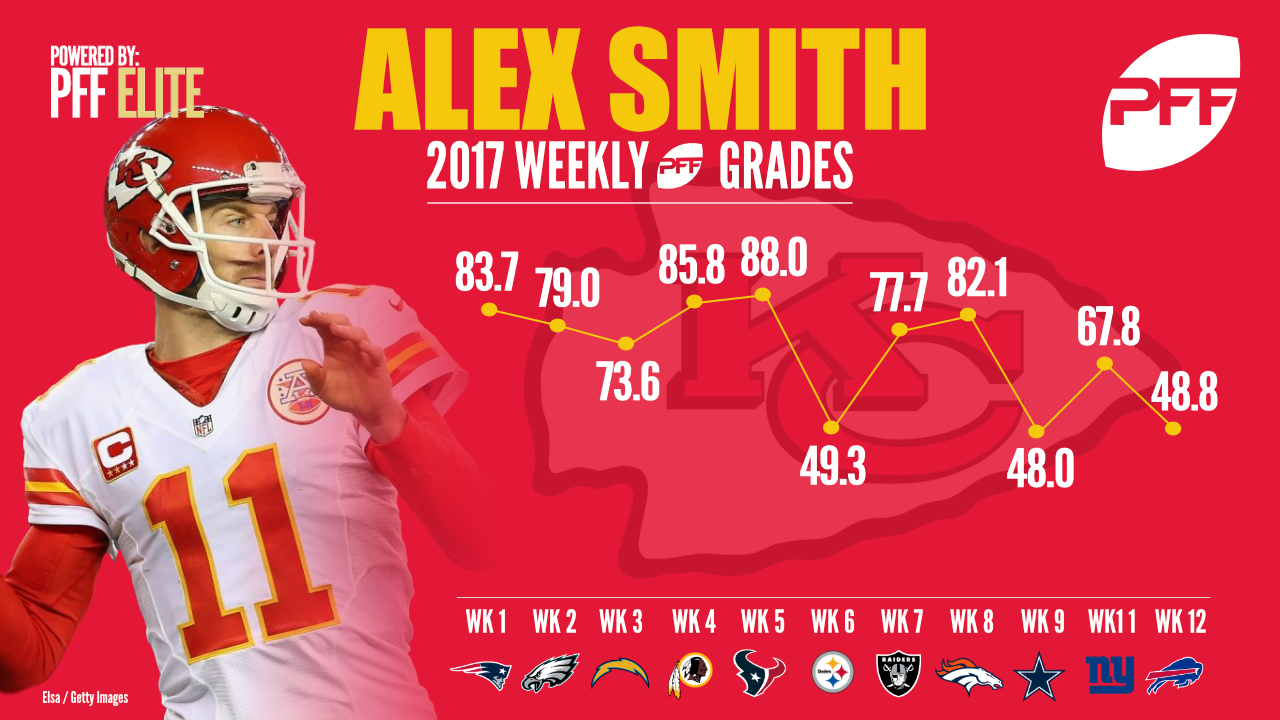 The lowest overall PFF grade Smith had early in the year was 73.6, but he has been under 50.0 in three of the past six games.

Ironically the only area in which Smith’s numbers have remained good are on the deep ball, where he has still had the league’s fourth-best passer rating and for the season trails only Matthew Stafford overall for the entire season.

As a whole, the Chiefs woes don't rest squarely on Smith, as the offensive line hasn’t been able to open the holes they were earlier in the season and it’s caused a major drop in production from rookie running back Kareem Hunt. While Hunt is still doing all he can, the running lanes just aren’t there. Even since Week 6, Hunt leads the league in broken tackles with 33, and is averaging 2.81 yards per carry after contact, which ranks 10th. Hunt could probably stand to receive a higher workload, but the issue there isn’t that he is hitting a rookie wall, it’s that he is hitting an actual wall of bodies at the line of scrimmage.

Smith hasn’t been the only problem, but he has been by far the biggest, and unless he picks up his play back to that early part of the year, the Chiefs are in deep trouble.