It has been some time since the heralded New England Patriots dynasty has faced this many offseason questions. Will quarterback Tom Brady finally begin to lose the battle with Father Time? Can Bill Belichick overcome the loss of another star pass-rusher? How will the retirement of tight end Rob Gronkowski affect the offense? Not to mention that the 2019 NFL season will be the third straight year where there will be a new left tackle protecting Brady’s blind side.

However, the biggest uncertainty may be the depth, or lack thereof, of playmakers in the wide receiver room, though it has been a problem that Brady has had to face before. In the early 2000s when the Patriots first began their dynasty run, Brady was targeting the likes of David Givens and David Patten, both of whom failed to eclipse 900 receiving yards in a season. With only Troy Brown — one of Belichick’s original gadget players — being the only wide receiver to earn 1,000 receiving yards prior to the team’s record-setting 2007 season. 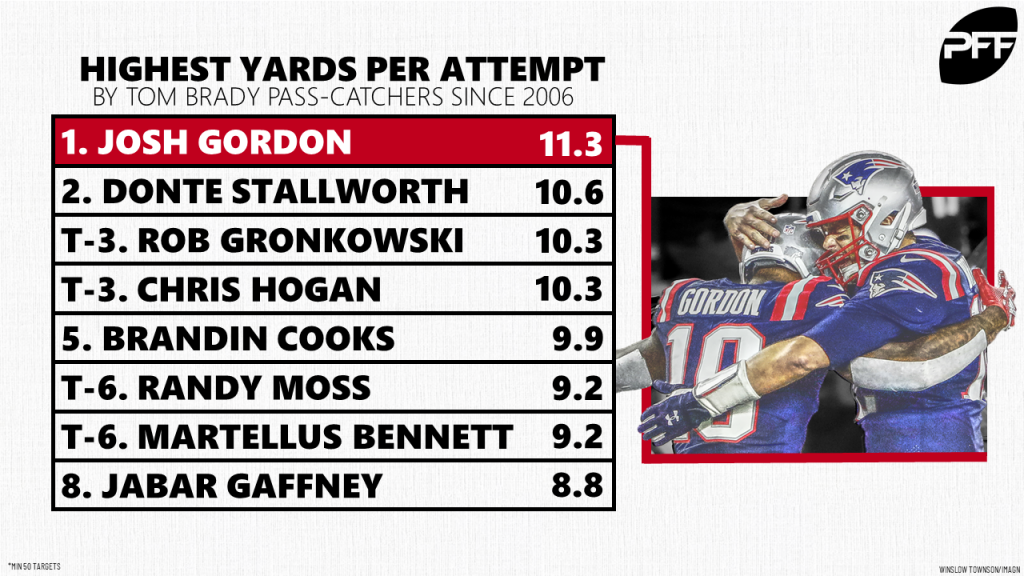 Fast forward just over a decade and the Patriots will enter a regular season for the first time in nine years without the ever-dominant tight end Rob Gronkowski, who is arguably the best pass-catcher of his generation. Imposing his will as soon as he stepped on the field, Gronkowski used his size and athleticism to dominate as the ultimate mismatch weapon for Brady to look to. The two combined for a passer rating of 129.6 on the field in the regular season, the highest of any duo in the PFF era (min 300 targets).

Fittingly enough, Gronkowski’s 29-yard grab in the closing moments of Super Bowl LIII was the final reception of his professional career, and his departure from the spotlight undoubtedly leaves Brady without one of the greatest skill position players to ever play the game.

That leaves Brady with the reigning Super Bowl MVP, Julian Edelman, as the most familiar receiver on the team. Since becoming a fixture in the Patriots' offense in 2013, Edelman stamped his authority on the ever-important slot position. During his time in the league, Edelman has seen 324 of his targets come from the slot position compared to 281 from an outside alignment, and over the past three years, Edelman ranks first among the 45 wide receivers with at least 500 routes run from the slot in receiving grade (86.2), while he ranks second in yards per route run (2.43) and fourth in explosive plays (41).

That means the slot position in good hands for Brady, but it still leaves the outside position bereft of a proven playmaker. That is something Belichick realized at the beginning of last season as Edelman served his four-game suspension. The combination of Chris Hogan, Phillip Dorsett and Cordarrelle Patterson was having a lackluster impact in Edelman's absence, which led the team to send a conditional fifth-round pick to the Cleveland Browns for wide receiver Josh Gordon.

Gordon has had his fair share of trouble throughout his time in the NFL, but his talent is undeniable, which is why the Patriots felt comfortable with the risk that came with him. Back in 2013, Gordon led the league in receiving yards (1,646) and finished among the top five in yards per reception (18.9), yards after the catch (633) and explosive plays (43) in only 14 games. 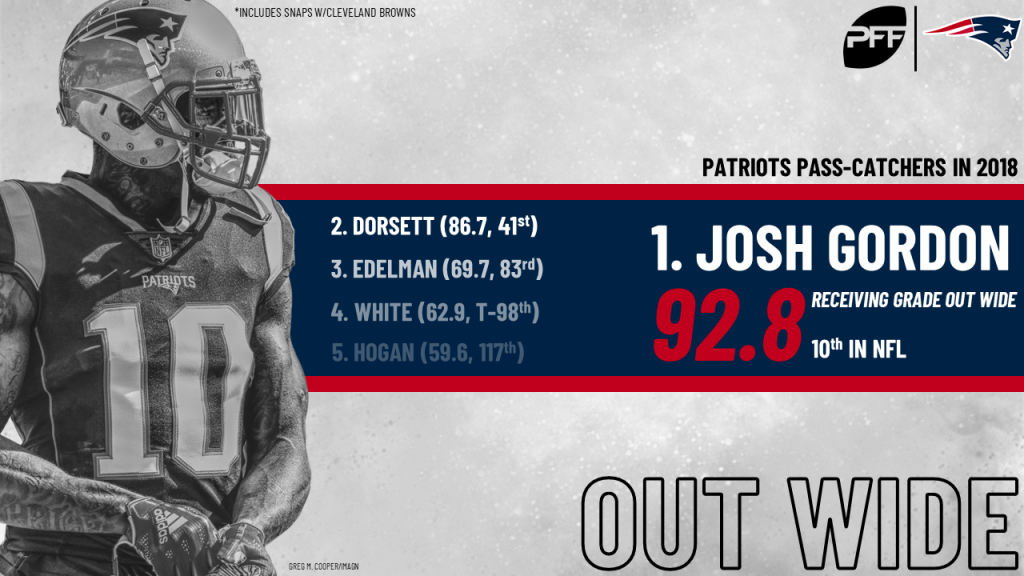 Despite his past mishaps, Gordon showed up and was ready to add a much-needed playmaker out wide for the struggling New England offense. Brady earned a 69.1 passing grade in Weeks 1-3 without either Edelman or Gordon on the field, 19th-highest. Luckily, the cavalry arrived in Week 4 with both returning to the field, and from then on Brady’s passing grade sky-rocketed to 89.0, the fifth-best mark in the NFL.

In the short time together, the Brady-to-Gordon connection resulted in 11.3 yards per attempt which is still the best mark by a Brady-to-receiver duo in the PFF era, beating out notable combinations like Brady to Gronk (10.3) and Brady to Moss (9.2).

There is no denying the impact Gordon had on the offense even in his short time there, that was evident by the yards per play difference. The Pats offense used play action 31.7% of the time in 2018, the second-highest rate in the NFL behind only the Los Angeles Rams. With Gordon, the Patriots offense averaged 10.3 yards per play (T-1st) with play action compared to the 7.5 yards per play in games without Gordon in 2018 (17th). Of all New England's wide receivers, Gordon earned the highest receiving grade on play-action plays (83.8) while earning the most receiving yards (354) and second-most explosive plays (11). Gordon also reeled in as many contested catches on play-action passes (3) as the rest of the side's wide receivers combined. 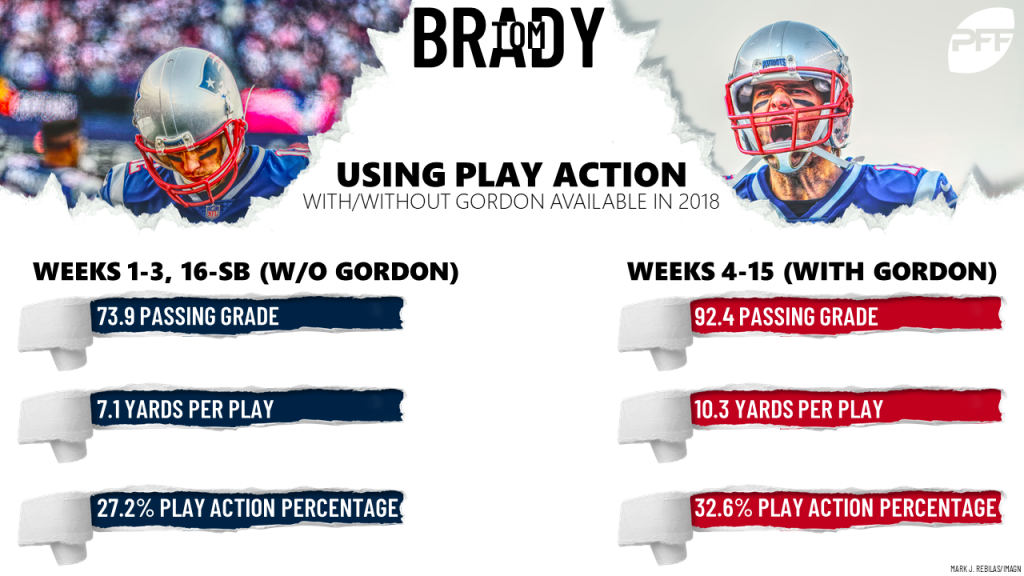 Another area where Gordon stood out among the rest of the Patriots wide receivers was as a presence out wide. Even though Gordon lined up out wide only 129 times for the team (fifth-most), he led the team by a mile with a 92.5 receiving grade from the outside in 2018. Despite his ‘lack' of playing time, the former Baylor Bear was still able to lead the team in receptions (39), receiving yards (645), explosive plays (21) and passer rating when targeted (117.4) from his snaps out wide.

Gordon’s lead on the rest of the team was so large that he still leads in each category after adding in the postseason run as well. Throughout his career, Gordon has thrived out wide, earning the 18th-highest receiving grade since 2012 (95.1) when lined up outside the hashes.

The Patriots ultimately looked to add options in the receiving corps with Demaryius Thomas, a veteran coming off a serious torn Achilles injury, and N’Keal Harry, a rookie first-round wide receiver out of Arizona State, this offseason. With the retirement of Gronkowski, and Edelman entering the season at the ripe old age of 33, the offense will have its fair share of questions.

There is a reason to hope for Gordon's return, albeit cautious, as the team enters training camp. The Patriots have shown their feelings on the matter by signing Gordon to a one-year contract this offseason, and if he's able to return to the field, Gordon can provide the outside, big-play threat to compliment Edelman’s slot dominance — a similar partnership to the Moss/Welker pairing of years past.