Week 15 NFL Team of the Week 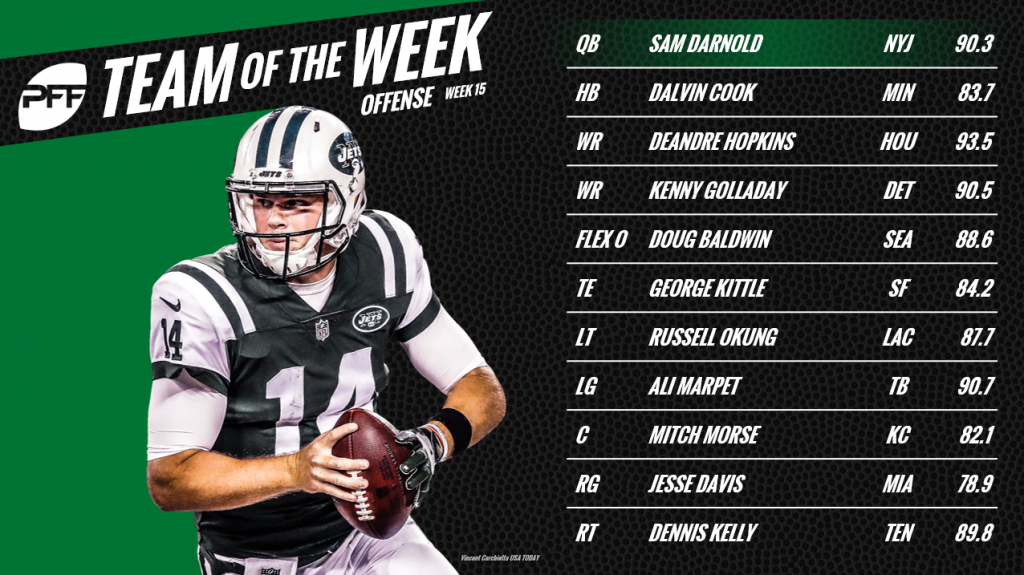 The Jets aren’t making the playoffs in 2018, but as they look to the future, this performance by the third overall selection in the 2018 NFL Draft is something for the fanbase to get excited about. Darnold was excellent on throws traveling between 10 and 19 yards downfield, going eight-for-11 for 137 yards with two touchdowns and no interceptions.

Cook forced eight missed tackles on 19 carries on his way to a 136-yard performance against the Dolphins. Five of his carries resulted in a first down or a touchdown, while he averaged 3.8 yards after contact per carry.

Hopkins was targeted 11 times in the Texans' win over the Jets, and the performance really did have it all. Nine of his 10 receptions resulted in a first down or touchdown, with Hopkins racking up 170 yards, two scores and averaging 4.85 yards per route run, the second-best mark among receivers with at least 20 snaps in route this week.

The reason Hopkins ranked second in yards per route run this week is because Kenny Golladay was even more productive on a per snap basis. From 28 snaps on the field as a receiver, Golladay pulled in seven grabs for 146 yards, averaging 5.21 yards per route run.

This was a quiet week by Kittle’s standards, with just three receptions for 51 yards. That was still in the top 10 among tight ends this week though, and his work in the run game made up for it, as he delivered his second-highest graded game of the year as a run blocker.

After missing a week through injury, Baldwin delivered his best performance of the year so far in the loss to the 49ers. All four of his receptions resulted in a first down or a touchdown, with the former Stanford Cardinal forcing a missed tackle too.

Okung wasn’t perfect in pass protection, allowing two hits and a hurry from 50 pass-blocking snaps in the win over the Chiefs. He more than made up for it with some dominant work as a run blocker though and produced a 91.5 run-blocking grade in the game.

Marpet has been up and down in 2018, but this was by far his best performance of the season. He allowed three hurries (but no sacks or hits) from 29 pass-blocking snaps and delivered some impressive blocks in the running game on his way to a 90.8 run-blocking grade.

Another player who turned in their best performance of the year so far, Morse didn’t allow a sack, hit or hurry for the third consecutive game since returning in the Week 13 win over the Oakland Raiders. Coming on 43 pass-blocking snaps, that gave him a 100.0 pass-blocking efficiency rating.

The 2015 undrafted free agent delivered his best performance of the season for the Dolphins, with zero sacks, hit and hurries allowed from 35 pass-blocking snaps. That gave him a 100.0 pass-blocking efficiency rating which, coupled with some solid work in the running game saw him produce the top grade among right guards this week.

Kelly didn’t allow a single sack, hit or hurry from 23 pass-blocking snaps in the shutout win over the Titans, producing a perfect 100.0 pass-blocking efficiency rating. As good as he was in pass protection, he was even better as a run blocker, helping create room for Derrick Henry and the Titans rushing attack. 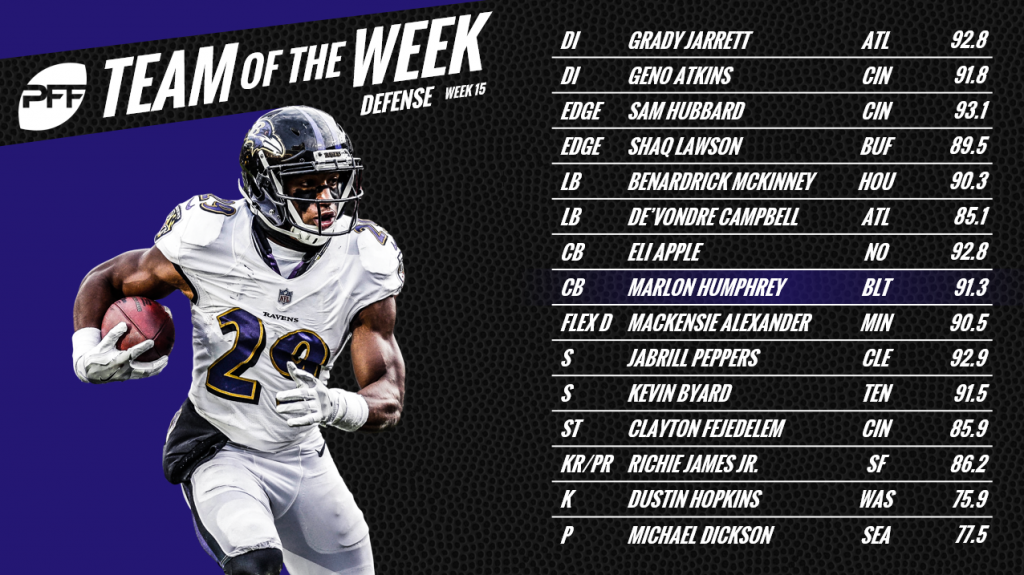 The Bengals' third-round draft pick had his best performance as a member of the Bengals, as he registered his first multi-sack performance. Hubbard finished the game with two sacks and a hit from just 29 pass-rushing snaps.

On his day, Garrett is borderline unblockable, and he gave the Arizona Cardinals plenty to remember him by on Sunday. From 31 pass-rushing snaps, Garrett racked up two sacks and four hurries and finished the game with a forced fumble and two defensive stops.

Hubbard wasn't the only Bengals defensive lineman to impress in the win over the Raiders, with Geno Atkins bouncing back to his early season form. From 31 pass-rushing snaps, he racked up three sacks and four hurries.

The Bills' third-year pass-rusher delivered his highest graded performance of the season, registering two hits and two hurries from just 16 pass-rushing snaps. He also produced a solid performance against the run, as his lone solo tackle resulted in a defensive stop.

McKinney made an impact in all areas of defense for the Texans on Saturday afternoon, coming away with a pass breakup in coverage, two hurries from three snaps as a blitzer, and he also finished the game with four defensive stops.

Campbell was deployed as a blitzer five times by the Falcons in their win over the Cardinals, and he came away with a sack, hit and a hurry. Coupled with some solid work against the run, and a stingy performance in coverage (he didn't allow a reception from the one play where he was targeted), his day was enough to push him on the PFF Team of the Week.

The Ravens' second-year cornerback is fast becoming their most important player on defense and, after struggling through injury last week, he rebounded with the best performance of his young career. Targeted six times in coverage, he allowed two receptions for just 13 yards and came away with an interception and two pass breakups. By the end of the game, he had allowed an NFL passer rating of only 2.8 on throws into his coverage.

Eli Apple has struggled since arriving with the Saints, but put those struggles behind him to deliver his best performance of the year so far. Targeted six times in coverage, he allowed an NFL passer rating of just 2.8, with two receptions for 12 yards, an interception and pass breakup.

Peppers makes the PFF Team of the Week for the second week in a row, delivering an even better performance this week than last week. Peppers had an interception in coverage and came up with a crucial sack late in the game. That sack was one of four pressures he registered from his nine snaps as a blitzer.

Byard has quietly delivered another impressive season for the Titans, with this being his highest-graded game of the season so far. He was the primary defender in coverage on two passes and allowed just one reception for six yards. On top of that, he also had an interception and pass breakup.

Alexander was targeted four times in the Vikings win over the Dolphins, allowing just two receptions for two yards. Even more impressively, the two incompletions were forced by him, with the former Clemson Tiger finishing the game with a pair of pass breakups.

Hopkins connected on all three field goal attempts, including the game-winner as the Redskins stayed alive in the race for the final wild-card spot and the NFC East title.

Delivering one of the top performances you’ll see by a punter all year, Dickson averaged 53.3 yards per punt across eight punts. Six of those punts landed inside the opposing 20-yard line, with plenty of those landing close to the sideline.

James provided the spark for the 49ers in their overtime win over the Seahawks with a huge kickoff return for a touchdown. While the focus on the play was Seattle kicker Sebastian Janikowski’s lack of effort trying to tackle him, it was an outstanding play from James to get that far and beyond.

Fejedelem played 27 snaps across kick return, kick coverage, punt return, punt coverage and field goal block units. He registered two tackles and an assist, with one of those tackles coming inside the 20-yard line.