We have been diving deep into the PFF database recently during our Teaching Month this June, and particularly focusing on run concepts and how they break down. Already, we have explored what the run concepts themselves are and taken a look at how teams defended them in 2017, but now it’s time to flip our attention to the offensive side of the ball.

For the purposes of these numbers, we have removed garbage time plays that skew and distort how teams are playing on both sides of the ball to get a more accurate reflection of how each run concept, and each team fared. 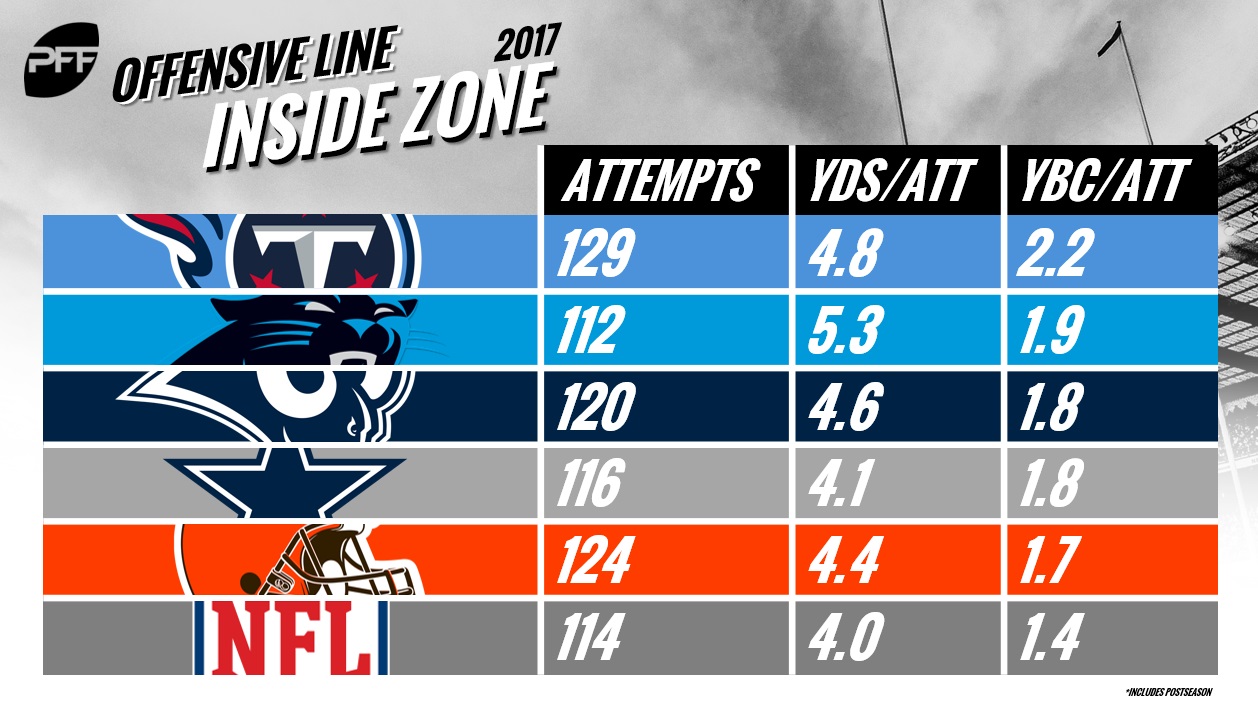 The league is a zone-blocking league in 2018. Zone-blocking systems used to be an oddity, but now they are the staple, and every offense in the league runs zone-blocking plays at some point or other, the only variance is how often.

League wide, teams used inside zone plays on 28.4 percent of their rush attempts in 2017, making it the most used run concept in football with only outside zone in the same kind of ballpark. The Jacksonville Jaguars and Minnesota Vikings ran more inside zone plays than any other team last season, but were not among the most successful teams in doing so, actually both ranked in the bottom half of the league in terms of success percentage. In terms of said success rate, the Green Bay Packers were the most productive team when running inside zone, but when it comes to yards generated before first contact, the Tennessee Titans led the way as the only team above 2.0 adjusted yards per carry. They averaged 4.8 yards per carry total on 129 carries, which was actually lower than the Carolina Panthers. Carolina managed 1.9 yards on average before contact, but were half a yard better than the Titans overall when that yards after contact was added in.

By almost any measure, the Los Angeles Rams were the league’s most successful team when it came to running outside zone last season. They averaged 1.7 yards per carry before contact and 5.6 yards per carry total with 33 explosive runs (gains of 15 or more yards), eight more than any other team. They did that despite forcing only 15 missed tackles on 146 carries for one of the lowest broken tackle rates in the league.

Elsewhere, the Alvin Kamara effect was on full display as the New Orleans Saints actually led the league in total yards per carry despite ranking fifth in yards per carry before contact. While the Rams forced just 15 missed tackles on 146 carries, the Saints' backs doubled that (30) on fewer attempts (129) for a significantly better broken tackle rate. 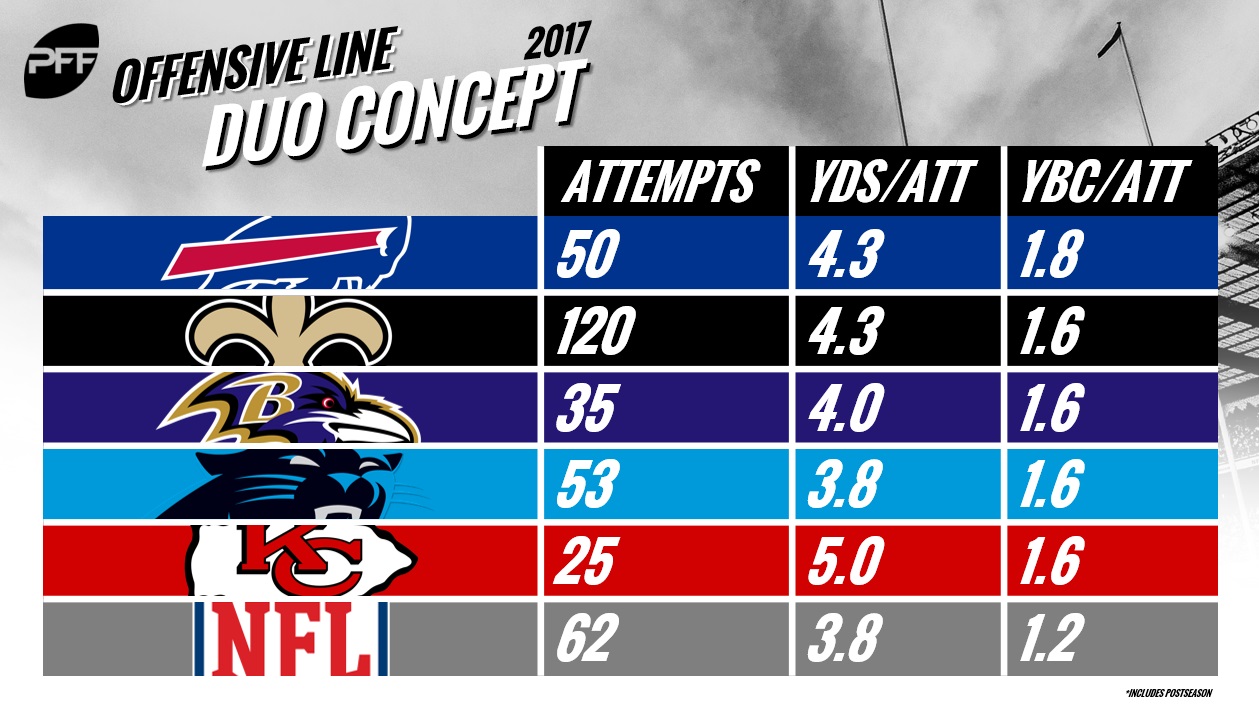 When it comes to gap concepts, or more man-blocking schemes rather than zone, duo (among its many other names) is the most heavily used in the NFL these days. When it’s run well (or run behind a powerful offensive line) it can be devastating and extremely effective, but when it’s run poorly (or the offensive line trying to execute it is a bad one), it can look like a car crash.

We are dealing with significantly smaller sample sizes than for the zone concepts as the league averaged just 62 plays classified as duo over the season and the Chicago Bears employing the concept just 12 times all year. The Bears actually averaged 6.3 yards per carry on those dozen attempts, but it was all the work of the ball carriers because first contact came at the line of scrimmage on average on those carries.

The Arizona Cardinals ran this concept the most, but averaged just 3.7 yards per carry when doing so. The team in second place when it comes to frequency on duo plays were the Saints, and they averaged 4.3 yards per carry, one of the better figures in the league. No team gained more than two yards per carry on average before first contact, but duo is often employed in short yardage and goal-line situations that tends to skew those numbers down. The Indianapolis Colts actually had a success rate of 48.0 percent when running the duo concept despite gaining an average of just 3.9 yards per carry, illustrating that those attempts were largely converting short-yardage plays.

One of the most widely-known run concepts in the game, power was run league wide just 9.2 percent of the time, but when it worked, it was extremely effective. Nine teams averaged more than five yards per carry and the league average was 4.5 yards per attempt with 1.5 of that coming before first contact.

Again, the Bears were small-sample-size studs in this particular run concept in 2017. They averaged 6.4 yards per carry on 28 power carries, leading the league in yards before contact with 2.7 on average before the back was hit by a defender. The New England Patriots were the most successful high-volume team, averaging 2.3 yards per carry before contact and 4.7 yards per carry total, but even they only ran power 67 times. Nobody ran power more than the New York Giants, who broke it out 94 times and despite struggling overall last season on the ground, were actually pretty successful when they ran power –averaging 5.0 yards per carry. 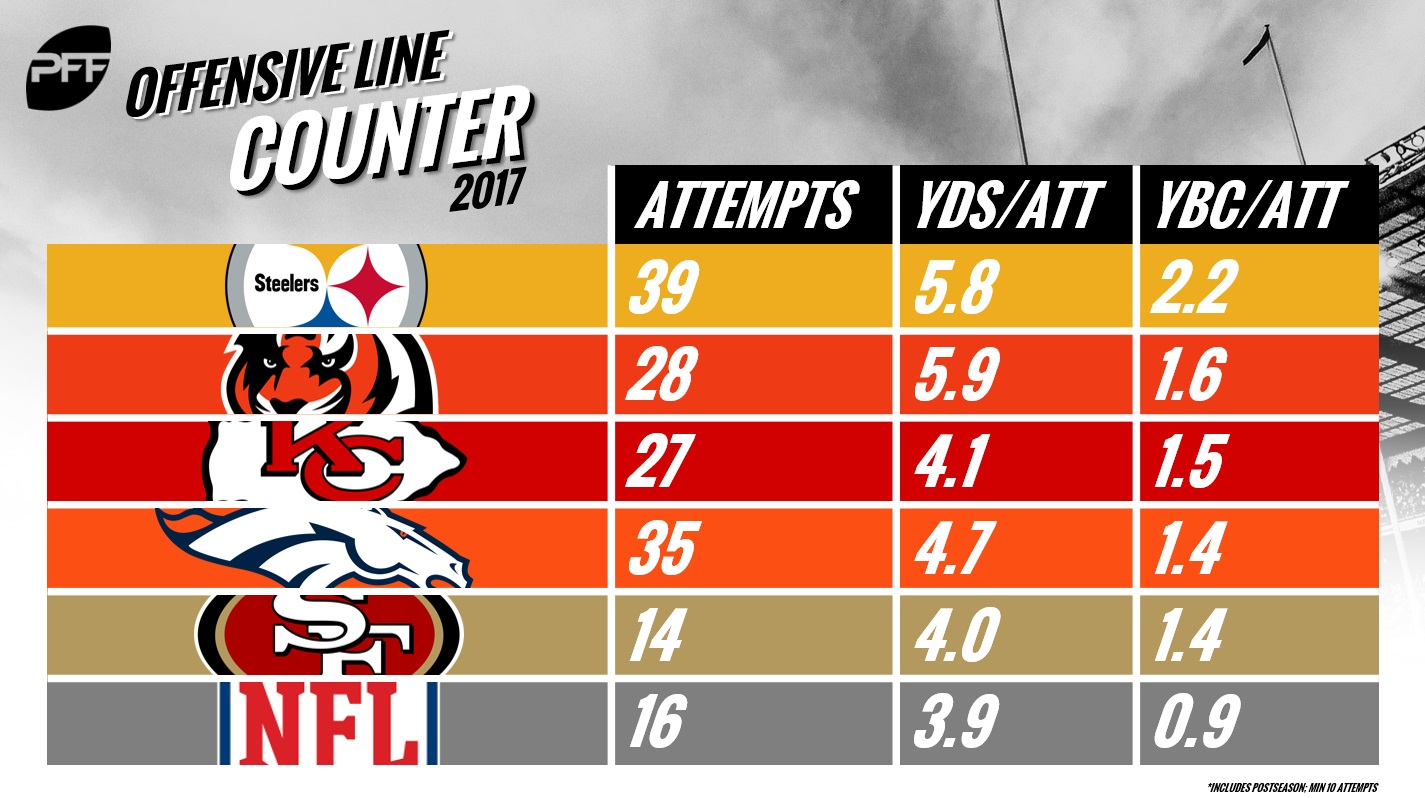 Counter is another well-known run concept, but is used more sparingly than even power as just 4.1 percent of all run plays last season were counters. No team used it more than 53 times (Carolina) and they had 14 more counter plays than any other team. The Atlanta Falcons had just one counter play all season long. League wide, teams averaged just 3.8 yards per carry when running counter and gained less than a yard per carry before first contact.

Only five rushing touchdowns were scored all season from counter plays, on 500 carries, and 125 of those rushing attempts were stuffed at or behind the line of scrimmage.

The Pittsburgh Steelers – aided by the work of David DeCastro on the move –were the league’s best team running counter, totaling 39 carries averaging 5.8 yards per carry and 2.2 yards before first contact. Nine of those 39 carries went for 15 or more yards, but nine of them were also stuffed at or behind the line. Three of the best five teams in average before contact ran counter less than 10 times all season.