PHILADELPHIA, PA - AUGUST 17: Ronald Darby #35 of the Philadelphia Eagles plays against the Buffalo Bills the preseason game at Lincoln Financial Field on August 17, 2017 in Philadelphia, Pennsylvania. The Eagles defeated the Bills 20-16. (Photo by Mitchell Leff/Getty Images)

Unlike some other positions, such as edge defender, there is no truly elite, top-end talent to be had at the cornerback position via the free agency market in 2019. That doesn’t mean there isn’t the talent to be had though, as there is a solid crop of free agent cornerbacks coming off strong 2018 seasons.

The top-10 list of those available cornerbacks begins with…

Set to hit free agency at the ripe age of 25, Darby offers consistency – he graded above 70.0 in three of his four seasons alongside a respectable 68.3 in 2016 – and upside with an overall grade that ranked 22nd out of 120 qualifiers in 2017. He has shown a knack for disrupting passes with 50 regular-season forced incompletions since entering the league, ranking 12th among all cornerbacks who have seen at least 100 targets over that span. Though coming off a torn ACL, Darby is likely the best free agent option available for cornerback-needy teams. 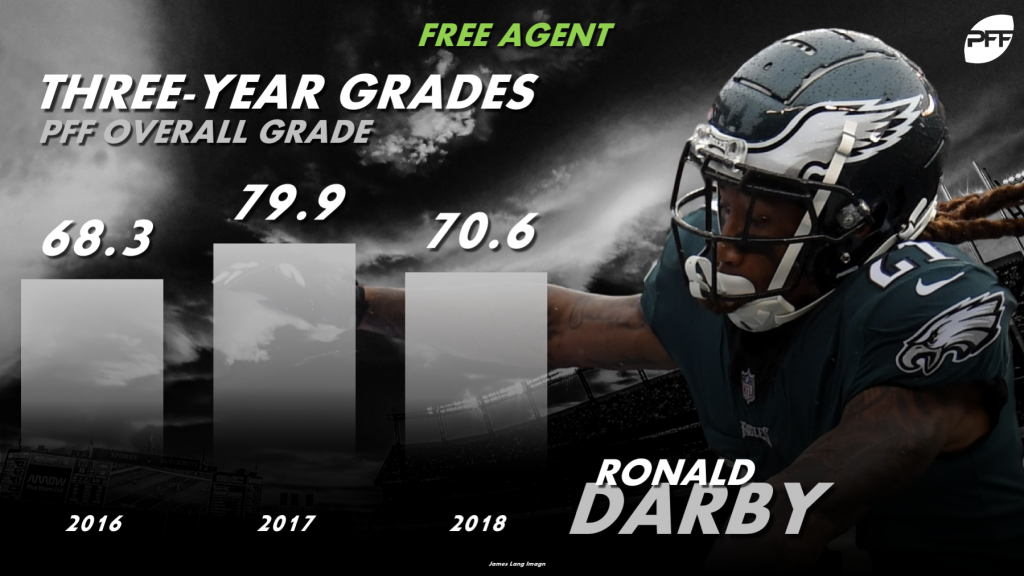 Once an afterthought, the importance of the slot cornerback has begun to come to light in recent seasons and Callahan was one of the best in 2018. He shut down the slot week in and week out, allowing just 0.69 receiving yards per coverage snap in the slot which was the fewest among the 30 cornerbacks who played at least 200 coverage snaps. Having increased his overall grade from 62.9 in 2016 to 77.7 in 2017 to 81.4 last season, Callahan is on the rise and will likely cash in on that improved play in the coming months.

One of the “elder statesmen” of the cornerback free agent class, Jackson has played at least 600 defensive snaps each season since he was drafted by the Houston Texans back in 2010. Coming off one of the best years of his career in which he recorded an overall grade of 79.5 behind 10 pass breakups and no receiving touchdowns allowed, Jackson will be one of the more sought-after veterans if he hits the market.

After a few down seasons at the end of his time with the Tennessee Titans, McCourty has revitalized his career in the last two seasons with Cleveland Browns and the New England Patriots. Of the 90 targets into his coverage this season, only 53 were completed for a completion percentage of 58.9 which ranked 34th out of 125 cornerbacks that played at least 250 defensive snaps. Though he doesn’t offer the upside of some of the younger options, McCourty offers the safety of an immediate starter that can step in on the perimeter.

No player was tested more in coverage this season than Nelson, who was targeted 113 times in total during the regular season. He responded with a career-best grade of 72.1 – making him an intriguing free agent option at the age of 26. That grade has risen each of his first four seasons in the NFL; prospective suitors will be banking on that trend of improved play continuing.

The ideal scenario is not to enter free agency off a career-worst year, but unfortunately for Mr. Roby, that is the situation he finds himself in. Roby recorded just a 59.9 overall PFF grade in 2018 while allowing a passer rating of 117.3. He finds himself on this list, though, because he has shown throughout his career that he can be an impact player in the defensive backfield. One need not look further than 2017 when he ranked in the top-five forced incompletion rates at nearly 30 percent. Any team taking a shot on Roby will be hoping that version returns for 2019. 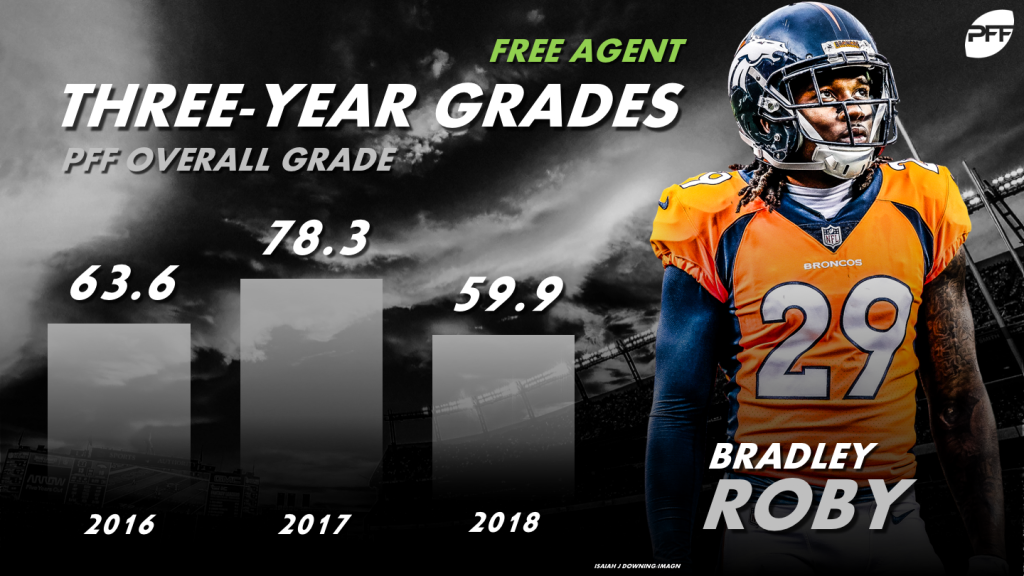 Before this season, Desir had not played over 400 defensive snaps in a season after coming out of Lindenwood. Now, heading into free agency, Desir cracks the top-10 at the position after being an integral part of a much-improved Colts defense. It’s always a risk signing a player to a long-term contract with just one year of proven production under their belt, but Desir’s 77.5 overall grade this past season will give teams reason to take a chance.

Verrett is perhaps the most interesting free agent decision for the Los Angeles Chargers and others this upcoming offseason. There is an argument to be made for him as the best option available given his very strong showings in a limited rookie season (85.1 overall grade) and his only complete season in 2015 (88.4 grade). Unfortunately, though, Verrett has only played 323 snaps since that 2015 season due to an onslaught of serious injuries. Teams will have to decide if the risk is worth the potential reward.

Claiborne doesn’t offer the upside of options such as Darby or Verrett, nor does he offer the safety level of Jackson or McCourty, but he has shown that he can be a serviceable – albeit uninspiring – option at cornerback with his play for the New York Jets over the last two seasons. His overall grade in 2018 of 62.7 ranks 75th of 112 qualifiers at the position. Seven seasons into his career, it’s unlikely that Claiborne will ever live up to his high first-round selection, but he can provide decent play for a team in the right conditions.

Similar to Roby, Melvin followed up a promising 2017 campaign with a lackluster 2018 performance that saw his overall grade fall from 77.9 to 60.5 and his passer rating allowed balloon from 60.3 to 101.6. That upside that he flashed two seasons ago, though, still makes him an intriguing option moving forward. With the Indianapolis Colts in 2017, Melvin broke up ten passes on 55 targets while intercepting another three; that kind of playmaking ability is coveted league-wide and will put him in the free agent conversation once again in 2019.