Waynes, the team's 11th overall pick of the 2015 NFL Draft, has largely failed to live up his first-round billing during his time in the league. He's yet to manage a single-season grade above 70.0, and while his 2018 mark of 69.1 is a career-best up to this point, it was still only good enough to rank 50th among qualifying cornerbacks last year.

After struggling to find the field much in his rookie season, Waynes has played at least 500 defensive snaps each year since 2016. Interestingly, the former Michigan State product has been among the top cornerbacks in the league in run defense; his 27 run stops since 2016 are second at the position to only Kareem Jackson, and his 84.5 run-defense grade this past season tied for the 10th-best marks among cornerbacks.

However, his good play in run support has been vastly outweighed by his performance in coverage, as he's allowed passer ratings of at least 90.0 for two consecutive campaigns. Among the 136 cornerbacks with at least 500 coverage snaps since 2016, Waynes' 62.8 coverage grade ranks 89th, his 88.4 passer rating allowed ranks 55th and his 13.5% forced incompletion percentage ranks 75th. 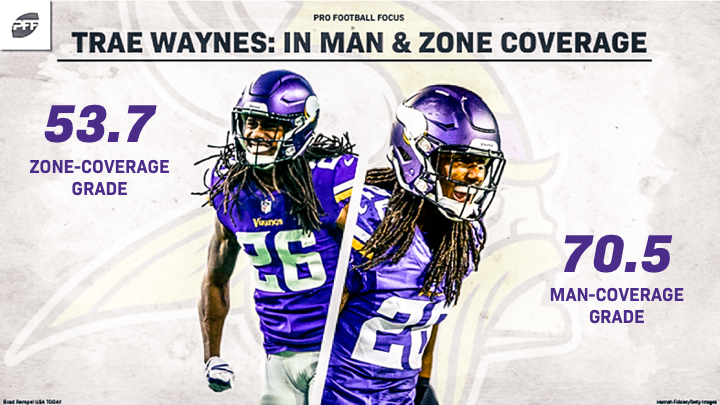 If a team is willing to surrender a mid-round draft pick and take on Waynes' $9.069 million salary cap hit, then the Vikings could very well be tempted to let him go, and after four average seasons in Minnesota, a step away may just do the young cornerback some good.